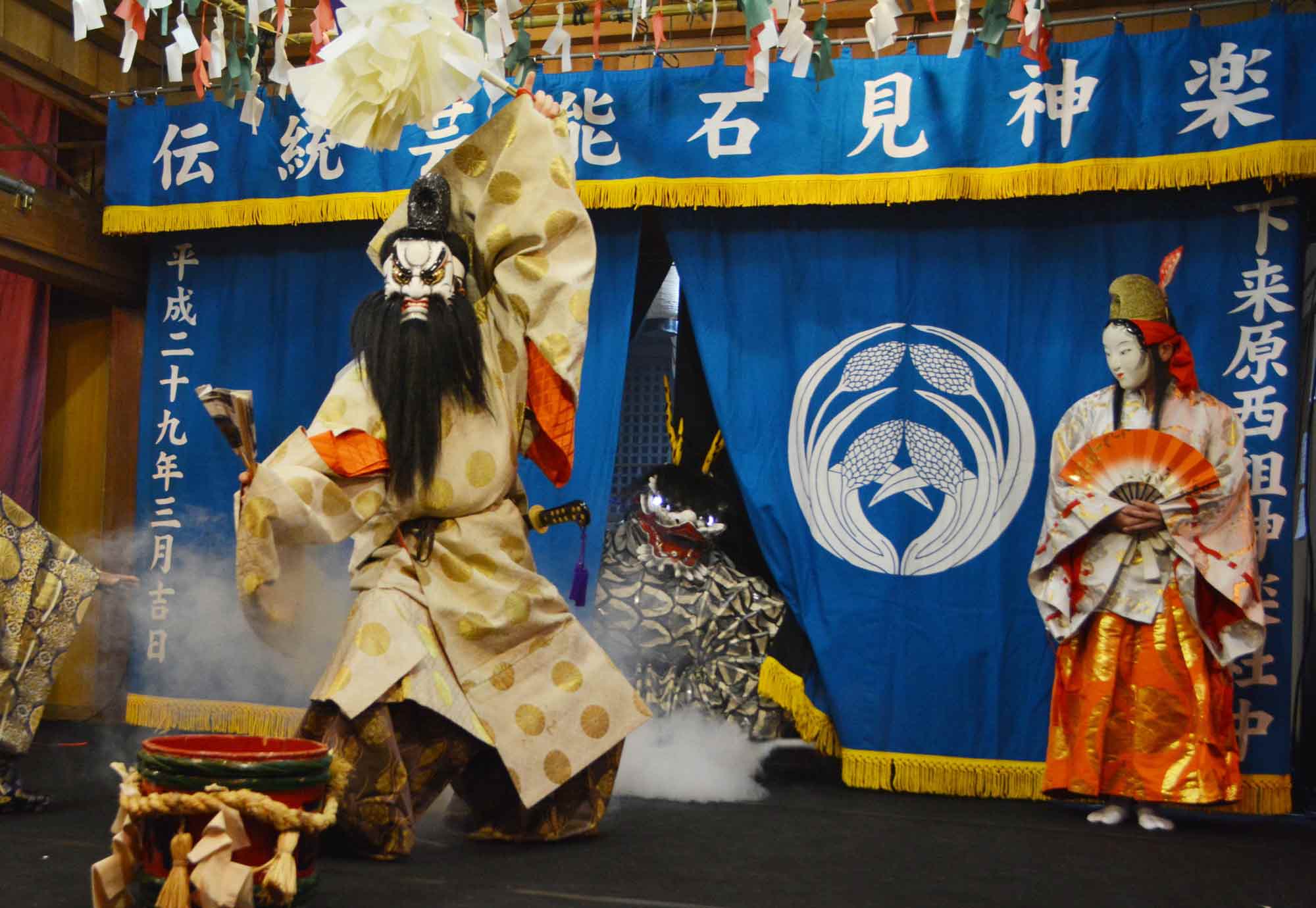 Japan is a country rich in culture and rituals that change with every new region. This makes traveling through the various areas very interesting because there is something new to learn at every place. This time, I went all the way to Shimane Prefecture, to the Iwami region to be exact, and learned about a very impressive ritual: Iwami Kagura. Let me tell you about my experiences and all the work behind this splendid dance performance.

Iwami Kagura: The History of the Centuries-Old Shinto Dance

Kagura (神楽) literally means “entertaining the gods,” a sacred dance and music ritual dedicated to the gods of Shinto. It finds its roots in ancient times. However, the origin is not accurately known. One of the working theories is that it originates in the Amano-Iwato story, one of the myths of Japan’s oldest historical record Kojiki, written about 1,300 years ago. In the Amano-Iwato story, the Goddess of the Sun Amaterasu Omikami hides behind a rock, and the gods dance and play music in hopes of coaxing her out, a story often present in kagura performances today.

Kagura has evolved and spread across Japan throughout the centuries, with each region showcasing its own unique twist to the traditional performance. Iwami Kagura is best known for its fast-paced music and dances, gorgeous costumes, and mythical stories. Many kagura performances are based on stories from the Kojiki or other early historical documents, including stories of confrontations between gods and demons.

Iwami Kagura is performed at several venues on a regular basis, mainly on weekends. I visited a performance at Sanku Shrine in Hamada City (浜田市), with performances taking place most Saturdays throughout the year. For Iwami Kagura, a stage is set up inside the shrine, considered as a sacred space. From the ceiling, a bamboo frame with zig-zag paper streamers hangs to indicate the holy section of the room.

Two stories have been performed on that night, each about 30 minutes. The first one was Jinrin (塵輪), retelling the story of the confrontation of two gods and two demons. The gods are Emperor Chuai (reign: 192-200) and his retainer Takamaro who are fighting using sacred bows and arrows. The demon general Jinrin is defeated and peace in Japan is restored. Fog is used on the stage when the demons appear. The dancers move very fast and show impressive fighting scenes — all in their heavy but gorgeous costumes.

The second story is called Orochi (大蛇), literally meaning “giant serpent”, and is one of the most well-known myths in Japan. An elderly couple asks the god Susano to save their last daughter from the giant eight-headed serpent. Susano gives poisonous alcohol to the serpent and then defeats it with his sword. The dance of the giant serpent was especially impressive on the small stage. Four dancers represented it, and all the space on the stage was filled up. Here, too, the fog was used, such as some pyrotechnics.

Seeing the dance performance inside Sanku Shrine was awe-inspiring and a great experience. However, keep in mind that it gets cold during the late autumn and winter season, so be sure to bring extra layers while you enjoy your performance.

Where to Get Behind the Scenes of Iwami Kagura Handicrafts

Certainly, there is a lot of preparation and work that have to be done before an Iwami Kagura performance is ready. I’m not only talking about studying the dances, speeches, and music but also producing the costumes the dancers are wearing. The making of these is deeply ingrained with the Iwami region. For example, Sekishu washi paper, produced in this region, is an essential element of Iwami Kagura and is used for the masks, serpent bodies, and costumes. You can learn more about the special papermaking process at the Sekishu Washi Center.

I had the opportunity to visit three places in Hamada City connected to Iwami Kagura and see how the handicrafts are made, which is a great way to understand the unique qualities of Iwami Kagura and the culture behind it.

One important element of Iwami Kagura are the masks (石見神楽面, Iwami Kagura men). The Kakita Katsuro Mask Workshop in Hamada City takes about one month to produce one mask. Masks for gods, demons, serpents, and other characters of historical stories, are made at the family business.

There are many steps behind it, such as creating the shape with clay which is then covered by gluing several layers of Sekishu washi paper. Traditionally, masks were made out of wood. However, changing to washi paper makes the masks much lighter and easier to use during the performance. Once the washi paper is dried, the clay inside the mask is broken and removed. Then, holes are burned in the mask for the eyes and hair using a hot metal stick.

After the mask’s base is finished, the next step is coloring. First, a foundation is applied, then all the details are painted with brushes, giving the masks their expressions. Because they are all produced by hand, each mask is unique.

At the shop inside the family house, you can see various masks available for sale. Customized orders are possible, though it can take 3 to 6 months to produce.

Aside from the masks, the dancers of Iwami Kagura wear costumes that are also handmade. At the Hosokawa Kagura Costume Shop, I could see the detailed work done on the single pieces of the costumes. After the costume design draft is completed, outlines are traced onto the fabric before the embroidering work. Real silver and gold threads are used to make gorgeous designs, which often show demons and serpents, and other motifs.

The parts are produced separately and then set together like a puzzle. In the end, a single costume can weigh up to 20 kilograms, so the dancers wearing this must be trained and highly skilled to move efficiently in them. Visiting a kagura costume shop is a great opportunity to take a closer look at the costumes. You can see all the single stitches for the elegant design, which is not easy to notice when the dancers are moving on stage.

A highlight for me when watching the kagura performance were the giant serpents on stage. Snake columns (蛇胴, jadou) reach a length of 17 meters and weigh about 10 to 12 kilograms. Master Ueda at the Ueda Snake Barrel Workshop, which is running in the third generation now, explained the process of producing the serpent bodies.

The snake barrels mainly consist out of Sekishu washi paper and bamboo. First, three layers of washi paper are glued around a bamboo construction. Dried, the paper has a strong texture and is mostly tearproof. After this, the barrel gets painted and later folded. The idea comes from suspension-type lanterns, so it is possible to make the snake’s body longer or shorter and move in several directions. Finally, the separate columns are attached to create one whole serpent body. The process takes about ten days to complete.

Hamada is located on the JR San-In line. It takes approximately an hour and a half by express train from Shimane’s capital Matsue. The closest shinkansen station is Shin-Yamaguchi, taking about two hours by express train to Hamada Station. Furthermore, JR buses are operating between Hiroshima and Hamada take about 2 hours. All these are included in the Japan Rail Pass.

From Tokyo, you can take a flight to Hagi-Iwami Airport. An airport bus is connecting to Masuda City, from there it takes about 40 minutes by express train.

*Non-resident visitors can ride the express bus between Hiroshima and Hamada for a special offer of 500 yen (price as for March 2022).

Iwami Kagura is more than just a traditional dance on stage — it connects people that give their heart to it. During my visit, I could feel the passion of these people and how Iwami Kagura is a part of daily life in the area.