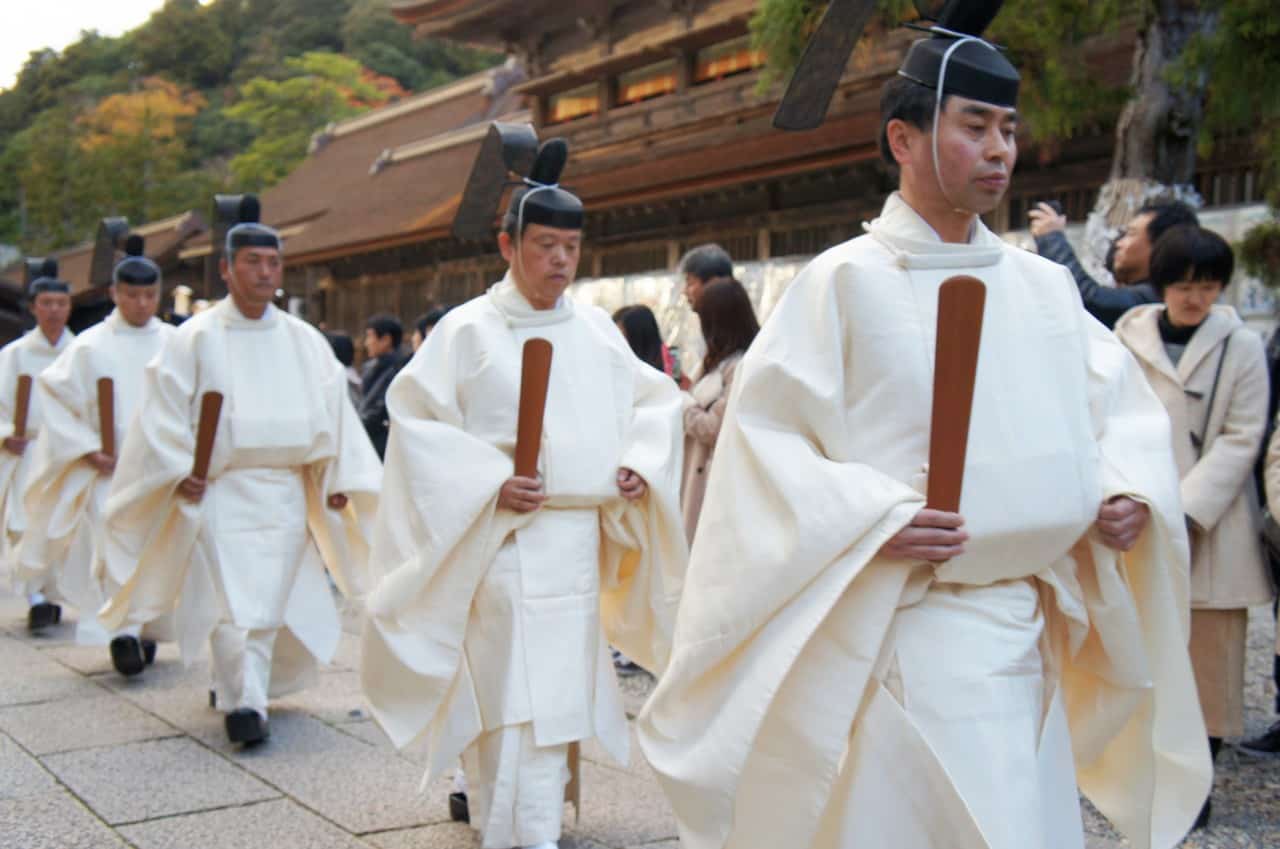 Japan is a land rich in myths, and the popular saying among  the Japanese is that 8 million kami (Shinto deities) live there. Traveling in the San’in Chuo Region, made up of Tottori and Shimane Prefectures, I could feel the presence of these deities, along with other legendary creatures like the yokai, spirits that interact with people in everyday life. During this time of the year, there is a special reason for the supernatural vibe in the Izumo Region, which is home to many Shinto sanctuaries, including one of the two largest in Japan (along with Ise), Izumo taisha (出雲大社). It is in this location that all the kami in Japan gather once a year, and I was there to experience it.

The big shrine of Izumo Taisha

Izumo Taisha is one of the largest and oldest Shinto shrines in the archipelago, which is why it is designated a National Treasure. History is vague on exactly when it was established, and its origins go back to legendary times. It is said that it was built by the deities themselves to house one of them: Okuninushinomikoto, “the creator of all that exists”, also known as the founder of Japan and the divinity of en-musubi – having power over the destiny of human relationships. Its buildings have taken various forms throughout the ages, and the current building dates back to 1744. But the notion of “old stones” is totally foreign to Shinto culture; the shrine is a spiritual place, not simply a physical construction, and this is reflected in the ritual reconstruction of the sanctuary every 60 years (though in recent times, the reconstruction of the roof is only partial, not total).

The sanctuary is vast and consists of many buildings, and is accessed by a path lined with pine trees. The center of the path is off-limits to visitors because it is the path reserved to be taken by kami.

As is the custom, the honden, the main hall which houses the deity, is surrounded by a palisade and is not accessible; the ceremonies are held in other buildings. The honden of Izumo Taisha is the tallest in Japan with its hinoki bark roof rising to 24 meters. But the legend, which has been proven by a recent archaeological discovery, claims it was once twice as high, perched on high pillars and connected to the ground by a long walkway.

Home to an en-musubi deity, Izumo Taisha is an ideal place for weddings. The kaguraden holds shimenawa sacred rope adorning the building where these wedding ceremonies are held. The rope here is one of the largest in Japan: 13.5 meters long and weighing 4.5 tons.

What makes the Izumo Taisha so sacred is that every year, during the 10th month of the lunar calendar, all of the kami of Japan meet here. This month is called Kannazuki (the month without gods) everywhere Japan except in Izumo, where it is instead called Kamiaritsuki (the month when the gods are present).

Many matsuri (festivals) in Izumo celebrate the arrival and departure of kami, so this tradition is taken very seriously by the locals here. The deities are welcomed during the Kamimukae-shinji, and the following seven days the inhabitants refrain from making too much noise to avoid disturbing them. The deities live in the jukusha, buildings with many doors which are only open when they are present.

I had the privilege of being able to attend the Karasade-sai ritual, the ceremony to celebrate the day the kami leave the sanctuary. These rituals have been performed by the same family for 84 generations, and it is said that the superior is a direct descendant from the son of Amaterasu, the goddess of the sun and supposed ancestor of the imperial family.

First, an officiant came to pick up many coins left in front of the jukusha by visitors.

Just before the priests arrived, the sky was covered with thick clouds and the thunder began to grow louder. But as if the deities had intervened, the calm returned, and the officiants came to escort the kami, hidden behind a white cloth, to the building where the ritual continued.

The crowd of spectators was dense, and unfortunately I did not see much of the ceremony that followed. The atmosphere was quite electric and the crowd of onlookers showed a great deal of respect to the traditions, even if not really believing in them.  This is how many Japanese approach these types of ceremonies; there is a respect for the history and culture these ceremonies are rooted in but as a religion, it isn’t something they have actual faith in. However, many of them waited in long queues to make an offering and pray in the many sanctuaries of Izumo Taisha.

Since the date of the ritual is based on the lunar calendar, it varies slightly each year but it usually falls in November.

More to See Around Izumo Taisha

Following the same road that the kami travel for about ten minutes on foot from the sanctuary and you will arrive at Inasanohama Beach (稲佐の浜). This is where the deities arrive in Izumo and leave from; the imposing rock standing on the beach is home to the small sanctuary called Benten-jima.

I also recommend a walk around the big sanctuary, where you find many interesting sacred places along with a rare thousand-year-old tree and an ancient fountain.

Those who are interested in Kabuki probably know Izumo no Okuni, considered to be the founder of the theater. Little is known about her, but some sources say that she was a miko (shrine virgin) at the Izumo Taisha before leaving for Kyoto, where she became famous for her dancing and performances. In Izumo, you can find her alleged tomb, though there is another that claims to be hers in Kyoto as well. There is also a statue similar to the one near the Minamiza theater in the old capital.

On the culinary side, one of Izumo’s specialty is sanshoku warigosoba. These cold soba noodles are served with three side dishes: tororo (grated Japanese yam), an onsen tamago (soft-boiled egg) and grated daikon radish. Sobadokoro Tanakaya (そば処田中屋), the restaurant recommended by the local, is right in front of the entrance to the shrine.

For more information to plan your trip to the San’in Chuo region, visit this website. Here you’ll find information on places to visit, sample itineraries, and transportation information.