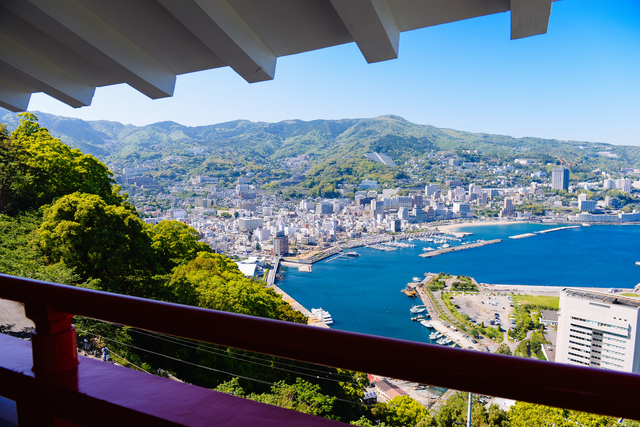 Located right where the ocean and mountains meet, Atami has emerged as a major gateway to the Shizuoka prefecture. A 40-minute Shinkansen ride separates Atami from Japan’s capital city—close enough for it to be a perfect, casual weekend getaway, but far enough to throw you into a completely different atmosphere. Favored by Tokugawa Ieyasu—Japan’s iconic first shogun from the Edo period—and his decisions, Atami’s popularity as a prime holiday destination has risen in the last four centuries. Will you miss the chance to visit this beautiful coastal city?

Come with us on a day trip to Atami! We will share a few interesting facts about the city, but you are highly encouraged to jump on a train and come enjoy Atami for yourself. 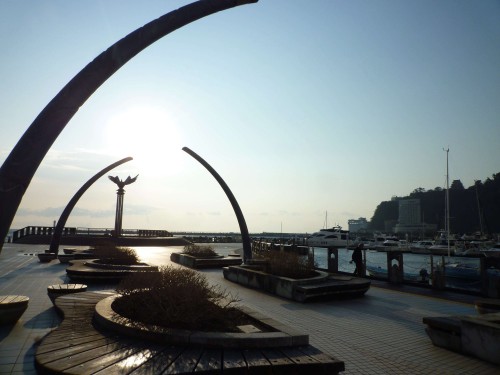 Atami can be reached via Shinkansen (in just 40 minutes!) or JR Tokaido trains, though we decided to extend our journey a little bit by transferring to the Ito line. Once you get out at Kinomiya Station, you will find that you are  just a short walk from Kinomiya Shrine—one of the must-see attractions in Atami. All you have to do to get there is walk down the street towards the tunnel located under the train tracks. Once you cross the tunnel, you will see the red torii gate that greets visitors into the sacred area. 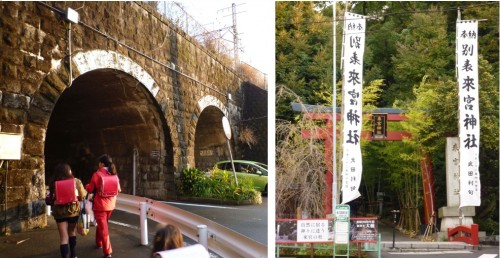 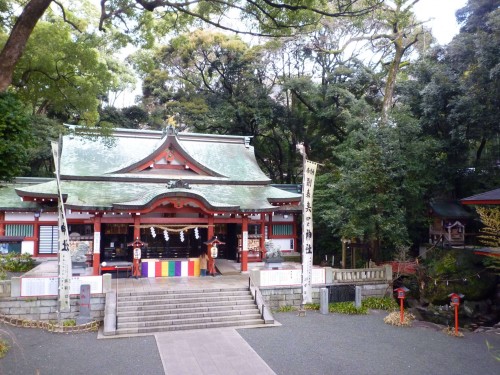 As you can see in these pictures, the shrine is a true architectural treasure. But perhaps you are wondering, what sets it apart from other such shrines located all over the country?

Kinomiya: a tree with deep roots

The answer to that question is actually stated in the name of the shrine itself. Even though its kanji has been changed for several reasons—which are explained on the booklet you will find at the entrance — those of you who know a little Japanese can probably guess the meaning of the word: Kinomiya—’the tree’s shrine.’ Hidden among the foliage you will find a rather peculiar tree; a huge, 2000-year-old camphor tree! 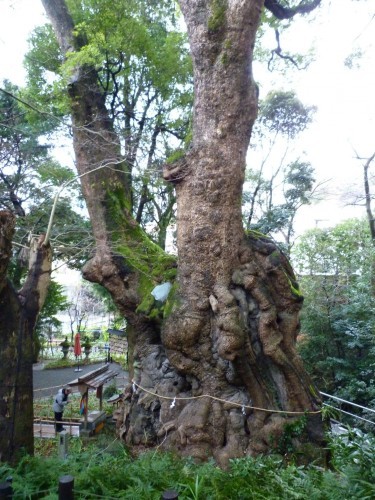 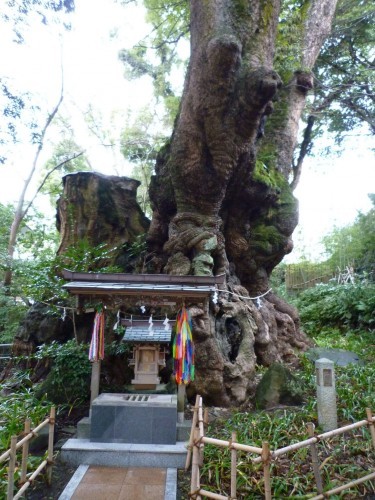 This tree has suffered through severe weather conditions, one of which being lightning strikes. It has been hurt, but never broken. In fact, it has become a sacred symbol of longevity and endurance. Its trunk has since acquired a grey-ish tone that makes it look rather rocky. The green shades of the lichen and moss that cover it give it an impossing appearance that perfectly fits the traditional Japanese aesthetic precepts. It is a prime example of nature turned into art. 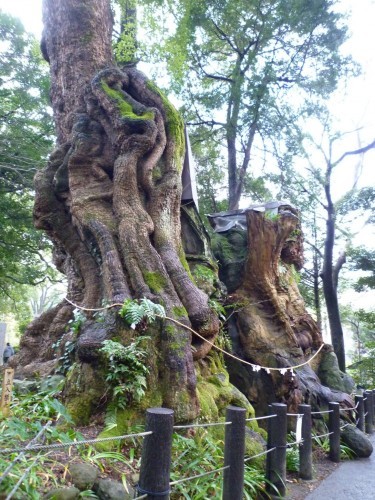 Miyasaka: Atami from the top

Located atop a hill with prime views of the city, Kinomiya is a good place to start your walk around Atami. Miyasaka—meaning ‘the hill to the temple’—is an old path which follows the course of a stream. 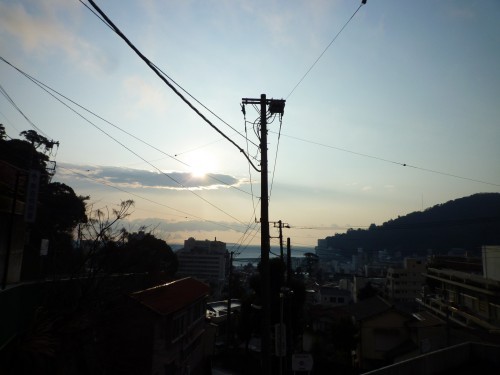 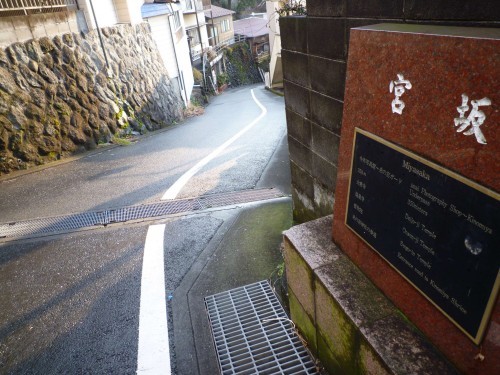 As we made our way down the hill, we came across many different picturesque, traditional buildings, as well as some odd-looking sculptures scattered along the streets. If you are lucky enough to visit Atami during February, as I did, you will be able to enjoy the ume—the blossoming of the Japanese plum trees. Interestingly enough, Atami holds its very own species of cherry tree! Unlike regular sakura trees, which typically blossom around late March to early April, Atami sakura‘s blossoming occurs as early as late January. Botanists and plant lovers must not miss the chance to witness such a beautiful phenomenon! Even though I did not know about this kind of tree before coming to Atami, I was lucky enough to be able to fortuitously enjoy the pink hues of Atami’s sakura blossoming. 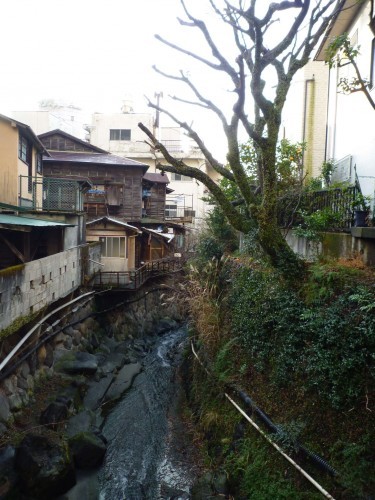 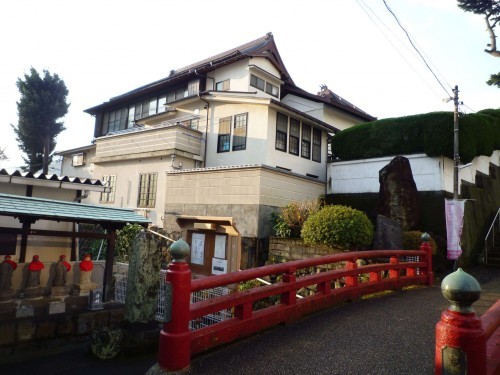 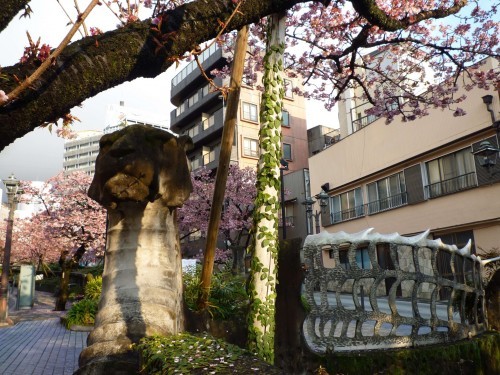 The trail led us right to the ocean. Located by the seaside is a park that doubles as a promenade: Shinsui. The oblique rays of the morning sun made the ocean look extra beautiful. 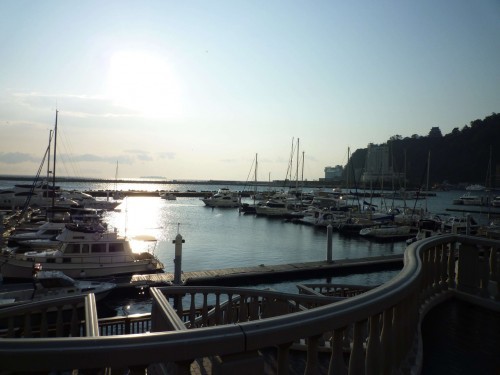 A steep hill serves as the backdrop for the gorgeous scenery found at the park. Atami’s Castle, located on top of the hill, draws the visitors’ attention. However, my inner cinephile kept making me look away, trying to find a specific place on the dock: the spot where Ozu placed his camera to shoot the elder couple in the iconic Tokyo Story. 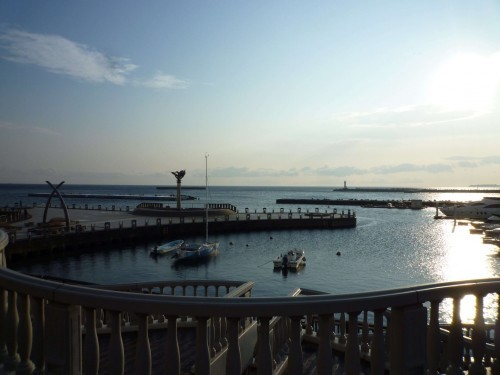 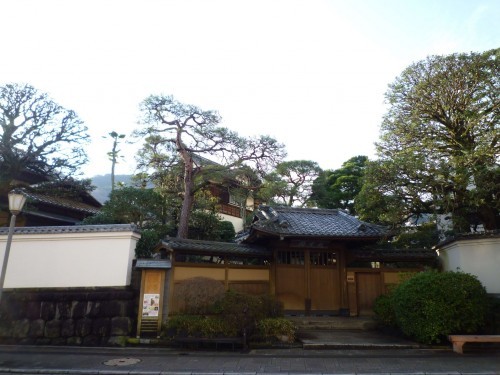 Following our route we got to Kiunkaku. Kiunkaku is not just any other ryokan—a traditional hot spring hotel—in Atami; it is much more than that. Nowadays, Kiunkaku serves as a museum. Visitors can step inside and catch a glimpse of the luxurious residence that was once home to some of the most notorious authors in Japan, such as Tanizaki, Dasai and Mishima. Once upon a time, many famed artists had their names filed on the hotel’s registry. Its stunning garden, located right in the middle of the building, as well as its warm and quiet onsen, were probably good sources of inspiration for all of them. 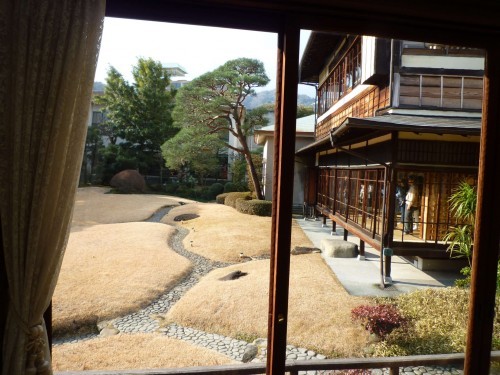 The building’s traditional layout contrasts with the modern, western decorative elements found inside. The most striking example is that of the Mediterranean-looking Roman baths, as you can see below. 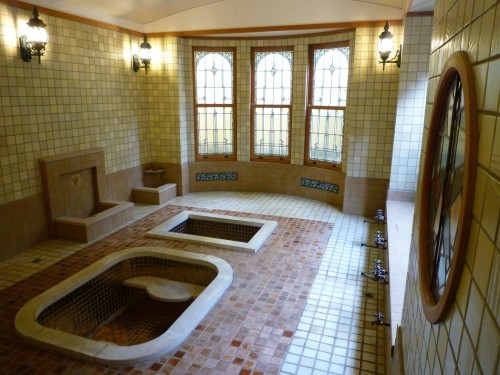 Before leaving Atami, we headed uphill towards the shopping district, which you will find on your  way to the train station. To our amazement, we quickly realized how fun and lively the area is. Many of the shops are located in aged, peculiar buildings, giving the area a lot of character. 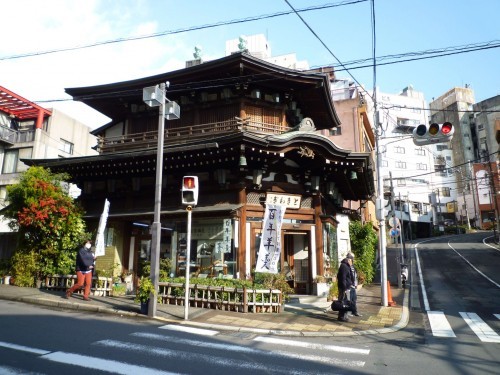 The most vivacious neighborhoods are those closer to the station. These are the classic shotengai streets you can find in most Japanese cities. Heiwa-dori and Nakamise-dori are filled with the sweet smell of manju as it is getting boiled. 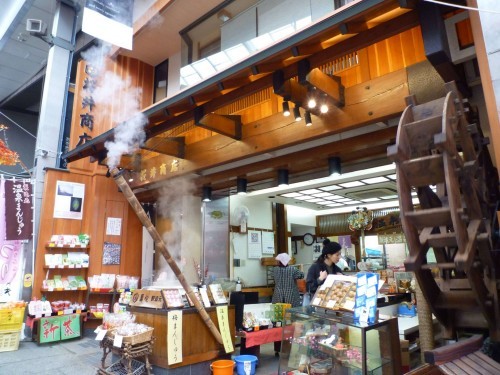 But it is seafood that draws all the attention here. The image of the iconic fugu—blowfish—is always present in the area. You will also find a lot of signs featuring himono—dry fish—on your way out of Atami. 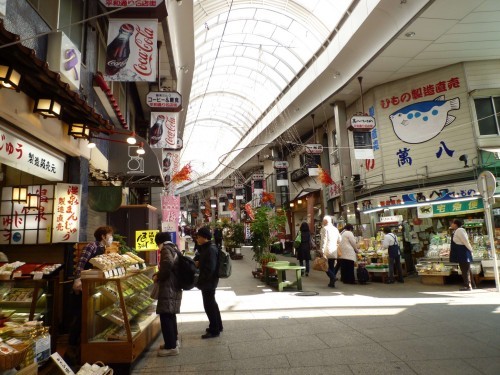 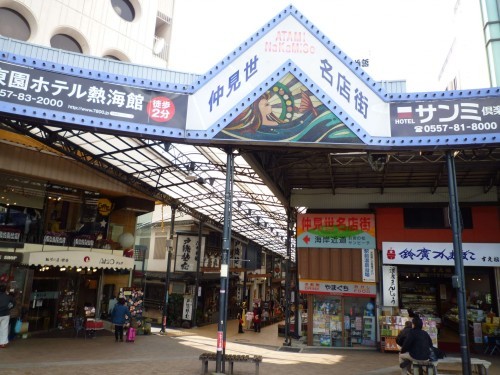 Once we were back in the station, we looked for the right platform and waited for our train to come; a train that would take us to new destinations in the prefecture. Stay tuned, because we will show you more interesting and lesser wellknown places in Shizuoka!

Need more information? You can find up to date information about Shizuoka’s history, sightseeing locations, accommodations, food, and transportation by clicking on the link below: