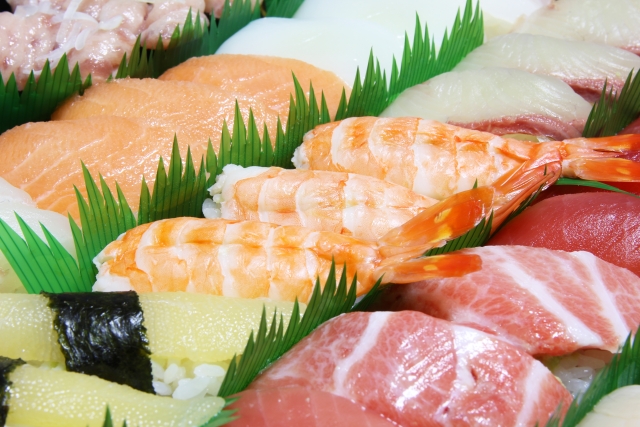 When you first visit Japan you might be in for quite a surprise as you will discover that the varieties of sushi are practically unlimited, so let’s go through the basics of sushi and sashimi and be prepareed to spot whether your sushi is the “real deal”.

The ubiquitous “Hon Maguro Nigiri” or “Blue Fin Tuna on a rice ball” which in this case was marinated beforehand.

Sashimi or thin slices of fish when put onto some rice could be called “sushi” as long as rice vinegar, salt and sugar have been added to season the rice beforehand. On the other hand it does not have to be sashimi as almost anything could be used for making sushi: fish guts, roe, shellfish, meat, vegetables. etc. Even the word “sashimi” does not actually apply to fish only as its meaning is “thin slices” (debatable).

There are 3 basic kinds of sushi:

Of course the three above kinds can be divided into numerous sub-varieties.

One important variety is “Chirashi Zushi”, basically all kinds of (available) ingredients, preferably small, strewn on a layer of rice inside a bowl or shallow Japanese dish. This last variety is commonly encountered at home meals when it is more practical for a housewife to serve to a whole family.

This is the original form of sushi in Japan. One way to preserve fish was to gut it, slice the meat with or without the skin and pickle it (ferment it) in rice. The fish could then always be presented at meals after having taken it out of the pickle jar, cleaned it and served it on a dish as an accompaniment (or main dish) to the usual Japanese fare of rice, miso (fermented beans) soup and pickles.

“Nare Zushi” is slowly disappearing in Japan due to better and safer transport of raw fish. One still available is “funa zushi/crucian carp sushi”. Then one day, somebody selling fish in Edo (old Tokyo) struck on the idea to serve it wrapped around balls of rice to which vinegar, salt and sugar had been added for preservation. These balls were 2 or 3 times as big as nowadays and 3 balls would be enough for a meal. This form of sushi is rarely encountered or available these days.

One modern extension of this technique is “Zuke” whereas tuna (“maguro”) or other fish has been first dipped in hot water for a while, then transferred into iced water to stop it cooking and finally marinated into a pickle brine (“tsuke shiru”) for a while. When cut, the surface is cooked and slightly harder while the inside is still soft and comparatively raw. If it is not dipped in brine it becomes “tataki” (Note: “Zuke” also means leaving the fish slices in a mixture of soy sauce, mirin and sake for about a certain amount of time before making any kind of sushi. Each restaurant has its own original secrets and recipes).

“Bogata” style is a variant of Osaka Oshi Zushi style by wrapping a fish over or a pressed “baton” of sushi rice and presenting it cut!

“Gunkan” means “Mothership” and consists of a small ball of rice laterally wrapped in a thin band of dry seaweed and topped with various ingredients!

A “California roll” made with spicy raw scallops and cucumber 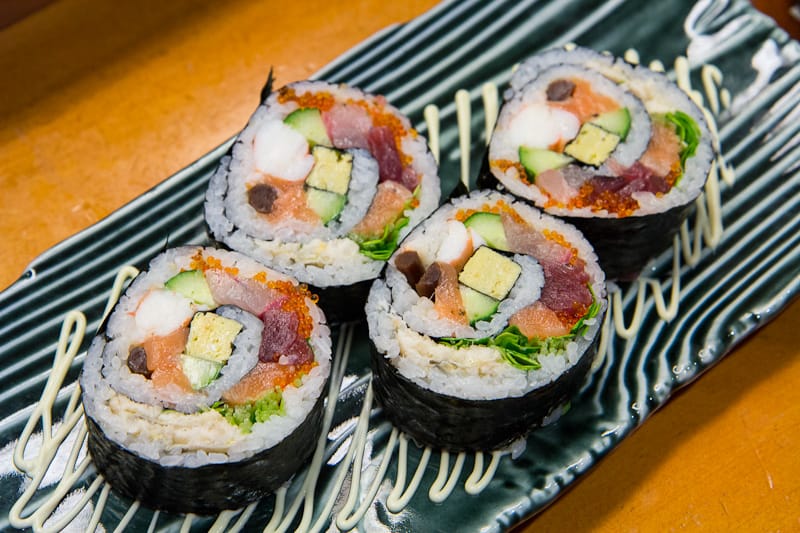 “Rainbow Roll”, a very thick futo maki with no less than 15 ingredients wrapped in sushi rice and dry seaweed

“Donburi Zushi” is a big or small (in the latter case called “Ko Donburi”) filled with sushi rice and topped with one or many ingredients. The variants are unlimited! 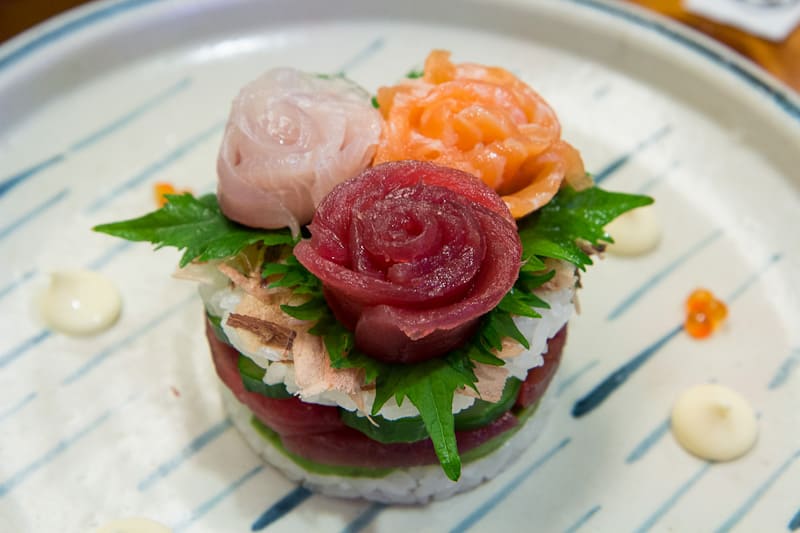 Young chefs do experiment with shapes and appearance, but such “fancy sushi” are rarely introduced on menus, therefore the need to become a regular customer at at least one sushi restaurant. 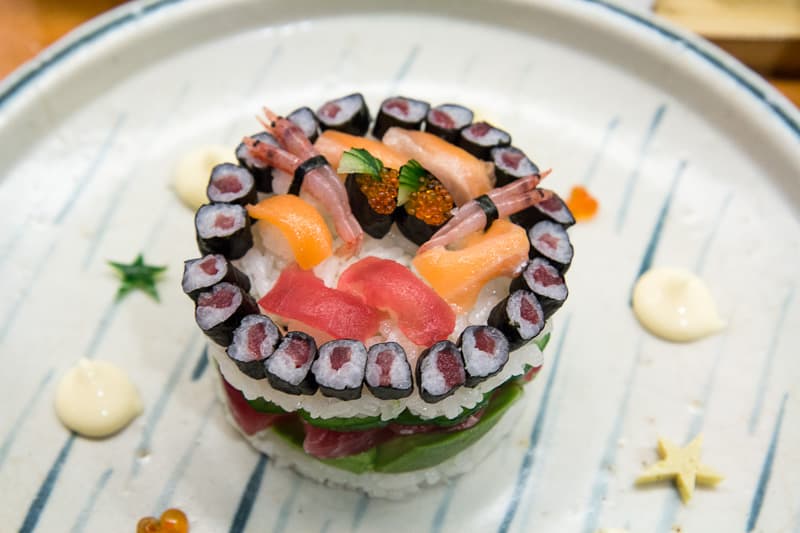 And don’t forget the sushi for vegans and vegetarians! It is possible

This article is only an introduction to what you may encounter during your trip! Do not worry too much about etiquette, the Japanese will have the pleasure to teach you.