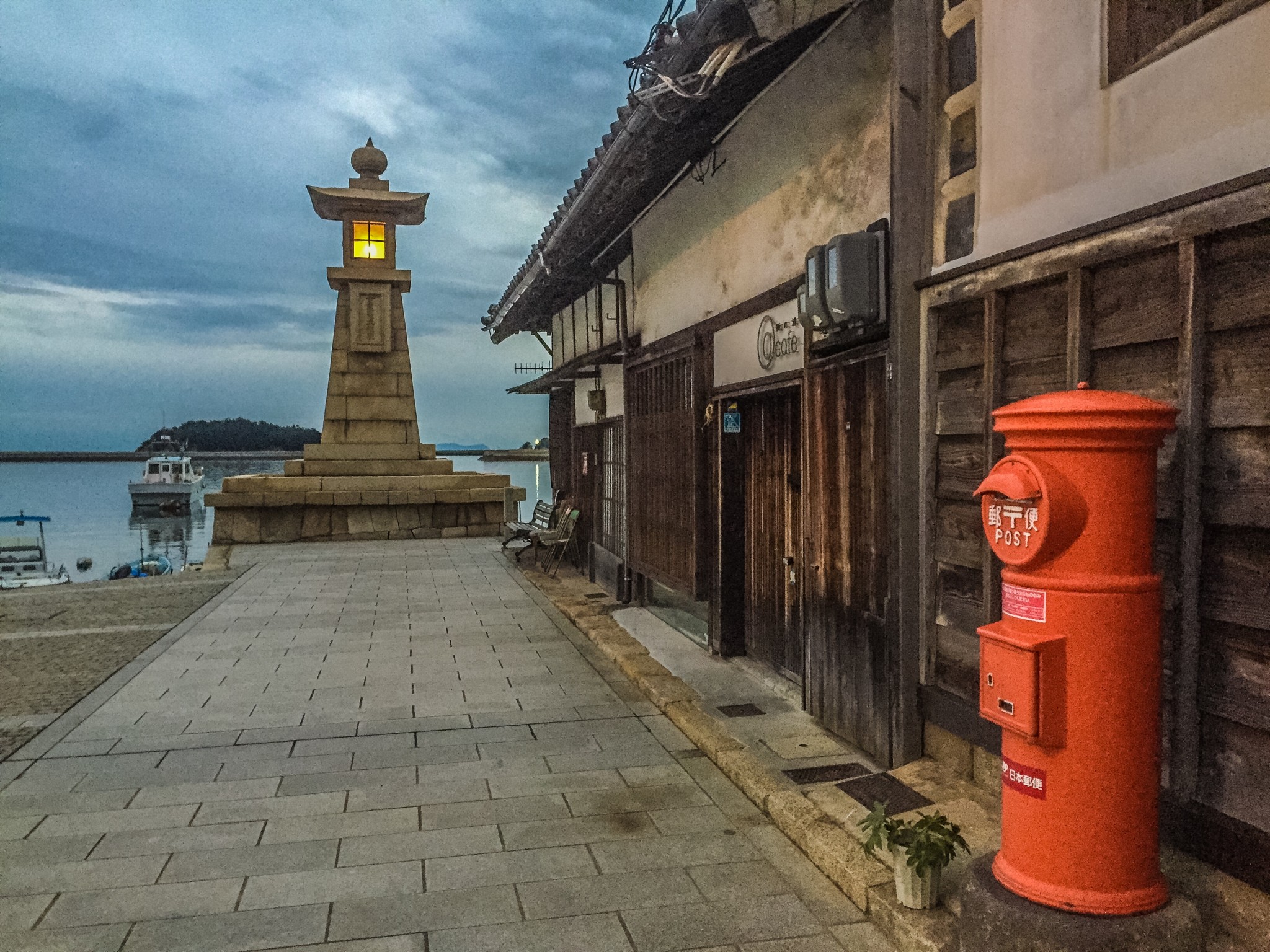 Tomonoura, the Port City of Spiced Sake and Street Cats

In Hiroshima prefecture’s Fukuyama city, we boarded a bus bound for Tomo Port (鞆港, Tomokō) at stop number five.  The bus station, just outside JR Fukuyama station’s south exit, can be recognized as the entire center of your vision. Our bus headed west from downtown and over a wide-banked reed-ridden river. On the west side riverbank’s ridge, the road quietly watched the city of Fukuyama.  The road shifted as we made for different waters – the Hiroshima harbor town of Tomonoura. 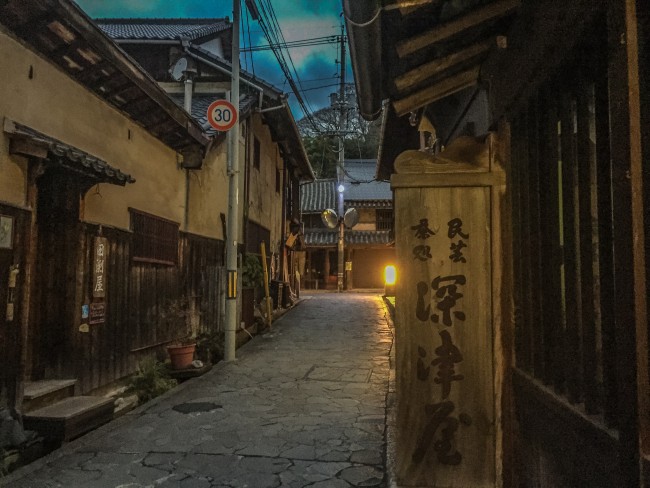 The Tomonoura road was in parts the brushed aside greenery of a Japanese wall scroll. Such places added a special segue to the port town. Contrasting Hiroshima, Fukuyama is a very humble little city, slipped between small mountains.  Beyond them the ridges did rend to sea, an oceanic view.

The sea was a special breadth that I thought only open ocean could offer. This, however, was scenic Shikoku-sheltered Seto Inland Sea national park.  Such nostalgic Japanese magic can be glimpsed in Hayao Miyazaki’s Ponyo, a movie which takes inspiration from Tomonoura itself. 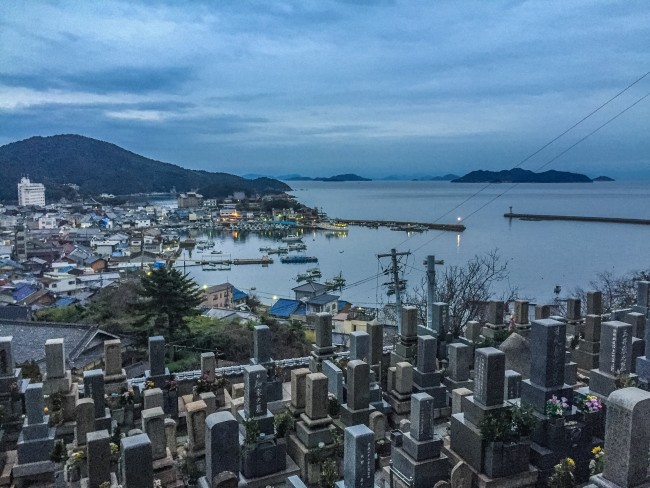 After five or ten minutes seaside, the road took a right and our bus nestled between buildings of the Hiroshima sea village.  The road angled here, as we reached the Tomonoura’s peninsula point. To our front was a Ponyo-proportioned harbor. 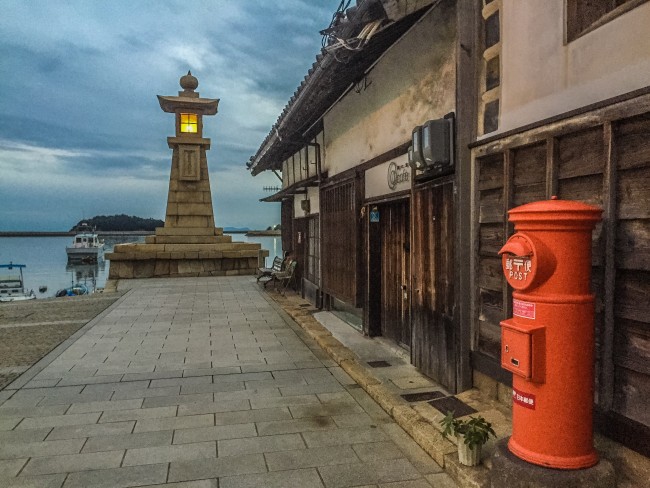 Leaving the bus, we slipped into a stroll towards the cozied-up old town a far cry from downtown Hiroshima.  This quaint area is easily spotted by Tomonoura’s Joyato lighthouse. Unlike a lighthouse, it’s okay to be drawn towards this beacon.  Following the road, a quick left breaches into back streets.  Here are wooden boards built to low eaves; while slightly lumpy roads are peopled by older shopkeepers with slightly lumpy backs.  The air is musty with wood and a sea scent. 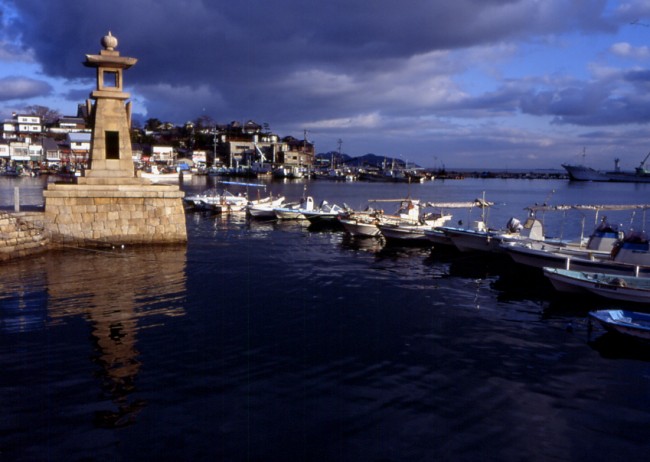 In this sea breeze, heady haze, I first noticed a dark cordial for sale.  It looked thick as those deep waters shepherded by Tomonoura and out to the Seto inland sea at Hiroshima’s easternmost point. Here was an  arcing harbor lined by a crescent road. 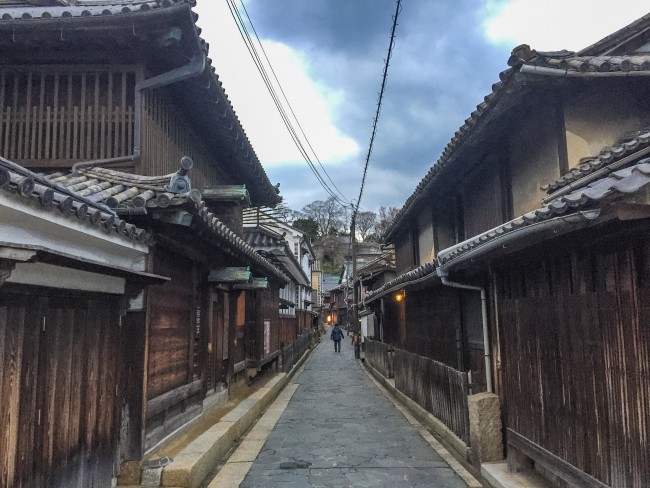 Tomonoura is famous for a Japanese aesthetic in its modern, retro depiction.  The Hiroshima town was the setting for a drama featuring Sakamoto Ryoma’s historical personage.  More familiar to foreigners might be its use in the movie Wolverine.  These locales were in places yet tucked away on Tomonoura’s peninsula.

After snooping around like one of the neighborhood cats, we continued through the peninsula. Again, the dark cordial from earlier was advertised just inside an old-looking spot.  This time we peeped inside to catch an excited greeting from a shopkeeper.

She detailed the properties of what was indeed a Hiroshima local liquor: Homei-shu. Handing us a pamphlet, it became clearer than a swiftly-quaffed spirit that this was a spiced concoction.  The spiced sweet has been favored as a medicine by locals since the 1600s. It was only for our good health that we uncap and take a spoonful.

The taste had an old-time confectionery bang, and I could imagine it stocked by a confectioner in his sweet-toothed celebratory stash.  The homei-shu’s ruddy muddiness could brighten cheeks like a cherub in a candy store with its taste both young and ancient.  At its cheapest in a small decanter at “Tomo Sake brewing,” we purchased 180 ml for 500 Yen there.

With cheeks red as if pricked by a pin the size of our sample, it was time to warm our bellies.  My friend recommended a place, name unremembered, where bowls were broth-filled with a thick knot of soba (buckwheat) noodles.  Though not a Hiroshima specialty, from her account of a grand belly-filling, I naturally agreed to find this Tomonoura spot.

This spot – Sandaime Sakujyu – was located where the road approaching Tomonoura swung eased into the town center. It faced the Seto sea and nearby island of Sensuijima, but in its deepest corner you’d forget just where you were.

Parting the noren curtain, we entered.  The door’s rumble muted the outside world, and only a soft “irashaimasse” (“welcome!”) accompanied by a quiet sea swell of strings settled us towards our seats.  A lone chef stood at the counter, presiding over it with a slow rise of Western classical music behind him.

We were seated Japanese style, bounded by a low wall placed around us on a knee-high platform. We ordered – I ordered a soba dish with a drowned mass of vegetable and fish tempura.  Our food was carried quickly over as the chef prepared solo at a tremolo pace.  The shine on the bowl’s lip reflected my wide, bright smile.  The portion was robust as a contrabass; taste sublime as the voiceless instrumentals.

For an indeterminate time, we were given to Sandaime Sakujyu’s ambiance. Food and music together softened us up for a presumed amble.  We spoke a well-deserved “gochisou sama deshita” (something like “it was a feast”) and out we went.

Completing a circuit of Tomonoura, we found the back-end of a Tomonoura terminal bus. As Haruki Murakami’s stories sometimes go, we were beckoned by  a cat stretching out across the road. With a flick of its paw, we were there. 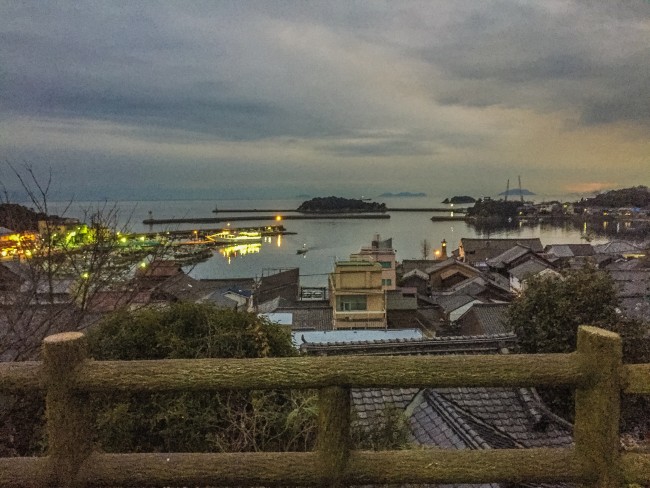 A spilled yarn’s crisscross of roads led us into another neighborhood.  Climbing a slope we found a café marked by a decorative cat silhouette I didn’t recognize. A mewling cat friskily strutted out from by the café to bound down a stone stairwell.  It framed a view of various rooftop angles, quiet as any in rural Hiroshima.  As the cat slipped away, it seemed like a prowling street cat’s wonderland. 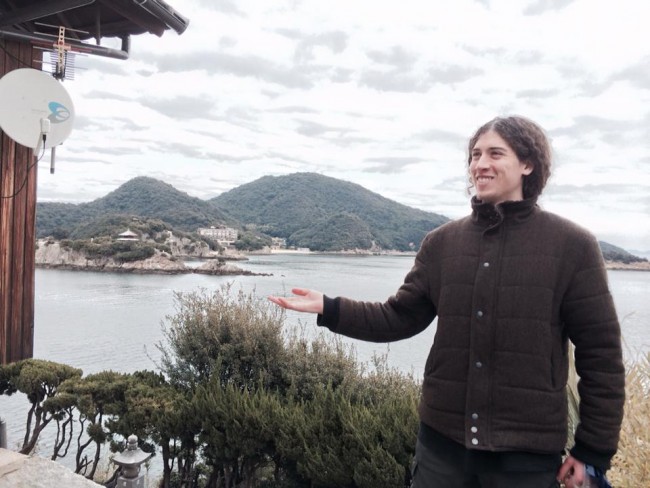 A tower topped this hill overseeing sea. Stout “Empukuji” temple possessed a view of neighboring Sensuijima island, and curious island “Bentenjima” singly-occupied by its shrine.  We were bare as a monk’s head of cash, and couldn’t pay the 200 Yen admission for one Fukuzenji Temple’s wide view. We instead opted for vacant open-air space at Empukuji.

Returning back and below closer to sea, we stopped at intervals as erratic as cat’s moods.  One moment one begged for a pet, the next it was ready to swipe. Tomonoura’s feline hideaways were humble, and a vaguely distinguished hut had served as Hugh Jackman’s housing in the movie Wolverine.  The town had no shred of Wolverine’s contempt as children guilelessly rounded this pedestrian Tomonoura back road.