Located in Japan’s snowy northern island, Asahikawa is a hub for Japanese woodworking, furniture production and interior design. A uniquely curated showcase of the region’s finest brands, studios and artisans, the Asahikawa Design Center is a testament to why the furniture manufactured here is so well-respected and sought after across Japan and internationally. It is also a peek into why the city has developed this prominent industry; in many ways it is rooted in Asahikawa’s wealth of natural resources. 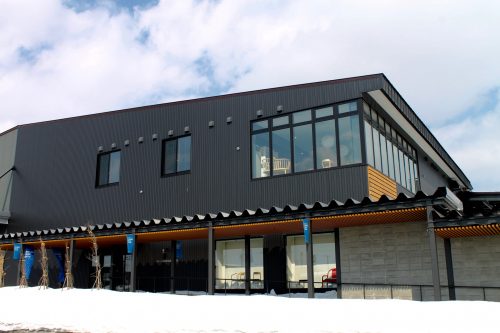 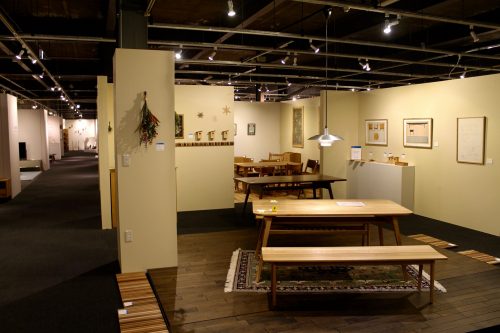 With 25 million hectares of forested land covering Japan’s mountainous landscape, lumber has long been integral to country’s culture and style. In total, over 67 percent of Japan is populated by forests, which is a staggering amount compared to the world average of 29 percent. In the midst of these lush woodlands, Asahikawa opened its first sawmill back in 1890. Ever since, the lumber business here has been processing Hokkaido’s signature Japanese oak forests, generating high-quality raw materials that have been put to use by the region’s woodworkers. 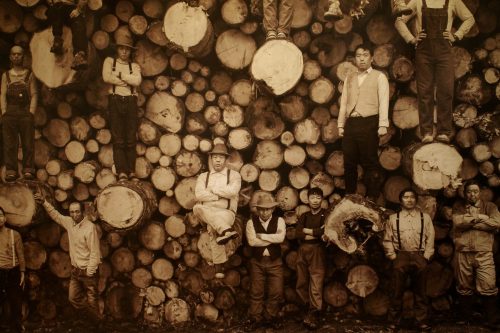 Over time, as the furniture craftsmen of Asahikawa developed their trade and attracted other furniture artisans to the city, the industry has moved beyond wood to create modern furniture with diverse materials, but at its core, oak is still king. At the Asahikawa Design Center, a mural of local lumberjacks is plastered across one wall, signifying how integral they are to the success of Asahikawa’s furniture industry. The oak lumber trade has also changed, in efforts to keep up with 21st century sustainability practices. By cutting down trees in moderation—using only the minimum required to continue furniture manufacturing—the lumber industry is looking to protect and redevelop Hokkaido’s forest ecosystem.

A Visit to Asahikawa Design Center

Asahikawa Design Center is the best place in town to appreciate the region’s contemporary furniture design. I took a short cab ride from Asahikawa Station, just 15 minutes. While at first glance I didn’t think much of the building’s warehouse façade, I was soon taken by a gorgeous covered walkway leading to the entrance, with wooden beams lining the ceiling. When I stepped inside I was kindly greeted by the staff and handed a few brochures in English. 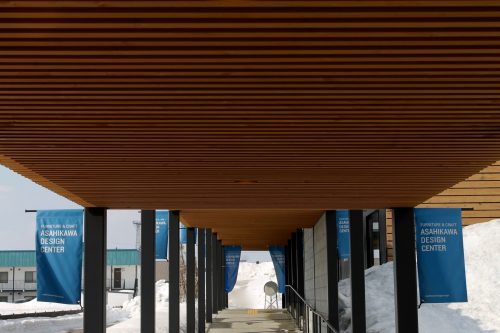 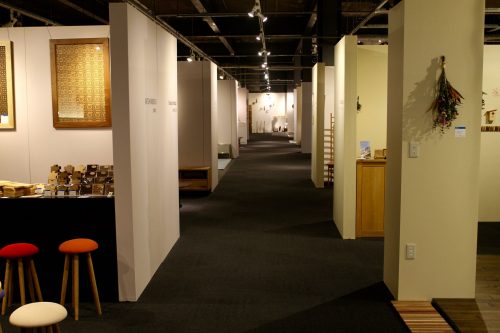 The set-up of the Design Center lies somewhere between museum and showroom, with an IKEA-style layout, only made for the high-end furniture connoisseur. There is no right or wrong way to navigate the many cubicles, display walls and faux living rooms that fill the first and second floors of the building. I slowly meandered from one display to the next, taking the time to stop and admire the detailing in a wooden chair or the color scheme in an interior design layout. An array of pastel accent pillows caught my eye at one point, as did a children’s playroom that doesn’t taken sophisticated design for granted. 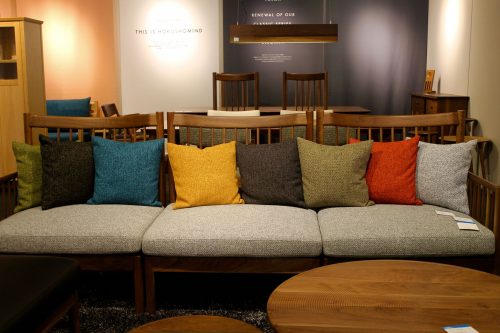 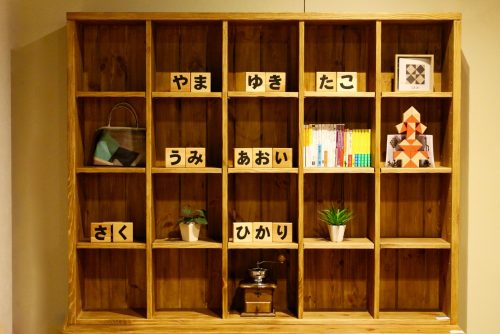 One of the most zany furniture pieces I came across was an ottoman covered in a thick fur coat. That in itself was not notable, but the fur tail and wooden feet made it a true original. No matter how many times I did a double-take I couldn’t shake the feeling that the ottoman could come to life and walk out of the design center on its own four legs. 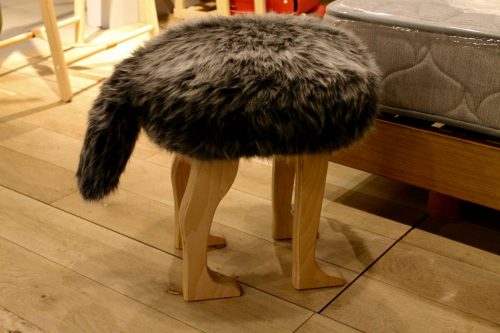 My favorite furniture pieces were far and away the diverse selection of lamps. I think these designers were playing with something extra—not just considering the shape and color and material in their pieces, but also the diffusion of light from the lamp, whether hanging or standing. Some took on abstract futuristic forms, projecting bright white fluorescent light across their display area. 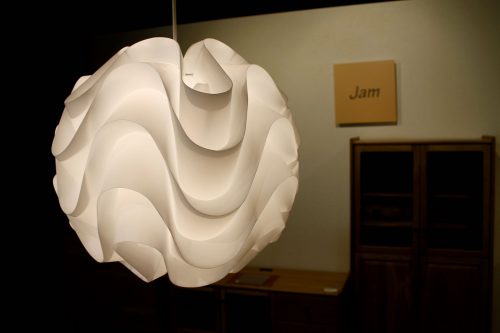 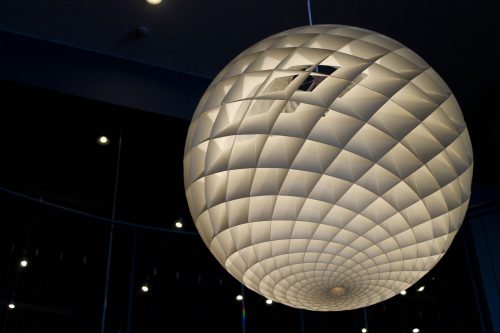 Others took a mellower yellow turn, with warm glowing orbs filling one room. One of the most creative pieces I saw on display though was a lamp fashioned from an oak tree. The tree appeared to have been chopped into parts, then stacked back together, one cross section loosely place on top of another. 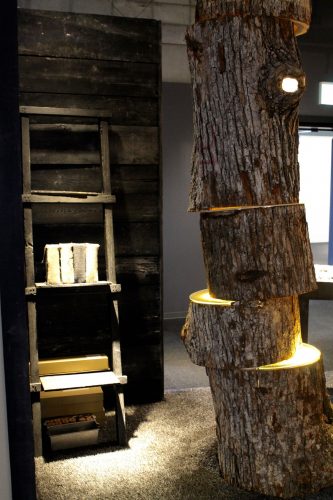 Most display cubicles were organized around the designer or studio that had produced the work in the room. With dozens and dozens of cubicles, I could really appreciate the rich diversity of Asahikawa’s furniture design industry, from the kitschy dog carvings for children, to elegant interior art objects. Walking away from the Asahikawa Design Center, I had a new appreciation for the city’s long history of woodworking, taking Hokkaido’s natural resources and reimagining them into striking pieces of art and a thriving local artisan community.

To reach the Asahikawa and Higashikawa area you can take one of seven flights offered daily between Tokyo Haneda Airport and Asahikawa Airport, a journey just shy of 100 minutes. If you’re traveling via Kyoto or Shirakawa-go, you can book the one daily flight out of Nagoya. Using the ANA Experience JAPAN Fare or the JAL Japan Explorer Pass those flights will run just 10,800 yen. Asahikawa airport is in service even in deep winter, with 99% of flights running despite harsh weather conditions. From Hokkaido’s capital city, Sapporo, train travel to Asahikawa Station will take 90 minutes on the JR Limited Express. Both Higashikawa and Asahikawa are easy points of departure to experience the natural beauty of Mt. Daisetsuzan, the highest mountain in Hokkaido.