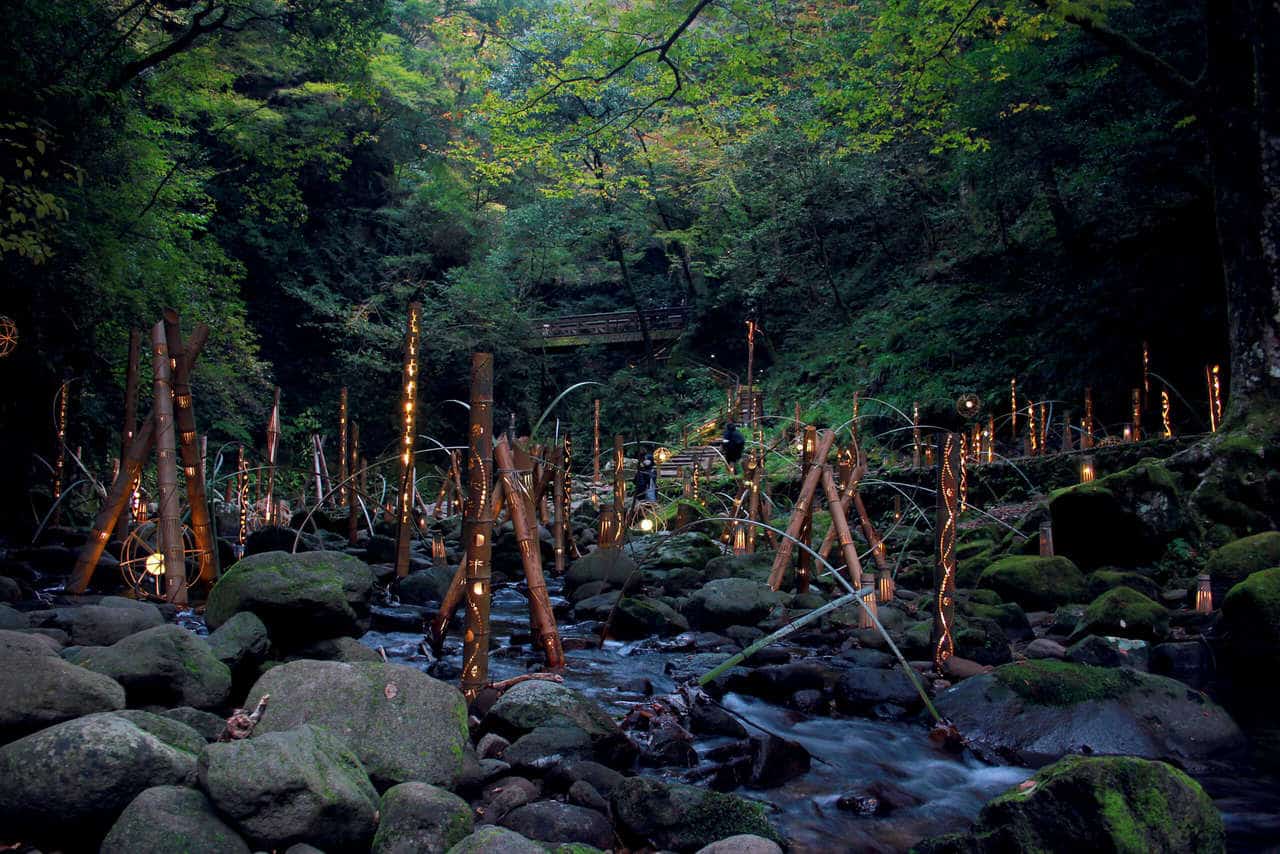 When travelling in Japan, it is often tempting to visit the famous Kansai trio — Kyoto, Osaka and Nara. But how about a visit to other captivating places on the periphery of this itinerary, such as the town of Iga?

The ninja of Iga are well known in Japanese history. It is in this city, located in the northwest of Mie prefecture, where the art of the ninjutsu was born, taught at the Iga-Ryu school. This is why Iga is a popular destination for Japanese of all ages, especially as it is easily accessible from Kyoto and Osaka railway stations. A trip to Iga offers the chance to visit several historical sites, such as Iga-Ueno Castle and the poet Basho’s memorial, as well as to venture out into the surrounding nature, such as the wonderful Akame Waterfalls.

The Iga township was established in 2004, following the merger of Ueno with five other neighbouring villages. Today the town is officially called Iga, referring to the ancient province of the same name. But some places, such as the castle, are more often called Iga-Ueno. Depending on the period we are referring to or the site we visit, the town can be referred to under all three names (Iga, Ueno and Iga-Ueno).

Ueno Park (上野公園) is located in the heart of the city and includes, among other things, the Iga-Ryu Ninja Museum, Iga-Ueno Castle and the Haiseiden Memorial dedicated to the poet Basho. It is located a a few minutes’ walk from Uenoshi station, which is served by the Iga Railway (accessible from Iga-Kambe station, operated by the Kintetsu line from Osaka). But on that day, I had chosen to go there by car to save time and visit Akame in the afternoon.

Allow an entire morning to visit the whole park, as time passes quickly between visits to the different places. Personally, I was also happy to walk quietly in the forest of the park and enjoy the mildness of the first days of autumn.

Although the ninja are sometimes said to have witchcraft-like powers, they were in fact highly trained mercenaries who fought in many places in Japan. In the province of Iga, a group of ninjas resisted the powerful warlords who wanted to subjugate the region, which explains the desire to have built the museum there. Beyond the folklore surrounding these characters, the Iga-Ryu Ninja Museum (伊賀流忍者博物館) focuses on detailing the practices and teachings that were given to the ninjas within the Iga-Ryu school, known as ninjutsu.

First of all, the museum offers an exhibition that retraces the history of the Iga-Ryu school in its historical context. You can see several hundred objects on display, weapons and costumes with video and text explanations, to discover what the teaching of ninjutsu was made of.

Then you can visit a house where ninjas lived, which showcases several traps and hiding places. Ninjutsu consists, among other things, of mastering the art of becoming invisible. Ninjas had to be creative in the art of disappearing in case of an attack, even inside their own house.

Finally, to round off the visit, the museum offers a performance that takes place one to four times a day. During the show, actors demonstrate tricks that camouflaged the ninja into the crowd. You will see, for example, a woman whose parasol turns out to be much more deadly than it looks, or a flute player who is not about to play a sweet melody for you!

A stone’s throw from the museum, a building with a striking round roof looms behind the pine trees. It is the Haiseiden Memorial (俳聖殿), built to commemorate the 300th anniversary of the birth of the traveller poet Matsuo Basho. Indeed, the famous poet, considered one of the fathers of haiku, was born about ten minutes away in 1644. He was also called Haisei, although he is known worldwide by his pen name Bashô.

The roof of the building is said to be shaped like an umbrella to protect the traveller and the rest of the architecture is said to evoke his clothes. As you approach the open wooden doors, you can see a statue of the poet and judge for yourself. The building is surrounded by maple trees, but on that first day of November, they had not yet put on their autumn colours.

While it is now called Iga-Ueno Castle (伊賀上野城), it was originally Ueno Castle (上野城, Ueno-jō). It was also known as Hakuho Castle (白鳳城, Hakuhō-jō) which means “white phoenix”, referring to its pristine architecture and walls. It was first built in the 16th century and then expanded during the 17th century, gaining stone walls of more than 30 metres high that you can still see from outside the park. These walls are still among the highest in the country.

Shortly afterwards, a storm tore down the keep, which was not rebuilt at that time. As the political situation in the country was more stable, the keep was no longer as necessary as it had been. It was not until more than three centuries later, in 1935, that funds were raised for its reconstruction. And while most Japanese castles renovated in the modern era are built of concrete, Iga-Ueno Castle’s keep was rebuilt entirely of wood, making it one of the most beautiful and authentic Japanese castles you can visit.

I chose to start my visit from the outside and walked around the ramparts, impressed by their height, as I imagined visitors of the past would have been. Then, returning to the park, I began to climb the stairs into the forest, and after a few minutes, I could see the castle’s facade behind the trees.

To reach the castle, I had to climb the imposing stone steps at the entrance. As I watched the cherry trees stand by the stairs, I imagined how pretty it must be during springtime, as the pale pink of the flowers must blend with the grey of the stones and the white of the walls.

Once upstairs, I entered the dungeon, which is home to the castle’s museum. The solid wood ceilings create a warm and authentic setting. Hundreds of objects that belonged to the castle’s inhabitants are displayed on two floors. The extensive collection ranges from armours and battle accessories to art and everyday objects. Among the gold-leafed partitions and lacquered chests of drawers, I noticed the constant presence of the same paulownia flower emblem. I could have spent hours observing the fineness and quality of each of these antiques.

On the third floor, the windows allow you to see in all directions and offer a breathtaking view of the park, the town of Iga and the mountains of the region that stretch as far as the eye can see.

I was now leaving the town of Iga and heading to Akame, located a little more than thirty kilometres to the south. The mountain of Akame was used as a training ground for the ninjas of Iga-Ryu, and it is also where the 48 waterfalls path can be found, which offers a superb short hike along the Taki river. I call it “short” because it can be done in less than two hours and is suitable for children and less experienced hikers.

During the last 15 minutes of the ride, before reaching the entrance to the 48 Akame Waterfalls (赤目四十八滝), you will pass many ninja-themed attractions, some of which even offer to try out ninja training. For my part, I didn’t stop because it gets dark pretty quickly in the forest, and I wanted to make sure I had enough light to admire the waterfalls.

At the very end of the road is the entrance to the waterfalls. After passing the reception at the entrance, I walked through the “Salamander Center”, an aquarium housing giant salamanders, one of the largest species in Japan. These same creatures live in the Taki River but are not visible during the day.

Akame means “red eyes.” This name refers to an episode of Japanese mythology. It is said that the founder of Shugendo, En no Gyoja, was near the waterfalls when he came face to face with the deity Fudo Myoo riding a red-eyed bull.

Beyond its beauty, this place is also profoundly linked to ancient beliefs. For example, the number of waterfalls is not really 48, and some believe that the choice of this number comes from Buddhist beliefs, referring to the 48 vows of Buddha. So rest assured, there are still 23 waterfalls to see on the way!

The Higher the Prettier

On the first part of the walk, the river is decorated with many bamboo lamps. The staff advised me to take my time so that they would be lit up by the time we came back later.

As I walked up alongside the river, the landscape became wilder, and each waterfall was more beautiful than the last. They all have names that describe them, such as Fudodaki Waterfall, “the still waterfall” (although it probably owes its name to the deity Fudo Myoo), Senjudaki, “the waterfall with a thousand hands,” or my favourite, Nunobikidaki, “the cloth waterfall.” The latter looks like a smooth, shimmering silk fabric flowing over the stones.

As I admired the mesmerising natural beauty of this place, I thought it was obvious that people of all times had associated it with deep beliefs. And whether one embraced these beliefs or not, this place had a powerful atmosphere, and the waterfalls seemed to be natural works of art that a collector had gathered there.

It was 4:30 pm when I arrived at the last waterfall, Nunobikidaki, and the forest had already darkened. On the way back, lanterns were lighting up the river. Behind me, the staff closed the passage and said the access to the waterfalls not lit up would be closed from this time of the day. It was a good thing I didn’t dawdle when I arrived. I would have missed the most beautiful part of the hike!

Iga is easily accessible from Kyoto, Osaka or Nagoya, by train or by car.

How to Get to Ueno Park

The nearest station is Uenoshi Station on the Iga Railway, accessible from Iga-Kambe Station via the Kintetsu Line. It is about 2 hours from Kyoto, Osaka or Nagoya stations.

The journey by car from these three stations takes about 1.5 hours.

Detailed information about the Iga-Ryu ninja museum can be found on their website, including the ninjutsu demonstration schedules.

You can also visit the Iga-Ueno Castle website for more information.

How to Get to the 48 Akame Waterfalls

From Uenoshi Station, take the Iga Railway to Iga-Kambe Station and the Kintetsu Line to Akameguchi Station. Then take bus 11 to 赤目滝 (Akametaki /Akame waterfalls) for 10 minutes. It takes about 1.5 hours by train or bus and about 45 minutes by car. There is no motorway available on this route.

Iga and its surroundings offer so much to see and learn that you will undoubtedly have an exciting trip. The beauty of the surrounding nature complements the richness of the historical sites, and I would like to recommend this destination to all travellers who wish to discover Japan off the beaten track, whether on their own or with their family.

Designer and kimono upcycler from France, living in Japan since 2014. I came with the idea of spending a year in Tokyo... and never left since! I quickly became passionate about traditional Japanese textiles, and the beauty of landscapes still amazes me every day. After living in Tokyo, Osaka and Miyazaki, I now live in Arashiyama, Kyoto. When I'm not behind my sewing machine, I like to hit the road and explore the region to discover local crafts and other hidden treasures.