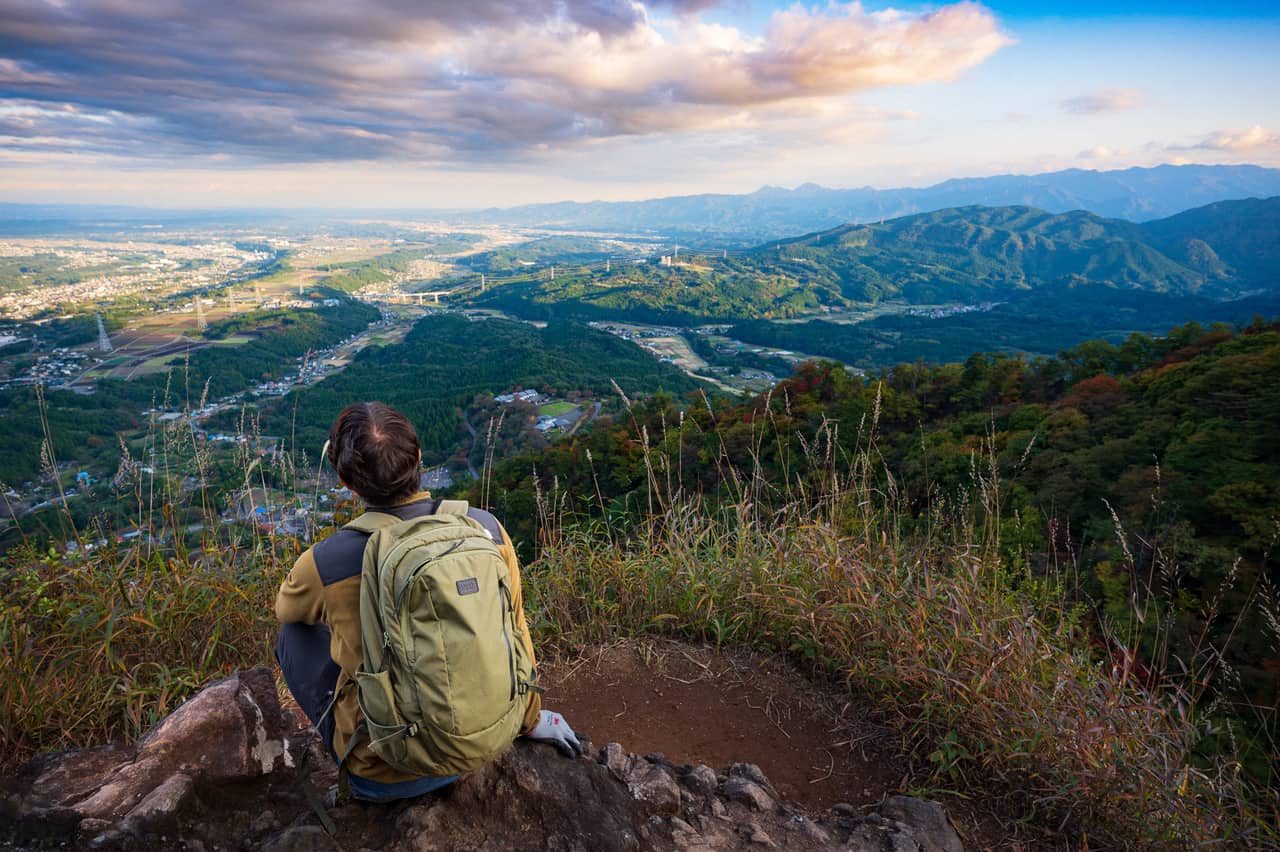 In Gunma (群馬県), beneath the forest canopy halfway up a great mountain, we ascended an ancient stone staircase, crumbling from the weight of time and the thousands of feet of those who climbed to the shrine above. The 165 stairs felt neverending until we suddenly reached the temple grounds and stood in the presence of the great black lacquered shrine, with its elaborate gold carvings peeking from under its darkened eaves.

You might think I’m speaking of Toshogu, the great lacquered shrine of Nikko and final resting place of Tokugawa Ieyasu, the first Shogun of the Tokugawa Shogunate. A fitting monument to one of the most important figures in Japanese history, Toshogu Shrine is a popular tourist destination for domestic and foreign tourists alike. But Myogi Shrine in Tomioka city, as easily accessible from Tokyo as Nikko, remains a hidden gem in the crown of Gunma Prefecture.

The Rugged Beauty of Mount Myogi

Mount Myogi (妙義山, Myōgi-san), a conglomerate of six jagged peaks considered one of Japan’s three most unusual geological formations, has long been a spiritual center, millenniums before the first buildings were ever erected here. There is reason to believe that mountain worship existed here from Japan’s Jomon Period, over 5,000 years ago. However, the first known structure was built about 1,500 years ago, a simple wooden structure to enshrine the god of the mountain. But it wasn’t until the middle of the Edo Period when successors to the Tokugawa Shogunate and other prominent samurai families took an interest in worshiping here that the elaborate buildings we find here today came into being.

In the 6th century, Buddhism was said to have first arrived in Japan. It sometimes fused with Shinto, Japan’s existing religion, and other ancient forms of worship. Because of Mount Myogi’s long history of mountain worship, Myogi Shrine became one of the locations associated with Shugendo, the religion that was a mixture of these three belief systems. Shugendo practitioners believe the discipline and strengthening of the body are a vital part of their religion. The trails of Mount Myogi were used for hundreds of years as a sort of training ground for Shugendo practitioners.

Myogi Shrine: From Shugendo to Shinto

Because of the mixture of Buddhism and Shinto, visitors find examples of architecture and design that represent both religions at Myogi Shrine. There are two Chinese-style gates constructed in the 1750s, Karamon and Somon, which represent the Buddhist aspect of Shugendo. Both gates have been well preserved and are designated as Important Cultural Properties. Beyond the Somon, you’ll find a large bronze torii, a symbol of Shinto. Around the time the gates were built, the Honden main hall, Heiden, and a small “palatial home” used as an accommodation for dignitaries were also constructed. The black lacquer covering the main shrines requires a time-consuming and elaborate process of applying many treatments to the wood in layers. Some layers were applied with brushes made with women’s hair, which was thought to produce the smoothest surface. This rare process is seen on only a few shrines in Japan, most notably Toshogu Shrine in Nikko.

If the elaborate carvings and paintings of the main shrine look familiar, it is because the artisans who worked on Toshogu also worked on Myogi Shrine, one of the benefits of having members of the ruling Shogunate as patrons. While modern-day visitors wait patiently for their turn to observe Toshogu’s details up close, visitors to Myogi Shrine can take their time admiring the incredible techniques used to design the main shrine here.

When the Meiji government took power from the Shogunate in the late 19th century, one of their mandates was the separation of Buddhism and Shinto religions and the abolishment of Shugendo. At this time, Myogi officially became a Shinto Shrine, although the Buddhist-style buildings were allowed to remain here. Although no longer a location for the Shugendo religion, practitioners continued to use the mountains as training grounds.

One of the more accessible destinations for Shugendo practitioners to trek to is Dainoji, a huge kanji character 大, meaning “big.” Dainoji was not named for its size, which is about 3 meters tall, but for the name of the deity of the mountain worshiped here, Myogi Daigongen.

Originally it was constructed for travelers on the Nakasendo, one of the main roads between Kyoto and Edo (now Tokyo) during the Edo Period. The Nakasendo passed near Myogi Shrine, but not close enough for many visitors to conveniently pray there. Instead, the large character was erected out of straw on the mountain above the shrine, so travelers could spot it and pause to pray from the road. Eventually, Dainoji was reconstructed in metal for longevity purposes.

Today, you can still find Shugendo practitioners and trail guides who can lead you up the mountain behind the shrine to Dainoji. For the physically fit, it takes about 45 minutes to an hour to ascend to Dainoji and its incredible views of Tomioka city and some of the area’s other sacred mountains.

However, the path was made for Shugendo physical conditioning and is certainly no walk in the park. Steep, slippery inclines with soft soil and loose rocks make the climbing slow, and less than perfect weather can make the path unsafe to climb. Three sections require you to climb up and down the mountain using a chain attached to the rock face, including the last steep climb onto the small rock Dainoji itself rests upon. If you are not in good physical shape, lack good trekking shoes, fear heights, or are traveling with young children, I cannot recommend this trek to you. It also tends to get dark in the shadows of the mountain earlier than sunset, so allow plenty of time to descend back to the temple, or you may end up descending in darkness. And, of course, bring plenty of water to keep yourself hydrated as you won’t find anything along the way.

How to Get to Myogi Shrine

You can get most easily to Myogi Shrine from Tokyo’s Tokyo, Ueno, or Shinjuku Stations. From Tokyo or Ueno stations, use the Hokuriku Shinkansen train to get to Takasaki. From Shinjuku Station, take the Shonan-Shinjuku line train to Takasaki (try to get a rapid or express service train to get there in under 90 minutes). When you reach Takasaki Station using either of the trains mentioned, transfer to the Shinetsu Main Line to Matsuida Station(松井田駅). From the station, a taxi can take you to the shrine in about 10 minutes.

If you come by car, take the Joshin-Etsu Expressway and exit at Matsuida. Follow your GPS or navigation app the rest of the way to the shrine.

Myogi Shrine: A Day Trip from Tokyo or Karuizawa

Even if you don’t experience trekking on Mount Myogi, you’ll find the shrine to be an accessible and uncrowded way to enjoy the extravagant design and techniques of the craftspeople who worked on Toshogu Shrine in Nikko. Because Tomioka city is close to both Tokyo and famous resort town Karuizawa in neighboring Nagano Prefecture, it’s the perfect destination for a day trip to enjoy the less-traveled parts of Japan.