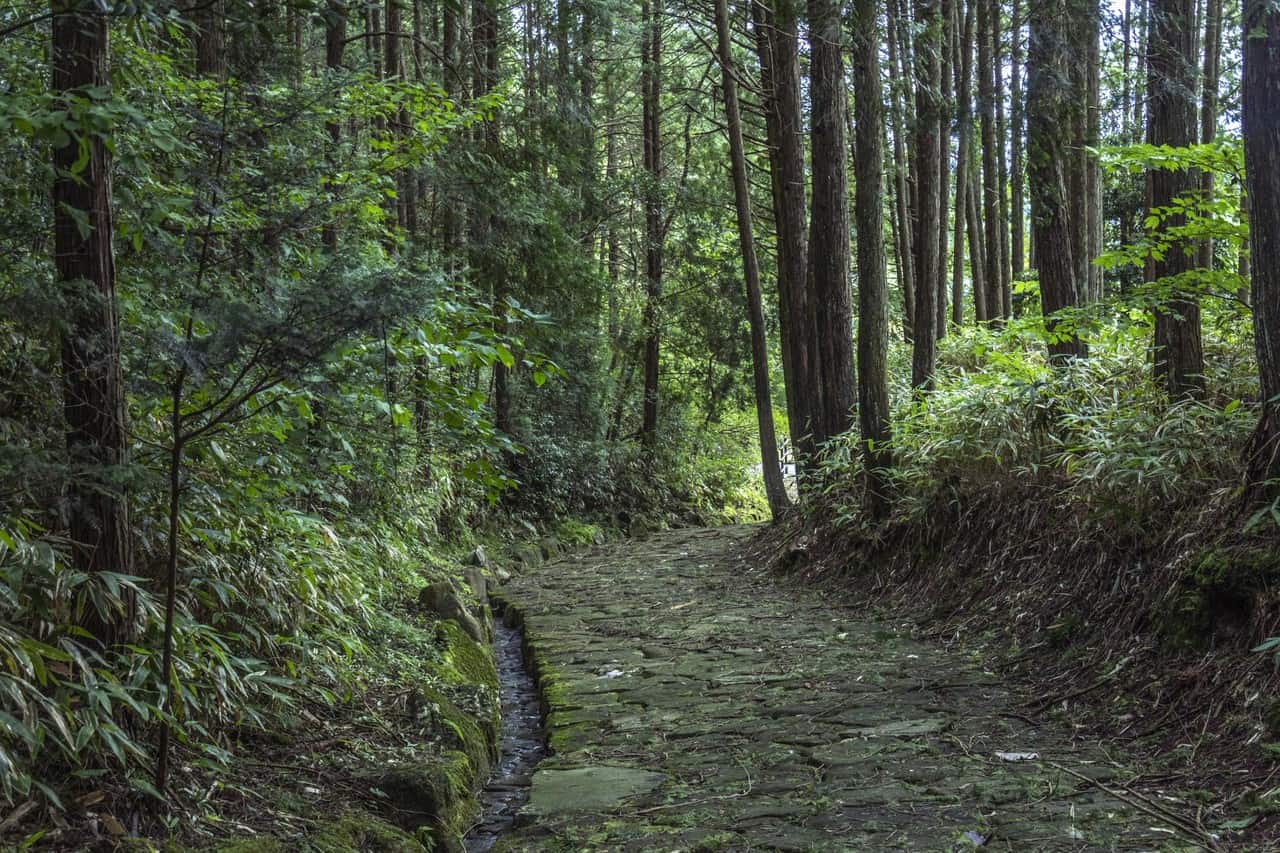 Hiking through the Nakasendo Trail from Nakatsugawa Post Town

Do you know of the Nakasendo trail? Nakasendō, also called Kisokaidō, was one of the Edo Five Routes (Gokaidō 五街道) named Gokaidō during the Tokugawa feudal period, linking the cities of Tokyo and Kyoto. It had an important role in connecting the capital with different provinces. The most important of the routes was Tōkaido Road between Edo and Kyoto, tracing the Pacific coast. Tokugawa Ieyasu began construction of the five roads to increase control over the country in 1601, but Tokugawa Ietsuna, the fourth shogun of the Tokugawa Shogunate, declared them as the nation’s major roads. Thus, a number of shukuba (post towns) were built along the routes so that travelers could rest, eat, buy food and stay overnight. The routes flourished due to the governmental policy known as sankin-kōtai, which required daimyōs (regional rulers) to travel to Edo on this route every other year, sometimes accompanied by processions of thousands of men.

One of the most important roads during the Edo era: Nakasendo

Let’s talk about the Nakasendō (中山道) trail. It had 69 stations and crossed through provinces of Musashi, Kōzuke, Shinano, Mino and Ōmi. In addition to Tokyo and Kyoto, Nakasendō passed through the current prefectures of Saitama, Gunma, Nagano, Gifu and Shiga, with a total distance of about 542 kilometer.

Nakasendō Trail translates to “the route through central mountains,” as opposed to Tōkaidō which means “the eastern sea route.” The Nakasendo was considered a safe and good quality road, so many famous people as well as lords traveled the path regularly.

In early Edo period, many political, legal, cultural and intellectual changes took place in Japanese society, including the renovation of the road network. Before these official trade routes were set up, many shorter routes connect small cities. One such route was Kisoji, which consisted of eleven stations that later was migrated as a part of Nakasendō, from Niekawa-juku to Magome-juku. Before the Edo Period, the route hold two names: Sandō and Tōsandō, as time passed by, the name was changed to Nakasendō in 1716 during the Edo period.

Although there are many modern buildings along Nakasendō, some original building plots remain and others have been restored in recent decades. The best-known section is in Kiso Valley between Tsumago-juku and Magome-juku, which is very popular among travelers nowadays. This area is also related to the writer Tōson Shimazaki who chronicled the effects of the Meiji Restoration on this area in his novel, Before the Dawn (Yoake Mae). This 8km-long path is a pleasant walk that provides the opportunity to enjoy the preserved traditional architecture of Tsumago-juku and Magome-juku. The walk between these historic resorts requires two to three hours of walking through the stoned pavement with stunning views of forests and waterfalls.

In this article, we’ll chronicle the long path starting from Nakatsugawa Post Town (close to JR Nakatsugawa Station) all the way to the Tsumago Post Town.

Starting your journey at Nakatsugawa Station, where there restaurants for any price range, enabling you to stock on calories and energy before you set off! For a several hours hike, noodles such as soba are a good option.

Make a stop at Asahigaoka Park with a few toriis, famous Japanese lacquered red gates that typically mark the entrance to Shinto shrines.

The roadways are not busy with vehicles but please try to walk in the pedestrian zone.

You will often find hiking trail signs on the Nakasendō, but you only need to follow the specific road surface to stay on course, an elegant asphalt tinged with yellow pebbles–a yellow brick road of sorts.

You will have an opportunity to glimpse the daily life of local resident or their craft creations on the side of the road.

Peaceful landscapes offer a welcome break along the hike. You’ll find rice fields as far as the eye can see, foregrounding lush mountain ranges, as well small narrow streets and other groves and small temples.

Our next shukubo is Ochihai-juku. The highlight of this post town is Ochihai-juku honjin, which used to be an accommodation for lords and castellans who entered through a special entrance, out of respect for their rank and also for security reasons. They always had to keep themselves safe, ninjas acting as bodyguards, checked the roof to observe from afar a potential attack from enemies. From the roof there was access to a room directly near the dining room that enabled bodyguards to reach the lord immediately. Even if this defense was not enough, they could attempt escape through one of the honjin’s many tunnels or secret walls.

The highlight of my visit is Tsumago Post Town. Composed of dozens of traditional Japanese architecture, the town has maintained its authenticity. With quiet and relaxed atmosphere, you can find unique specialty restaurants or shops selling small traditional and regional snacks as well as various artisan crafts.

In addition to those who love to sneak down small side streets like cats, getting lost in these alleys is a pleasure as architectural details are stunning. It’s almost as if time stops in these narrow passageway, contrasting with their grand mountainous and wooded surroundings.

Each shop has little secrets no matter whether owners can tell you about the region, just like there are a few unexpected culinary surprises that come out of their stoves without warning or decorations.

If you like a challenge, start your hike from Nakatsugawa Post Town as there is a lot to see! The total duration is about 13 km, but it is definitely worth it. After visiting Tsumago Post Town, you can go to JR Nagiso Station, then back to JR Nakatsugawa Station to discover the areas in depth and stay in Nakatsugawa.