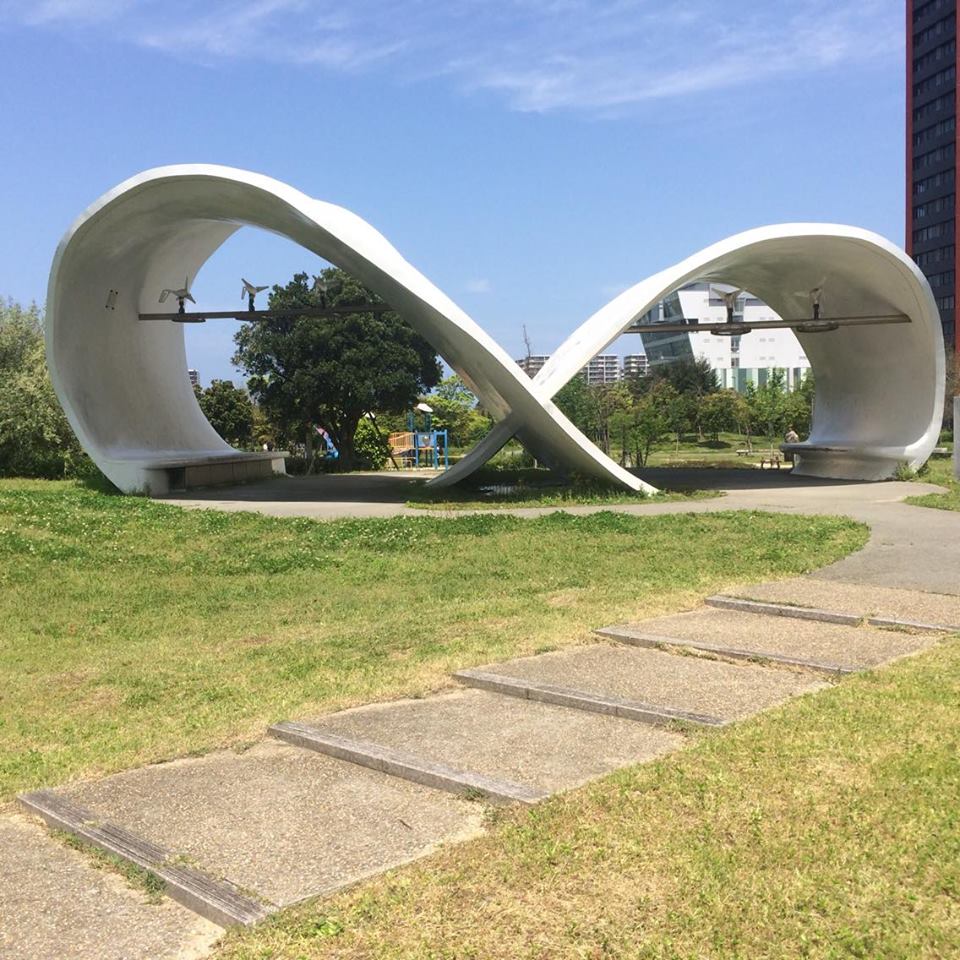 Fukuoka port is a grand array of shipments being taken from ship to truck. Its vessels and depots are staggeringly tall, and it’s avenues a broadness square to the entire sky above.

It’s effluent disruption of Fukuoka bay is a brief break from blue to green. In equal widths, with an architect’s scope surpassing the grey of industry and banding a characteristic Kyushu green to a livable space, is island city’s park. 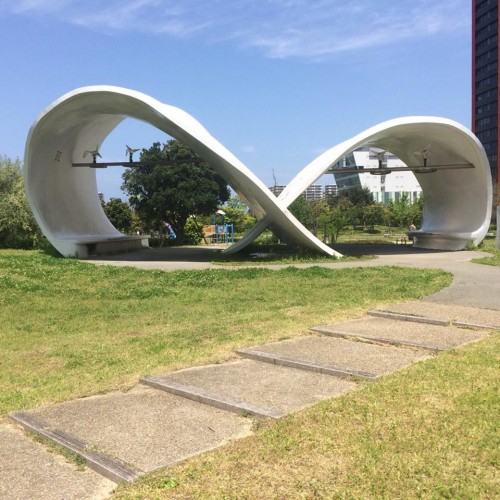 Island city has grand design in its burgeoning skyline. One residential complex constitutes three towers arranged in a triangle. Three plazas hang suspended between the buildings, small ingots of utopian design. One other building is iron red, a color of a rich clay striation. A last residence swirls in conch-like complexity up to the sky. The park exists in the open space between, in a bright persuasion by the skies of the sea. These pieces protrude like colossal sundials to the garden park. 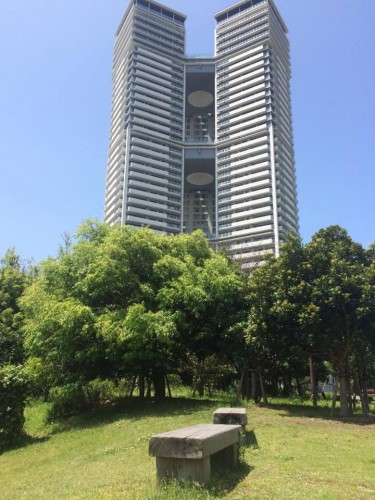 The architecture of the conch in orange to the park’s east is a precedent to the southern entry. Before a broad and winding Seuss road is a Möbius strip in an infinite bend. A crow sipped water underneath the shady cover of the white strip, flying away to the sun-yellowed hue of the park as I approached. Cropped grasses bobbed in hills just beyond the gateway sculpture.

We crawled like caterpillars into the sun, every vertebra in a loose cycle of ease then tension as we made ever-relaxed steps into the southern space. The pathway pressed into the scrunch of the gently landscaped slopes. Angles in the surrounding buildings shifted as we touched the slightest bit of hill, tempering them like planetary pillars twisting out of the gravity well. We continued insectile under the high sky.

The park is bisected by a tree-lined road, and this road runs from port to channel underneath a bridge. Each side has a concrete spool of a stairwell, wound with wiry guard rails. They thumb to a wildly green underside of the crossing bridge. Vines stick to and droop from here, trailing like a healing suture line on the concrete. 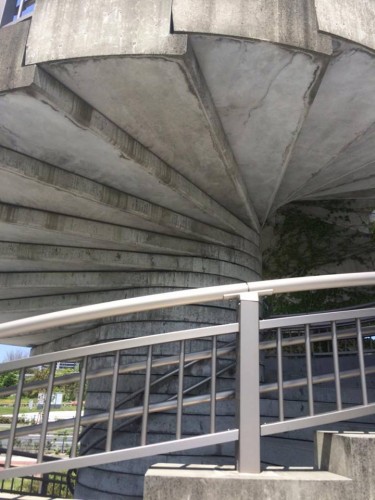 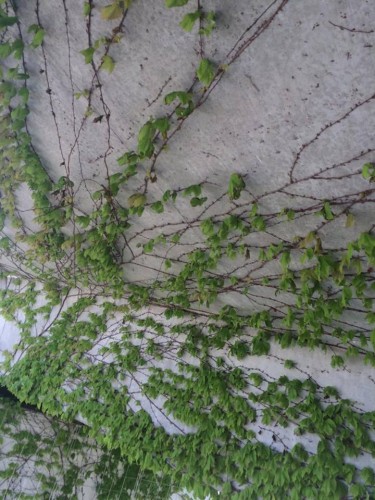 The sun beats down on island city. Over the bridge and in the open, the greatest shadow is in the crease of your squinting. The main green of the park dips to a pond, shivering slightly in the bay breeze. While this face of green and blue is the sun’s darling, it’s vernal ornamentation hides away a magnificent shade. Across the western end of the main space is Grin Grin.

Hills bare of trees though they are, the installations at architect Toyo Ito’s creation Grin Grin open like eyelids to shadowy green arches of brow. The darker openings show dreaming windows, containing images of tropical fishes and exotic greens. We went on a closing day, so a sleepiness pervaded the place, though the life of its contents were glimpsed, though glazed. 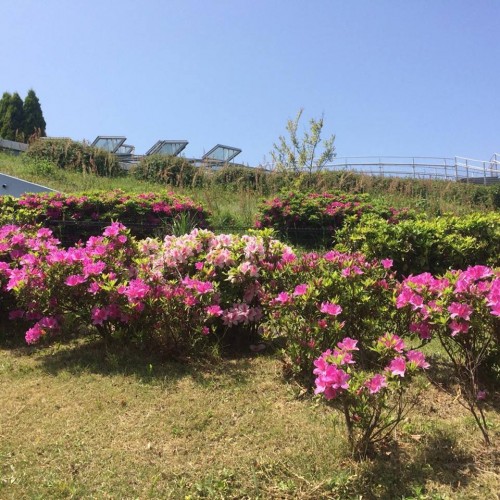 Trailing the flowered bushes bounding Grin Grin outside, streaks of light leapt across the hilltop. They were windows arrayed neatly as rice paddies, letting in light for the resident foliage. Where no bush sat and no window laid, a walkway carried on the parabolic curvatures of these park hills.

Grin Grin is segmented into three hills. Popping into an opening between two like the edamame pod it resembles, shade is ample. The entrance to a greenhouse, with a panoply of butterflies and jungle fronds and flower, is in the center segment. Prices as low as island city to the sea, one can enter and walk to those tenderly tended grasses of the hill roofs. Gardeners and landscapers sat lurching nearby, ready to clip a flower or crop the grass even on this idle day. 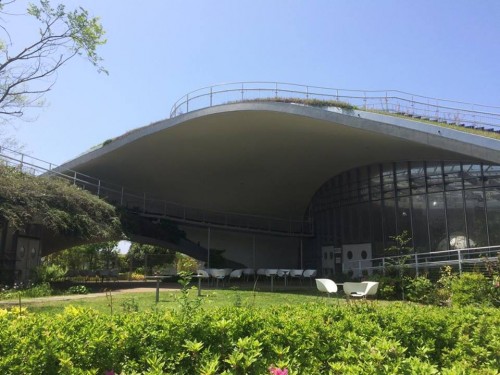 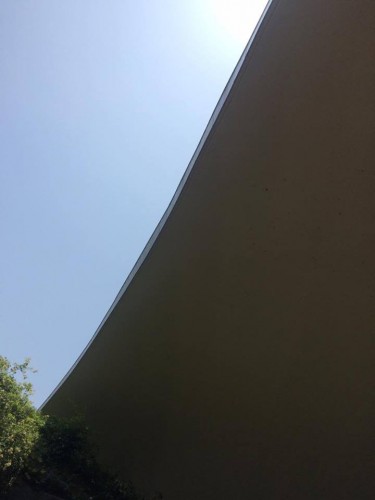 The third pod of Grin Grin’s shows an almond mass aperture. Dulcet and dainty though it was, music from a Ghibli film gently printed fingertips to the wide and winding plaza ceiling from a small doorway. Other than small plants fit for a pressing along the edge of the pod, this indoor plaza was only placed with tables and chairs. Movement in the dome came only in mirage shimmers of greenhouse warmth. 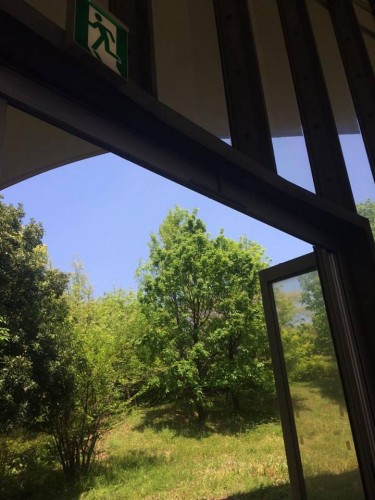 Centered in Island City Park is a structure that seems a harmony; a magnetic cluster of metal filings arranged after meticulous ages or by ageless Martians. Other white rings are available for seating, in divots and an even pivot. It’s a playful reminder that this green matter is of a conscious sculpt. 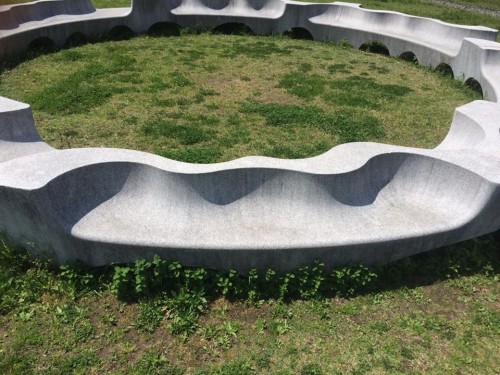 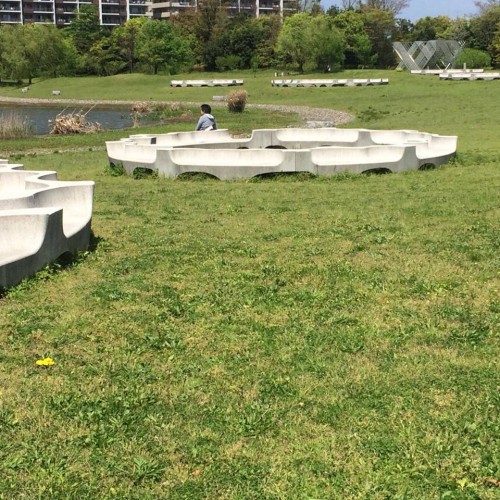 A thin barrier line of trees on the wet lip of the pond envelopes the main green away from the park’s flowering garden and playground. Here is where most of all the visitors spent time, families with picnic spreads under the spread of trees.

From JR Hakata station (Fukuoka), take Nishitetsu 29 or 29 N bus to the Island City Chuo-Koen bus stop. It costs 430 yen and between 30 and 50 minutes.