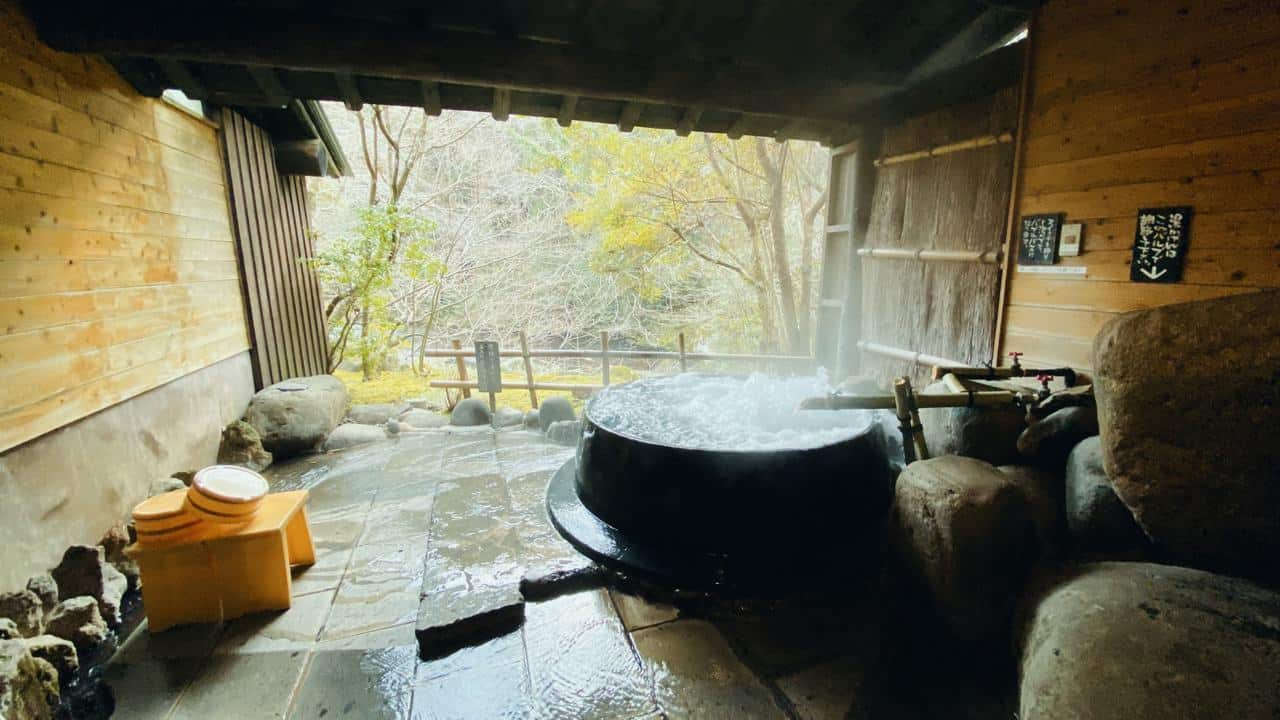 Staying at a ryokan with private onsen in Hita, Oita, Japan

Have you ever experienced staying in a ryokan with a private onsen? In my point of view, this is one of the best accommodation options when traveling to Japan. And, without a doubt, spending the night at the Tensui Ryokan with onsen in Hita (日田市), Oita Prefecture (大分県) is an unbeatable adventure.

From the moment you arrive until the moment you leave, you are immersed in nature, onsens, luxurious rooms, incredible food, and the hospitality of the staff. It is a stream of endless delights connecting one to the other.

When I arrived at Amagase Station, there was a car waiting to take me to the hotel. Tensui ryokan is a 19 room ryokan nestled between the mountains and the only way to arrive is by private transport.

Once I arrived, they helped me with my luggage and they guided me to the entrance, as it is totally hidden by nature. Before arriving at the main entrance, I visited their souvenir shop. I recommend the yuzu manju (柚子饅頭 – a rice dessert with a citrus flavour).

After the check-in, I ate a small aperitive in the restaurant. I admired the unique architecture of the building and I noticed that there were many wooden elements and in some parts, you can see the rocks of the mountain incorporated into the structure.

This ryokan was constructed next to the Goraku River and you can hear sound of the Sakura Waterfall from some of the rooms.

Before going inside my room I removed my shoes, as it is normal to do it in a Japanese house. Japanese customs around good hygiene are very strict; you can’t step inside with the same shoes you wore in the street, and you have to wear special slippers to go inside the toilet.

As for the bathroom, please take note that there aren’t any showers inside the rooms! In order to take a shower, you have to use the public baths. This is something I’m going to mention later.

The room was divided into two parts: the anteroom with a sofa and a small brazier, and the main room with tatami (畳- a soft traditional Japanese floor), which is perfect when you are not wearing shoes. Another good reason not to walk inside with outdoor shoes.

The main room was multifunctional, a dining room during the day and bedroom at night. The bed was a futon (布団 – the typical Japanese bed on the floor) which was kept inside the room’s wardrobe. Before going to sleep, one of the staff members will prepare the room for you. In the morning, the same person will rearrange the room again in order to enjoy the room as a living room. That is perfect!

Inside the wardrobe, there was another surprise: a yukata (浴衣)! It is a really comfortable cotton easy-to-wear kimono. Many ryokans offer it as comfortable attire to wear as you walk around the facilities of the hotel. As there are usually nearby hot springs, these clothes are very practical to put on and take off easily. In winter they also offer you a tanzen (丹前 – a jacket ), so you can go outside without getting cold.

The private onsen of Tensui Ryokan

After having a rest in the room, I put on my yukata and went for a walk around the outside of the property to get to the private onsen. The stroll was short but full of natural elements: trees, moss, water, rocks… it was a daydream. I visited during February and the environment had a charming Tim Burton film’s style.

Altogether, there are five private onsens that you can reserve. More accurately, they are called rotenburo (露天風呂), as they are onsens in the open air. When you make a reservation, you have 90 minutes to enjoy your private and natural space. I had the chance of visiting three onsen and using one.

My reservation was at 6 pm. It was already dark and the temperature was 2ºC. There wasn’t any light when I entered the room, and when I turned the lights on I saw that relaxing place, but the air was so cold! Would I dare to take the yukata off?

I have to confess that it took me a while. But finally, I took the yukata off really quickly and I quickly showered off. It is compulsory to take a shower before entering the hot springs, as the water is pure and it has to keep like this.

In fact, the shower helped me to heat my body up. After that, I entered slowly inside the onsen. The water was really hot but the outside air was so cold that it gave me pleasure. I stayed in the onsen for 20 minutes and my body thanked me, as the hot water relaxed my muscles. I also could see the river and listen to the murmur of the water in complete silence.

Tensui ryokan also has public baths with hot springs. There are two outdoor baths, from which one you can see the Sakura Waterfall and one indoor one.

How to use public bath?

Usually, public baths in Japan are separated by gender. First, you have to take a shower and clean yourself with soap. After that, you will be clean and prepared to go into the onsen.

The rules of the onsen are clear: don’t clean yourself with soap inside the onsen, don’t put your towel in the water, and don’t enter the water with clothes of any kind. Water can’t touch anything except your skin. And remember, no picture in the public space, it is totally forbidden!

There is a stereotype that ryokan dinners last forever, and I can agree. My dinner lasted an hour and a half! I was in my room and a waiter was bringing me many dishes and explaining to me what I was about to eat. He was really kind and although he couldn’t speak perfect English, he tried as many ways as possible to communicate with me.

A picture is worth a thousand words, so… I will show you what I ate for dinner!

Last, But Not Least… The breakfast!

At 8 am the next morning I went to the shared dining room for my breakfast. It consisted of an all-you-can-eat buffet with eggs, natto (納豆- fermented soy), salad, and pickles. At the same time, at your table, they served me a variety of Japanese traditional dishes, miso soup, and rice. The star dish was a big mushroom cooked on a Japanese-style grill.

The ryokan‘s price includes two meals: dinner and breakfast. Remember that at many ryokans, the price is per person, not by room.

I also had the chance to speak with the hotel’s director and he was really interested in my opinions of my stay. They provided me with a day of relaxing and forgetting about the real world. So, my answer to the man was thank you for creating that ryokan with onsen, a paradise on Earth.

If you want to know more about Oita Prefecture, please read these articles:
– The samurai town of Kitsuki and the Kunisaki Peninsula
– Oita city
– Beppu, the onsen city
– Oita’s little Kyoto – Mameda Town in Hita

How to Get to Tensui Ryokan in Oita

From Tokyo or Osaka, you can take a plane to Fukuoka Airport.

When you arrive in Fukuoka, it is an hour and a half by bus or train to Amagase. Finally, from Amagase Station you can take the personal car of the ryokan with a previous reservation.