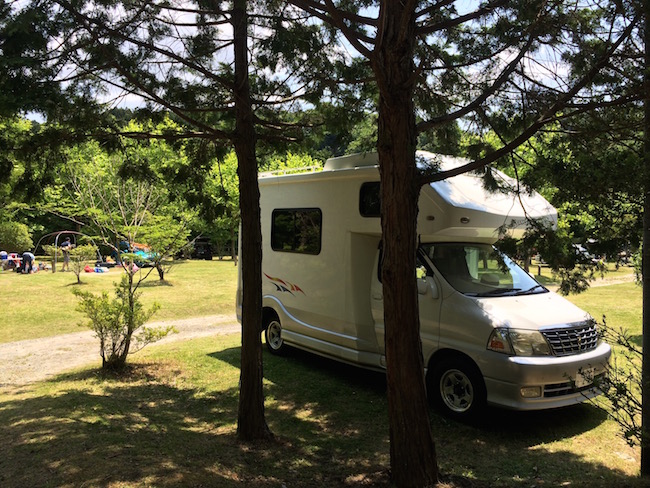 Forget the Cities! A Glimpse into Japanese Camping 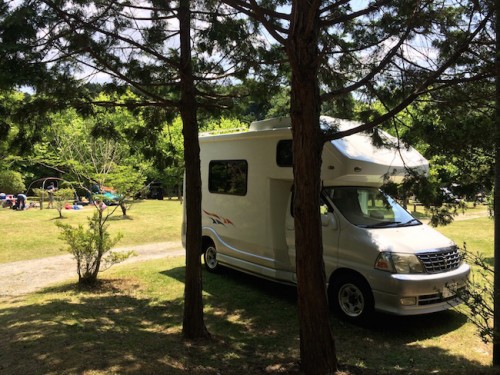 Many people’s image of Japan is filled with neon lights in never-ending cities and temples carved out of wood older than ourselves. But what some may not know, is that Japan is actually covered in more forestry and mountains (70%!) than the inhabited areas. The lush green landscape outstretches concrete city mazes, but without a car, it’s sometimes hard to get out and experience this side of Japan.

Five friends and I – all of whom are either American or British – decided to get out of Tokyo for a weekend in May to camp overnight in a destination not so far away. Through our journey, we discovered how different camping can be in Japan compared to what we’re used to. Before I share camping stories, let’s start with the basics for camping in Japan.

Where should I Camp?

If you’re anything like me, you may sometimes wait until last minute to make reservations. And if you’re like me, you’ll be reminded every time about how much more Japanese people plan ahead. So here I was, 3-4 days before the camping trip, thinking it was enough time to get a reservation at any campground I desired. I used two search engines, Nap Camp and Japan Auto Camp to look at locations, amenities, pictures, and reviews. Sadly, it’s all in Japanese, though the latter is a bit easier to navigate without being able to read the language. From what I found, glamorous types of camping were more common within an arm’s reach from the Tokyo area. Many had BBQ pits, cabins, playgrounds, bath houses, events…just to name the like.

Sifting through the campgrounds that were too high maintenance or geared towards families (we didn’t want that!), I called around to the remaining few candidates. Some were already full, some didn’t have an autocamp spot large enough for our camping van, and one that looked really nice (river and all!) didn’t have roads that were safe enough for us to drive through. After getting tossed around on the phone from campsite to campsite, I stumbled upon Roman no Mori (ロマンの森) where we settled for the weekend. With the vast number of campgrounds all over Japan, if you make enough phone calls or look around online (a simple Google search also works), you’ll be able to find something in time. 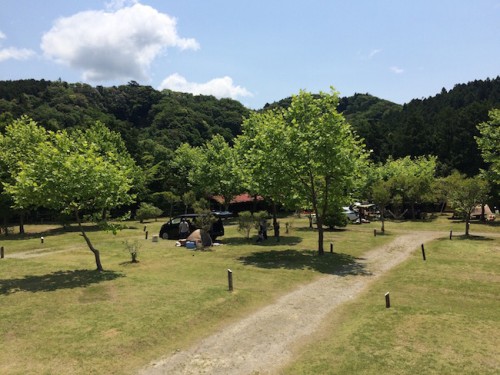 Roman no Mori campsite after many families already departed on Sunday 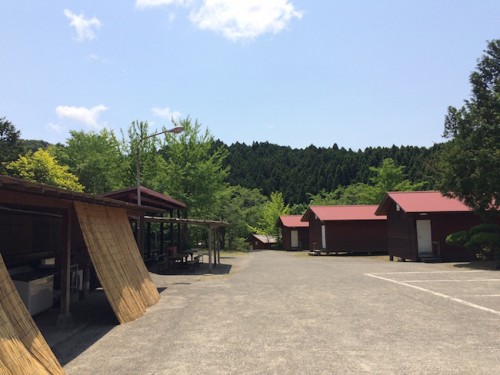 Roman no Mori check-in hut to the left, cabins to the right

What should I Prepare?

Gear: If you’re traveling through Japan or living here for a short time, the likely chances of you having camping gear is slim. Believe it or not, camping gear can be bought or rented for pretty cheap in Japan. Many campsites have gear you can rent, from tents to camp chairs, BBQ grills and fire pits. I guess the art of hospitality (omotenashi) rings true even in the woods! The site we picked didn’t have tent rentals, but I was able to buy a three person tent from Don Quixote (ドン・キホーテ）for less than ¥5,000. But since we had the RV, four out of six of us were also able to sleep inside. 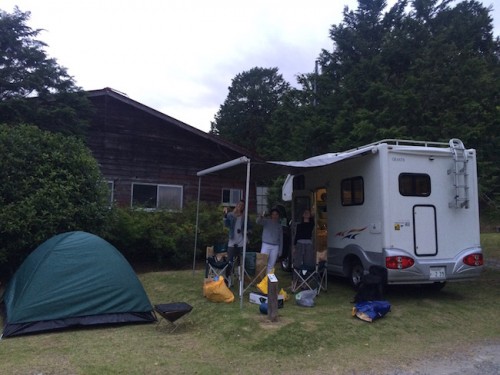 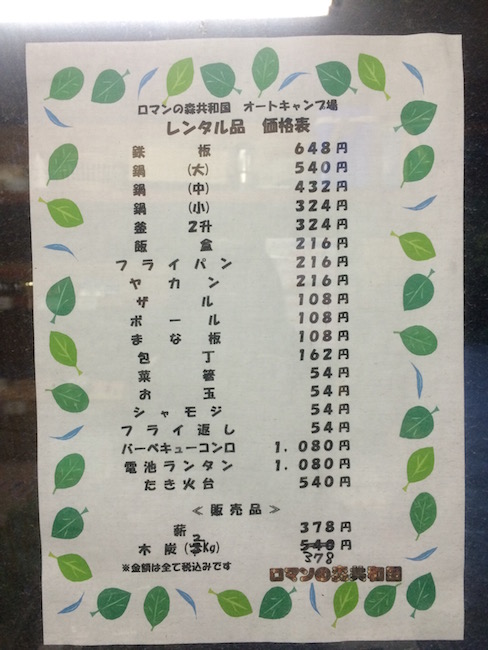 Food: It’s surprising how many conbinis are still out in the countryside! Even through our drive by rice fields and open skies, we came across 7eleven after 7eleven, and a few other chains. But a supermarket, which is what we wanted, was not as common and can be tricky to get to. The best is to stop at one when you’re still in the city, or plan ahead to know where exactly one is in relation to your campsite. We had to drive about 20 minutes past our campsite to get to one due to our lack of planning. On the other hand, the good thing about going to a supermarket near campsites is, they had more camping related food items! Which brings me to this….

Part of the romanticized camping life in Japan is the BBQ tradition. The supermarket we went to already had pre-packaged BBQ sets which had marinated meat and pre-cut veggies in another pack. This made our BBQ experience so much easier! There were pre-packaged options like Korean BBQ, garlic pork, etcetera. Of course, there’s the option to buy the meat and sauce separately, but the price wasn’t that different. And fear not if you forget to pick up something at the store, because many campsites also have an on-site store. At Roman no Mori, the check-in hut had cup noodles and udon, fire starters (we got coals and firewood here), and toiletries. When we realized we forgot the grilling rack for our fire pit, the staff kindly lent us one for free! 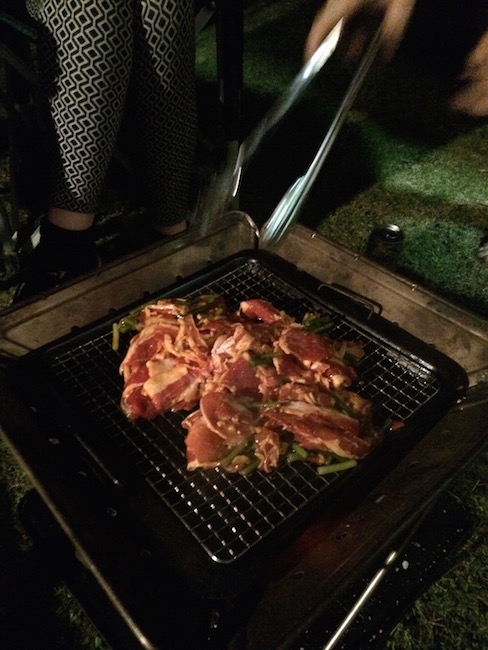 The pre-marinated Korean BBQ and veggies 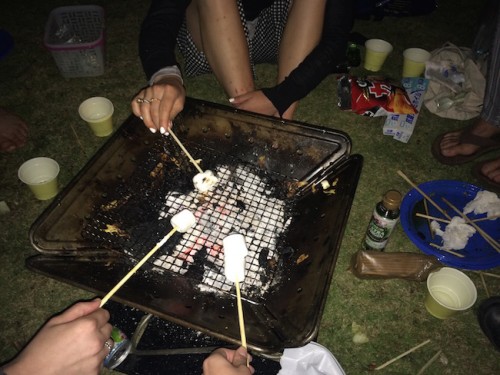 We even made s’mores and used chopsticks as sticks!

So How was the Campsite?

The campsite amenities included running toilets, showers for ¥200 (for ten minutes), big sink to wash pots & pans, and an area with lots of dining tables. The staff was super friendly and helped us with any questions we had. The area they gave us for camping was very spacious too, and it wasn’t too crowded when we camped. There were designated quite hours and fire-out time, though that’s common in populated campsites like this one. All in all, it was a site with more amenities than not, but still with a calm countryside feel. If you’re looking for less glamorized camping (like what we were all used to back home!), you’ll be able to find sites like such too, using the auto camp search tools online. 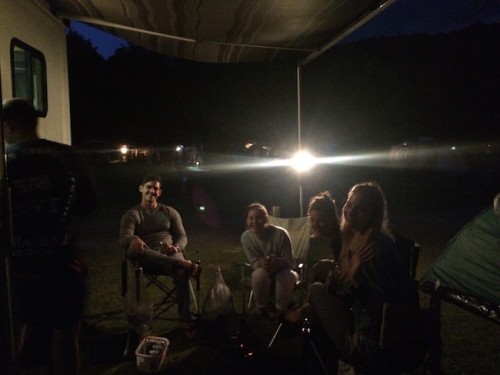 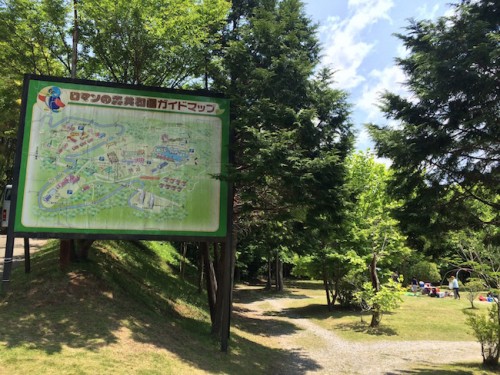 A guidemap of Roman no Mori 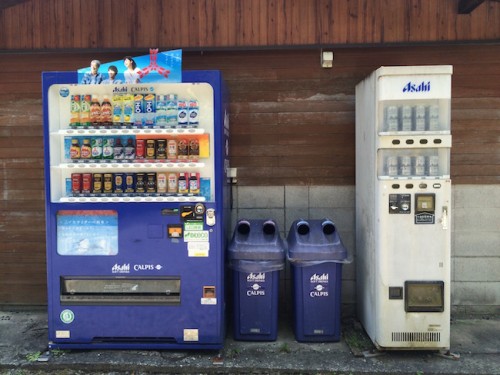 Vending machines by the shower! A rare Asahi beer machine, too!

What was There to Do?

Roman no Mori offered a forrest full of activities down the road from the auto-campsite. Though the campsite is separated from the rest of Roman the Mori, the main area has hotel accommodations, a bathhouse, and play areas like the pictures below. There are dining option on site as well as shows that are put on stage every few hours. It was a quiet Sunday in the bit rundown site, but we had a lovely lunch here and walked around. Despite all my looking, this place was quite family-oriented after all. 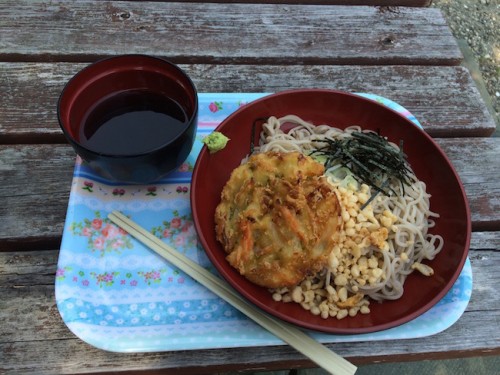 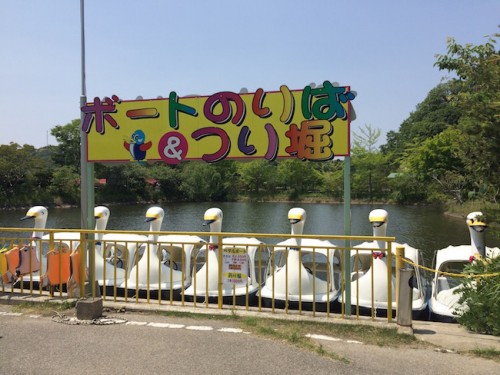 Swan boats and fishing at the lake on site 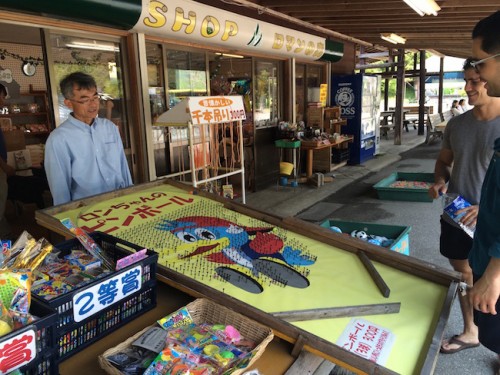 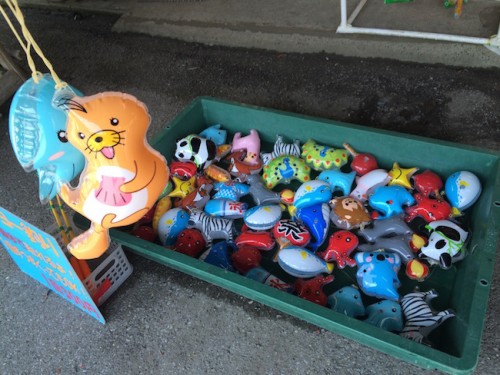 The fishing game where I won these prizes! 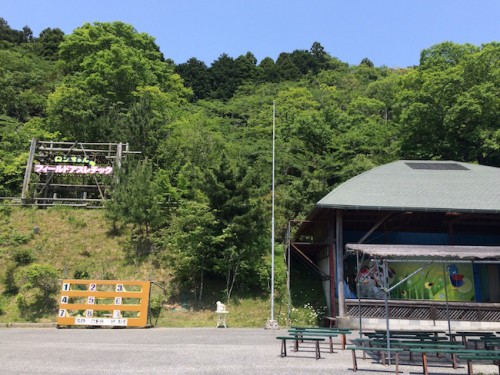 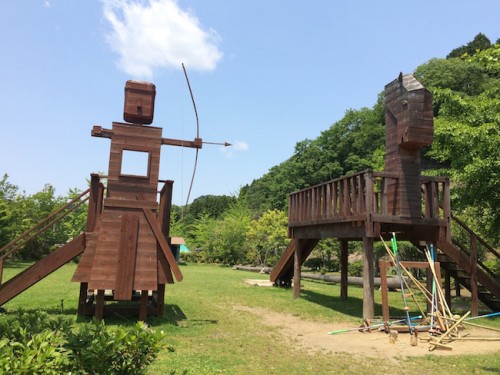 Want to know what it’s like to drive in Japan for the first time? Curious about the RV we traveled in? You can rent one too!

Read about it all HERE