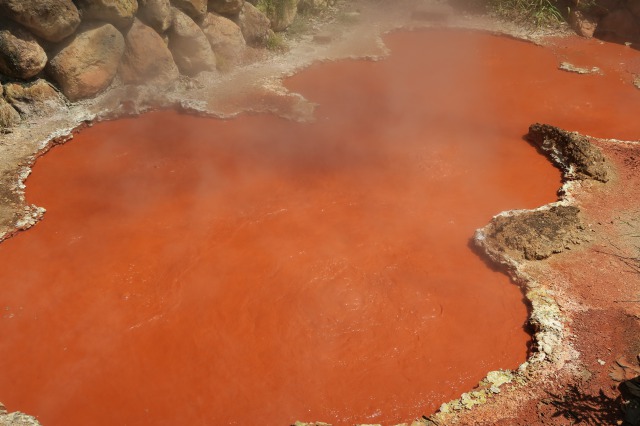 Never did I think that one could take the words “go to hell” so literally, yet there I was standing in and amongst the steamy pits of reds, serine blues and bubbling muddy greys, the likes of which one could only liken to hell. And thus the scene of steamy puffs of smoke scattered amongst the landscape led to name of these famous tourist attractions. The Jigoku Onsens (Hell hot springs) are certainly not for bathing. 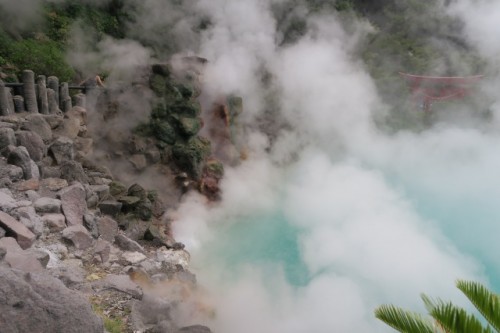 It appears as if something out of a movie and, being from England, I had obviously never seen anything like it, nor knew that anything like this could ever exist. Yet there it was, creating exciting streams of smoke billowing off into the air as though something were on fire and capping off my final day in Beppu with one of the most memorable experiences of my life.

Take the bus numbers 5, 7, 9 from Oita station to Kannawa bus terminal, or the Yufurin bus to a slightly closer stop, Kannawa iriguchi. Be sure to visit the information office in the train station before you leave as they can give you an English Jigoku tour information sheet, bus timetable and a discount coupon. They speak English and can direct you perfectly to the bus stop, located just outside the station’s front entrance. 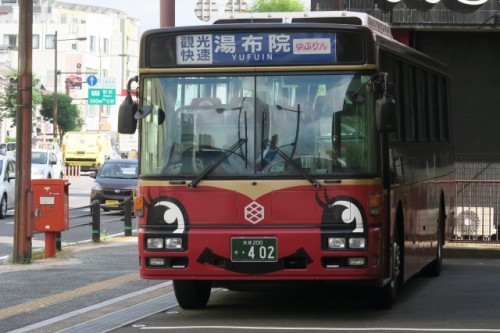 You can pay to enter each hell separately (¥400 each) or pay to visit all eight for ¥2,000 (or ¥1,800 if you have a coupon). Since each hell is completely unique, I would really recommend the ticket booklet, and you get a souvenir nice picture booklet at the end. 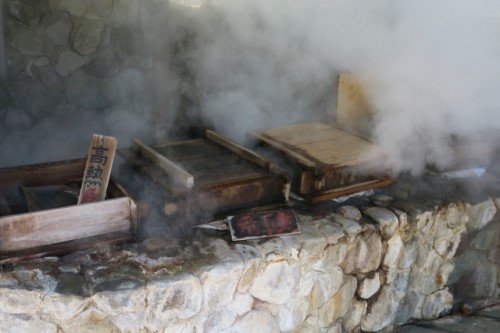 Chinoike and Tatsumaki Jigoku are located a little further afield, meaning you will need to take a bus to visit the final two hells. Simply head back to Kannawa bus terminal and get on bus number 16/16A to Shibaseki. Get off the bus at Chinoike, or when you hear the English tourist announcement. Get back on the 16/16A bus when you’re finished to go back to Beppu station, which takes about 40 minutes. 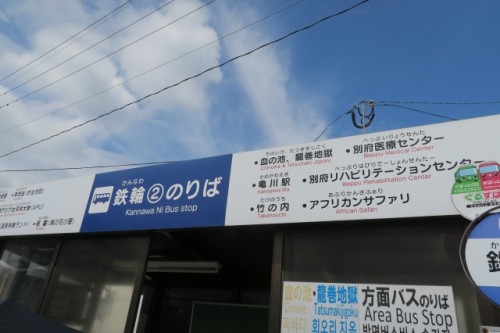 All the Hells are very simple to get to, especially considering  you can see the literal steam rising in the air from each of the sites. There are also English signs everywhere if you need them.

The first hell was definitely the largest and most spacious of all the hells, not to mention ridiculously photogenic. With it’s large mass of bubbling aqua blue water, secondary orange coloured hells, lotus flower pond, foot onsen (bath) and the largest souvenir shop of all the hells, it is the best hell to see if you’re only going to one. It is also one of the only hells where you can buy pudding made by hot spring steam and eggs that have been boiled in the bubbling aqua water. The people of Oita seem to utilise their steam well, pumping it into greenhouses to create beautiful tropical gardens such as the one at Umi Jigoku, and using it in various places to steam a variety of foods. Definitely don’t miss the opportunity to witness this hell! 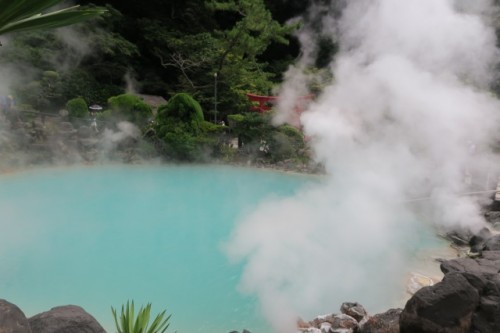 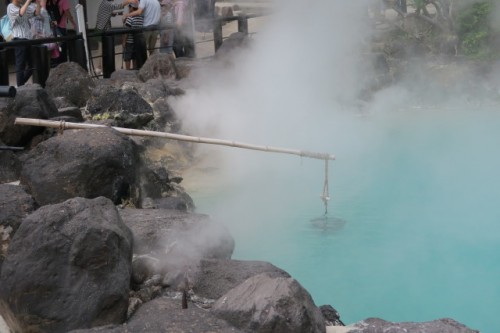 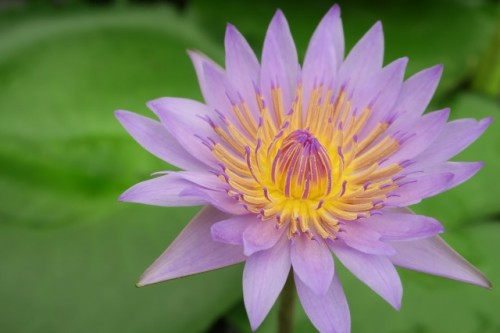 To the left of Umi Jigoku is Oniishibozu Jigoku, the ‘Monk’s shaved head’ onsen, so named because the perfectly round bubbles supposedly resemble a bald monk’s head before they explode. Though I find this image completely bizarre and somewhat disturbing, the hypnotic bubbling and popping of the boiling, metallic mud make it one of the most unique acts of nature I have ever witnessed. This hell is well worth the visit, particularly as there is yet another foot bath here. 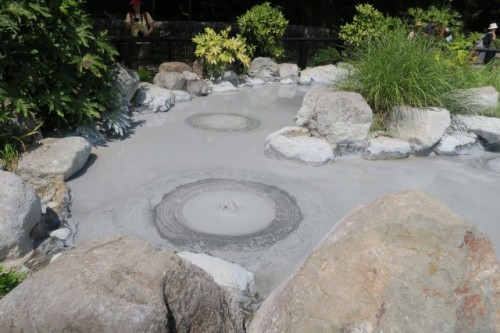 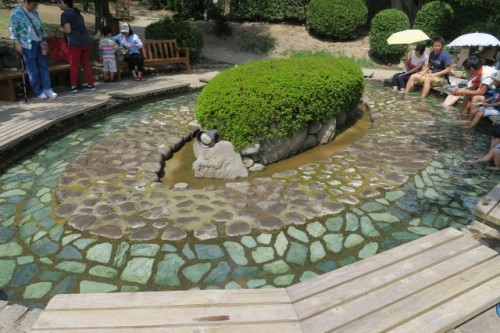 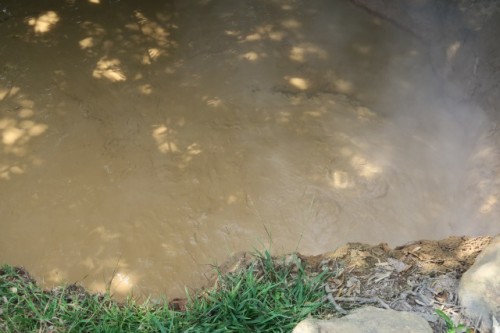 The name of this hell sounds particularly inviting for me, though there was less food there than I had hoped. In fact, this hell is so named because it used to be used for cooking a long time ago, though since then they have stopped, possibly for health reasons. Despite this, the name still lives on through image of the great, red demon, Aka-oni, looking menacing whilst standing on a large cooking pot and stewing some poor, sweaty creatures. 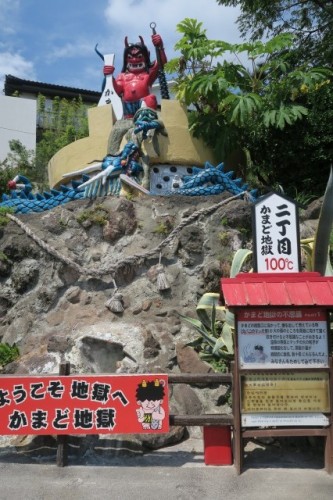 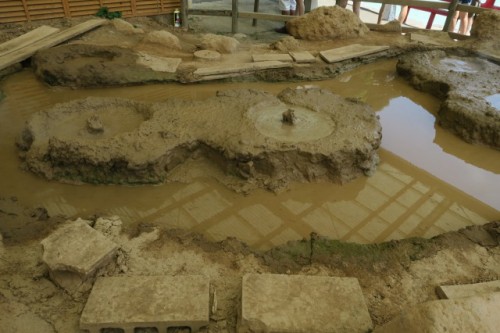 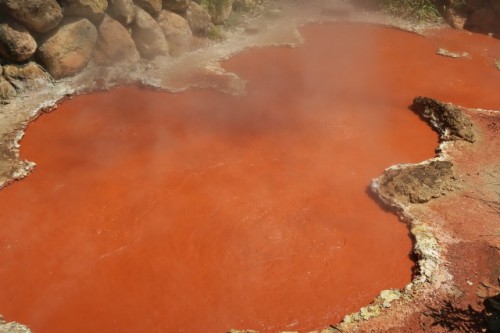 The aqua blue waters are similar to the ones seen in Umi Joguku, but what I liked the most about this hell was all the information it translated for you in English. It was interactive, informative, had a foot bath and sold ice cream, all of which are great incentives for a visit. 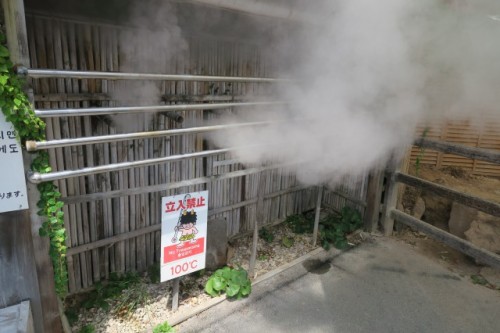 If you like having the pants scared off you, this is a good Onsen to go to. I, myself, am not a great fan of creatures that could devour me in seconds, so I was fairly reluctant to enter the hell that features masses of Malaysian crocodiles enjoying the heat of the onsens. According to the English information signs, the pools present the perfect conditions for breading, though I can’t say I stayed for long, especially considering one crocodile shot its beady eyed, piercing stare straight into my soul and, without even moving, managed to make me release an embarrassing little whimper. 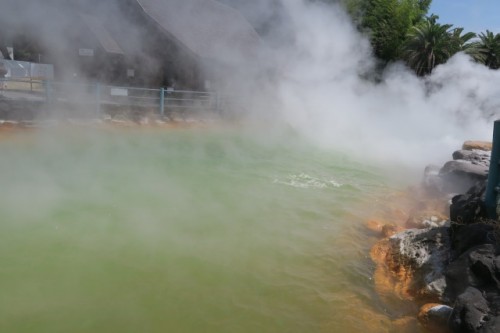 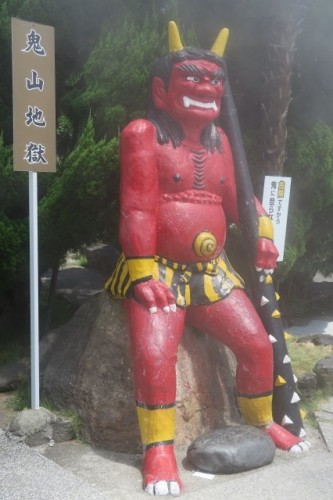 While the hell is named after the milky, white appearance of its main, steamy pool, the actual focus seemed to be on tanks of piranhas and other ridiculously creepy, tropical and unique fish, the likes of which I had never seen before. 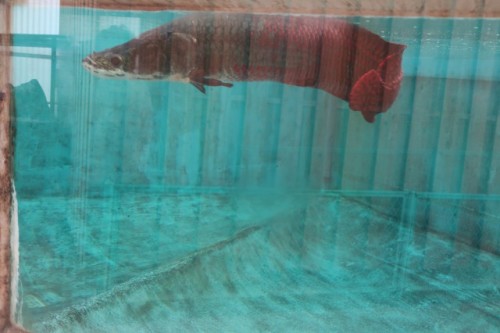 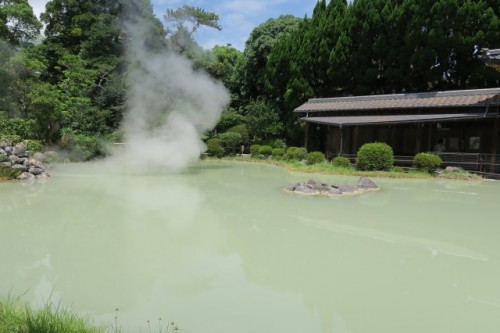 If the name isn’t enough to entice you in, perhaps the promise of some natural, mud skin treatment will. The pool is not the brightest, blood red you could imagine, as the clay mud which becomes your skin treatment, turns the large mass of water into what resembles to me, a nice and delicious tomato soup color. Regardless, seeing such a large mass of water that is steaming and not, in fact blue, is reason enough to visit this simplistic hell. 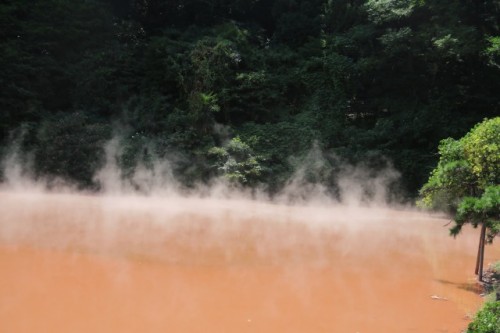 The hell tour finishes with a literal ‘bang’ at this final site. Located right next to Chinoike Jigoku, Tatsumaki is a geyser that spouts a steaming, hot steam of water every 40 minutes. It is one of the only geysers in the world that erupts so frequently, making it a particularly popular attraction among the masses. Be sure to check the time of the next eruption at the entrance, so you can perhaps visit Chinoike before, or even grab some food at a nearby restaurant. 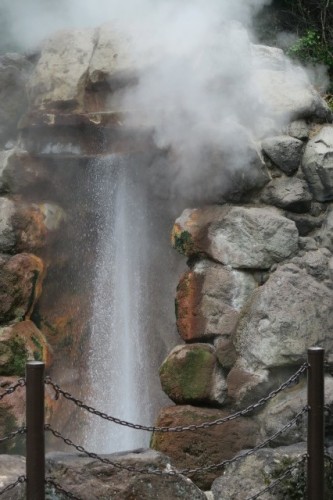 Seeing the power and wonders of nature in this way is truly mind blowing, not to mention it is probably the only place in the world that you can see and experience something like this. For a free souvenir of your trip, take a blank book and collect all the stamps at each Jigoku along the way. So, why don’t you “Go to Hell!” the next time you’re in Japan? 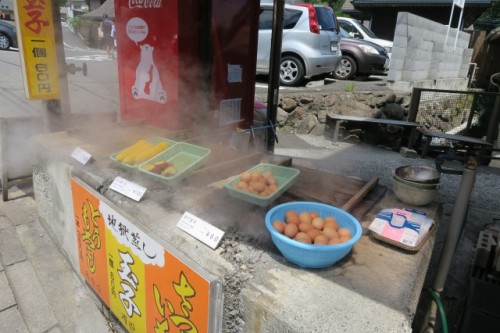