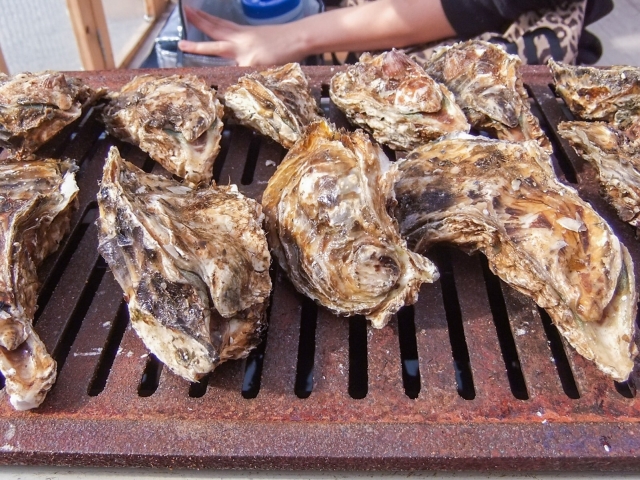 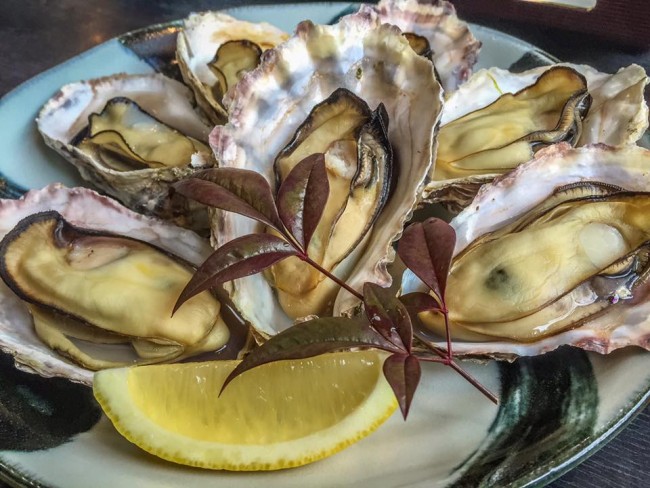 With seafood, a typical foreigner is aware of Japan’s sushi and perhaps consumption of the poisonous blowfish. But, knowing a Japanese foodie friend for long enough, you will be exposed to other fruits of the sea.

As Hiroshima, so is my home region of the United States with seafood as regular fare for summer snacking.  Clam strips can be found at stands by the sands; a real casual affair.  Mussels are slurped down easy.  Maine lobster can be priced affordable only to a yacht owner.  Yet, seafood is often something served in dockside shanties, and always food for a leisurely maritime time.

Fukuyama, Hiroshima prefecture’s quiet eastern city. We pulled into Kakigoya Fukuyamakouten (Oyster house of Fukuyama port) riding a small vehicle that could have been sputtering out fuel like a motorboat with its size and our destination. In a corner of Fukuyama harbor and next to a road of empty houses that blackened in the night was the lone twinkle of our oyster shack.

Such placement, such voices over wining and dining dinner din, was the parallel of a New England seafood shack.  This eatery looked fit to blow out to sea with a little gust: plastic flaps at the entryway and a frame like a flimsy Fukuyama festival tent.  We pried open the flaps, flexing our oyster-opening muscles.

The entry faced an open “kitchen,” where you could see the young workers doing their job.  That job was, chiefly, hoisting buckets of oysters.  Fresh faces for the fresh loads of seafood, strung out from Hiroshima’s sea farms.  In the center of the waiting area was plenty of Hiroshima oyster paraphernalia.

We waddled between row after row of benches like mammals that might find mollusks as a more regular dietary option.  The width and volume of Fukuyamakouten reminded me of the beer halls so popular during Japanese summers. Each seat was an overturned oyster crate topped by a plank, and each table simply furnished in black. Our group of eight snuggled in, squeezed together like a more infamous seafood.

Ordering was simple.  We chose the hour-long all-you-can-eat (tabehoudai) course for around 3,900 Yen, and waited oyster-hoisting moments.  Alcohol is available, and oyster-opening could be as therapeutic as cracking open nuts while drunk.  A man and his partner behind the bead curtains a couple tables over had reached his revelry, filling the nearly empty oyster house with laughter.

Even before ordering our first oyster, crackling, explosive pops punctuated our “how much can we eat?” question. The Fukuyama oyster house sounds like a gun range at times, fragmenting oyster shells burst under hot pressure.  Don’t be frightened by sea-shell shrapnel, though!  The cooking method has a safety mechanism. 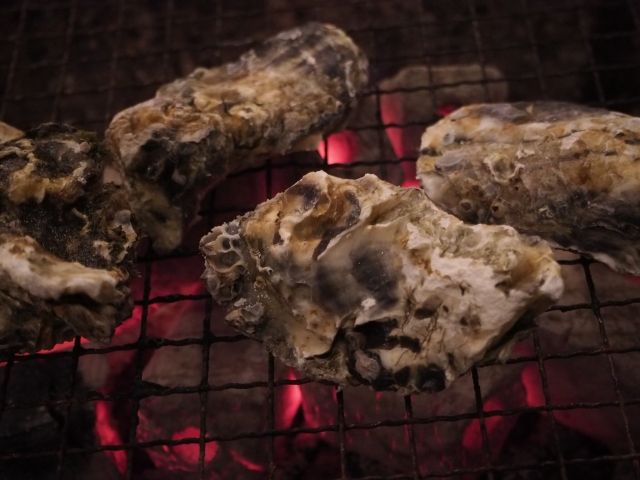 To cook was our responsibility, as the most load-bearing mechanical in the seafood shanty were the busied waiters and waitresses.  It also excites a drunken table to have the power to combust oysters in your hands. On our table were set hot plates, often used for a warm meal in Japan.  Additionally, for an assuredly thoroughly cooked oyster, a bowl is placed over top and the temperature rises to that occasional explosion.

To dispose of the shells, we shucked them into buckets lying under the table. The shucked-buckets are simply left for the oyster-hoisters.  After our hour, we simply went to the register to ring up as another oyster rung out a noise in the back of Fukuyamakouten. 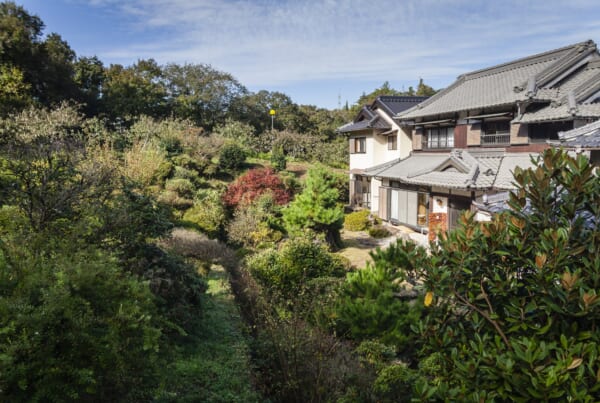 A Farmstay Experience in Oumi no Sato