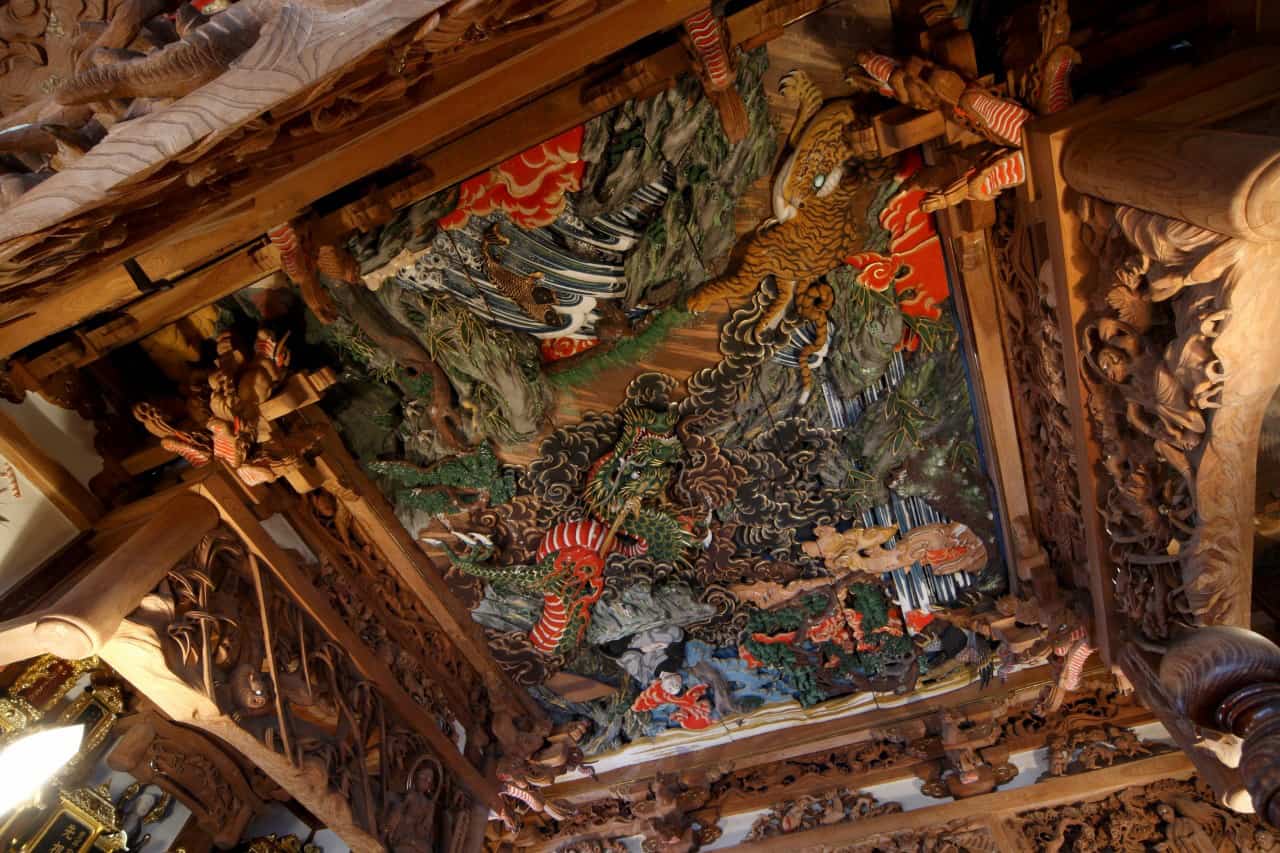 Uonuma is a small city in Niigata-prefecture that is famous for the artwork by Uncho Ishikawa, who was said to be the ‘Michelangelo of Echigo.’ His wood carvings and paintings can be seen in Eirinji Temple and Saifukuji Temple.

Uonuma is also famous for the high-quality snow that is great for skiing and snowboarding. I visited Uonuma in the middle of winter, the temples were covered by a thick layer of snow, and I took a sightseeing taxi from Koide station and spent 2 hours visiting Eirinji Temple and Saifukuji Temple. 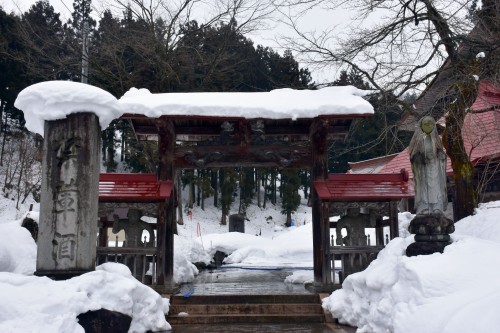 The gate to Saifukuji Temple in mid-winter 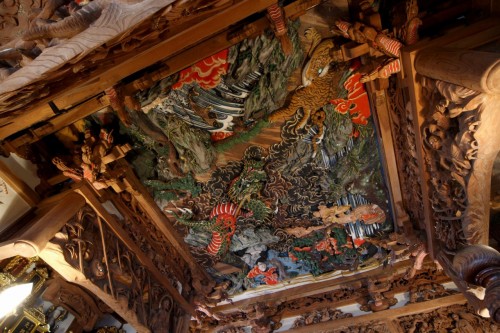 The strong colours of Saifukuji Temple

The strong colours inside the temples feel even more warm and vibrant when you come in from the white winter landscape. The best part of a day of temple-hopping in the snow is being able to stay at a local minshuku and get warm after a long day of sightseeing.

Price: 2-hour sightseeing taxi course from Koide Station to Eirinji Temple and Saifukuji Temple 6,200 yen. (Not including the admission fees of the temples).

Uncho Ishikawa was a master craftsman during the Edo-period and was seen as a genius in wood work. Some have even called him the ‘Michelangelo of Echigo’ because of his many stunning sculptures and wood carvings. Uncho Ishikawa was alive between 1814-1883 and was known as a humourous man. 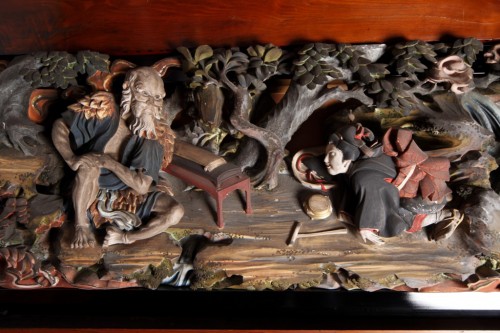 Uncho Ishikawa spent 13 years at Eirinji Temple and 6 years at Saifukuji Temple, where he created many gorgeous, colourful wood carvings and sculptures. The art has been well looked after and many of them can still be seen today.

Eirinji Temple was constructed approximately 500 years ago. Uncho Ishikawa supposedly went there with the promise of getting ‘good sake and chisels for life’. It sounds like quite an unusual agreement for a temple.

Uncho Ishikawa spent 13 years at Eirinji Temple creating several beautiful wood carvings and sculptures. The transoms, the beams above the doors, have been beautifully decorated by his paintings and carvings.

As you enter the temple, there are three dragons placed in front of the main image of Buddha. Dragons have been worshipped in Japan as Gods of water since ancient times. They are seen as guardians, and that may very well be the reason Uncho Ishikawa created the image of the dragons.

Tennyo, The Heavenly Maiden is a masterpiece created by Uncho Ishikawa. The Tennyo is known to extend life, scatter enemies, give wealth and spread Buddhism. This is why the Tennyo can be seen in many temples. The artwork at Eirinji Temple is created using bright colours that still shine bright today. 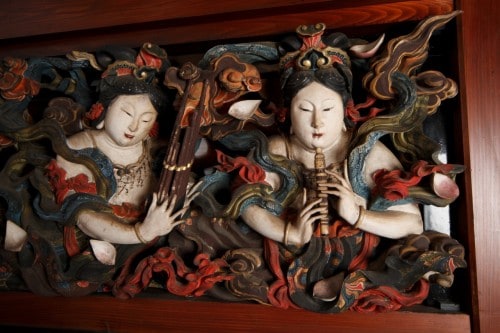 Tennyo, Heavenly Maiden, one of the masterpieces

The faces of Uncho Ishikawa’s creations show different expressions depending on the angle from which you view them. There is an old tale that the Tennyo found at Eirinji Temple was based off a woman that Uncho Ishikawa was in love with.

How to get there: City bus from Koide station to Tado stop. From Tado it is a 15-minute walk.

Note: Please refrain from taking any pictures and keep quite inside the temple.

Saifukuji Temple is a Soto Zen Buddhist temple and officially opened in 1534. The temple is the most famous for the many sculptures and wood carvings made by Uncho Ishikawa and Shoshu Kanō. These two men were master craftsmen in their time during the Edo-period. 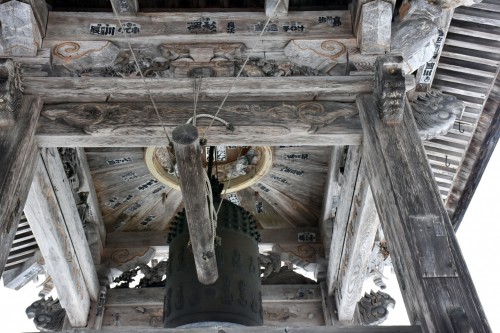 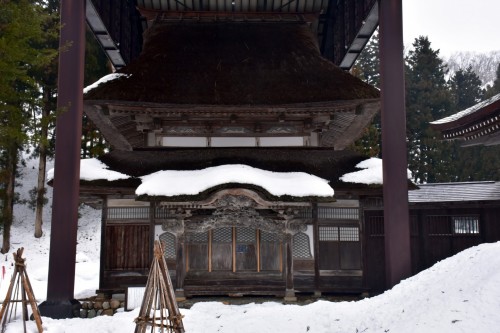 One of the beautiful buildings of Saifukuji Temple

Saifukuji Temple is an impressive sight with vibrant colours shining through the artwork in the main hall of the temple. Uncho Ishikawa spent a full 6 years completing all of the sculptures at Saifukuji.

The masterpiece – The story of Dogen-Zenji

The main hall of Saifukuji temple was designed by a priest in 1857. The space was used for performing memorial rites. The main feature of the main hall is the marvelous ceiling that is covered in wood carvings by Uncho Ishikawa. The ceiling depicts the story of when Dogen-Zenji encountered an aggressive tiger while walking in China.

According to the story, his walking stick changed into a dragon to guard him and keep him safe. There are also an additional seven animals in the huge ceiling piece. Uncho Ishikawa was a man with a certain amount of humour, and that is portrayed in his artwork.

The ceiling carvings are the main masterpiece left behind at this temple. But there are also several other sculptures and artworks covering the walls, sliding doors and beams at this temple.

Note: Please refrain from taking any pictures and keep quite inside the temple.