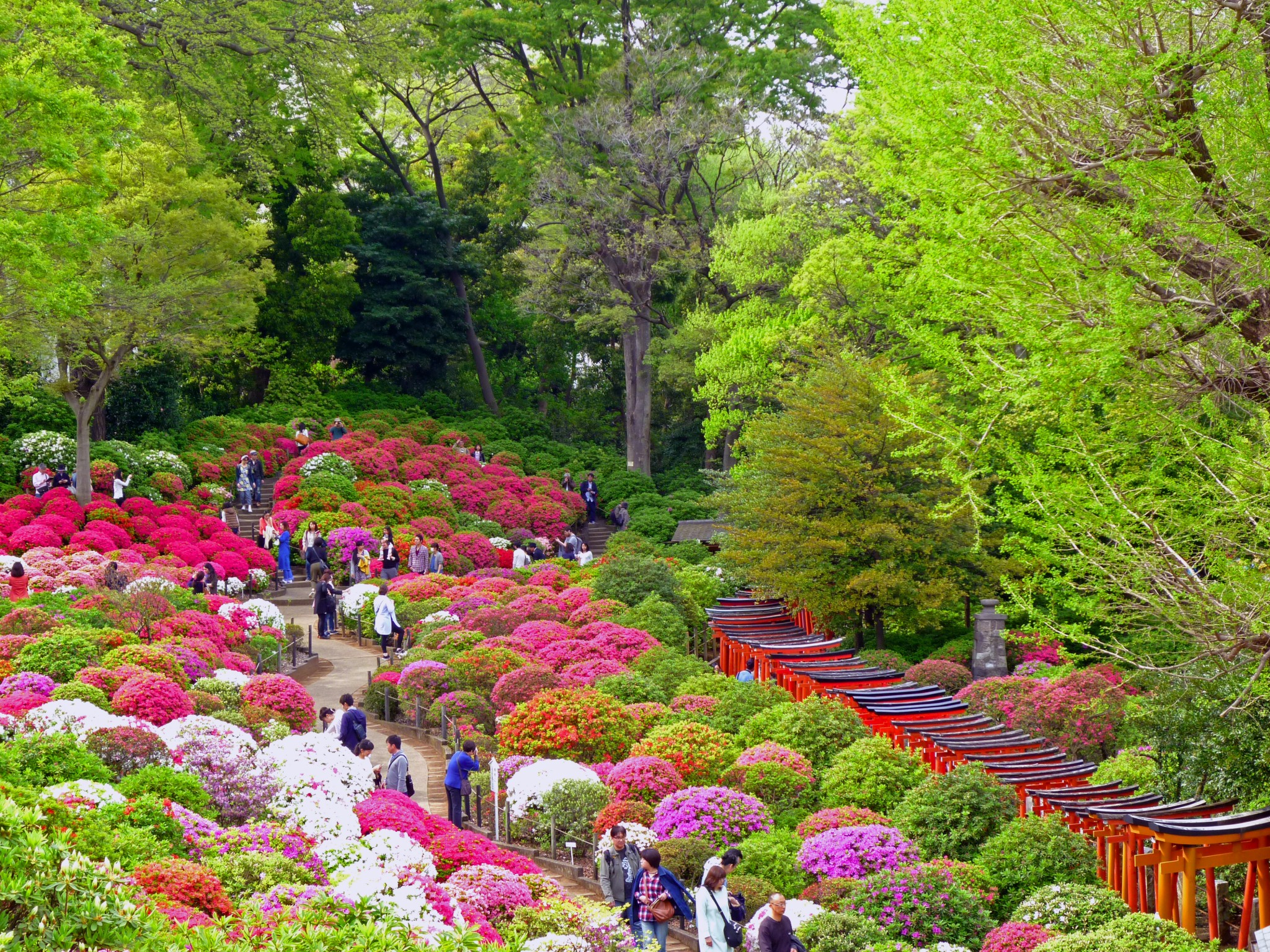 Over 100 species of azalea plants at Nezu Shrine

Shrine, garden or forest, there are many places in Japan where various kinds of flowers can be viewed at different times throughout the year. One of them is Nezu Shrine, which is a spot for enjoying azalea (tsutsuji). Although Nezu Shrine is a historic shrine in Tokyo, for eleven months of the year, it doesn’t draw much public attention. However, when spring comes around and its remarkable azaleas begin blooming throughout its designated garden, Nezu Shrine becomes a very popular tourist attraction. Every spring, both locals and visitors come to enjoy the beauty surrounding Nezu Shrine and its terraced garden – most importantly, the breathtaking expanse of its brilliant azaleas.

The azalea garden at Nezu Shrine is said to be 300 years old. The garden contains around 6.600 square meters and features approximately 3.000 azalea plants of 100 species, including rare breeds. Bunkyo City, the neighborhood where Nezu Shrine is located, uses the azalea as its official flower.

In Nezu Shrine, you can see arcades of torii gates beside the azalea garden as well. They look like those at Kyoto’s Fushimi Inari Taisha shrine, only smaller and narrower.

When is the Azalea Season at Nezu Shrine?

This year, the festival officially starts Saturday, April 9, 2016, and ends Thursday, May 5, 2016. The azaleas usually reach full bloom during late April, but there are azaleas blooming later or earlier anyway. Hence, there will be always something blooming during the festival. Visitors also have to be aware that from April 29 until May 5 – which coincides in part with the festival – is the period of Golden Week, during which most Japanese people get a week off. For sure, Nezu Shrine will be extremely crowded during those days. If you want to relax while enjoying the blooming garden, you had better avoid visiting during the Golden Week period.

How To Get to Nezu Shrine

Take the Tokyo Metro Chiyoda Line, get off at Nezu Station, and leave the station through the exit number 1. You can also take the Namboku Line, getting off at Todai-mae Station. It takes around 9 to 10 minutes by foot from either station. There is no need to worry about getting lost. Right after leaving the station, you will see signs pointing toward Nezu Shrine along the way.