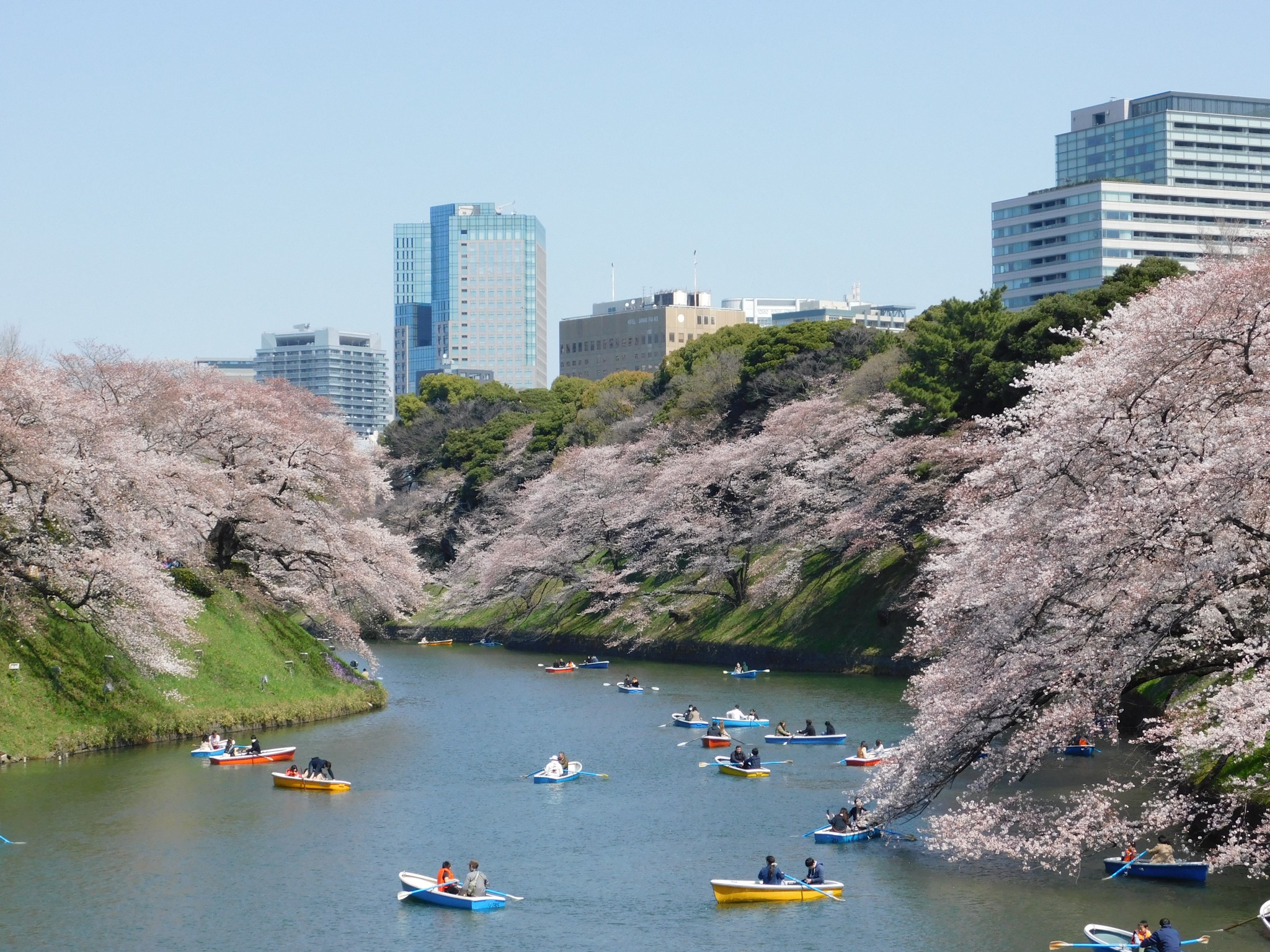 The time has come: The cherry blossoms in Tokyo have reached their peak!
But where can you best enjoy the white and pink splendor? That’s the same question I often ask myself so I went on an exploratory tour through Tokyo in search of the most beautiful Sakura spots.

You probably wonder why Hanami (literally “flower-watching”) season in Japan is so special? The cherry blossom (sakura in Japanese) is probably one of the most important symbols in Japanese culture. It stands for beauty and departure, marking the beginning of spring but also acting as a symbol of life’s transience, one of the four teachings of Buddhism.

It’s no surprise then that the cherry blossom season is marked in the Japanese calendar. Weeks in advance, predictions are made about when to expect the first cherry blossoms, with the exact dates of the season varying by a few days from year to year.

The Beginning of Cherry Blossom Season – Hanami at Yasukuni Shrine

For me, that reason alone was enough to get me to visit this place. As I made my way to Yasukuni Shrine, driving along Uchibori Street, which is lined with cherry blossom trees on both sides, I couldn’t help stopping to photograph the white and pink flowers. Regarding the fascination with cherry blossoms, be forewarned, the cherry blossom fever will catch up with you quickly!

Arriving at the Yasukuni Shrine, I put my bike in the designated parking lot and went with the crowds. There were more than a few people on their way to the same destination.

And despite the hustle and bustle around me, I quickly forgot the other people as I discovered the white flowers on the shrine grounds and paused for a moment. It’s amazing the effect cherry blossoms can have on a whole nation. Now I can understand; it is a breathtaking sight. On the grounds, I also discovered the cherry blossom trees used by the Japan Meteorological Agency to mark the beginning of the cherry blossom season. A truly perfect start for my Hanami tour of Tokyo!

Cherry Blossoms around the Imperial Palace

It’s less than five minutes by bike from Yasukuni Shrine to the grounds of the Imperial Palace. Again I went with the crowds.

If you’re here, you should take the chance to walk around the entire grounds of the Imperial Palace, as you will definitely not be disappointed. The cherry blossom trees in front of the National Theater fascinated me especially. Unlike many others, this area was not too crowded, and you can use the opportunity to take some nice photos with the cherry blossoms in the background.

A Boat Tour in Chidorigafuchi Park

A highlight of the tour awaits you in the Chidorigafuchi Park, where you cannot only walk along the 700-meter-long promenade and admire the flowers. Here you can also look at the cherry blossoms from the water! A boat trip on the imperial moat, lined with cherry blossom trees on both sides, is a simple but special experience.

A 30-minute boat tour costs you 800 yen. But during the peak of cherry blossom you can count on waiting times of up to 30 or 40 minutes, as these tours are very popular among locals and tourists.

Hibiya Park – An Oasis in the Tokyo Metropolis

If you ask me about my favorite spot for Hanami, my response would be – without much thinking – Hibiya Park. It is not only in the heart of Tokyo, next to the Imperial Palace, but it is also the scene of many seasonal events.

Unlike other parks, you will not find the multitude of cherry blossom trees here, but you can enjoy a moment of tranquility at the Shinkei Pond, at the back of the park, while the sakura festival takes place around the Hibiya Park Fontaine. Since I visited Hibiya Park in the morning, I was almost alone there. I could look at the cherry blossoms in peace, but I also took some snapshots of the wildlife in the park.

Hanami at Ueno Park – A Trip for the Whole Family

Ueno Park is one of the busiest places for Hanami in Tokyo but it offers the perfect getaway for the whole family during the week. Here you cannot only admire a variety of sakura trees, but if you are traveling with children, you can also make a detour to the Ueno Zoo. You won’t regret it!
A small note: try to visit the zoo during the week, otherwise you should expect long waiting times at the box office.

Another reason Ueno Park is so special is the Shinobazu Pond, in the middle of which is the Shinobazunoike Bentendo Temple. My tour led me to various food stalls around the pond that offered everything from Yakisoba to Okonomiyaki, inviting me to take a quick lunch break by the water.

With a bit of luck, you will not only be able to enjoy sakura and wildlife, but you may also find one or two artists drawing the sakura flowers on the water’s edge.

My next stop will take me to Kiba Park, located in the district of Koto-ku. This park is one of the lesser-known hanami spots, which makes it so special at the same time.

Like the locals, my friends and I manage to secure one of the much sought-after picnic spots under the cherry blossom trees, where we hold our little hanami party. Surrounded by families, without the crowds of people found in Ueno Park, we could spend the rest of the peaceful afternoon here before heading home.

On your way back, you should take the chance to take a short detour along the Oyokogawa River, as you should not miss the view of the flowering cherry trees!

The day is slowly coming to an end and I decide to end my Sakura tour through Tokyo in a very special place. The Roppongi Ark Hills are my last destination for this day and as soon as I step out of Roppongi-Itchome station, I am already greeted by the white flowers, which cover the street like a canopy.

Actually, I have prepared for a large crowd at this place, but I am pleasantly surprised. Apart from a few couples who enjoy the romantic atmosphere here, I am almost alone and enjoy the view of the sea of cherry blossoms. The combination of the white sakura flowers in the midst of many skyscrapers invites you to dream and will transport you into another world that you should not miss!