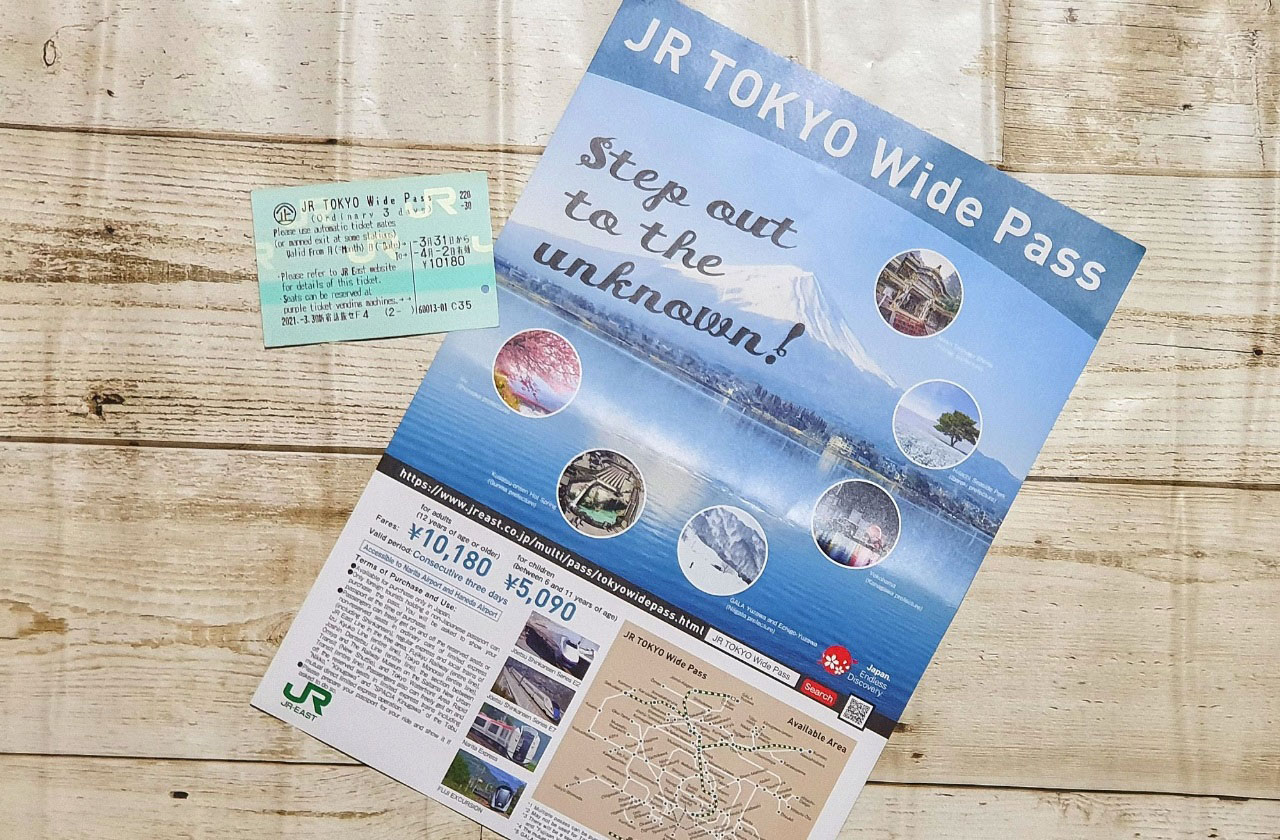 When you travel a lot by train in Japan, it can get quite expensive, especially if you want to use special express trains. However, there are some train passes that can save you a lot of money. One of them is the JR Tokyo Wide Pass, which allows you to discover the Kanto region. We used this pass during my spring break and I would like to introduce the pass to you and show you some of the destinations you can visit with it.

What is Included in the JR Tokyo Wide Pass?

The JR Tokyo Wide Pass has been available since November 19, 2015. At the time, it replaced and expanded the JR Kanto Area Pass, which was launched in January 2012. Unlike many other Japan Railway Company train passes, this one is valid for all foreign residents, not just for foreign tourists. That means you can also use this passport as a foreigner living in Japan, regardless of your visa.

The pass is valid for three consecutive days. It costs 10,180 yen which isn’t a lot for three days of travelling. Passes for children aged 6 to 11 years cost 5,090 yen. Children under 6 years do not need a pass.

What Area Does the Pass Cover?

As the name suggests, you can use the JR Tokyo Wide Pass in a large area around Japan’s capital. This includes the Japan Railway lines in Tokyo, Kanagawa, Chiba, and Ibaraki prefectures, as well as parts of Yamanashi, Shizuoka, Nagano, Tochigi, and Gunma prefectures. You can use the trains as often as you want, as there are no limits to the number of rides.

In addition to the regional JR EAST trains, the pass can also be used for the Tokyo Monorail, the Izu-Kyuko Line, the Fujikyu Railway, the Rinkai Line, the Joshin Dentetsu Line, and some other lines. You can use the Shinkansen express trains, which take you to Karuizawa, Takasaki, GALA Yuzawa, and Utsunomiya, among others (pay attention that the Tokaido Shinkansen to Yokohama / Shizuoka cannot be used with this pass). The Narita Express and express trains to Nikko / Kinugawa Onsen, which are used cooperatively by the JR East and Tobu Railway, are also covered by the JR Tokyo Wide Pass.

For a better understanding, here is an overview map:

The JR Tokyo Wide Pass is especially worthwhile if you want to cover longer distances or use special trains. The 10,180 yen pass averages around 3,400 yen per day. If you are only in downtown Tokyo or want to go to Yokohama, it is not really worth it, as, for example, a single ride from Shibuya to Yokohama Station costs just 400 yen.

Trips out of the metropolis, for example from Tokyo to Izukyu-Shimoda, Takasaki, Karuizawa, Utsunomiya, or to Kawaguchiko, are even better, especially when using special express trains. Here the costs for a single trip are already between 4,000 yen to 6,000 yen. If you make a day trip out of it, you save even more!

Where Can I Buy the JR Tokyo Wide Pass?

Now probably the question comes up: Where can I buy the JR Tokyo Wide Pass? There are two ways of doing this.

On the one hand, you can book the pass online via the JR East website before you travel to Japan. You can online then pick up the pass after your arrival at one of the Travel Service Centers in the region. Show your passport on-site (only the original document is accepted, no copies) and you can then activate the pass by selecting the period of validity.

Alternatively, you can buy the JR Tokyo Wide Pass directly from one of the Travel Service Centers in Japan. Here, too, you must present your passport to purchase the pass.

The pass is a green paper ticket that can be used directly at the JR ticket gates. Insert the pass in the ticket slot to pass the barriers and be sure to pick it up on the other side. It is not necessary to show it to the staff at the train station and you can pass the barriers as often as you want.

On those especially on long journeys, consider getting a seat reservation, which is also included in the JR Tokyo Wide Pass. Some trains require you to reserve a seat in advance to be able to ride it. You can either reserve it online via the same website where you can buy the pass or directly on-site at the train station. With your pass, you can reserve a seat directly at the ticket machines or you can ask for help from the staff at the ticket counter (みどりの窓口, Midori no madoguchi) or at the Travel Center.

Note that you need a seat reservation for some express trains and cannot use it without a reservation. If you want to use the green car on a train, there is an extra charge.

The JR Tokyo Wide Pass is valid for three days, meaning you’ll want to plan accordingly to get to all the travel destinations available in this area.

East of Tokyo Prefecture, you can explore Chiba Prefecture with the impressive temple complex in Narita and the beaches of the Boso Peninsula. Ibaraki Prefecture offers the famous Hitachi Seaside Park as well as the city of Mito with the Kairakuen, one of the three most beautiful gardens in Japan. Here you should pay particular attention to the appropriate season if you want to see the special blossoms and flower fields.

To the west, you can find Kawaguchiko with a wonderful view of Mount Fuji on a clear day, but cities like Odawara and Kofu are also worth a visit. The JR Tokyo Wide Pass also takes you south to the Izu Peninsula to destinations like Atami, Ito Onsen, and Shimoda.

There is a lot to discover, especially north of Tokyo. You can plan day trips to Nikko and Kinugawa Onsen, make a stop in Utsunomiya or travel to Takasaki and Karuizawa. Especially in winter, the JR Tokyo Wide Pass is ideal for going to the GALA Yuzawa ski resort.

Are you excited about travelling in the Kanto area now? Then have fun exploring the region around Tokyo on your JR Tokyo Wide Pass for your next trip to Japan!