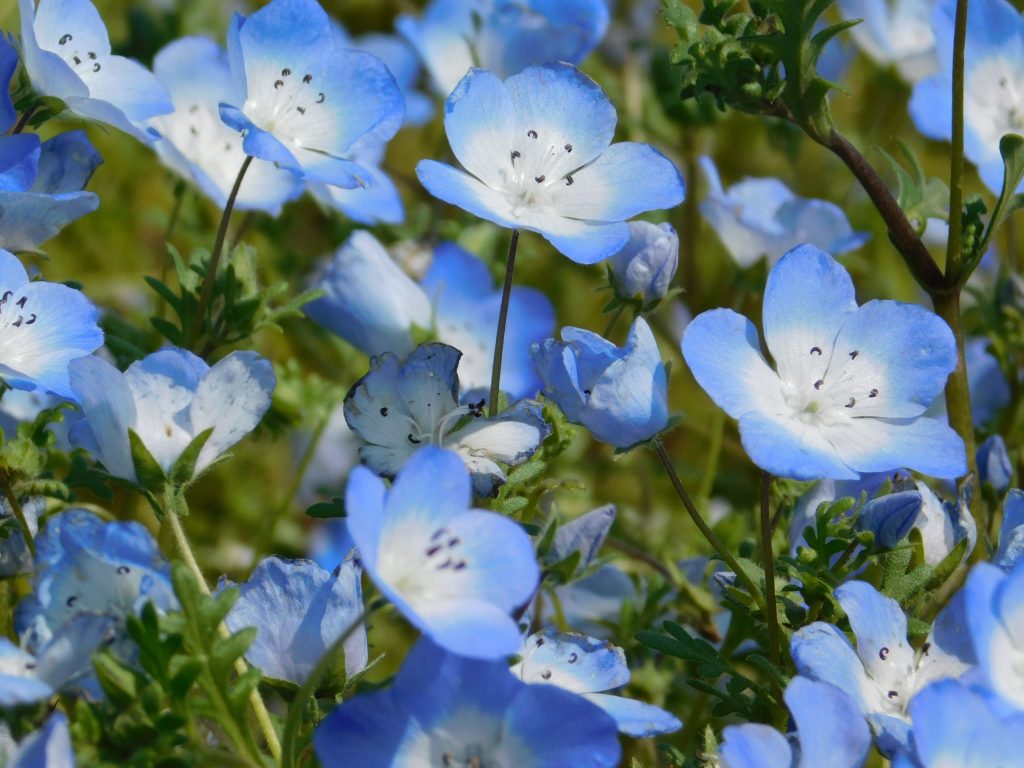 What would be Japan without its flowers? The list of flower-centered attractions is long: pink sakura blossoms, orchards of peach blossoms in Yamanashi, deep pink flame flowers at the Shibazakura Festival in Chichibu, and Nemophila at the Hitachi Seaside Park. And these are but a few of the fascinating flower attractions that Japan has to offer.

This seasonal event is enough for us to make our way to Ibaraki Prefecture to see this unique flower spectacle at Hitachi Seaside Park with our own eyes.

From Tokyo to the Hitachi Seaside Park

We started our three-hour journey to Ibaraki Prefecture from JR Tokyo Station, from where the local JR Joba line took us directly to JR Katsuta Station.

From there, the Hitachinaka Seaside Railway continues straight to the Ajigaura train station, where a free shuttle bus was already waiting for taking visitors to the Hitachi Seaside Park.

Because the train ride on the Hitachinaka Seaside Railway cannot be paid by Pasmo or Suica IC cards, we had to buy a physical ticket before changing trains. But this ticket included the entrance fee to the park, so we saved a few yen.

Nemophila: A Blue Ocean of Flowers

The Hitachi Seaside Park is known for its numerous seasonal flower attractions, which is why it makes sense to visit it in different seasons. Nemophila blooms from mid-April to early May, when around 4.5 million flowers transform a large part of the park into a sky-blue sea of flowers.

On our way to the hills covered in Nemophila, other brightly-colored flowers attracted our attention — bright orange poppies were shining and invited us to pause to enjoy them.

They were the exact opposite of the Nemophila, which greeted us only a few hundred meters away, covering the hills in a soft blue hue.

Since it was already the beginning of May, we unfortunately missed the peak bloom. Yet the sight of the hills colored by the Nemophila in sky blue was simply fascinating.

Wherever we looked, the sea of small, delicate flowers spread out in front of us, occasionally with a few small surprises. The majority of flowers are the Nemophila menziesii, the most well-known representation of its genus with a light blue color. But among them, we spotted Nemophila maculata with their typical identification – white petals with deep dark blue colored tips.

Nemophila Ice Cream and other Attractions

Together with the other visitors, who all seemed to have come to enjoy the Nemophila, we strolled through the sea of flowers, but paused often to simply enjoy the view.

Later, we also purchased Nemophila omiyage in one of the numerous souvenir shops that are spread around the park. One of them was a cute Nemophila ice cream, a delicious snack on this hot day.

Amusement Park and Event Area at the Hitachi Seaside Park

The Hitachi Seaside Park is not only a destination for flower lovers, it was also the setting for a major music festival until 2019 – ROCK in Japan.

The information about “ROCK in Japan” is displayed everywhere in the park except in the Pleasure Garden, which is a kind of amusement park with some attractions for the little ones. But children are not the only ones who can enjoy this area. We were also excited about many of the attractions, as well as the bicycle rental shop. From 9:30 a.m. to half an hour before the park closes, it is possible to rent a bicycle (3 hours/ 400 Yen) and explore the 11-kilometer bicycle path that runs through the entire park.

Next time we will surely try it out, discovering the park by bicycle!

Ending the Day at Ajigaura Beach

The day was coming to an end and we still had a 3-hour train ride back to Tokyo. But instead of taking the free shuttle bus that would take us back to JR Ajigaura Station, we decided to walk back, which takes around 20 minutes nonstop.

We were walking on a path right next to the Pacific Ocean, an opportunity we didn’t want to miss. So, we made a short detour to the beach. With sand between our toes and the sound of the sea in the background, we enjoyed the last warm rays of the sun while groups of young people around us got their grills out of their cars and set up chairs to enjoy the evening by the sea.

We would have loved to do the same, but since we didn’t want to miss our last train back to Tokyo, we made our way back to the train station.

We quickly found out that only one day is not enough to enjoy the Hitachi area. So, our advice to you: take your time!

It is not only Hitachi Seaside Park and the beach of Ajigaura that you can enjoy. In addition, there are small shrines that radiate a cozy atmosphere, you can end the day relaxing at the Ajigaura Nozomi Onsen.

At the end of the day, one thing was clear to us: we will definitely visit the Nemophila again during their peak season and spending more time in the park and surrounding area. We want to enjoy the sky-blue flowers once again.