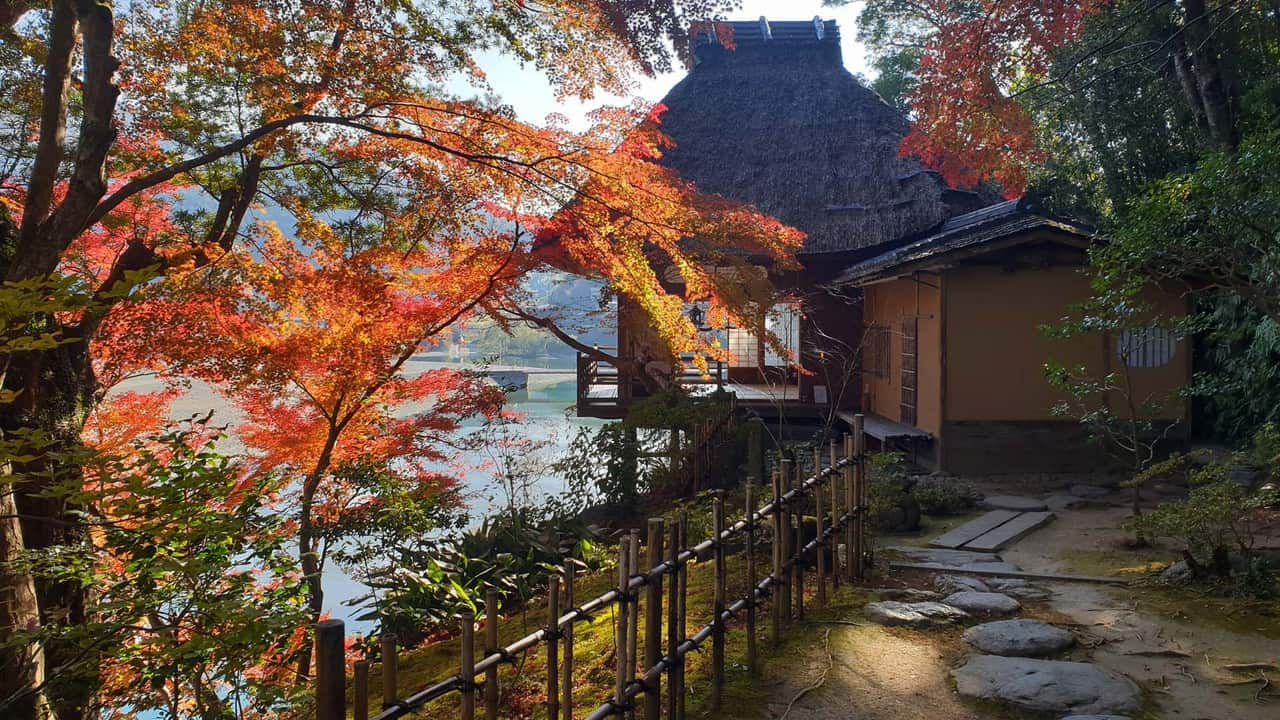 Japan’s smallest main island, Shikoku, is usually not one of the main destinations for international tourists visiting Japan. Many follow the golden route with Tokyo – Fuji – Kyoto – Osaka – Hiroshima. However, a visit to the four prefectures on Shikoku is very worthwhile, not just to escape the crowds of tourists. We visited Ehime Prefecture in the autumn of 2020 and took a day trip to Ozu City (大洲市, Ōzu-shi) from its capital Matsuyama which was a highlight of the trip, especially because of the beautiful autumn colors. Here are some of the best things to see and do in Ozu City.

The Hijikawa River flows through Ozu city and provides a beautiful backdrop for one of the city’s main attractions: Ozu Castle (大洲城, Ōzujō).

Ozu Castle (大洲城) is located on a hill by the river and was originally built in 1331. The castle is also called Jizogadake (地蔵ヶ嶽城). Like many Japanese castles, it has been destroyed several times during history, be it by fire, natural disasters, or human hands. After the Meiji Restoration, the castle remained neglected until the decision to demolish the main building was made in 1888. Only four watchtowers (櫓, yagura) remained intact, which were declared an important cultural asset of Japan in 1957.

The plans for the reconstruction of the castle started in 1996. For this purpose, historical records of the old construction methods and traditional techniques were used using wood without nails. So, the new building was kept very close to the original structure. The work was completed in 2004.

Inside the castle, there are steep stairs and an exhibition on the history and reconstruction work of the castle, with models, figures, drawings, and photos. The admission fee is 550 yen for adults, and the castle is open daily from 9:00 a.m. to 5:00 p.m. (the last entry is at 4:30 p.m.). You have a wonderful view of the city, the river, and the mountains in the surrounding area from the top floor.

If you want to experience the castle even more, there is a unique opportunity to make an overnight stay at Ozu Castle. Sleeping with futons on the traditional wooden floors where the samurai once spent their nights — surely you would like to tell your family and friends about that after your trip.

About a 15-minute walk from the castle is Garyu Sanso (臥龍山荘), a mountain villa that you shouldn’t miss during your visit to Ozu. The villa, built in 1907, consists of a large garden with several buildings. Numerous architects were consulted for the planning, and even designs of the imperial villas in Kyoto were used as templates. There are numerous details to discover when taking a look around.

From the elegant main house, you can enjoy the view over the moss-covered garden. The garden is very beautiful, especially in autumn, with the red and yellow colors of autumn leaves (紅葉, kouyou). The garden’s end is a building on stilts that overlooks the river. It is said that the moonlight from the river should be reflected in the vaulted ceiling construction.

Three of the buildings were named important national treasures in 2016. These include the garyuin (the traditional main building), the furoan (the tea house on stilts), and the bunko (a warehouse for documents, books, paintings, and other essentials).

What Else To See and Do in Ozu?

Ozu Castle and Garyu Sanso Villa are the most popular tourist destinations in Ozu City. But the small town has even more to offer. A part of the historic city center has been preserved and is reminiscent of samurai residences and merchants’ houses. The canals with clear water are decorated with flowers, and you can sometimes spot Koi fishes swimming around there. With a walk through this area, you can immerse yourself in a mix of the Edo and Meiji periods. Or do you prefer the Showa period (1926-1989)? The city of Ozu has to offer this as well.

The Pokopen Yokocho (ポコペン横丁) area reflects a shopping area from the 1950s / 1960s. You will find old advertisement tin plates on the walls and stalls in the Showa style, where a wide variety of things are sold every Sunday from April to the end of November and every third Sunday from December to March. This includes food but also old toys and antiques. You can also try out old games at some stalls from that time.

This area also includes the Omoide Soko Museum (思ひ出倉庫), a small Showa retro museum filled with all sorts of things from that era. There is a rebuilt garage workshop inside and an entire Showa apartment, and a corner dedicated to Coca-Cola. Admission costs just 200 yen for adults and allows you to travel back to the past century.

Right next to it is the Akarengakan (赤レンガ館), also known as Ozu Redbrick Hall. This has a more western style in its red bricks. It used to be a bank building; however, nowadays, tourists are welcome. In addition to a sales area for regional products such as candles, ceramics, and pictures, there are also exhibitions and a place to relax.

At the end of your visit to Ozu city, you can buy delicious souvenirs with you and for your loved ones. The Ozu Castle Kinako Kusa Dango, a sweet made from mochi, soy flour, and red bean paste, is very popular. The castle is even shown on the packaging. Ehime prefecture is also known for its mandarins, and so you will find endless products with these fruits. The prefecture mascot, Mikyan, also looks like a dog in the shape of a mandarin.

I hope you enjoyed our little tour through the autumnal Ozu. During our trip at the beginning of December, we were able to see numerous beautiful places with autumn leaves and, above all, the temperatures at this time are also very pleasant for traveling.

How to Get to Ozu City

Ozu City is located in the western part of Shikoku in Ehime Prefecture (愛媛県). The best way to get to Ozu from Matsuyama is by express train. It takes about 35 minutes to get to Iyo-Ozu Station and costs 1,500 yen each way (2,460 yen with a seat reservation). You can also use the local trains, but that takes almost three times the travel time.

Iyo-Ozu Train Station is about 1.5 to 2 kilometers away from the city’s main attractions. You can either walk there or take the bus (pay attention to the schedule, as the buses don’t run often). Alternatively, you can borrow a bicycle from the tourist information office in front of the train station and explore the city with it.

A visit to Ehime prefecture and Ozu city is also worthwhile at other times of the year, including spring’s cherry blossom season or summer’s lush green landscape. If you are planning to travel to Ozu at the end of April / beginning of May, you can combine your visit with over 60,000 azaleas that bloom in Tomisuyama Park (冨士山公園). Depending on when you will make your next trip to Japan, plan a detour to Shikoku for its many other unique destinations on offer.