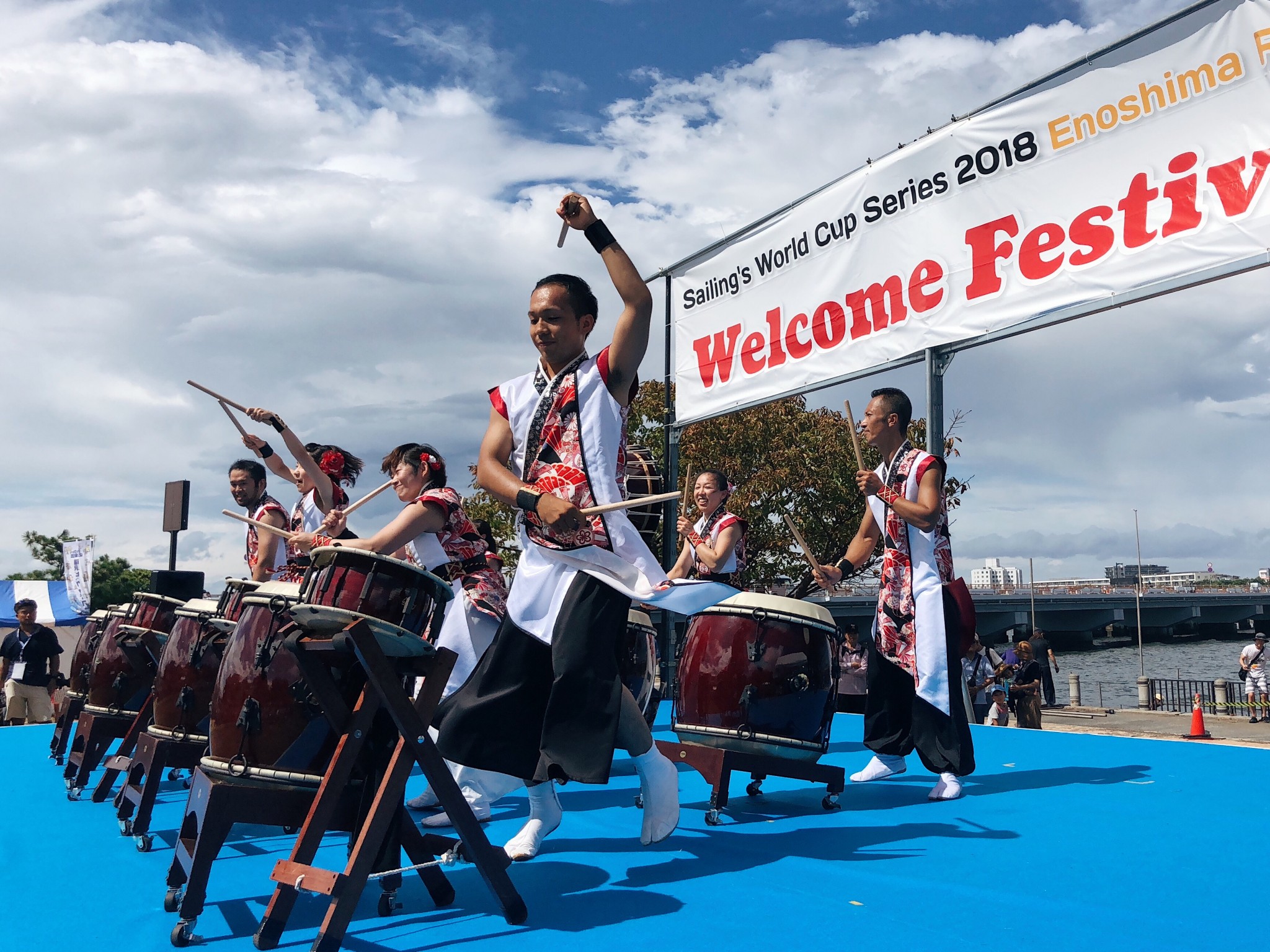 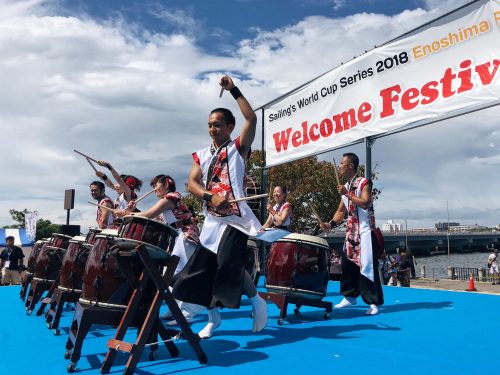 When visiting Tokyo, a gigantic metropolis constantly in flux, you may not believe that you can change sneakers for flip-flops so easily. Just 70 minutes by public transport from Shinjuku, you can easily reach the small Enoshima Island, which is famous for sailing and gliding. To see the island before its upcoming sports festivities (including the Olympic and Paralympic Games Tokyo 2020), I attended the Enoshima Welcome Festival, part of the Sailing World Cup Series.

When a country is honored with hosting a world-class event such as the Sailing World Cup Series, it will often highlight its cultural richness and traditions. That’s exactly what Enoshima decided to do for this ceremony. Japan has an impressive historical and cultural heritage, and amazingly traditions have been passed down over centuries. 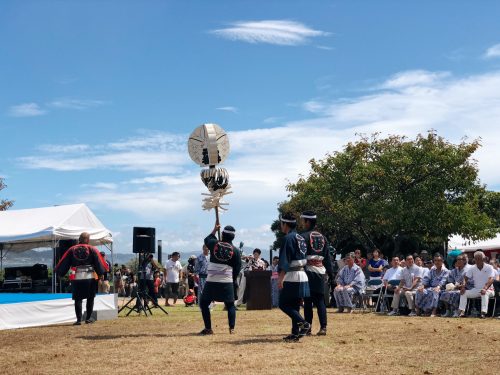 The entrance on the stage of a group interpreting the Kiyari. 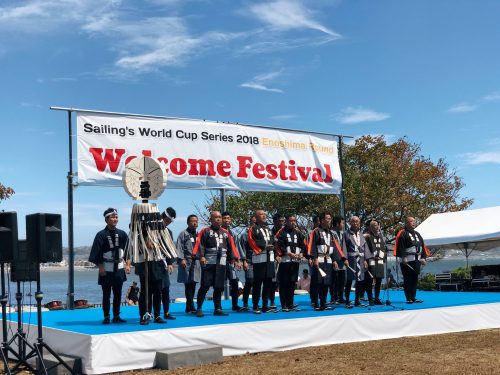 Interpretation of traditional dances and songs

The festival begins with a group of Japanese men interpreting Kiyari, a song with a particular rhythm and tones. Each individual in the group plays the lead one after the other. While Kiyari is rather calm and soothing, the second performance is much more energetic. It is the women’s turn to take the stage for an Ondo dance backed by traditional Japanese music. 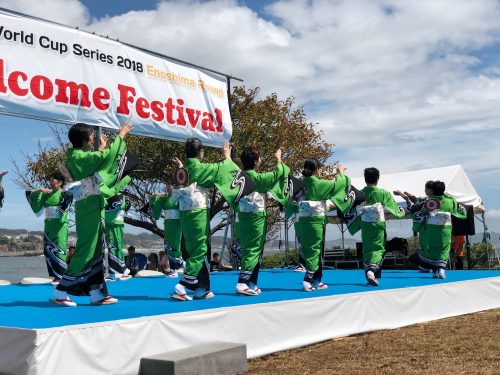 Dancers dressed in kimonos beautifully indulge in a rythmical Ondo from the region, named “Enoshima Yacht Ondo” which was performed for the first time during the Tokyo 1964 Olympics. 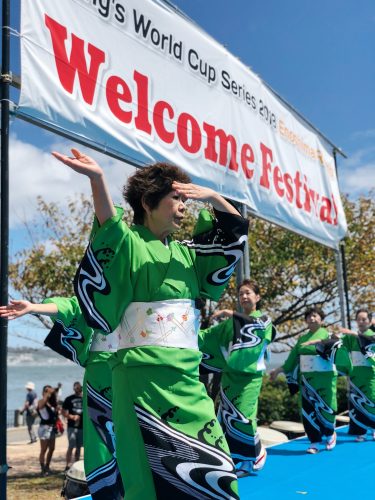 Music that travels through the ages

For visiting tourists, this kind of event is a perfect opportunity to see people of all ages. Even if we do not know much about Japanese culture, the diversity of the show and the quality of the musical interpretations are enough to discover and experience the cultural wealth of this country. 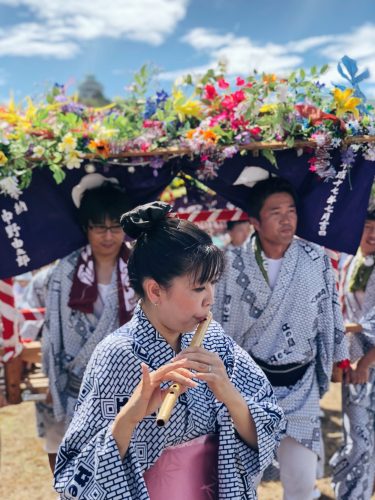 Bayashi, an instrumental music typical during the end of the Edo Period, was the third part of the show. Between martial arts and music, Bayashi offers an interesting performance since children incorporated certain gestures worthy of a karate movie, while girls played the flute. 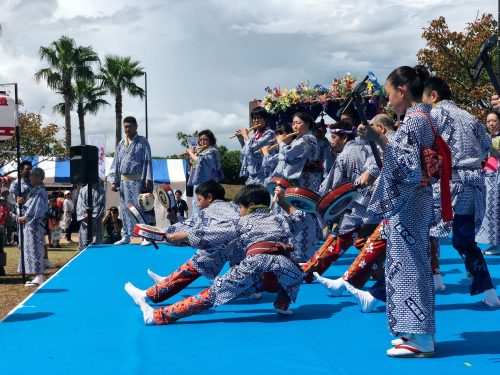 A martial art performance is accompanied by music 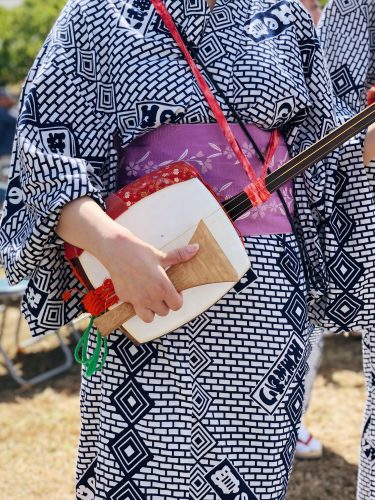 While I loved the bayashi performance, the following performance was my favorite. If you love world music, you will probably be enjoy the rhythmic richness of Wa-Daiko. Musicians perform with a sense of rhythm and incomparable energy, and add some martial gestures to make the show even more vibrant.

A group of dynamic musicians playing the wa-daiko 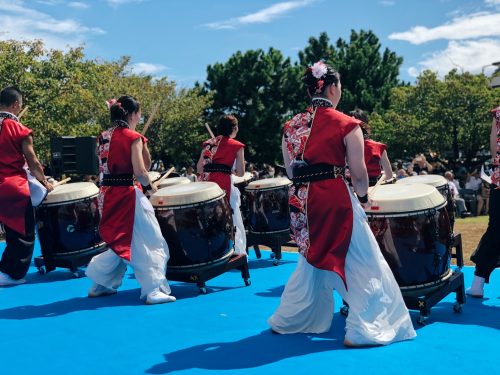 The Wa-Daiko are played in groups on big drums 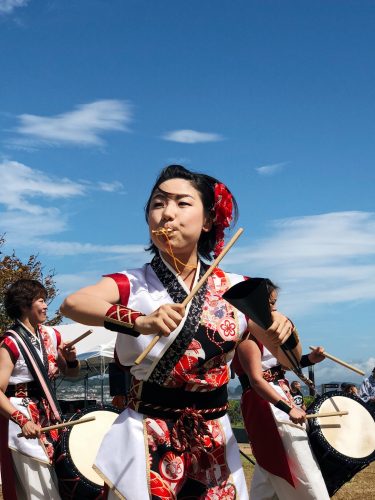 A woman plays the whistle to accompany the percussion section

After an hour and a half musical entertainment, Mikoshi is the last part of the ceremony. Having no idea of the process, I was surprised to see how the ritual unfolded. Indeed, this custom is not really dance or music, but rather a sacred ritual during which a group of people carries a portable shrine on their shoulders to the ocean! 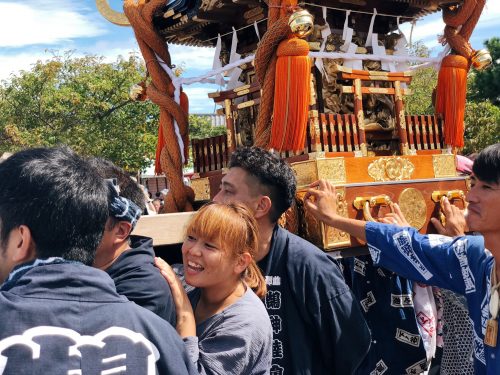 Each individual seems to have a specific role: while the majority support the structure, others sing around the Mikoshi by playing percussions with their wrists. I admit to being overwhelmed by the event, and I observe the Japanese culture in full swing before my eyes with stupefaction and curiosity. 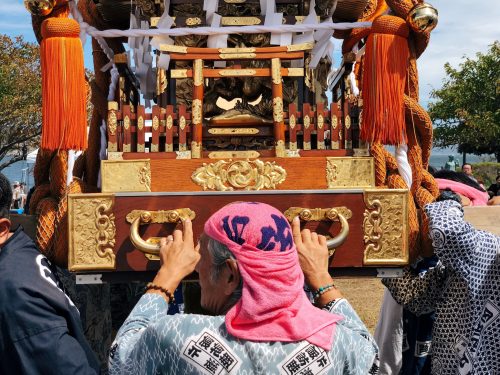 Once at the edge of the water, the group continues to transport the float to the sea, where they will eventually cleanse the sacred spirit before returning to shore. 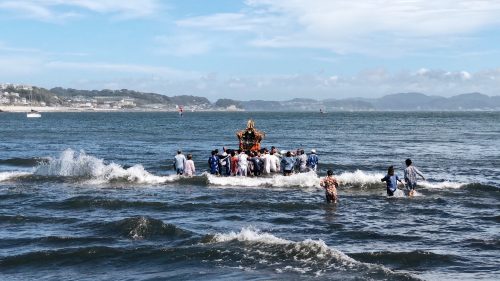 I did not know what to expect from this opening ceremony as I’m not particularly keen on sailing. I was delighted to see that Enoshima decided to focus on culture to kick off the launch of the cup because Japan has perpetuated its traditions throughout history more than any other country. It is an enriching experience for a foreigner to be able to attend this unique and exotic show.