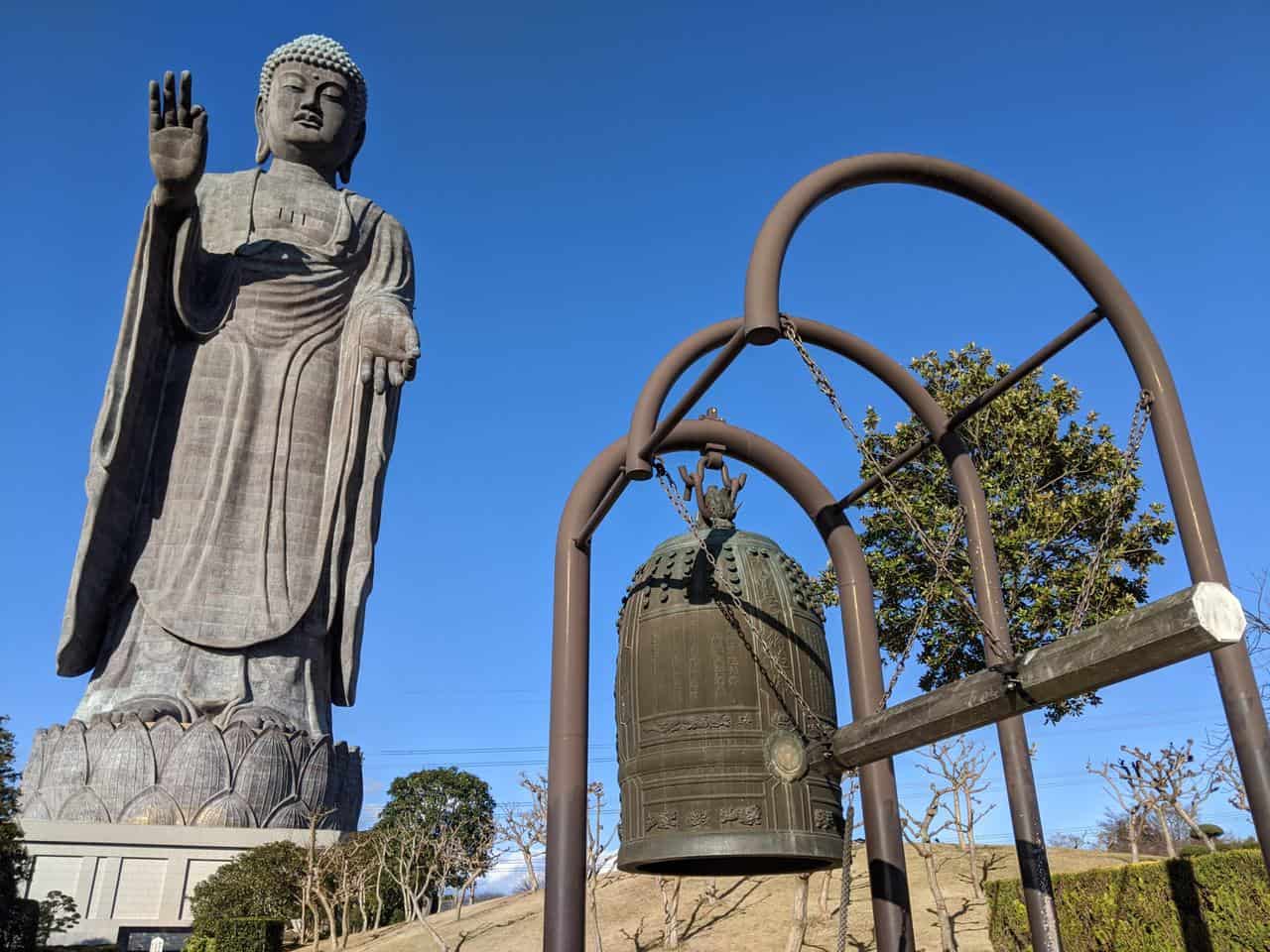 Ibaraki is a lush, green prefecture north of Tokyo full of natural beauty, peaceful towns, and plenty of tradition. It’s a mere train ride from Tokyo and full of enough activities for a day trip, if not an overnight trip. One of Ibaraki’s prime sightseeing sites is Ushiku Daibutsu, one of the three largest Buddha statues in the world. It’s an experience as unique as it memorable, and well worth the few hours that it takes to visit.

Who Built the Giant Buddha of Japan?

My time in Ibaraki began with a drive towards Ushiki Daibutsu 牛久大仏, which stands a staggering 120 meters tall. As I got closer, I caught my first glimpse of it rearing above the treeline like a titan. Only when I got to the parking lot and the grounds surrounding it did I understand how truly massive it was. In fact, Ushiki Daibutsu is the world’s largest bronze Buddha statue. It is encircled by gardens of varying types of flowers that change with the season and beautify the environment.

There are gift shops near the parking lot, and pathways set up to approach the statue and enhance the overall dramatic effect. Even though the statue is cast in bronze, it has yet to take on that recognizable greenish hue because it isn’t old enough, and hasn’t weathered enough of the elements.

A guide and employee of the facility walked me through the grounds and inside the statue itself and provided explanations in Japanese at each step of the way. Thankfully, there are signs in English at various points, and English brochures available as well. That being the case, language feels secondary when brought face-to-face with such a monolithic statue and religious icon. It was built by the Jodo Shinshu temple, whose head temple is in Tokyo though Ibaraki Prefecture is the birthplace of Jodo Shinshu. The temple simply wanted to build the biggest statue possible to gain the attention of the world. The proximity of the statue to Tokyo and Narita airport allows the Giant Buddha to connect to a global audience. In addition to Japanese people, the site attracts numerous international travelers mostly from Buddhist-majority countries like Thailand.

In the Belly of the Buddha

Before entering Ushiki Daibutsu I lit incense for purification, rang a bell to announce my presence, and then circled around to the entrance in the back. After taking my shoes off and stepping inside, all guests enter a chamber that symbolizes the state of mind necessary to be Buddha-like. The chamber turns pitch black for a single, solid minute, and a voice comes up over the speakers talking about the upcoming experience. After the lights turn on and the next room opens, you can see a row of Buddhas on the right-hand side backlit by what my guide called, “the 12 types of light.” Each of the lights shifts colors and patterns, while in the center of the room stands a single, golden Buddha. It’s an impressive way for the tour to begin and helps establish the right frame of mine for appreciating the structure.

The tour passes through four levels of the statue. The second level is an informational room with pictures of the construction of the Giant Buddha, where there is a replica of one of the statue’s toes (the toe alone is as tall as a person). After that, I took an elevator to the top level, where there is an observatory and windows. The view is staggering and really helps to drive home exactly how tall the statue is.

The third floor houses over three thousand small, golden Buddha statues and a number of larger ones. Each statue represents a deceased person, my guide said. People can purchase a statue to use as their headstone in case they can’t afford an entire headstone, or believe they won’t have anyone to care for their headstone after they pass away. The staff of Ushiki Daibutsu take care of the statues and clean them, and so the idea is that a person who passed away will be safely housed inside Buddha forever.

The second floor has an arts and crafts area for practicing writing Buddhist scripture, as well as prayer rooms and a wall where students from local schools can write their wishes for the forthcoming year.

In the end, Ushiku Daibutsu is not only a place of pilgrimage for Buddhists worldwide, but a testament to the power of belief and a towering accomplishment of architecture. If you’ve never been to Ibaraki, it’s definitely something to build into the itinerary, and even if you’re familiar with the prefecture and missed this giant Buddha, make sure to pay a visit the next time.

How to Get to Ushiku Daibutsu

From Ushiku station, get on the train at track 2 of the eastern gate, bound for Ushikudaibutsu/Ushikujoen or Ami Premium Outlet. Get off at Ushikudaibutsu : about 20 – 30 minutes