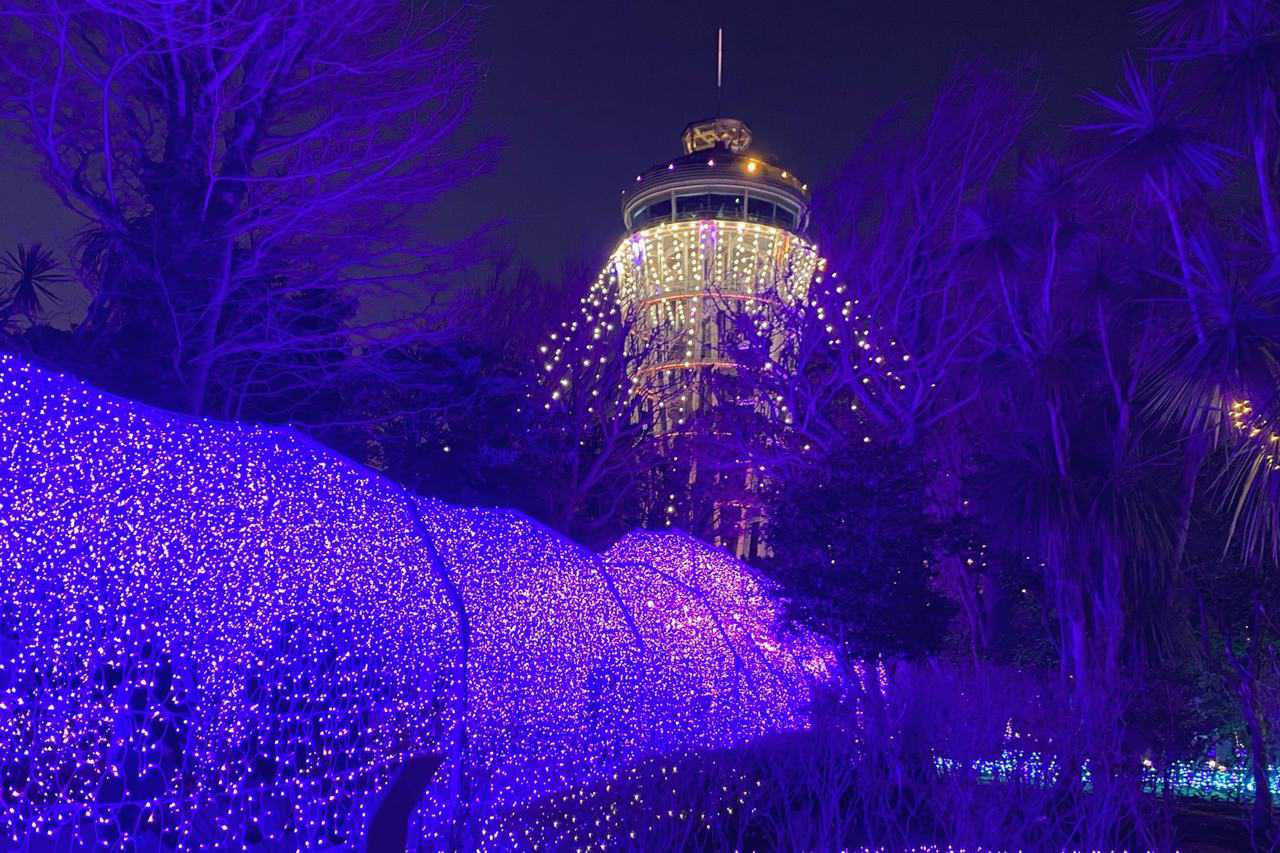 The Jewel of Shonan: Winter Illumination Paradise of Enoshima

After a whole day walking around Enoshima, I was exhausted. The sun was setting and the chill was rising, but I was still waiting for the main attraction of the day, The Jewel Of Shonan, the famous illumination of Enoshima. Many of my friends visited it before and they recommended it to me, but I had never had the chance. Also, it is close to Tokyo, just an hour away! After seeing the pretty illuminations of Tokyo, could I be impressed by another illumination?

The illuminations are located inside the Samuel Cocking Garden, at the very center of the island. I decided to go during the twilight, to be able to see the garden in different lighting. You can get the tickets at the very same entrance or at the entrance of the shrine area.

Just inside the entrance, I was amazed by the tulips garden, full of tulips of all different colors! As I walked around there, although it was winter, it had a special charm. I can’t imagine how it would be during spring or summer!

In this garden, you can find many different events depending on the season, like the Enoshima Flower Festa from mid-April to early June, Enoshima Lantern Festival in August or the festival I was about to see, The Jewel of Shonan.

Inside the facility there are two coffee shops, in case you need to take a rest. I warmed myself up for a while in one of them to recover my strength. Remember that the entrance of the garden is from 9:00am to 8:00pm, and the last admission is at 7:30pm.

Just before the sunset, I went up to the top of the observatory. From there, I could see a 360º view of that breathtaking area: the ocean, the island, and the surrounding cities. On a good day, you can also see Mount Fuji and the Oyama and Tanzawa mountains. The observatory has the same operating hours as the garden, from 9:00am to 8:00pm.

The Jewel of Shonan

At 5:25pm, the famed illumination would be starting in just 5 minutes. Announcements over the loudspeakers were repeating every five minutes that the moment was coming, and I couldn’t be more excited! The Jewel of Shonan is celebrated every night from the end of December until mid-February.

I went out of the coffee shop and I waited in front of the Sea Candle. There I counted down the final 10 seconds with the other visitors. At 5:30pm exactly, all the lights were switched on and I couldn’t believe my eyes, one of the most beautiful illuminations that I have ever seen in my life.

The first place I went to was the illuminated tunnel. It was decorated with purple LED lights with bright objects hanging from the ceiling, which created a very intense feeling. This tunnel had different side exits and through them you could visit the other spaces.

On one of the sides there was a completely illuminated garden, from trees to grass. There were some hanging lamps with more lights, and you could see the illuminated observatory from various places in the garden.

I went to the observatory terrace to take some pictures from high above and appreciate a general panorama from that point of view.

The tulip area was also full of lights and I found yet another flower area that was perfectly located to take pictures of the flowers, the observatory, and the lights.

There were more illuminated parts, such as the right section of the garden with another tunnel. I spent more than an hour taking pictures in awe of the beauty in front of me. Ah! All the scenery was accompanied by music.

When I finished looking around and taking umpteen pictures, it was time to go. It was difficult for me to leave all that beauty, but once I got outside… surprise! There were more lights!! The ones in the garden were more spectacular, of course, but you can view the ones outside without paying and they were also very beautiful.

So I went down from the island by the stairs, observing the other illumination. I couldn’t stop smiling from my entire experience that day, from my day tour in Enoshima to the wonderful illuminations of the evening.

How to Get to The Jewel of Shonan – Enoshima

In this previous article we explained the different trains that you can take to get to Enoshima. Nevertheless, the easiest option from Tokyo is to take the Odakyu Line from Shinjuku Station, or the Tokaido Line from Tokyo Station and change trains at Fujisawa Station to the Odakyu Line.