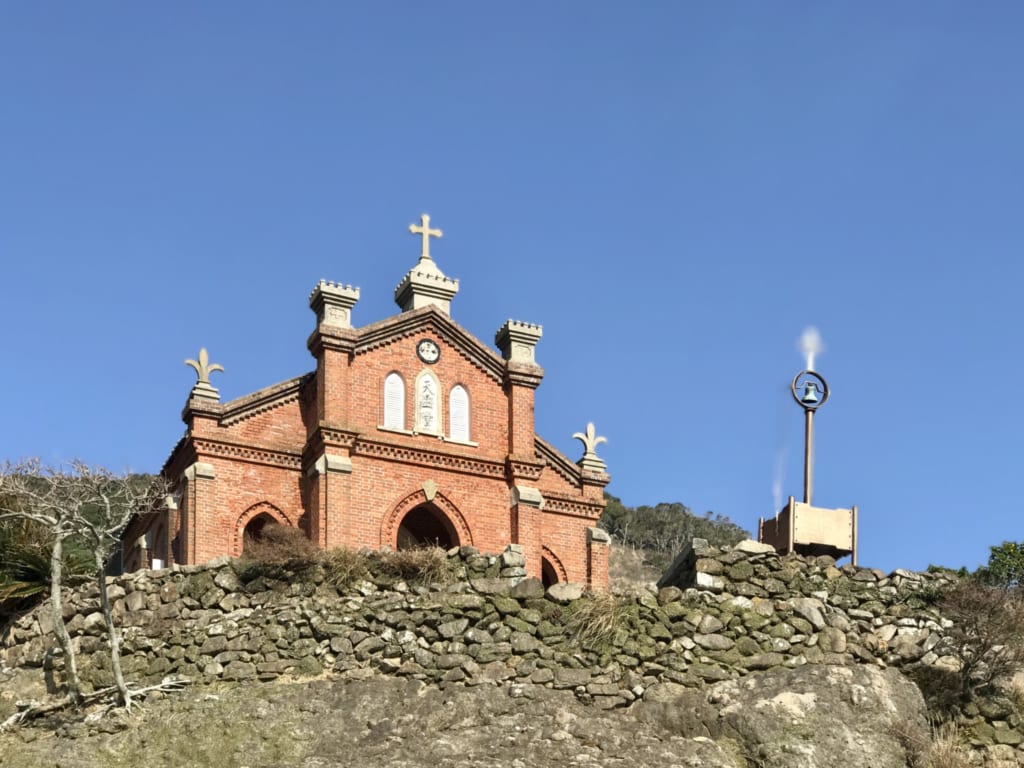 Mysterious, quiet, impressive, even confusing. Landing on Nozaki, an abandoned island with but a single resident, all these adjectives come to mind. And we are surely going from surprise to surprise by going to discover this nearly uninhabited island. Let’s go! Discover this amazing island in the heart of the Gotô Islands, in Saikai National Park, Nagasaki Prefecture.

What if I tell you that in this bubbling Japan which is often summed up in the eyes of visitors to tourist sites as Tokyo, Osaka, Kyoto, Nara, there is an alternative that will satisfy your desires for nature and authenticity? A few hours from Tokyo, after a flight of shorter than 2 hours to Fukuoka, you will comfortably settle in for a 5-hour ferry crossing: welcome to the Gotô archipelago.

30 minutes by boat from the main island of Ojika, Nozaki invites you to experience a real moment of tranquility in communion with nature … and also with the company of some curious wild deer. Before setting off to explore this island, let’s take a brief look at the history of this abandoned place that lives by the rhythm of the few visitors that come to the island.

The “Hidden Christians” of Nozakijima

The Gotô archipelago contains many small islands including the island of Ojika and its deserted neighbour, Nozaki. A protected site, Nozaki seems at first unfriendly to visitors. The first sight when you arrive by boat is a volcanic, wooded and mountainous island. A shrine appears in the northern part of the island, but, perched on the other side of this abandoned island, we discover a church. The human presence which once lived here goes back to the 8th century. A community made up of believers in Buddhism and Shinto worshipped at the Okino-Kojima shrine, whose first characteristic is to be difficult to access, as we will see later.

From the early 17th to the 19th century, the Japanese Christians fleeing from persecution came to settle on this small and remote island. These “Hidden Christians”, banished from the rest of Japan, found refuge on Nozaki Island, where they could live their faith in complete confidentiality.

In 1873, the anti-Christian laws in Japan were officially ended. It was the beginning of a new life for the Christians of Nozaki Island who no longer needed to hide and began to build churches. The one that can still be seen today is the church of Nokubi, in the western part of the island. Since 2018, it (and the remains of the surrounding village) has been listed as a UNESCO World Heritage Site, alongside 11 other hidden Christian sites in Nagasaki Prefecture.

There are still traces in the landscape of the daily life of fishing, but also other signs; the inhabitants also built a school. But the economic difficulties that Japan went through after the Second World War didn’t spare this peaceful little island. The inhabitants gradually left Nozaki in search of better days … a community of Funamori, in the south, was emptied of its inhabitants definitively in 1966. In 1971, it was Nokubi’s turn, which ended more than 150 years of continuous Christian presence on the island of Nozaki. Returned to nature, the island is totally abandoned. It’s an amazing feeling when you cover the 7 square kilometers of it.

A Trek to a Timeless Shrine on an Abandoned Island

The local authorities do their best to preserve this unique heritage. Besides, these are heritage places that deserve to be protected. The Okino-Kojima shrine at the north end of the island is one of those sites that deserves conservation and when accessed, offers a double reward.

For that, we grab our walking stick, we put on our best hiking shoes, and we go for an exceptional trek with Victoria, the local guide, in the beautiful sunshine of January.

You really have the feeling of being a Robinson Crusoe crossing a desert island with exceptional flora and fauna in front of you, including a cute deer. We appreciate the company, at a good distance, of these fellow travelers who live in peace on their island. We almost want to apologize for intruding on their peaceful home.

When we realize what awaits us at the top of the ascent, it feels less hard than it seemed before. The shrine appears completely timeless. We can imagine the faith that animated the inhabitants who regularly ascended to access their shrine. Most amazing is the presence of a huge stone in the shape of a torii, Oe-Ishi. No one can say if it’s the work of nature or the hand of man. In the past, atop this stone, traditional dances used to take place. Impressive!  These people have my eternal respect, just like the eternal rest in which this ancestral shrine seems to be suspended in.

My visit to this mysterious island continues with the exploration of the iconic Nokubi Church. Here, we realize that the only school on the island, which closed in 1985, has found a second life. Called “the natural village of Nozaki”, the facility offers the opportunity to spend the night, with all the necessary amenities (shower, kitchen, etc.) and accommodation in common areas (formerly classrooms). A place with incredible charm below the church which overlooks the sea.

The church exudes a mysterious atmosphere, made especially mysterious because no human life is present in the surroundings. The experience is unique. Serenity, emotion, and nature: the perfect combo. It was more than what we expected.

On the way back, the many abandoned houses we passed reinforced this feeling of mystery and will delight all lovers of haikyo or urbex. You can still see what daily life was like with an interesting visit to the renovated house of the last priest of the island.

The Nozaki Visitors Center, which is the only point of entry and exit to the island, has a very welcoming staff with really good tips to explore this abandoned island in the best conditions.

The Center is open from 9 a.m. to 3 p.m., when the boat picks up everyone on the island. Then, we leave Nozaki to its peaceful, timeless life. Reminiscing over this unique and enriching experience, I have a wish… to push the Robinson Crusoe experience a little further by spending a night on the island. I hope so!

How to get to Nozaki island?

Reading this, you might think that it’s difficult to get to this abandoned island, but it’s not. From Tokyo, Osaka, Nagoya or Hokkaido, reaching the island of Nozaki is actually quite simple. The access to the main island of Ojika is by boat (the crossing, only at night, takes 5 hours, but there are places to sleep on the journey) from the Port of Hakata, easily accessible by bus about twenty minutes from Hakata station in Fukuoka. If you arrive by plane from Tokyo, Osaka, Nagoya and Sapporo in Hokkaido, JR Hakata station is two metro stops from Fukuoka Airport.