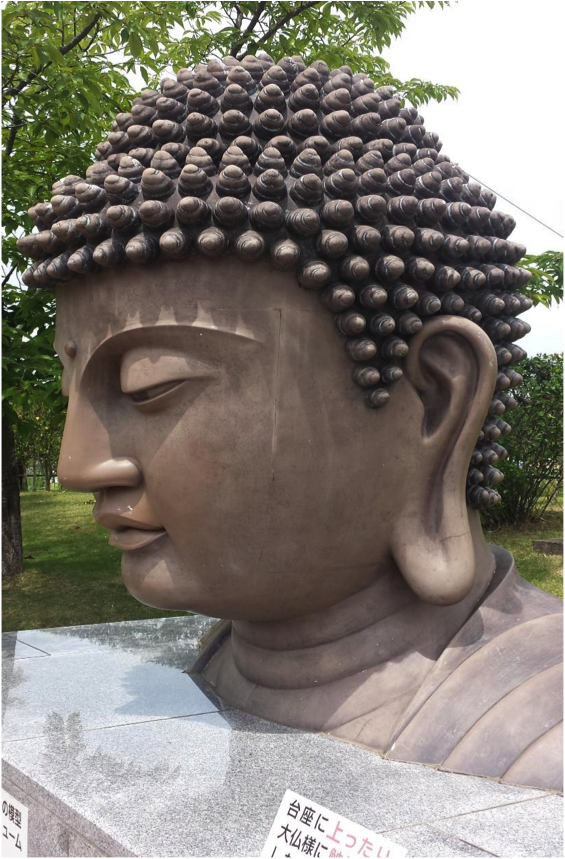 When foreigners head to Japan, many of them are recommended to visit the Great Buddha statues in Kamakura and Nara, and some have the pleasure of being able to see them. Indeed, they are both a sight to behold and are by far the most well-known Great Buddha statues, but that doesn’t make them the largest in Japan. In fact, Ushiku Daibutsu, as it is called, is one of the tallest statues in Japan and is located in Ushiku, Ibaraki, a neighbouring prefecture of Tokyo. It’s a wonder that this magnificently large statue isn’t as popular as it is among foreigners. Although, I have an inkling that the reason for that is because its accessibility isn’t as great as the one in Kamakura. 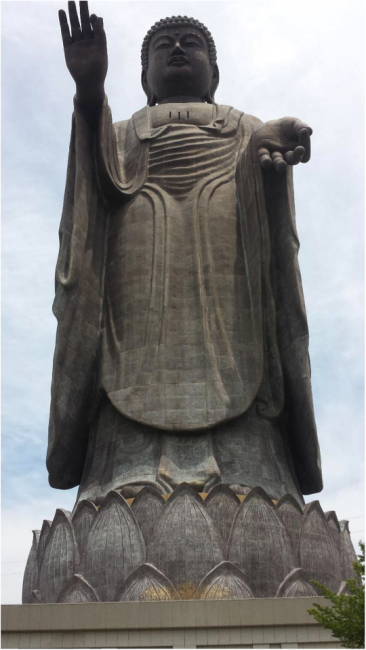 When I say it’s a large statue, I mean it. Ushiku Daibutsu stands at 120m high including the base, that’s 390 feet tall. The Buddha himself is 100m. In fact, it won the Guinness world record for tallest bronze statue from 1993-2002. Before you even reach the garden area, the Great Buddha of Ibaraki can be seen from the bus on the way there, proving just how large it really is. Of course, the full magnitude of how large it is doesn’t quite hit you until you’re standing at the foot of the base, craning your neck to look up at the face of the Great Buddha. It offers some pretty great views from the inside thanks to its towering height. 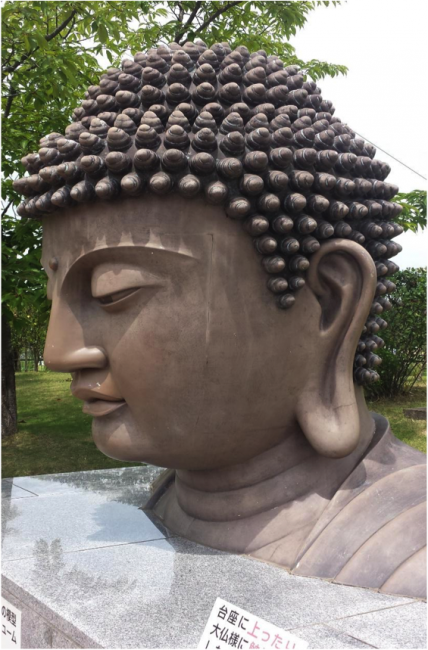 After you enter the gate, you are brought to a large Buddha head that is 1/1000th the size of the head on the Great Buddha statue. It really puts some perspective on just how large this statue is as you’re standing in front of the ‘small’ head. On the path to the entrance, you’ll notice some footsteps painted on a bridge with Japanese characters written in them. For those of you who can’t read Japanese, they read: na – mu – a – mi – da – butsu. The reason for doing this isn’t stated, but my best guess is that it’s a sort of incantation that you say as you pass over into the more spiritual world from the regular world. 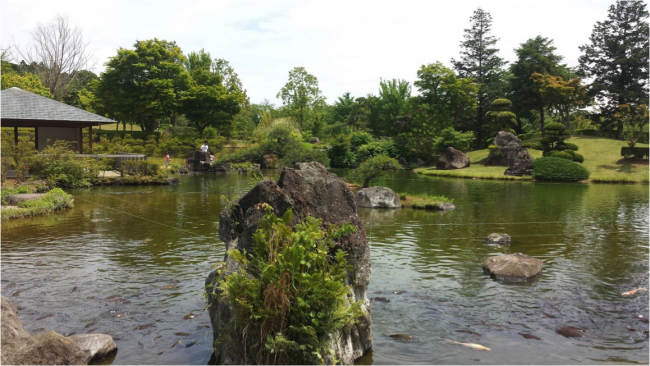 The entrance to the Great Buddha is on the right side of the base, past the flower field, the pond, and after crossing the bridge. After taking off your shoes, you enter an elevator that takes you to the first floor. The first floor is dark with some serene music and lighting, as well as a few statues. Make sure you ask the staff if you can take photos before going in. Some places are rather strict about photos being taken, so it is always best to ask the staff, even if there aren’t ‘no camera’ signs put up. Following this, you are brought up to the floor with all the history of how it was made and when. The one problem with this attraction is that it doesn’t offer much in the way of English translations, but there are a lot of pictures to help get the idea across even if you can’t read it. At the end of this, you are brought to another elevator that takes you up to the observatory. Here there are a number of vantage points where you can get a glimpse of the world beyond the garden. If it’s a clear day, the view is spectacular. Although, even on a rather hazy day it’s still pretty neat. After this you can go down to a room filled with miniature golden Buddha statues. It’s quite impressive to be surrounded by so many golden statues staring down at you from their frames. For me, I’d give the statue 10/10 for offering interest not only on the outside, but on the inside as well. 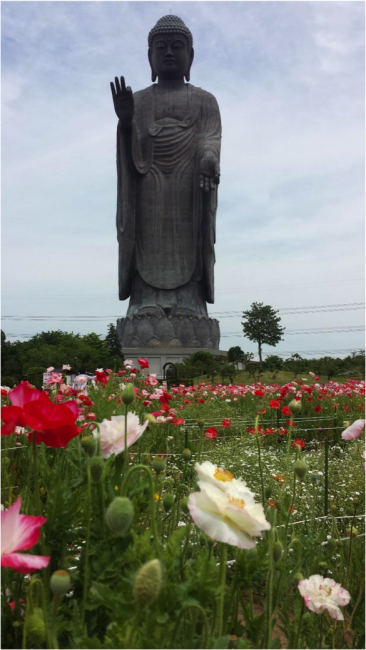 Ushiku Daibutsu has a lot to offer other than the statue itself, granted you go during the right time of the year. The best season to go is in the summer or late spring. Ushiku Daibutsu has a lot of beautiful scenery throughout the garden, including a field of various types of flowers, a delicately designed pond area, and a few other attractions. They even have a petting zoo in the far corner of the area. The best time to view the blooming flowers is in the summer, which offers some pretty opportune photos if you’re photographically inclined. They also offer a service to pick a certain amount of flowers within the field for a price. If you’re traveling with that special someone, it might be a nice side gesture, just saying. Although I recommend summer, I have no doubt that this area would look pretty in any season of the year. Entrance fee is around 700~800 yen depending on the season.

The road getting there certainly isn’t the easiest one nor the fastest, especially if you don’t read or speak Japanese, but it’s not impossible. The easiest way to get there is take the Yamanote line (JR green line) from Shinjuku (or any other station on the Yamanote line) to Nippori station. From there, transfer and take the Joban line (JR blue line) to Ushiku Station. If you leave through the east exit of the station, you will find the bus stop area. From here you will need to catch the bus at the number 2 bus stop and that will take you all the way to the Great Buddha. From what I remember, these buses didn’t have any English on them so my suggestion is to just ask the bus driver if he goes to Ushiku Daibutsu. This can easily be done by asking just the name along with a ‘yes?’ or a nod – he’ll get the idea. If you ever get lost or confused on where you are supposed to go, you can always ask for help. A one way trip from Shinjuku costs about 1800 yen and take about 1 hour and forty-five minutes. Seems far and expensive, but I promise you, it will be worth it in the end.

Ibaraki doesn’t have much to offer in comparison to Tokyo, but it certainly does have it’s qualities. The giant statue of Buddha is one of those amazing features. When I lived in Japan, I was fortunate enough to be able to join the badminton club at my exchange school. If it hadn’t been for them, I would never have been able to experience such a spectacle. In fact, I didn’t even know it existed until they mentioned it. Not once did any of my Japanese friends, nor foreign friends who were tourist area experts ever mention it to me. I have to say, I’m glad I stumbled upon that club, because Ushiku Daibutsu was certainly one of the coolest sights I was able to see during my year in Japan. I highly recommend it as one of your sightseeing spots while you’re in Japan. It might be a little out of the way and a bit pricey to reach, but it is something you won’t want to miss out on.