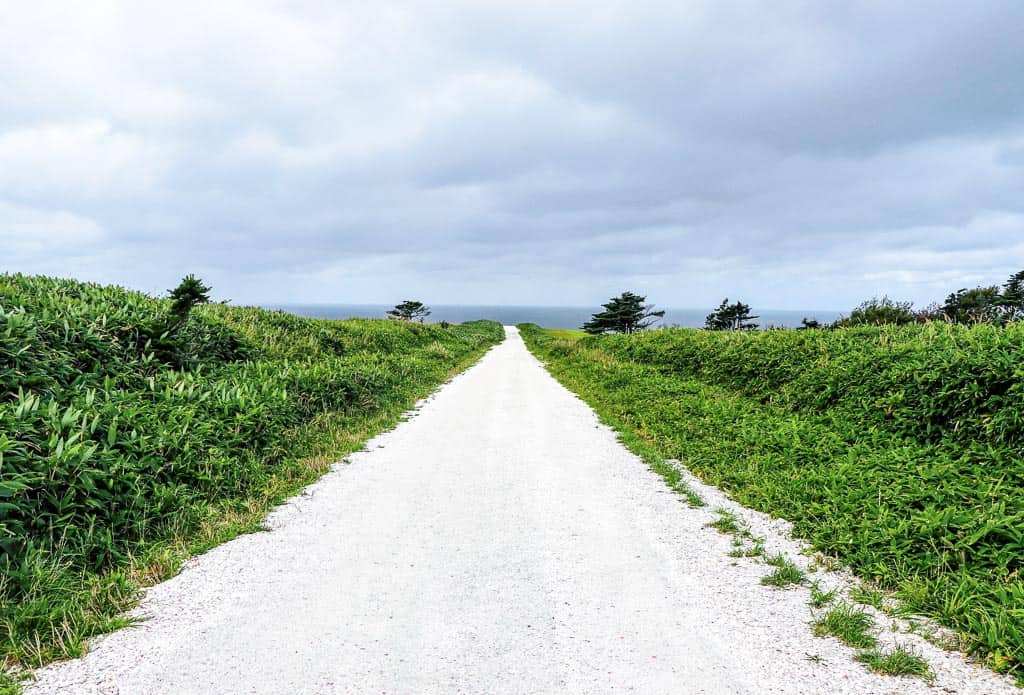 Wakkanai: The Great Outdoors and Curling on the Northern Tip of Hokkaido

By Lily Crossley-BaxterDecember 3, 2020No Comments

Learning the art of curling from a 79-year-old Japanese man had never really been on my bucket list, but it was turning out to be one of the best things I’d ever tried. I was awful — that was a given — but even as I fell for the fifth time, my instructor and his wife dusted me off, took me through the moves again, and off I launched — another inevitable fall only seconds away.

Wakkanai (稚内市) had been full of surprises, and its little-known destination status in Japan, even among domestic tourists, seemed like a shame. The northernmost tip of the Hokkaido’s northernmost island has everything from rolling green hills to Roman-inspired architecture, with shell-lined roads and scallops galore to boot. There was an intriguing backstory to this seemingly quiet corner of Japan, with battled-over islands and a growing bond with the not-so-distant neighbour, Russia. I was their newest fan, and whether it was shelling a scallop for the first time or sending a rock sliding across an Olympic-size ice lane, my time in Wakkanai was to be defined by being in the middle of the action.

A quietly busy hub home to the main JR station, Wakkanai town is a great gateway to the region. After admiring the old station signs, we headed around the corner to the imposing North Breakwater Dome. Inspired by the past’s Roman arcades, it stretches over 400m long and protects the town from the sea’s strong wind and waves. While it once housed a station, it is now better known for its appearance in films and was one of the first spots designated as part of the Hokkaido Heritage Project. As I stood in the shadows, the endless stream of arches transported me temporarily to the remnants of ancient Europe, but the distant crashing waves soon bring me back.

Above the town, Wakkanai Park offers ocean views and a collection of statues to commemorate this now-quiet area’s historical importance. Crafted by Shin Hongo, the Nine Maidens Monument remembers the call operatives who sacrificed their lives and decided to remain at their post during Sakhalin Island’s takeover. Standing tall, the Hyosetsu Gate dedicated to those who died during the island’s evacuation, caught my eye.

We hopped back into the cars and began a drive out to Sarufutsu (猿払村, Sarufutsu–mura) — a region known for movie-like stretches of road popular with bikers, with rather un-movie-like piles of scallop shells beside them. Crushed and used for scenic roads, they’re a sign of the lunch that’s soon to come.

If you prefer a hands-on approach to your lunch, then the scallop-shelling experience at Sarufutsu Marugoto Kan is too good to miss. I had only ever seen scallops neatly presented on restaurant plates before now, so donning gloves and being handed a shell was a little intimidating. As the staff walked me through the whole process, it was smooth and surprisingly simple, from prising open the shell to sliding the tool under the fleshy scallop. Once you’ve separated the two, you can rinse it gently in your hands and prepare it before replacing it into the shell and carrying it to the table for lunch!

As your donburi arrives, your scallop will be bubbling away behind it on the griddle. Add your butter, and you’ll be ready to enjoy your own hand-prepared starter. Opting for the crab, scallop, and salmon seafood bowl, I loved the mixture of textures and subtle flavours — especially comparing the cooked and raw scallop.

On the way out, you can browse the countless local souvenirs, ship fresh scallops to friends, and try a local pudding (no scallop involved!).

Cutting across to the west, we aimed for the largest marsh in Japan — the Sarobetsu Wetland Center. Part of the Sarobetsu Plains, the wetland covers an area the size of Tokyo Dome and is a fantastic insight into the local biodiversity and the community that relies on the surrounding land.

From the interactive displays and videos of the main hall, our guide, and keen biologist Toshihiro Shimazaki, led us into the rain— his infectious enthusiasm entirely un-dampened by the drizzle. From tiny exploding seed pods to delicate flowers and spider-like moss, we are shown the minuscule elements that form the wetlands and learn of the unique habitat they create. Wooden boardwalks make exploring easy for all ages, while the routes can be extended or shortened to suit, with observation decks and signboards dotted along the way.

Winding back up towards Wakkanai as the evening drew in, it was time for the wildcard activity of the day: curling. A winter sport with a niche following, curling is something I never thought I would be able to try — that is, until we arrived at the new Midori Sports Park on a rainy afternoon in Wakkanai. Introduced to the area by Canadian Olympian and coach, Wally Ursuliak, there is now a dedicated sports hall used by local teams. They are scheduled to host the upcoming Pacific-Asia Championships.

Inexperienced, to say the least, I donned a warm coat, helmet, and rubber shoes and was shown the ropes by local teachers Mr and Mrs Miyajima (79 and 73, respectively). Sliding helplessly to launch stones across the ice, my efforts were pitiful but supported with wholehearted enthusiasm from the instructors nonetheless. As they entertained us with stories of their teams and demonstrated effortlessly, the hour flew past, and I was left with a love of the sport as well as real admiration for their skill.

Retiring for the night, I ached in places I didn’t know was possible. Curling had exhausted me, and a quick soak in the natural hot springs was called for.

Starting early the following morning, we set straight for the two Capes of Wakkanai. Meaning ‘cape like a jutting chin’ in the indigenous Ainu language, Noshappu is the very tip of the Wakkanai Peninsula’s west side. Known for incredible sunsets and the chance to see dolphins, we knew it was best to visit in the late afternoon. But with a tight schedule, we hoped it would be worth it even in the morning. Luckily, we were correct.

The expanse of the sea was overwhelming, with Rishiri and Rebun Island in the distance, and the knowledge that Russia was not too far beyond. After I snapped a shot of the landmark dolphin statue, we headed onwards along the coast towards the second cape of the day.

The Northernmost Point of Cape Soya

Winning the title of Japan’s northernmost point, Cape Soya was our final destination before returning to Wakkanai airport. Marked by a striking northern-star inspired statue and with Sakhalin Island visible in the distant horizon, this windswept spot is home to an intriguing collection of memorials. From the celebration of dairy farmers producing a million litres of milk to the mourning of the KA007 aircraft disaster victims, the unusual structures joined together to form this small outlook’s history.

I received a certificate to show I had visited – an unexpected but delightful tradition. As queues gathered for the famous scallop ramen beside the abandoned watchtower, we headed up into the hills, seeking sweeping views. And boy, did we find them.

The Outdoors From the Seashell Roads of Soya Hills

Famous for the white roads formed using crushed shells, the Soya Hills (宗谷丘陵) are joyously green, dotted with cows and wind farms alike, not to mention the occasional deer. The road is popular with bikers, and the contrast of blue skies and sea is striking even on gloomier days. The route stretches 3km and is also great for cyclists, with plenty of viewpoints to stop at and admire the view. I stop briefly to collect a shell, weathered and tinted purple. It seemed incredible the entire road stretching before me was made from these delicate pieces.

How to Get to Wakkanai

Wakkanai can be reached by train or flight, as it has a JR train station as well as a small airport. There are seasonal flights from Tokyo Haneda airport direct to Wakkanai which take just under two hours, while it is a 1-hour flight from Sapporo. By train, it takes 5 hours from Sapporo with the Ltd Express Soya offering a direct route for around 10,000 yen. This journey is covered by the JR Rail Pass, as are the more frequent indirect routes which require a change at Asahikawa.

As we returned to regular roads, now dull in comparison, we made for the airport. I hadn’t known what to expect when I visited Wakkanai, but it had amazed, surprised and charmed me. While I may never take up curling professionally, getting out onto the ice with septuagenarian teachers was a story I couldn’t wait to tell. At the same time, those dreamy views across rolling hills would be my daydream material for weeks.