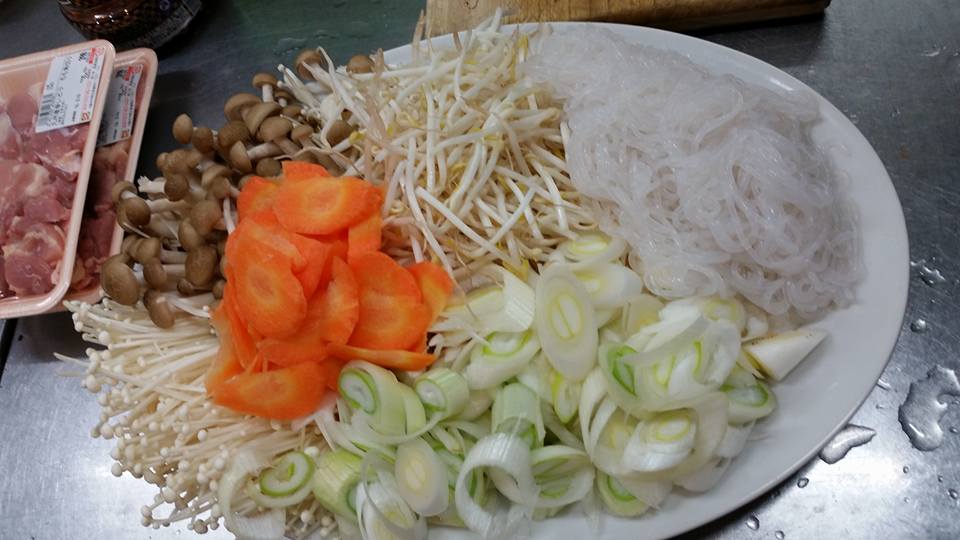 Japanese hot pot – nabemono, or just nabe (pronounced nah – bae) – is a typical and simple winter recipe. It’s a type of hot pot dish, while ingredients can completely depend on the preference of those eating it. In winter, you may be looking to warm up with some delicious and fun Japanese food. As a shared dish, the best thing about Japanese nabe is that it is both an incredibly fun, social food for enjoying with friends or family. It keeps your belly warm! 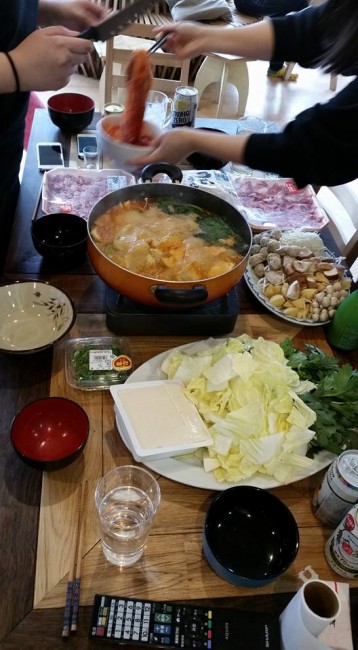 What Goes in the Hot Pot?

In Japanese, Nabe means pot, while mono means thing – nabemono’s meaning literally translates “things in pot”. Some commone Japanese hot pot varieties are Sukiyaki, shabu-shabu and oden.  Sukiyaki and shabu-shabu are very similar nabemono, but sukiyaki tends towards sweetness. When cooking sukiyaki hot pot, the meat, vegetables and noodles are typically cooked with a sweet and salty soy sauce that have bold, strong flavours; mirin is generally used for adding sweetness to this recipe. Shabu-shabu nabemono recipes utilise a subtle kombu based broth, while thin pork and/or beef slices are dipped into the hotpot to cook them. The cooked meat then often gets dipped into sesame or ponzu sauce. Oden stands apart as a very different nabe recipe; generally oden has no noodles. Oden can often be found at convenience shops during Japanese winter. Various Japanese foods comprise Oden, such as daikon, boiled eggs, konjac, and fish cakes. The ingredients simmer in hot water lightly seasoned with soy sauce. 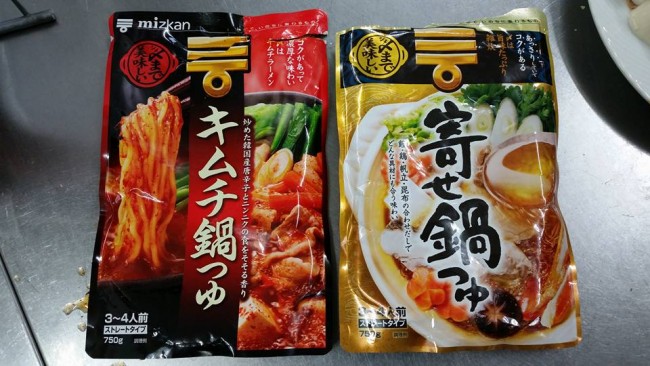 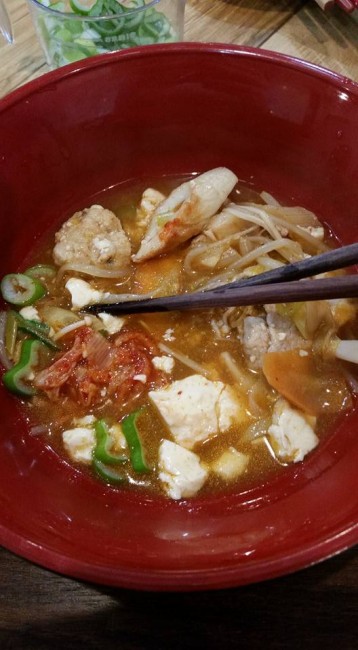 With a recipe for nabe at your own home, there are a few additions that can really make your nabe experience quite similar to one within a Japanese home. Firstly, everyone gets two bowls: one for their rice, one for loading up with their next serving from the nabe pot. In our house, bowls are small – the size of miso soup bowls. This is more than enough because nabe is a very filling food! Serve your nabe in its pot. It is even better if you have a portable stove that you can put in the middle of the table for keeping the nabe hot (this is the meal’s main idea). When you pick up some wet nabe pieces with your chopsticks, a dab onto your rice before eating is normal. This gets some delicious hot pot broth all over your rice. 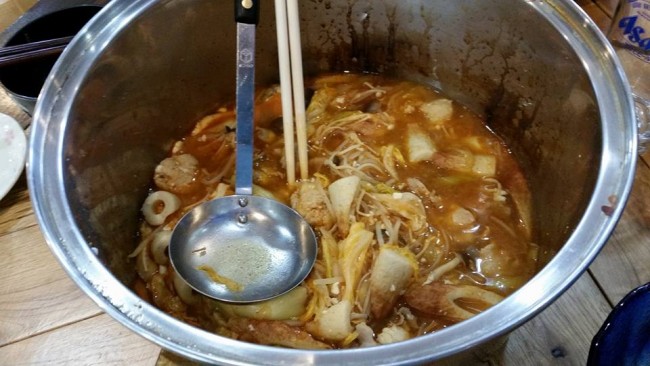 Homemade kimchi nabe in the pot.

There is no limit on what you put into your Japanese nabemono during winter, but if you want a nabe recipe used by the Osaka locals, then try the following. 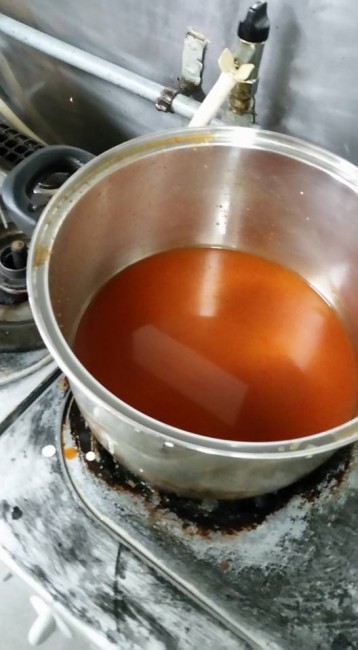 Making the nabe soup base first. 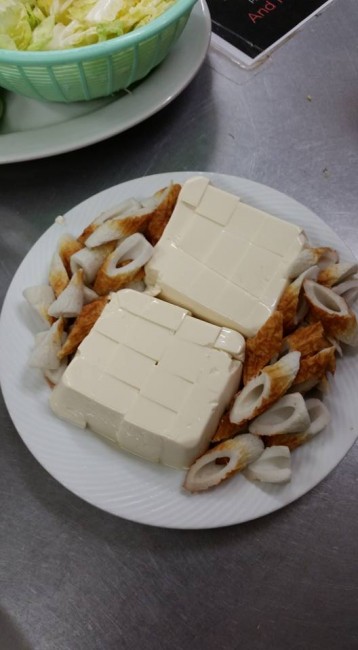 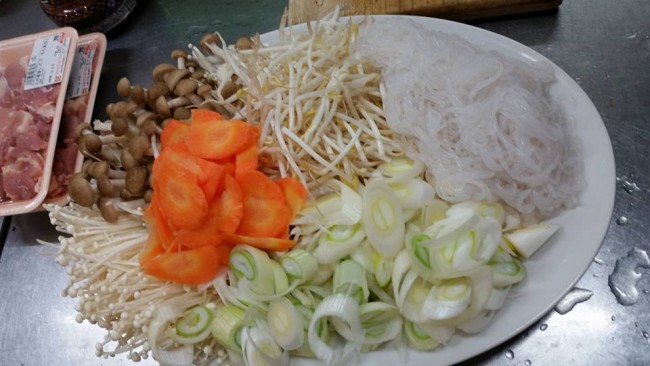 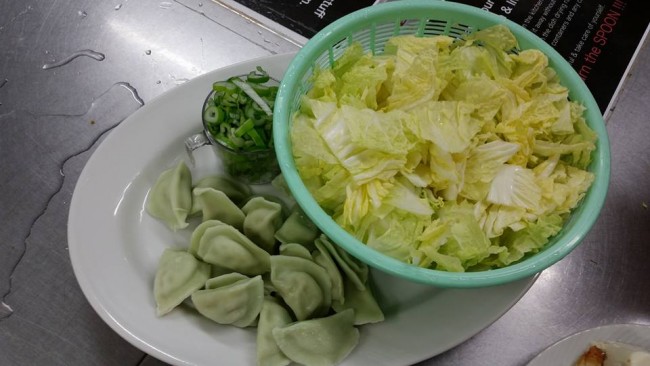 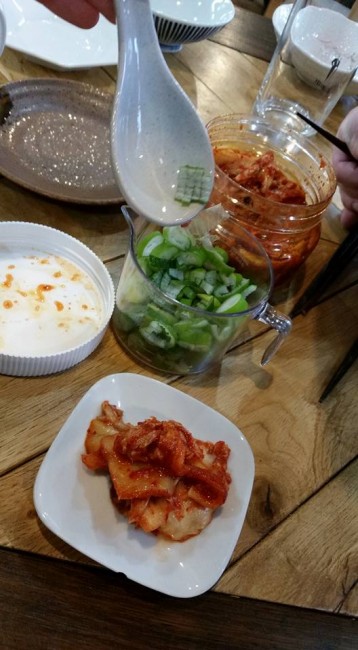 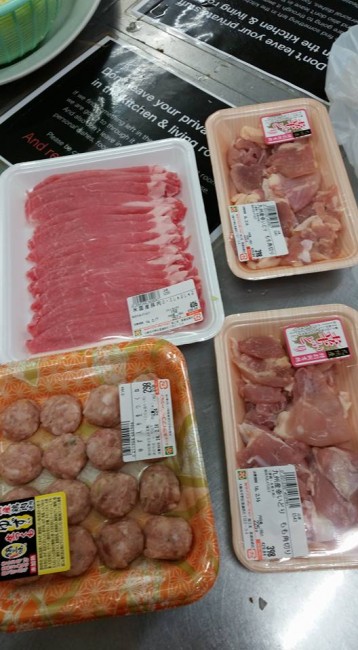 Meat for the nabe.

Directions:
1. Cut, wash and prep all your ingredients. Particularly, the vegetables should be bite-sized cuts. Displaying all the ingredients nicely on plates prior to cooking is standard. It also helps continually “restocking” the nabe throughout the meal.
2. Bring about 3 inches of water to a boil on the stove using the biggest pot you can find. Add dashi seasoning. Alternatively, add your packet soup mix and top up with some water.
3. Add half of all the hard ingredients. Carrots, daikon.
4. Add half of the chicken. Allow it more time to cook.
5. Add half the remaining ingredients listed under “to go into the nabemono”, EXCEPT for the udon!
6. You should still have half of your ingredients on the plates, unused.
7. Place a lid atop the big pot, simmering on medium or high heat until all the ingredients are soft.
8. Place the kimchi and sliced peppers into the bowls on the table. People can season their dishes to their own taste using these.
9. Once all the ingredients are cooked and soft, take place the whole pot on a heatproof mat or tea towel at the middle of the table. Use a ladle and long cooking chopsticks for allowing people to fill up their bowls.
10. Once you are finished with the ingredients inside the soup, top it up again with the rest and repeat the whole process. You can do this at the table if you have a portable cooking stove. If not, just take the hot pot back to the stove top for another 15 minutes while you cook up the remaining ingredients using the remaining broth.

In the last stages, when people are finishing the second round, add the udon and let it cook. This is the last thing left, and will ensure that everyone is completely stuffed!