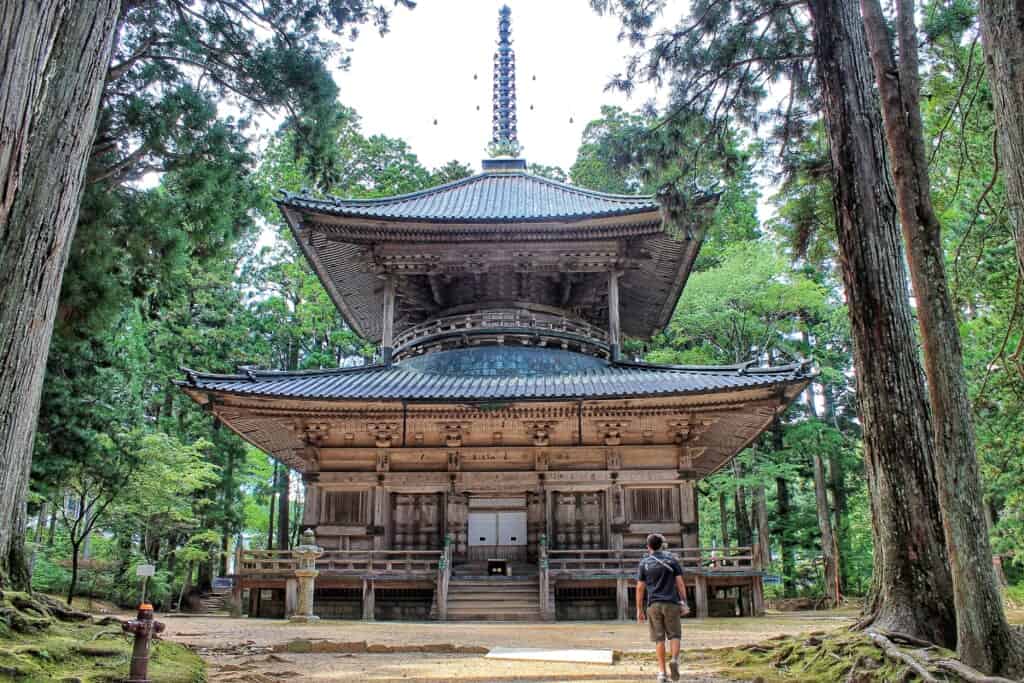 When I think of Japan, I often picture a country whose technological and avant-garde side contrasts with a more traditional and mystical soul. If you are looking for a place where you can closely experience the spiritual side of the country, I wholeheartedly recommend a visit to Mount Koya, or Koyasan (高野山), an important monastic center and famous pilgrimage destination.

Mount Koya is considered one of the most sacred places in Japan and is just a short trip away from Osaka. It is the seat of the Shingon school, a sect of esoteric Buddhism introduced in Japan in 805 by the monk Kūkai, also known as Kōbō Daishi. Mount Koya hosts the monk’s mausoleum, representing the starting and arrival point of the Shikoku 88 temples pilgrimage — a journey that winds for about 1,400 kilometers through the sacred spots of the island.

Visiting Mount Koya means having the chance to discover Japan’s most spiritual and secluded side, including one of the most beautiful and special experiences that the country has to offer: the shukubo (宿坊), an overnight stay in a real Japanese temple in close contact with Buddhist monks.

I recommend spending at least a couple of days on Mount Koya to experience lodging in a Japanese temple and allow yourself some time to visit the area. The sacred Mount Koya, a UNESCO World Heritage Site since 2004, while not very large, is home to many places of worship and nature hiking trails that are worth exploring.

Visit Danjo Garan, A Temple Built by the Founder of Shingon Buddhism

Once you reach your destination, the first stop I recommend is the Danjo Garan (壇上伽藍). This is a temple complex built in 826 by Kōbō Daishi, who established his doctrine here and was then brought to completion by his successor, Shinzen Daitoku, in 887. This sacred area consists of about twenty buildings, the Konpon Daito pagoda (根本大塔) being the main one. At 45 meters high, its characteristic bright red color will surely catch your eye. The pagoda harbors several Buddhist figures and statues; the one that stands out is the golden statue of Dainichi-Nyorai, the Vairocana Buddha, or Cosmic Buddha, the central figure of Shingon Buddhism.

Leaving the complex, you can walk to Kongōbuji (金剛峯寺), the head temple of the Shingon sect, constructed in 1593 and known for its beautiful fusuma (sliding doors), decorated in the style of the Kano school of painting. Inside the temple, you can also admire the enchanting Banryutei (蟠龍庭) rock garden, the largest dry garden in Japan. The main observation point is from the tsuridono, the veranda surrounding it. About 140 granite stones from Shikoku dot the garden, depicting two dragons emerging from a sea of clouds to protect the temple. At the end of your visit, don’t miss your chance to taste some good green tea and wagashi, traditional Japanese sweets, that will be served to you inside a large hall.

For a short break, you can stop in one of the many small joints that populate the village’s main street. From here you can then easily reach Okunoin (奥の院), the most significant and largest Buddhist cemetery in Japan, hosting the mausoleum of Kōbō Daishi. The so-called Ichi-no-bashi (一の橋, “the first bridge”) marks the traditional entrance to the cemetery. Before crossing it, remember to bow as a sign of respect. Across the bridge, you’ll find yourself surrounded by a magnificent cedar forest.

Walking the two-kilometer paved road through the cemetery, I was deeply impressed by the absolute silence and aura of sacredness. On either side of the path are hundreds of tall cedar trees and some 200,000 tombstones, as well as funerary monuments and mausoleums. The scenery is very charming. They say that crossing the cemetery in the evening, surrounded by darkness, is a mystical experience. Still, I was satisfied with the afternoon light: it was just before sunset, and it felt like everything was suspended in time, motionless.

The traditional route to the mausoleum begins at Ichi-no-bashi, but you can cut the time by taking a bus to the Okunoin-mae bus stop (奥の院前), which is about halfway down the route.

What You’ll Get During Your Temple Stay in Koyasan

After a day of hiking around the pilgrimage destinations of Koyasan, you can find shelter in one of the 50 temples on the mountain that provide lodging for visitors. As you can imagine, these accommodations are far from tourist hotels: they’re authentic religious facilities, where bonzes (a Japanese or Chinese Buddhist spiritual teacher) host monks-in-training and pilgrims, as well as tourists who want to learn more about Japanese Buddhist culture.

How to Book Your Temple Stay

Booking your stay is fairly simple: from the official website of Koyasan, you can choose between different accommodations, each providing various services, for a cost that ranges between 10,000 and 16,000 yen. The stay typically includes dinner and breakfast in the style of shōjin ryōri (精進 料理), a type of vegan cuisine that spread in Japan at the same time as Buddhist practice in the sixth century. This cuisine doesn’t use meat, fish, eggs, and dairy products. In addition to this, no particularly fragrant spices are used, nor are vegetables such as garlic and onions that would cover up more delicate flavors.

Participate in Prayer and Meditation Sessions at Japanese Temple Stay

Spending the night in a Japanese temple is surely a unique experience, but you’ll have to follow some rules: you’ll have to adapt to the rhythms and hours of the temple and be careful to avoid inappropriate behaviors. My advice is to arrive no later than 5:00 pm. Depending on your temple stay, dinner is normally served before 6:00 pm, and you may not be allowed entry after 10:00 pm. Guests are also invited to participate in morning prayers, which usually begin around 6:00 am and are followed by breakfast around 7:00 am. Some temples also hold meditation sessions or sutra copying in the late afternoon, which are free to attend. During your stay, you’ll also get to see the temple’s cultural treasures, halls, and garden.

My One Night Stay at Fukuchi-in Temple

I had the opportunity to stay overnight at Fukuchi-in, one of the temples belonging to Kongōbuji, built over 800 years ago around the figure of Aizen Myo-o. Here you can stay in traditional Japanese rooms with tatami mats and futons. This is also the only temple in the area that comes with a small and very nice onsen (Japanese hot spring). The temple is surrounded by a beautiful karesansui (dry garden) which holds a profound feeling of mysticism, making it the perfect spot to temper your spirit.

My experience at the temple was immersive, to say the least. Dinner is served in your room, in a solemn atmosphere. In particular, I was impressed by the attention and care given to the raw ingredients, which are presented at their simplest. From a purely aesthetic point of view, the meal is a real spectacle for the eyes. Among the dishes offered, I got to taste specialties of konjac, yuba (tofu skin), as well as vegetable tempura.

After this soul-cleansing dinner experience, the rest of the evening went by peacefully. The temple is surrounded by silence, and the only sound I could hear was the creaking of the wooden boards. The garden around the temple let me clear my head in absolute relaxation. I took the opportunity to try the onsen (separate by gender), which also comes with a small outdoor pool. When night falls and the temple is enveloped in darkness, the atmosphere is almost unreal.

Be sure your alarm clock is set: the next morning, a Buddhist ceremony awaits as early as 6:00 am. Go down to the prayer hall and join the rest of the temple guests to attend the service, consisting of the recitation of Buddhist sutras, chanted in a sort of litany in front of the temple icon. During the ceremony officiated by the monks, each of the participants is asked to bow and pray in front of the altar, throwing some powdered incense into the censer. The ceremony lasts about an hour, and at the end of it, the monks will show you the treasures stored inside the temple. After the service, a breakfast of tofu, rice, and vegetables (a lighter version of the previous night’s dinner) will be served to you in your room.

How to Get To and Around Mount Koya

The easiest way to get to Mount Koya is with Nankai Railways, from Namba or Shin-Imamiya stations in Osaka to Gokurakubashi Station (極楽橋駅), a journey that takes about two hours. From Gokurakubashi Station, take the cable car for a five-minute trip to Koyasan station. Alternatively, you can walk the traditional trekking route called Fudozaka, a steep 2.5 km paved path that will take you from the train station to Nyonindo Temple (女人堂) in about 2 hours.

There are five limited express lines that take around 80 minutes from Namba, Osaka to Gokurakubashi Station. You can also choose to take an express or rapid train, with a travel time of about 100 minutes to get to Gokurakubashi (note: some trains go all the way to Hashimoto Station, where you’ll have to change to the local train to Gokurakubashi; others are dividing trains, with only two cars detaching to make the last stops between Hashimoto and Gokurakubashi).

The total cost of the trip (one-way) is 1,680 yen by Limited Express train and 890 yen by express or rapid train.

Since it’s not permitted to walk along the street which connects Koyasan Station to the town center, you’ll have to take one of the Nankai Rinkan buses. There are two lines that leave from the station: the Daimon (大門) and the Okunoinmae (奥の院前), which will take you to your destination in about 10 minutes. A third line, the Senjuinbashi (千手院橋), connects the two ends of the village: the Daimon gate to the west (traditional access point to Mount Koya) and the Okunoin cemetery to the east.

The trip is not covered by the Japan Rail Pass, so your best option is to purchase the Koyasan-World Heritage Ticket, which comes in a regular (3,080 yen) and limited express (3,630 yen) version. This pass is valid for two consecutive days and includes the Namba/Shin-Imamiya-Koyasan round trip, free boarding on the Nankai Rinkan buses, and a few discount coupons for the main attractions of Koyasan.

A trip to Mount Koya is probably one of the most exciting and unique experiences you can have in Japan. Visiting this area, the cradle of Japanese Buddhist culture, and sleeping in a temple was a chance to connect with the culture of Japan, a way to discover and experience its civilization up close. Lodging in a Buddhist temple was a real blessing for the spirit, which let me unplug from my routine and the stress that comes with it. Here you’re free to slow down. There’s not much to do except enjoy the beauty of nature, the sacredness of the temples, and the wonderful gardens shrouded in silence.