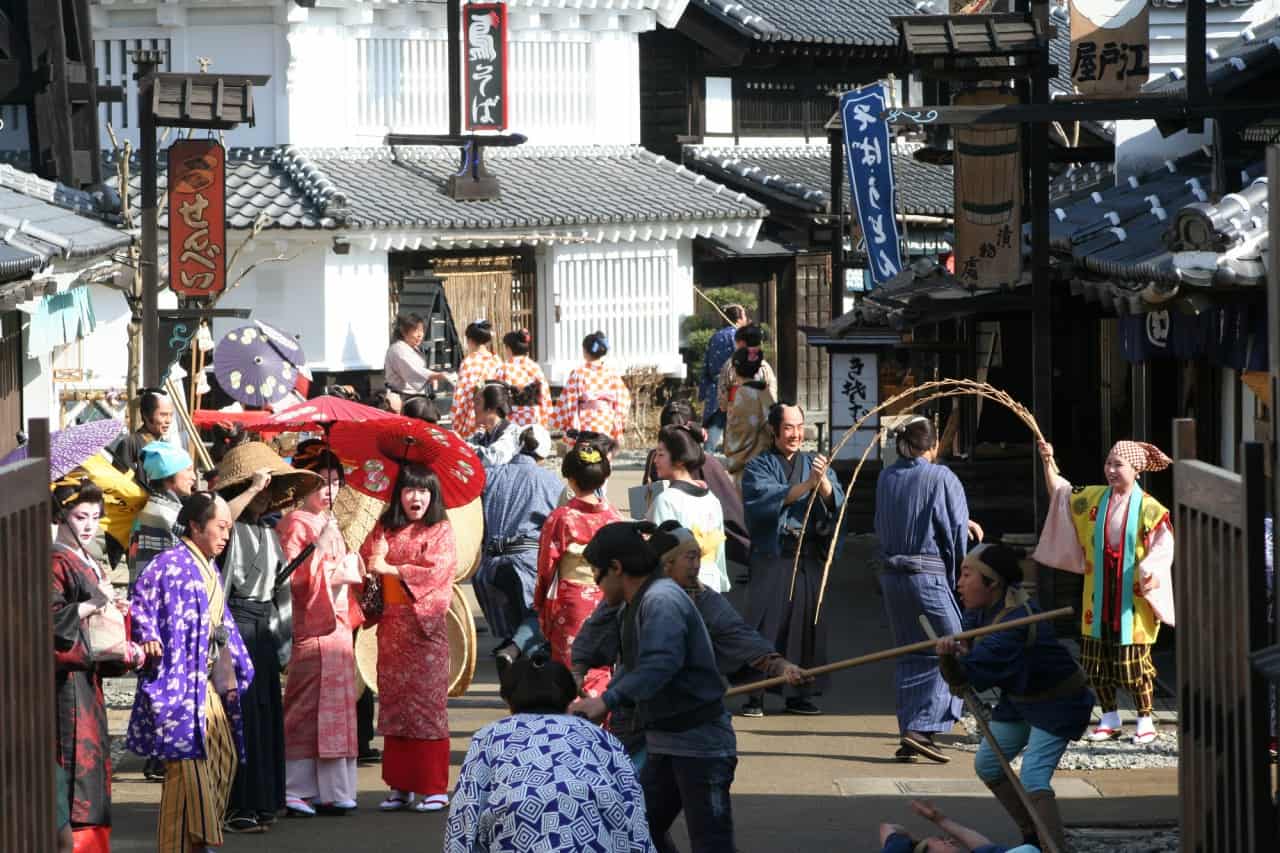 Nikko: Not Just Shrines and Tofu, but Also Ninjas and Samurai!

If you checked out our previous articles on Nikko, you may be interested in some other things to do around town:

Edo Wonderland is a theme park about 30 minutes away from Nikko’s city center. Rather than traditional theme park rides and attractions, however,  you get to experience a full-scale replica of an Edo Period (1603-1868) village. This means period clothing, old buildings, samurai, and ninjas! In true Edo style, when you get to the front gate, there is a spear wielding guard waiting to check your pass. Once you get past him, there is a serene bamboo thicket on the way to the village. It is worth noting that this place is extremely foreigner-friendly, with English language pamphlets, signs, and very kind and attentive staff.

Though you might get slashed by a passing ronin warrior at least once, it is all in good fun, and guests quickly get into the samurai mood. Some even decide to blend in, with traditional robes and kimonos available for the whole family. Kids can get their own swords, or learn how to throw ninja stars or shoot archery.

Since the park emulates an Edo village down to the detailed architecture, there are various old buildings you can enter freely. Inside certain buildings, you can find gift shops, food, or host various old-timey games of chance. Replica shrines are also in abundance, and sure look like the real thing!

Outside in the village grounds there is a play area where families can play with traditional Japanese toys such as kendama and koma, for free! The food is also a must, whether you grill your own yaki-senbei crackers or just want some freshly cooked oden stew. For the adults, there are also multiple vendors selling delicious old-fashioned amazake, a sweet and hot liquor that is great this time of year.

Though there can be impromptu performances from the actors at any given place and time, for those who are not so good at improvising there are theater shows as well. There are 8 different shows, each running multiple times a day. The kids or the young at heart might want to check out the “Nyan-Mage Theater.” Nyan-Mage is the cat mascot, as well as a crime fighter in his own live action adventures. This show is constantly playing, so no need to worry about waiting your turn! Also, if you are late to many of the theater shows, it may be possible to go in part-way through. The staff, despite being in character as gruff samurai, are very kind and accommodating.

There are also comedy shows featuring members of the audience! But to participate, you typically need to have some Japanese speaking ability.

While walking through the village, one thing that struck me in particular was the lack of any and all ninjas. Where were the ninjas? It turns out, they were in their own studio stage. The ninja show is one of the highlights of Edo Wanderland. If you have any interest in ninjas, this may pique your interest. In contrast to the brightness of Edo Wanderland, the Ninja Theater quickly went pitch black, and from stage left, stage right, from the ceiling rafters, out came the ninjas! These are professional stuntmen too, with nary a wire to be seen.

The focus here is more on the action and not acting, so you can enjoy regardless of your Japanese ability. It is also mostly family friendly, as the stabbing and slicing does not let lose any tomato sauce.

Edo Wanderland is a great place to stay for part of an afternoon, even just walking around there is always something new to see and do. There are also a bunch of other things nearby. From the bus stop outside, you can head to the Trick Art Center, the Tobu World Square and the 3D Space and Dinosaur Museum! They are all within 10 minutes of each other, and are well worth a stop. Finally, the last stop is none other than Kinugawa Onsen! An onsen is a public bath with heated water. They are very relaxing and popular among Japanese people–an important aspect of Japanese culture.

You can have your first onsen experience right in front of Kinugawa Onsen Station, with the ashiyu foot baths. Shake off your shoes, meet some new friends and relax for a bit! The surrounding area, referred to as the “Onsen Village,” is full of cafes, shops and hotels.

The aforementioned hotels are where you can find most of the onsen. They are full service luxury hotels, and equally as well known for their onsen and restaurants. Many people who go there are not even hotel guests at all! However, for guests there are bus services to other areas of Nikko, so this can be a very convenient place to stay if you are thinking of a more leisurely type of trip. If you have to take one gift back from the many gift shops, you must try some special Onsen Manju cakes! There is also a special type of Manju, called Yuba Manju, that can be found for sale at some shops. We have even more great things to do in Nikko that we cannot wait to tell you about, so check back soon!

(One word of caution for those taking the train from Kinugawa Onsen station: the local train makes many stops in between Kinugawa and Tobu-Nikko with long waits at some of the stations, it would be best to try and get an express train to at least Shimo-Imaichi if possible.)

One Day Pass at Edo Wonderland: