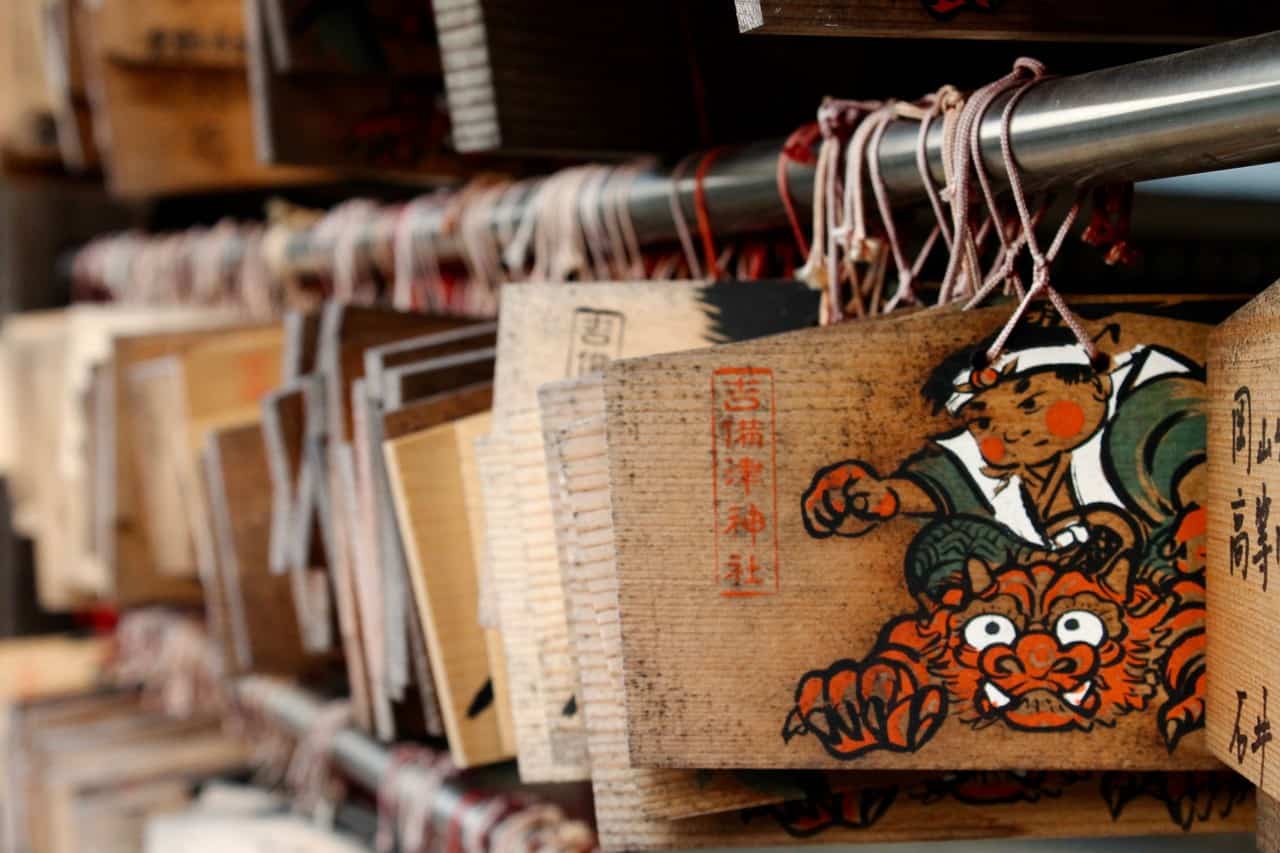 The shrines of Japan are surprisingly diverse. While these scared grounds may all share a familiar torii gate, depending on the shrine you visit you may be praying for everything from fertility and a good rice harvest, to a successful soccer match or a healthy head of hair. But Kibitsu Shrine in northern Okayama City stands apart from other shrines for its dedication to Momotaro, the much-celebrated fictional character “Peach Boy.” 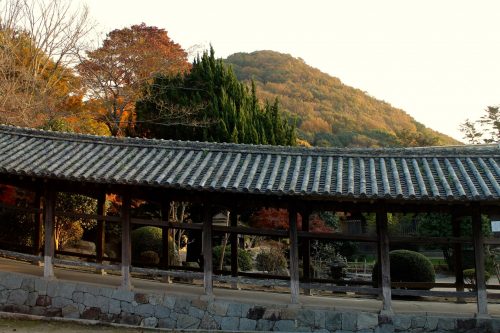 Okayama, the birthplace of the Momotaro “Peach Boy”

Momotaro is one of Japan’s most well-known and beloved folktales. Nearly every child in Japan has heard the story at least once and its protagonist has been depicted in countless story books, manga and animated movies.

Most renditions of the story feature an elderly childless couple who come upon a giant peach floating down a river near their home. When they go to cut into the peach and enjoy the mysterious fruit, the peach speaks to them. Suddenly an infant boy emerges from inside and announces he has been sent to the couple from the gods. 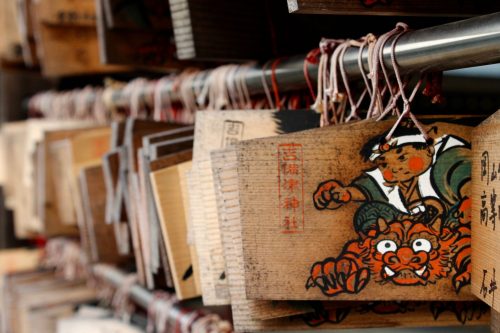 In adolescence Momotaro becomes a fierce oni (ogre) hunter, setting off on a quest to vanquish the ogres of Oni Island. On the way he assembles a band of animal sidekicks, including a dog, a monkey and a pheasant, who each join his journey in exchange for a kibi dango (mochi dumpling). Together they set sail for Oni Island, ultimately infiltrating the fortress and defeating the evil inhabitants. The tale of courage has been passed down to Japan’s youth for hundreds of years.

Many believe the folktale of Momotaro originates in Okayama Prefecture. There are many locations in the prefecture that are believed to be the scenes of battles between Momotaro and Oni. Amid this speculation around the myth’s true origins, Kibitsu Shrine in Okayama City figures prominently, some even say that kibi dango sweets were first served at the shrine. 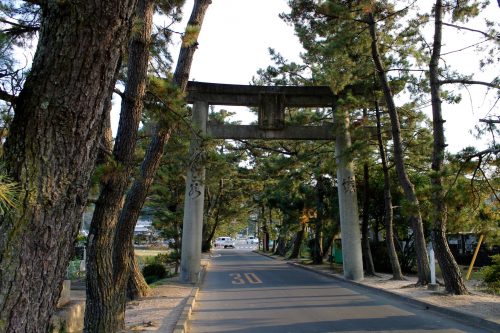 Located a short train ride away from Okayama Station, Kibitsu Shrine commemorates its ties to Momotaro with omamori (amulets) in the shape of peaches and ema (wooden prayer plaques) with illustrations of Momotaro defeating some of the infamous ogres of Oni Island. 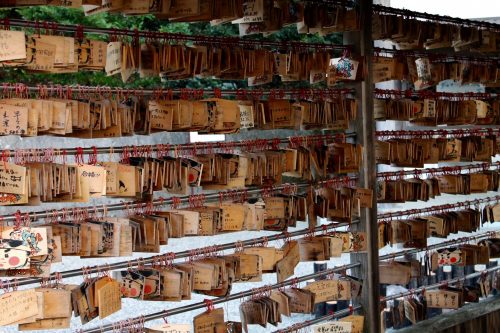 Alongside its ties to Japanese folklore, Kibitsu is a historic site with the current iteration of its main shrine building dating all the way back to 1425. Its longevity and unique architectural design, with double-peaked roofing, has made the shrine a landmark and earned it the title of National Treasure. 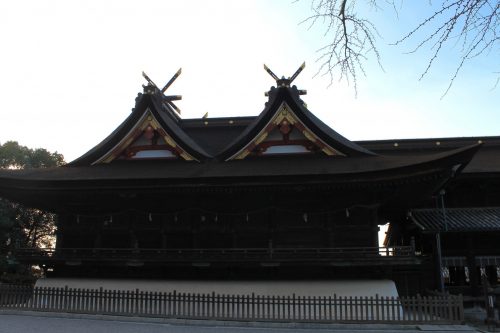 The approach to the shrine from Kibitsu Station will take you on a leisurely walk past rice fields and small townhouses. On the walk you can make out the iconic rooftop of Kibitsu peeking through the trees of nearby foothills. 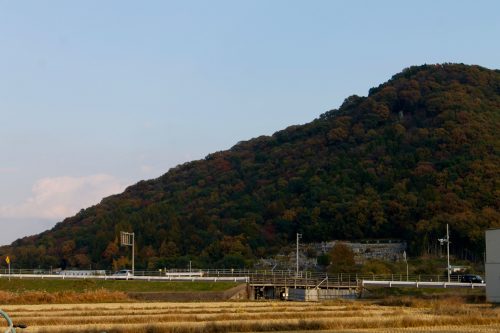 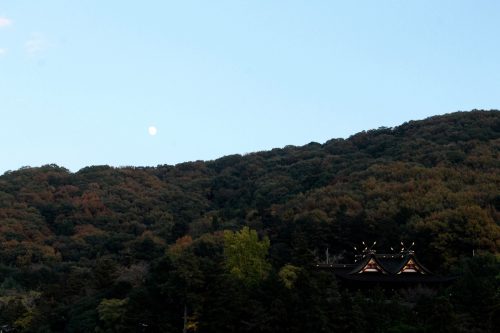 When you reach the base of the shrine you’ll need to ascend a long staircase before arriving at the main shrine building. 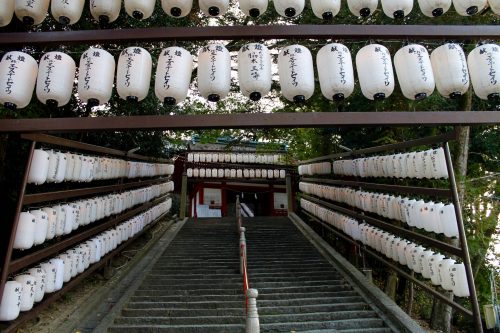 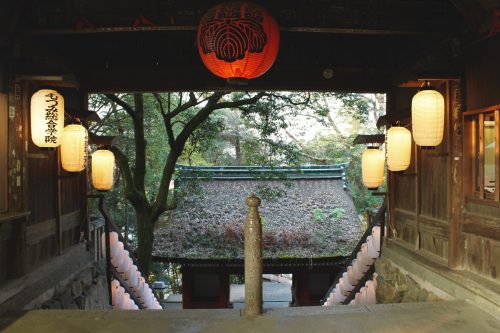 While it’s easy to be distracted by the landmark shrine building and Momotaro paraphernalia, don’t miss out on the rest of the shrine grounds. Most notably, Kibitsu is home to a continuous 360-meter long wooden corridor. The covered corridor follows the incline of the hillside, at times dipping below and above your light of sight. Its impressive length is quite an architectural display. 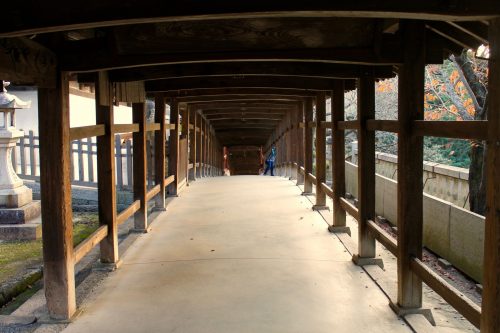 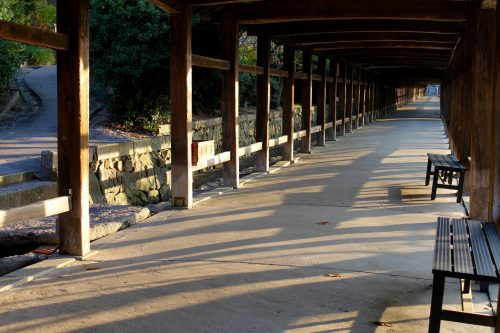 The entrance to the corridor is beside the main shrine building and features ornate carvings on its wooden beams. As you continue down the path, which is entirely outdoors, you’ll pass secondary shrine buildings and may even catch a glimpse of some stray shrine cats. 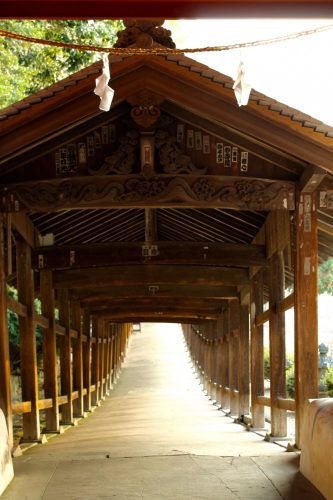 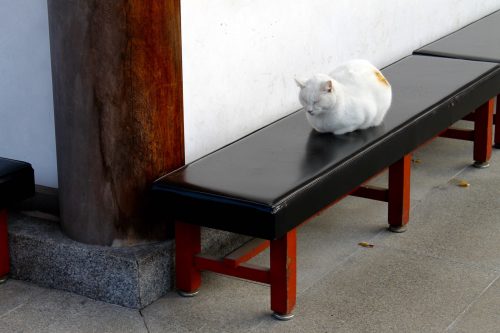 During the fall months, the corridor may also offer views of the surrounding fall foliage. I was fortunate enough to visit the shrine during golden hour, which cast the long corridor in warm sunlight and created dramatic shadows against the wooden beams. 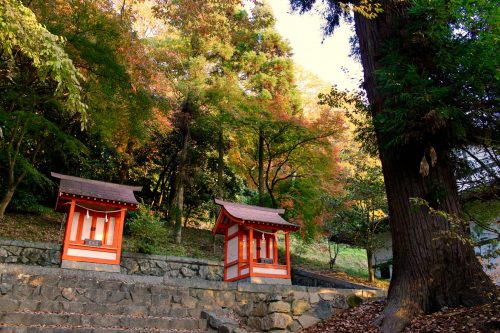 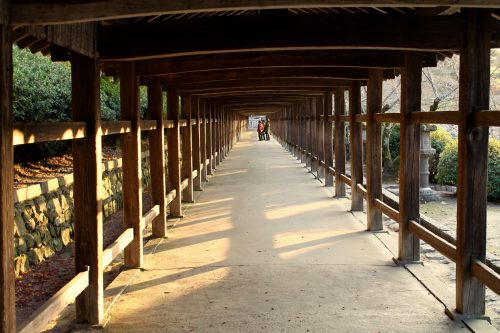 While I wasn’t able to witness this feature of Kibitsu, the shrine is also famous for the narukama shinji ritual, in which a priest uses the whistling of a steaming pot of rice to tell fortunes. The ritual originates from a myth that the ogre Ura was trapped under a steam pot on the shrine grounds. The sound of the steaming rice is said to represent the ogre’s groans during his imprisonment. The ritual cost starts at ¥3,000 yen. Ritual reception times are from 9:00-14:00 and are not held on Fridays. 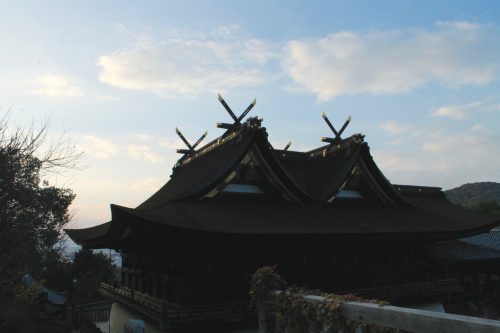 Kibitsu Station is 20 minutes away from Okayama Station on the JR Momotaro Line. Learn more about the city’s many attractions with the official Okayama City Travel Guide.