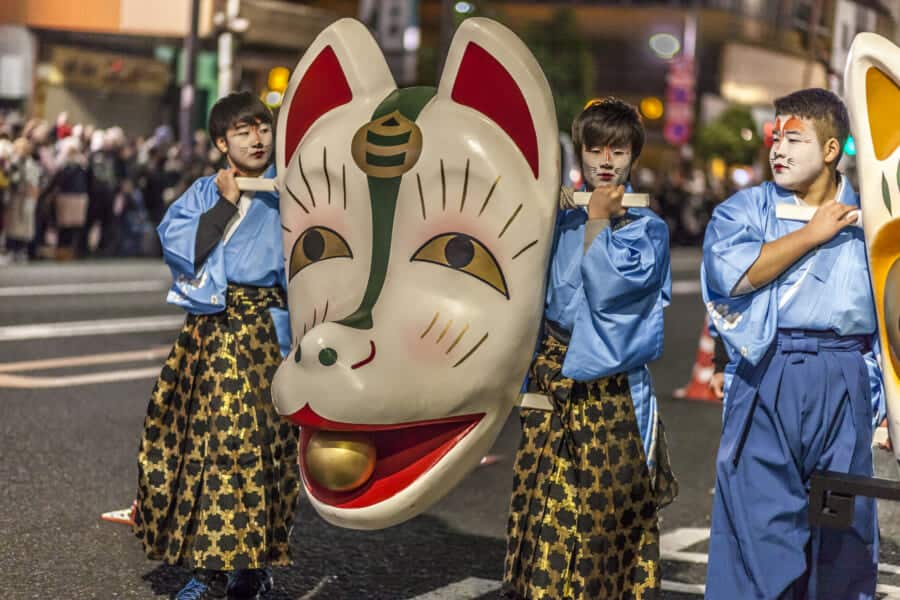 Oji Kitsune no Gyoretsu: New Year in Tokyo Like You’ve Never Seen Before

If you’re in Tokyo on New Year’s Eve, Oji is where you need to be. Oji is the magical neighborhood of the Kanto foxes, and December 31st is the most important day of the year for these mythological creatures. Don’t get scared when you see yourself surrounded by all of them; this is not a time for their usual trickery. It is a day to celebrate with humans joyfully and peacefully the transition from one year to another, wearing their best garments while paying homage to Inari, and asking for his blessings to get a good fortune for one more year. It is the day of the Kitsune no Gyoretsu (王子狐の行列 – The Fox Parade).

Why Oji? It’s where their sacred tree, the enoki (Japanese hackberry tree), is located. Once gathered under this tree, they take human form and put on their most colorful kimonos. The midnight chimes mark the beginning of a procession with Japanese lanterns on their way to Oji Inari Jinja Shrine (王子稲荷神社).

That’s what the legend says and yours truly writes these lines to confirm that it’s absolutely true.

The enoki, a tree with history and not only during New Year’s Eve

According to Japanese mythology, Inari (稲荷) is a deity that often takes the form of a fox. Traditionally, it also protects crops, commerce, and prosperity in general. As one of the most popular gods, it’s very common to find sanctuaries honoring Inari throughout the country.

The enoki, on the other hand, is a tree with an important cultural and historical tradition, considered sacred in many shrines. In addition, since the Edo period, they also functioned as a kind of proto infrastructure. The government planted them along the most important roads in the country to mark the distances for travelers. The foxes know perfectly that the enoki is the ideal place to start their celebration.

Hiroshige Utagawa (歌川広重), one of the great masters of Ukiyo-e (浮世絵), decided to depict the scene in one of his famous engravings in 1856. The story and its illustration were the inspiration for the Oji citizens to start holding the event in 1993. Nowadays the sacred tree no longer exists. In its place, there’s a tiny but very cute shrine called Shozoku Inari Jinja (装束稲荷神社, Inari Shrine of Disguise), where the paraders begin their journey to Inari shrine.

The charm of Oji’s festive atmosphere, something unique in Tokyo on this date

Although the Kitsune no Gyoretsu starts at midnight, it is convenient to be in the area several hours earlier. Not just to ensure a proper place to watch it but also to enjoy the festive atmosphere, taste the food from the different stalls and for those ready for a step further, paint their faces or to buy a mask to “camouflage” themselves among the partying foxes.

Being one of the coldest winter nights, hot sake or amazake are your friends, especially when it comes to standing guard while you wait for the parade to pass through Kita Hon Dori Avenue (北本通り). Good luck trying to squeeze yourself in the starting point in Shozoku Inari Jinja. I didn’t manage to arrive early enough, and not a single soul could fit between the huge crowd already gathered.

When midnight arrives and the New Year’s celebration begins, while chanting Akemashite omedetō gozaimasu (明けましておめでとうございます, Happy New Year), the foxes start heading towards the Inari Shrine to the sound of flutes and drums. Be aware – this phrase is only said once the New Year has begun. Up until the 31st, what you should say is Yoi otoshi o (よいお年を, Have a Happy Year).

How to participate in the event?

The parade always has 108 members, after registering themselves through the event’s official website. For 1,000 yen per person, anyone can participate until all the spots are filled. In the unlikely event that a position is still not covered by the day of the event, it’s also possible to sign up on the spot. But don’t count on it, and better sign up as soon as possible: it’s the most popular event in the neighborhood, and it grows even more so with each passing year.

It’s mandatory for those who wish to be an official part of the event to wear a kimono. Not a yukata (Japanese summer kimono), a jinbei (very informal Japanese summer clothing), or warrior costumes. It is a gala to receive the New Year, and the costumes must go accordingly. The traditional fox makeup is another requirement, either made at home or by paying 500 yen to have it done before the parade.

The final moments of the Kitsune no Gyoretsu

Once they reach Oji Inari Jinja Shrine (王子稲荷神社), at about 00:45-01:00, the foxes start climbing the temple stairs for the final part of the event.

Right beside the temple hall, there is a place where the Kagura (神楽), a ritual Shinto dance in honor of the gods, is performed to greet the New Year’s arrival.

Once the dance is over, the event is finis… no, wait. It’s already early morning on the 1st. This means that since you’re already here, you may as well be done with the first visit to a temple or sanctuary of the year. This practice is called Hatsumode (初詣).

Finally, an interesting video shows the development of Kitsune no Gyoretsu as well as the general atmosphere of the evening:

How to get to Kitsune no Gyoretsu

The main areas where the event occurs are just a few minutes’ walk from Oji Station (王子駅). It can be reached by train on the JR Keihin-Tohoku line or Tokyo Metro Namboku line. Alternatively, it’s also possible to reach Oji Ekimae stop by the Toden-Arakawa streetcar line. The parade organizers’ website is in Japanese, but there are links to information brochures in English.

Oji is a lovely neighborhood that is worth visiting any time of the year. But if you haven’t done so yet and you happen to be around the Japanese capital on December 31st, here is the perfect opportunity to greet the new year with traditional Japanese folklore which is also something unique in what Tokyo has to offer at the end of the year.