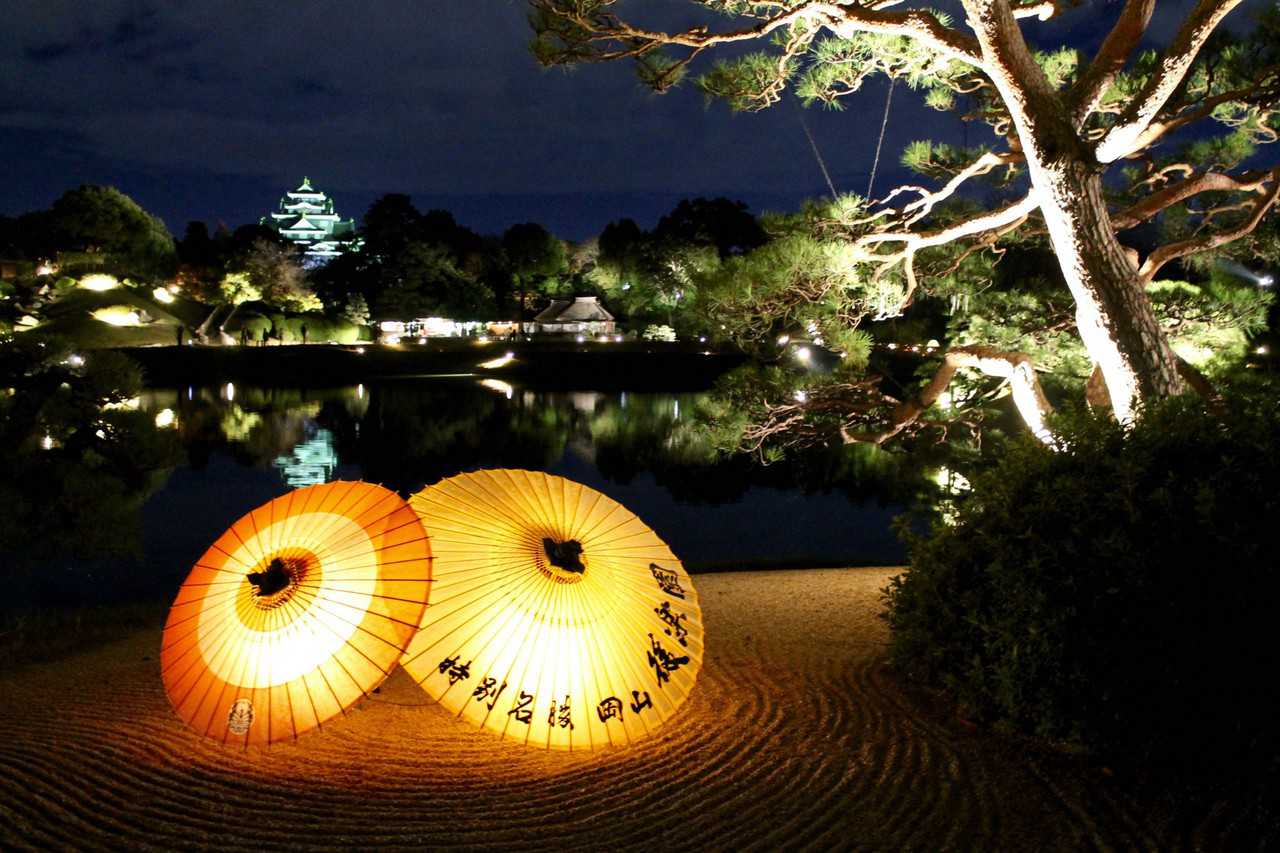 Discover Korakuen, One of Japan’s Best Gardens, and Okayama Castle During Autumn Foliage

Okayama City is full of sightseeing destinations if you’re looking to take in Japan’s famous fall scenery. The yellows, oranges and reds of autumn work their way down Honshu Island, starting in Aomori in late September and reaching Okayama by mid-November. Among the many sites for foliage gazing within the city limits, Korakuen Garden is perhaps the most famous and vibrant.

Korakuen in Fall, One of Japan’s Three Best Gardens

Korakuen is known throughout the country as one of Japan’s three best gardens. Built in 1700, the traditional garden shares this title with Kanazawa’s Kenrokuen and Ibaraki Prefecture’s Kairakuen.

In the late 1600s, Okayama’s daimyo (feudal lord) ordered construction of the garden grounds, directly behind the daimyo’s residences in Okayama Castle in order to host guests and as a relaxing retreat from his governing duties. The grounds are constructed in the Kaiyu (scenic promenade) style, which promises a new view or perspective from each point along the garden’s many winding paths.

While most of the garden were destroyed during WWII air raids, the grounds and buildings were reconstructed in the post-war period according to detailed original plans and records. While strolling through Korakuen you feel this historical atmosphere and can easily imagine Okayama’s feudal era nobility strolling across its vast lawns or sitting alongside its koi-filled ponds.

Korakuen is planned in a way that makes it worth a visit no matter the season. The plum grove blooms in late winter, shortly followed by the sakura (cherry blossom) trees of spring and then the iris grove during mid-summer. Despite the garden’s seasonal diversity, Korakuen is most popular for autumn foliage when the park opens its gates after hours for foliage illuminations. (The gardens are also illuminated for periods during spring and summer.)

During the day, Korakuen has plenty to offer the momiji (Japanese maple) hunter. Most notably, the chishio-no-mori grove of over 100 maples trees, features leaves that turns vivid red and burnt orange in November. But throughout the park you’ll find bursts of color, from the falling yellow petals of ginkgo trees to the maple trees that stand isolated on the central pond’s miniature islands. There is a teahouse that stands next to the pond where you can enjoy this scenery over hot matcha (powdered green tea) and wagashi (traditional Japanese sweets).

When I returned to Korakuen that evening for the illuminations, I found the garden had been transformed. The subtly of the foliage by day was replaced by bold bursts of color, with high beams foregrounding the maple trees against the dark night sky. While illuminations can have the tendency to be kitschy, this display was handled intelligently in a way that was meant to elevate the existing scenery.

Candlelit lanterns, illuminated traditional umbrellas and even Christmas-style lights are spotted throughout the park grounds, extending the nighttime novelty to the edges of the garden that are not heavy with foliage. The maple grove was particularly striking. While dramatic, the illumination, really highlighted the beauty of each individual maple leaf and the overall serenity of Korakuen.

Enjoy stunning fall foliage on the grounds of Okayama Castle

A short journey across the Asahi River from Korakuen are the grounds for Okayama Castle. The original building dates back to the 1500s, but the current iteration is a reconstruction from the 60s. The building, however, maintains its distinctive jet black exterior, which earned the castle the imposing nickname “Crow Castle” during the feudal era.

The castle is currently open to the public as a museum, with six stories of artifacts, historical explanations, samurai armor, weaponry and even some photo opportunities with traditional yukata garments. From the sixth floor, you can peer through the windows for a view of the city and Korakuen across the Asahi River and are treated to a panoramic view of Okayama City and its surrounding mountains. One of the most historic attractions on site is a star-viewing tower used by the daimyo’s astrologists. It is one of the only structures on site that dates back to the castle’s origins, nearly four-hundred years.

Okayama Castle, like Korakuen, enjoys lush fall foliage, with orange and yellows leaves taking over the castle grounds in November. After a deep dive into feudal history, enjoy a walk around the grounds and experience the changing colors.

During the evening, the castle illuminates its main structure and some of the most vibrant autumn leaves on site. After taking in the idyllic Korakuen at night, I recommend a stroll over to the castle for a continuation of your momiji sightseeing.  A joint ticket is available for purchase at either entranceway for 560 yen.

Learn more about Okayama City’s many attractions and other fall foliage destinations with the official Okayama City Travel Guide.