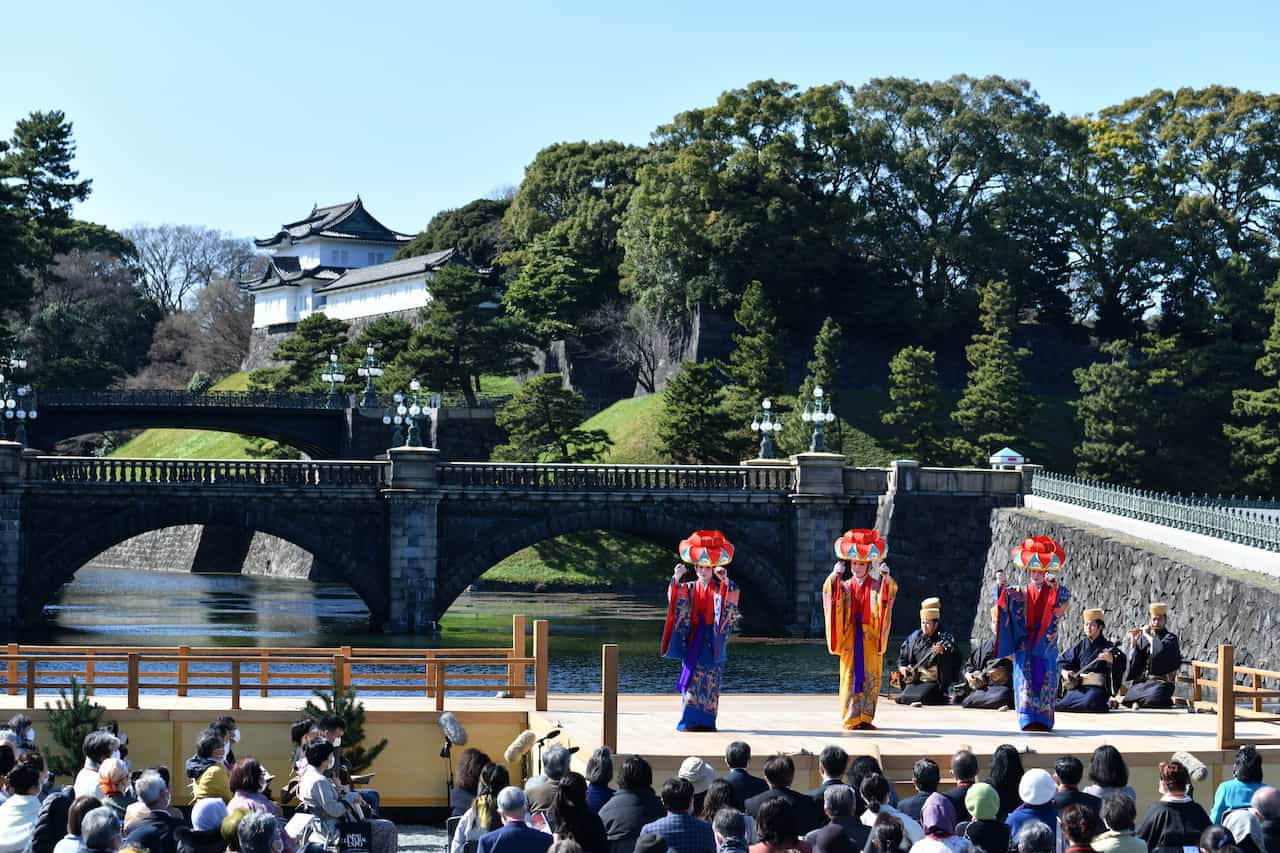 If the wind blew strong through Tokyo’s Kokyo Gaien (皇居外苑) National Garden on Sunday, gusting through rows of a captivated audience, billowing through elaborate costumes of performers on stage, whispering through microphones and swaying trees to create a moving backdrop around the iconic Double Bridge (二重橋, Nijubashi) and Imperial Palace, it must have been a sign.

Perhaps it was a sign that spring had finally arrived, that this day marked a new beginning. The third and final day of Japanese traditional performing arts in Japan Cultural Expo’s “Representation of Prayer” (祈りのかたち) was successfully staged and enthusiastically received on March 14, 2021—one decade after the 2011 Tohoku earthquake and tsunami, one year into the global pandemic, and one day after Saturday’s program was canceled by heavy rain. As humanity met nature once again on the Imperial Palace Plaza, maybe it was a sign that our collective prayers for peace, recovery, and reconstruction had been heard.

Sunday’s program opened with traditional Ryukyuan dances (琉球舞踊) that flourished in the 18th century. These vividly staged diplomatic rituals were originally developed to entertain Chinese imperial envoys (冊封使, Sapposhi) and later as part of Ryukyuan missions to the Japanese shogunate capital of Edo (present-day Tokyo) during the Ryukyu Kingdom period.

The combination dance (打組踊, uchikumi odori) Shundo (醜童, ugly child) was especially entertaining, like a cartoon story brought to life by bright costumes, relatable caricatures, and contrasting dance styles. When two ugly women (defined by their simple attire, unrefined moves, and most significantly, masks) are snubbed by two pretty women, it’s the ugly women who have the last laugh. (Also worth noting is that all the dancers are played by men.) Shundo is the only classical Ryukyu dance performed with masks.

The Ryukyuan classical musical ensemble was composed of three-stringed sanshin (三線) and the bowed stringed kucho (胡弓) (both snakeskin instruments which inspired mainland Japan’s catskin shamisen and kokyu), as well as koto (箏), flute (笛, fue) and drum (太鼓, taiko). Augmented by the choir of sanshin players’ gentle voices, the Ryukyuan ensemble created pleasing melodies and androgynous tones in flowing songs that, still today, would readily be associated with the subtropical Okinawan islands. All performed with heartfelt prayers for the safe reconstruction of Okinawa’s Shuri Castle (首里城), a world heritage gusuku site that burned down in October 2019.

There’s something exciting about seeing a live Noh performance on an outdoor Noh stage, featuring the symbolic bridgeway (橋掛かり, hashigakari) that leads past the striped curtain to the backstage mirror room—and into another realm—all surrounded by ceremonial gravel, in the open air.

For these special performances of “Representation of Prayer” in Kokyo Gaien National Garden in Tokyo, even better than Noh theater’s conventional roof and painted mirror board was the majestic live backdrop of the white Imperial Palace behind the Edo-period Double Bridge. From the bright sun to the strong breeze, as audience members, we could fancy ourselves as imperial subjects watching popular entertainment, just as people did in centuries past.

Iwafune (岩船, stone ship) was performed as a more informal maibayashi (舞囃子) Noh dance without masks, but still preserving all the precise movements characteristic of Noh drama. The dance celebrates the divine vessel as a symbol of rich trade between Japan and China during the Muromachi period (1336-1573).

It was also a chance for the non-initiated to acquaint ourselves with the minimalist ensemble of Noh musicians (囃子, hayashi) and chorus (地謡, jiutai). Together they created the entire scene with their narrative baritone chants, percussive drum beats, and punctuating cries, topped by the high-pitched curls and whistles of the nohkan (能管) flute.

Traditionally, Noh theater (能楽, nogaku) includes short kyogen (狂言) interludes for comic relief. The classic farce Kusabira (茸, mushrooms) offered a surreal distraction from the solemn themes of formal Noh drama. In it, a hapless man’s garden becomes overrun by pullulating giant mushrooms, each with its own unique appearance and personality expressed through quirky masks, costumes, and hats, all mocking the clueless incantations of the yamabushi (山伏) itinerant monk called upon to quell them. The play culminates in the Onidake (鬼茸) demon mushroom shooting out its malevolent spores in revenge!

The felicitous Noh (能) finale of all the special performances in Kokyo Gaien National Garden was Shakkyo (岩橋, stone bridge), staged by the Kanze school (観世流). Auspiciously, the Imperial Double Bridge represented the natural stone bridge at Mount Shōryōzen in China that leads to the Pure Land of Manjusri Bodhisattva. When the monk Jakusho hesitates to cross the sacred bridge, three sennin (仙人) mountain hermits chat and drink near the scene, waiting for the guardian lions to appear. It isn’t until after they finally leave that the much anticipated red and white lion spirits (獅子, shishi) emerge and dance vigorously among the red and white peonies in a splendid celebration of eternal vitality. While the Kabuki Shakkyo lion dance portrays a more lyrical human-like figure, the Noh Shakkyo shishimai (獅子舞) gives a more symbolically primitive impression, with animal-like twitches of the creatures’ feathery manes around fiercely expressive masks.

If you missed the live performances of “Representation of Prayer” at Kokyo Gaien National Garden in Tokyo, you can still watch the video streams online through March 30 (¥1,200). Not only will you be able to enjoy the outdoor performances in the comfort and convenience of your own home, but the high-quality videos also offer close-up views of the Noh stage and performers from different camera angles, so that you can appreciate every detail of the finely crafted masks, costumes, instruments and movements of Noh, Kyogen and other Japanese traditional performing arts.

Throughout 2021, Japan Cultural Expo programs continue to showcase the harmonious relationships between “Humanity and Nature in Japan”, from Ainu traditions in Hokkaido to Ryukyu performing arts in Okinawa, from the ancient Jomon civilization to contemporary trends.

Upcoming highlights include Art Fair Tokyo (March 19 – 21), the “Fashion in Japan 1945-2020” exhibition at the Iwami Art Museum in Shimane prefecture (March 20 – May 16), and the National Art Center in Tokyo (July 9 – September 6), and Japanese architect Kuma Kengo’s “Five Purr-fect Points for a New Public Space” at the Nagasaki Prefectural Art Museum (through March 28) and the National Museum of Modern Art in Tokyo (June 18 – September 26).