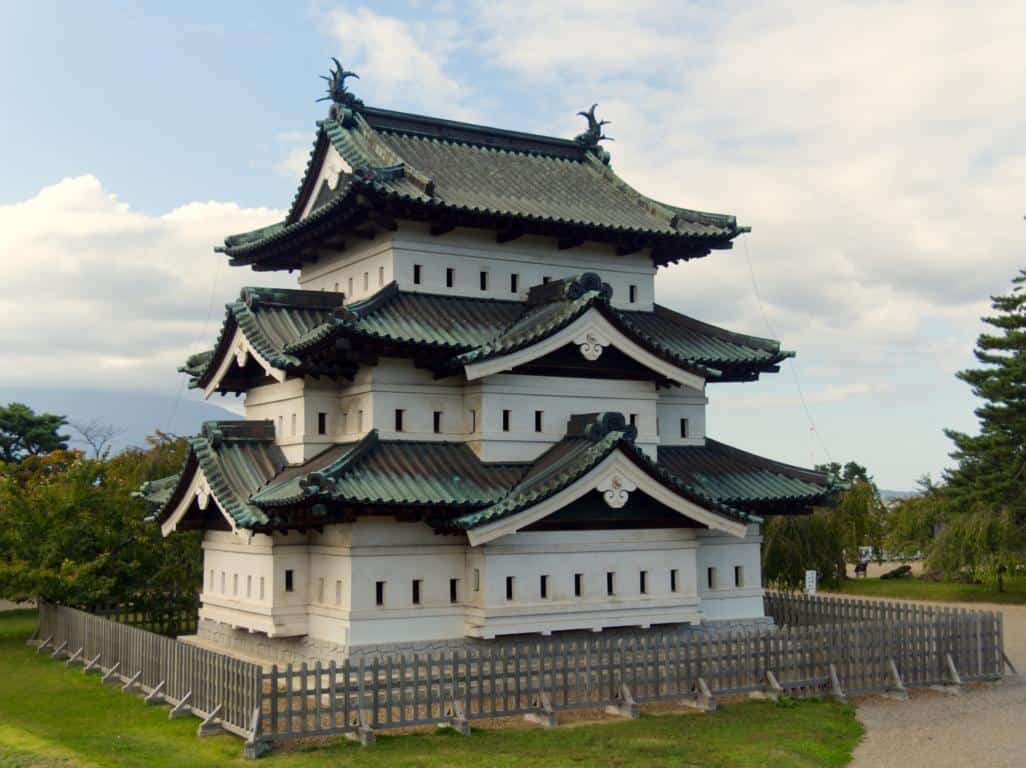 During the Edo period (1603-1868), the powerful Tsugaru clan ruled the region around present-day Hirosaki. The city still has a strong samurai heritage that visitors can experience. When I was a university student, I met quite a few Japanese exchange students from Hirosaki who told me wonderful things about the city, so Hirosaki was very high on my list of places I wanted to visit for a long time. Last autumn, I finally traveled here to find out if it is really such a great place to visit.

When I arrived at Hirosaki Station, I realized that Hirosaki (弘前) felt much smaller than I had expected. With a population of just under 170,000, it is comparatively small for Japanese standards, and you won’t find many of the enormous malls or sky-high hotel buildings as you would in many bigger cities in Japan. Personally, I like the local feeling and slower pace of smaller towns, so I felt very comfortable in Hirosaki right from the start.

The first place I visited was Hirosaki Castle (弘前城), the iconic landmark of the city. The castle is not only the most famous sightseeing spot of Hirosaki, but it is also the city’s origin. At the end of the warring states period in the late 16th century, the Tsugaru clan took control of the lands around present-day Hirosaki. After siding with Tokugawa Ieyasu, who would become the first shogun of the Tokugawa dynasty that ruled Japan for over 250 years, their holdings were reconfirmed by the shogunate, and they started the construction of Hirosaki Castle. From here, the Tsugaru clan ruled the Hirosaki domain until the abolishment of the feudal system in the 19th century.

I crossed a bridge over a moat and entered the castle grounds through the southern gate, near the Municipal Tourist Center. On my way, I passed some turrets, like the gates, walls, and the main tower, which are still original structures from the Edo period, designated as National Important Cultural Properties. Because the castles in Japan were seen as a symbol of the old feudal system, most of them were torn down and destroyed after the samurai class was abolished during the Meiji era. As a result, just a handful of original castle structures exist today, and Hirosaki Castle is one of them.

Unfortunately, not all buildings have survived to this day. Many of the castle’s original structures were deconstructed when it became a garrison for the newly formed Japanese Imperial Army at the end of the 19th century. Soon after, a public park was constructed on the castle grounds. Nowadays, this park is a popular spot among the locals, especially in spring when the people of Hirosaki flock into the park to gaze at the marvelous colors of the blooming cherry blossoms. I was mainly interested in the historical remains of the castle, so I headed straight to the castle tower.

The first castle tower was struck by lightning and destroyed in 1627. It took almost two hundred years to build a new one. Finally, the current building was completed in 1810, making it the only surviving castle tower built during the Edo period in the northeastern part of Japan. When I entered the tower, I could feel the history of the building and easily imagine how it must have been in old times when this tower was the symbol of the Tsugaru clan’s power.

How Warrior Class Used to Live in Hirosaki’s Samurai Residences

I left the park through the northern gate to explore more of Hirosaki’s samurai heritage. In the former samurai district to the castle’s north, you can visit four preserved samurai residences.

The buildings are located in a residential area and would be easy to miss if it weren’t for the signs that show you the way. The first house I visited was the former Sasamori residence. When I took off my shoes to enter the building, I was greeted by a local man who was more than happy to explain this house’s history to me. “The Sasamori was a family of middle-class samurai. In the guest room, you can see the armor that belonged to them,” he told me. Apparently, until 25 years ago, there was still someone living in this building, but then it was donated to the city and restored to open it to the public.

I also visited the three other preserved buildings. They all have different architecture and their own charm, so it is worth it seeing all of them.

The interior of the houses seem simple and unadorned in comparison to the great temples and premises of feudal lords that one usually visits when traveling Japan, but I found it extremely interesting to get an idea of how a middle-class samurai during the Edo period had lived.

Aomori (青森) is famous for its spectacular fire festivals held in different locations throughout the prefecture. Hirosaki has its own version called Neputa Matsuri, which is held every year in early August. During the festival, about 80 lantern floats are paraded through the streets. Unlike the Nebuta Matsuri (written with a “b” rather than “p” due to different local dialects) in Aomori City, famous for its colorful floats of gods, historical and mythical figures, Hirosaki’s Neputa Matsuri look like giant fans with depictions of Japanese folklore and traditional theater motifs.

If you can’t make it to the actual festival, you should visit the Neputa Mura (ねぷた村), northeast of Hirosaki Castle, a museum dedicated to the event and the local culture of the city. I entered the first building and found myself in a large space where several enormous lantern floats were exhibited. It was a breathtaking sight, and I can only imagine how it must look like when they are actually paraded through the streets of Hirosaki.

After marveling at the fantastic floats for a while and trying my hands on two large festival drums under the kind tutelage of the museum’s staff, I was lucky enough to be able to listen to a performance of a prize-winning Tsugaru-Shamisen player. You might have heard the sound of the three-stringed shamisen before, but the way this instrument is played in Aomori is unique. Instead of just strumming the strings with the bachi, a kind of large plectrum, the player strikes them with a strong movement, creating a smacking sound that makes the music feel more powerful. Further, the player’s left-hand press and pick the strings on the instrument neck down, allowing for an overall faster rhythm. I was enchanted by the masterful performance and could have listened for hours.

After the performance was over, I explored the other parts of Neputa Mura. You can observe local artisans in one building producing lacquerware, kokeshi dolls, pottery, and other products. The way then leads you through a small garden to the museum’s shop, where you can purchase local specialties. Aomori is the top producer of apples in Japan, so naturally many of the local sweets are made with apples.

If there is one thing that I love more than visiting places connected to the samurai, it would be visiting temples. There is just something about their calm and spiritual atmosphere that draws me to them. Choshoji (長勝寺) was the family temple of the Tsugaru clan and was moved to its current location to the southwest of the castle in 1610. At the same time, 32 other temples of the Soto school of Zen Buddhism were brought here to protect the castle from bad spirits. The road in which all 33 temples are located is called Zenringai (禅林街), which means “temple road,” but could also be translated as “Zen forest road” if you read the characters in a more literal way. This is a fitting name as tall trees line the street.

Although most of the temples are relatively small, I enjoyed walking down the street and comparing the various architectures that ranged from modern wooden structures to brutalist concrete buildings.

At the entrance of Choshoji stands the impressive 16-meter tall Sanmon gate, a great example of early Edo Zen architecture. When I entered the main hall, I wanted to take off my shoes and put them on the large shoe shelves next to the door, as it is common when visiting a Japanese temple. But right at that moment, a monk came out of a room in the back and friendly greeted me. “I am sorry, but the inner area of the temple is only for the community,” he told me in a kind tone. “In places like Kyoto, it is normal that many visitors come to the bigger temples, but our temple is for its temple members. If too many visitors would walk around the inner area, the community members might hesitate to come to us.”

But this didn’t mean that visitors were not welcome or that I couldn’t have a look at the main hall. The contrary was true. The monk showed me a route specially made for visitors, on which you can walk with your shoes to the inner sanctuary.

Next to the main hall is a smaller building that used to be the meditation hall. Now, it houses a Buddha statue surrounded by statues of 500 arhats, enlightened sages. The actual number is maybe closer to one hundred. Behind the building is the cemetery where several members of the once-powerful Tsugaru clan were laid to rest.

How to Get to Hirosaki

From Tokyo, take the Tohoku Shinkansen to Shin-Aomori Station. From there you can reach Hirosaki Station by local train in about half an hour. Within the city, you can take a local bus or a taxi to reach the various sights included above.

You might wonder if my visit to Hirosaki was as good as I had thought it would be after hearing so many nice things about the city. I will have to say that it was as good as I had thought. The rich samurai heritage, the exciting festival culture, the tranquil atmosphere of the temples, and of course, the provincial charm of the city are all things that make it a great place to visit. And also, maybe even most importantly, the kind people of Hirosaki that I met and who told me about the history of their city with so much passion left a lasting impression on me. 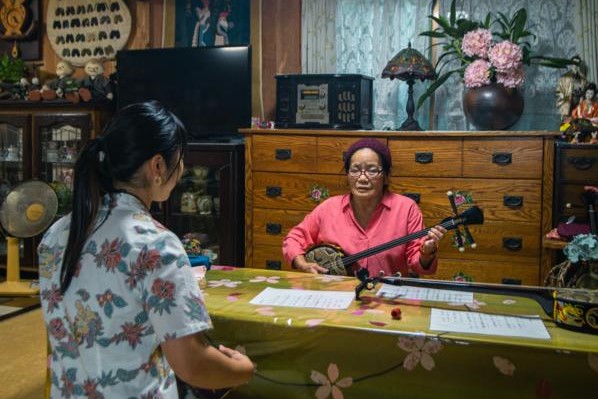