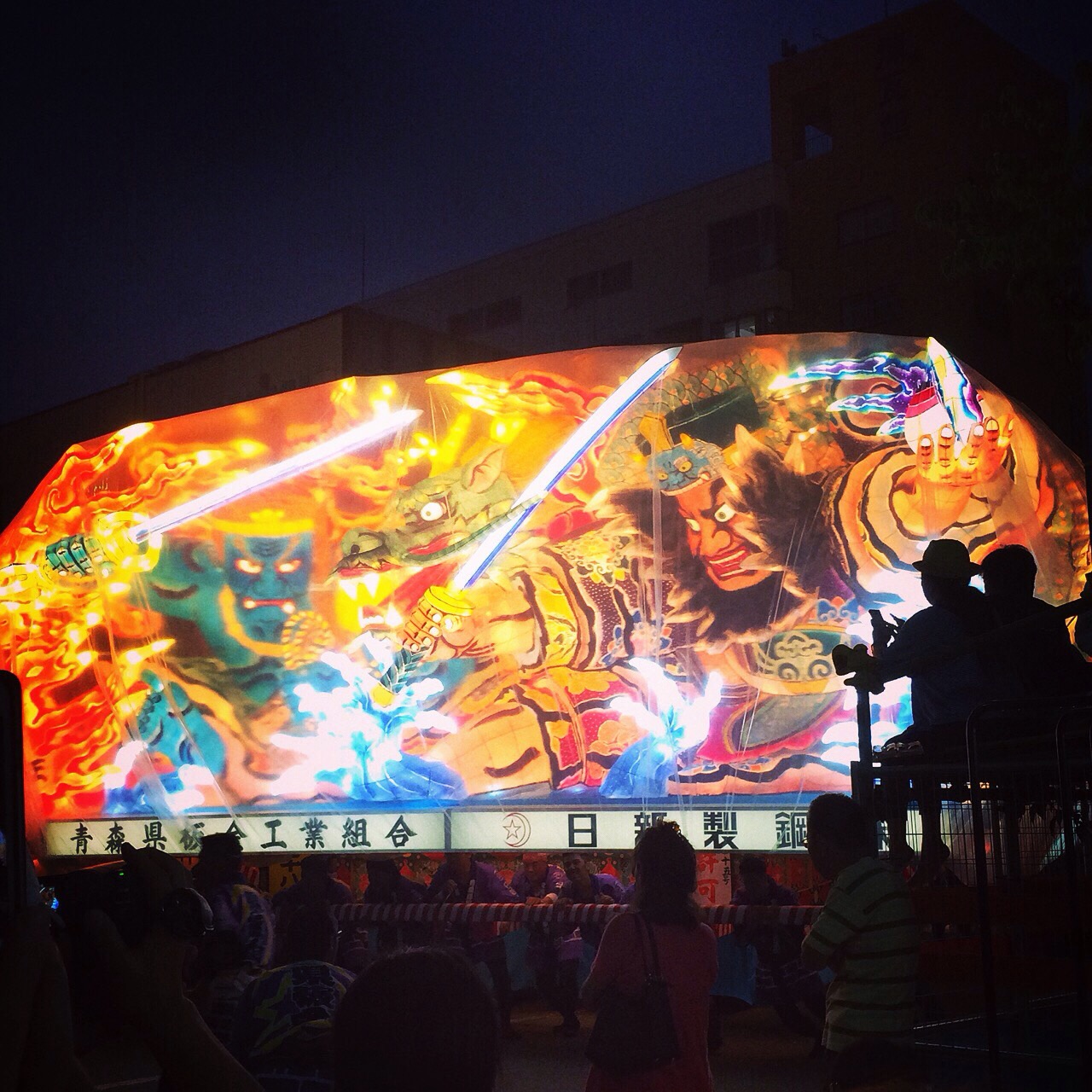 [The 2020 Nebuta Festival was canceled due to coronavirus.]

I could hear the festival coming down the street, although I could not see a thing yet through the dense crowds lining the street. “Rasera Rasera! Rase Rase Rase Ra!” Thousands of people shouting, the bells on their costumes vibrating in time with their dancing, adding a high-pitched peal to the phrase. The clamor grew louder and finally, I could see the hyashi, guiding the parade to the rhythm of their taiko drums and flutes. Followed by the first float, dipping, and dancing along the street. As it grew closer I could make out the beautifully colored images decorating the bamboo and washi paper float, depictions of samurai warriors, and animals depicted across the giant globe. The men pushing the yatai cart, spun it around, lifting it towards the crowd so the massive samurai head towered above the audience, before lowering it and pushing it to the opposite side of the street. They did it effortlessly; it seemed to be floating as they maneuvered it along the crowded road.

Unfortunately, it was meant to rain the night we went, so the floats were covered with plastic to protect them from getting wet.

Following the float came a large parade of dancers, the haneta, dressed in the traditional yukata for Nebuta Matsuri, black and white patterned cloth, with brightly colored sashes strapped over their shoulders to hold up their sleeves. Decorated with bells the costumes jingled as the haneta hopped up and down. The idea is that each bell that falls from the costume while dancing is meant to represent the shedding of bad luck.

The unique thing about Nebuta Matsuri is that anyone can join; there is no practice or preparation required, as there is for some of the other summer festivals in the Tohoku region. You simply don the clothes and join a group, chanting and hopping (twice on one foot, and then on the other), along with the rest of the revelers.

Nebuta Matsuri is one of the most popular festivals in Northern Japan and is included in Tohoku’s Sandai Matsuri ( Three Great Festivals of Tohoku). It is celebrated yearly around August 2nd through 7th, although the dates do occasionally change.  The first two days only showcase the smaller Nebuta Matsuri floats. Because of the sheer size of the larger floats, it is impractical to display them for the whole six days, and they are reserved for the last four days of the festival. The floats range in size from fifteen to thirty feet tall, although they are restricted in size due to power lines and other obstacles. They are decorated with mythical and historical figures, as well as animals, and lit up from within by hundreds of lights.

The origin of Nebuta Matsuri is uncertain, although I personally enjoy the idea that it is meant to energize the soul after the sticky summer heat, just in time for the fall harvest season. The festival is certainly infectious in its energy, and the best way to enjoy it is by participating.

Before the parade, I recommend making a stop at Nebuta Koya, the large sheds where the floats are housed during the off-season. They are located next to the ASPM Building near the city’s waterfront. Here you can see the floats up close; although they are not quite as impressive when unlit, you can see just how much work goes into the year-long process of making these gigantic works of art.