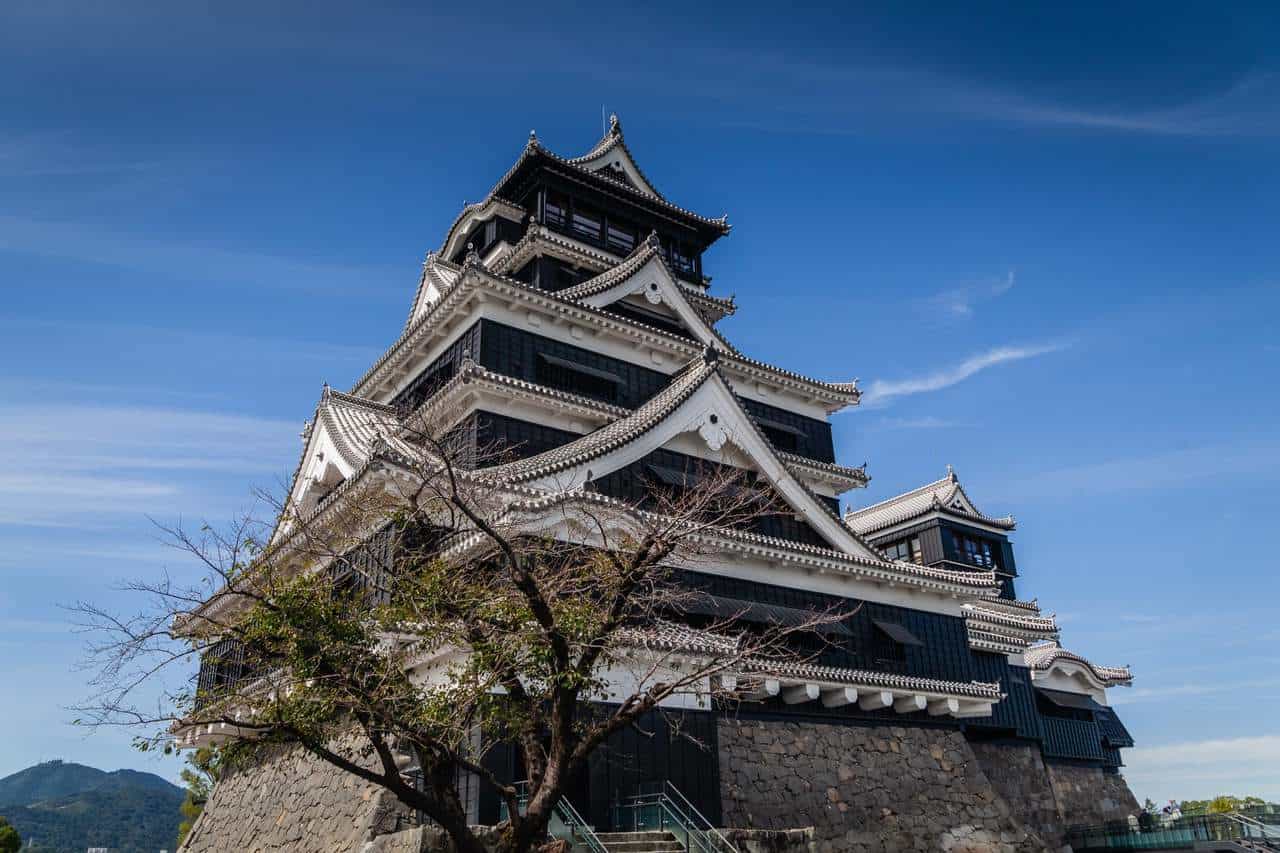 Nicknamed The Heart of Kyushu, Kumamoto city (熊本市) is the capital of its homonymous prefecture and home to one of the most impressive castles in Japan and probably, the country’s most widely known prefecture mascot in the world. This is a small chronicle of how I spent a day submerged in the city’s old history and traditions.

Kumamoto Castle, A Phoenix Risen From its Ashes

I start the day with the city’s greatest historical symbol: Kumamoto castle, one of Japan’s largest and most famous castle complexes. These past couple of months have also been a very special period for castle visitors. The summer of 2021 marked the first time in 5 years that visitors could visit the main keep again after the extensive damages sustained by the destructive earthquake in April 2016. So I feel fortunate to finally check this castle off my bucket list with the help of my knowledgeable and English-speaking guide, Mieko Okada, who explains everything there is to know about its history.

I ask my guide how much it is still original from the Edo period when the daimyo Kato Kiyomasa built it in 1607. It turns out the castle was spared from being dismantled during the Meiji era as it was deemed useful for the Japanese army. While the better part of the old citadel ended up being demolished, the main towers and their surrounding turrets and walls did remain in place. However, most of it was lost to fire during the Satsuma Rebellion, also known as Seinan War, in 1877, leaving only a few original turrets and some wall sections. Not many changes would take place during the subsequent years, and only sheer luck would prevent further destruction during the air raids of World War II. It wouldn’t be until the 1960s that the ruins would see a major overhaul, with the main keep (mostly) restored to former glory, along with several towers and large wall sections. Structural innovations included the use of reinforced concrete besides traditional wood, while the interior of the main keep became a museum.

But interestingly enough, one of the fascinating things I heard from my guide was regarding the extraordinary care of the restoration works with the stone walls. First, each stone piece is carefully documented and numbered with the help of all possible sources, and then, rebuilt sections are placed over 70 thousand stones in exactly the same order. Such painstakingly detailed efforts became critical during the aftermath of the earthquake, and rebuilding efforts have also shed light on the complex and sophisticated wall design devised by Kato Kiyomasa over 400 years ago.

At the time, these impressive walls had already been nicknamed as musha-gaeshi (武者返し), which could be loosely translated as returning warrior, given the wall’s effectivity in rebuffing uninvited visitors with less than friendly intentions. To this day, ongoing reparation work in several areas is still off-limits, with restoration work expected to last for at least another 20 years. However, this impressive complex continues to represent the city’s history and a source of inspiration to symbolize strength and resiliency.

The experience of Kumamoto’s rich history and culture through the castle walls is heightened by the opportunity of exploring the different shops and restaurants in Josaien. This small shopping center recreates the feelings of a castle town straight from the Edo era. A bustling commercial area also features a stage where different shows take place every day. One of their popular acts involves the fun troupe Kumamoto-jo Omotenashi Bushotai (Kumamoto Castle Hospitality Warlords), a group of historical reenactments that provide an educational insight into key samurai figures with a humorous flavor. Overall, it’s a perfect location to get all sorts of souvenirs for our trip and an excellent selection of restaurants where we can try different Kumamoto culinary specialties.

Horse meat is one of Kumamoto’s local specialties, and Yamami-Chaya is one of the best options to try it. I decided to get the grilled horse meat set meal. Some of their popular items also include horse sashimi or local ”Red Beef” (赤牛, Aka Ushi, also known as Japanese Brown) bowl. Set meals are priced around 2,000 yen, although more budget-friendly options are also available.

My next stop was just 20 minutes away, and right next to the beautiful Suizenji Jojuen Park (水前寺成趣園). Nothing better to match the traditional scenery than dressing for the occasion, and that’s precisely what I did, with the gracious help of the kimono masters at Wa Collection Mito. Since 1967, this rental shop has over half a century of experience in providing the best pieces for every need, from lovely seasonal kimonos for a leisure stroll, luxury pieces for special occasions, to once-in-a-lifetime events like coming of age ceremonies. In most cases, for less than 4,000 yen, you can choose a cute kimono from a wide selection and spend the day enjoying any activity until it’s time to return it before the shop closes at 17:00.

Naturally, with the city’s most famous and beautiful garden right at the end of the street, going there is a no-brainer. The Suizenji Jojuen Garden’s 350 years of history is a great setting to let your imagination run wild and envision yourself living in the Edo period, strolling and admiring the carefully crafted landscape. Takao Tsuru san, my guide in the garden, explains that the daimyo Tadatoshi Hosokawa intended to represent the Tokaido road between Tokyo and Kyoto, thus paying homage to landmarks like Mount Fuji, Lake Biwa, or Fushimi Inari Shrine. This type of garden is called Momoyama-style and its main feature is its tsukiyama, an artificial hill that’s typically surrounded by a pond.

I rounded up my garden experience with a visit to Kokindenjuno-ma (古今伝授の間) teahouse, which has built initially as part of Kyoto’s imperial palace before being moved here in 1912. At the time of construction, it was the learning quarters for prince Tomohito Hachijo, a function still remembered through the teahouse’s name, as the first part comes from Kokin Wakashu (古今和歌集), the first imperial anthology of Japanese poetry, that was taught here. The usual menu offering consists of a set of matcha with traditional sweets for about 550 yen. I was deeply grateful for enjoying such great weather while sitting atop the tatami mats and imagining what it must have been like for the lucky ones gazing at the same landscape centuries ago.

Since I was already engrossed in spending a day like in the 1600s, I figured I might as well take it to the sights beyond the gardens. While allowing myself the liberty of stepping for a moment into the 1920s for the convenience of the nearby streetcar line, I promptly go back to the Edo era the moment I enter Higo-Zogan Mitsusuke’s workshop. The master craftsman Yuji Osumi enthusiastically tells me how this unique art, which developed exclusively in Kumamoto, has had a long journey starting as decoration for armor and weapons and expanding into statement pieces in fashion or even interior design. This shop, established in 1874, has played a pivotal role in keeping this craft alive, having created pieces for the imperial family and even for international leaders—a genuine Kumamoto ambassador.

That’s why today, I also try to play a small and humble part in maintaining this centuries-old craft by learning how to decorate a small piece using this technique. Visitors may choose between a pendant, a strap, or a badge and then try their hand at their own design or pick a design with the prefecture’s famous Kumamoto castle. Keeping in line with the day’s theme, I stick with the latter, of course. With Osumi-san’s patient guidance, I manage not to make a mess, and after one hour, I feel a little proud of my small achievement of not ending up with a cubist or abstract rendition of the castle. After providing my address and contact details, the shop will give the finishing touches, and once it’s ready, will send me the finished product.

How to Get to Kumamoto

Kumamoto city is served by train and tram lines. From Fukuoka’s Hakata Station, it takes about 40 minutes on the Kyushu Shinkansen; approximately 1 hour from Kagoshima Chuo Station, and from Oita Station it takes about 3 hours by Limited Express.

At the end of the afternoon, I’m left with no choice but to return to present times. Change and evolution are still a needed natural process, but so are keeping the traits that make a place unique. It’s a happy thought to see that Kumamoto’s historical and cultural jewels remain very much alive and kicking in the 21st century.