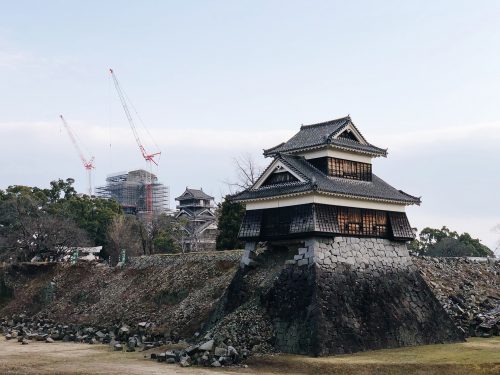 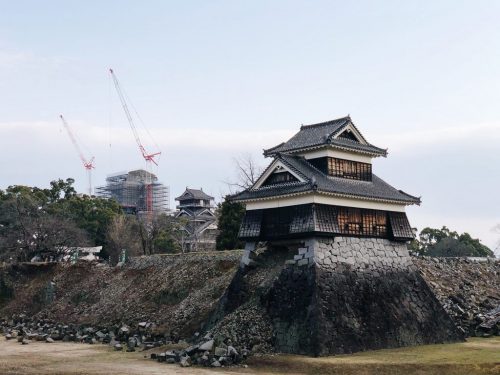 In addition to being a charming and lively city, Kumamoto has a significant historical heritage. First, despite the damage caused by major earthquakes in April 2016 that forced the city to rebuild a good part of the building, a walk in the castle park is a must during a visit to Kumamoto. 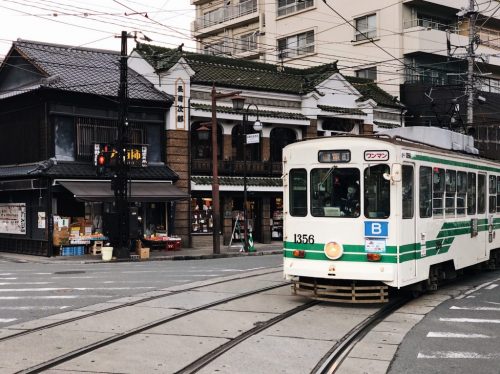 The tram that runs through the old town of Kumamoto

The old buildings architecture found at the city center reminds me of Kumamoto Castle, it’s dark colors and wooden walls all topped with traditional roof tiles. Like just about everything in Kumamoto, the castle is easily accessible as the tram makes a stop right outside its entrance; At the crossroads of Toricho and Hawabatacho streets. Several paths are available to access the park, but I decided to go around the main entrance to take the path of Nagabei, which runs along the ramparts beside the river for more than 200 meters. 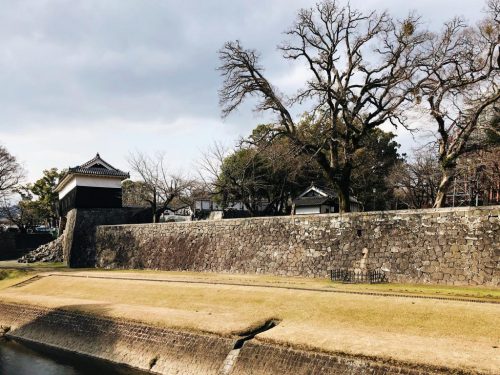 The walk along the river

Due to the omnipresence of reconstruction projects everywhere on the site, the Nagabei path is unfortunately closed to the public at the moment (As of March, 2018.) So I decide to walk along the river just on the other side to admire the massive stone wall that surrounds the castle. In spring, the green landscape and flowery trees contrast with the ramparts, making the way an ideal location for beautiful photos, but also for a romantic walk, or even a picnic at the edge of river. 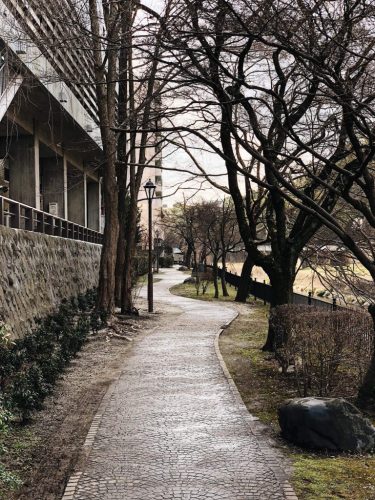 The path, on the other side of the river 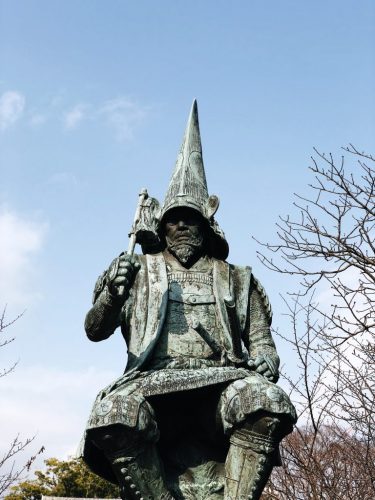 The status of Kato Kiyomasa, samurai of the Sengoku Period

Once at the end of the road, I come across a statue of Kato Kiyomasa, a former Japanese warrior and feudal governor (in Japanese “daimyo”) but also founder of the castle in 1588; this statue is located at the end of the road. Afterward, I cross the bridge on my right to reach the official entrance of the palace.

I am pleasantly surprised to see that behind the main rampart of the castle is a very small village filled with local shops and restaurants. Charming, this space is named Josaien and is made up of a handful of streets on which one can create memories, but where it is also possible to taste a small snack before beginning your exploration. On the other hand, Josaien also serves as a gathering place for entertainers, who congrigate in the middle of the public square. I also saw a cat wearing a samurai costume with a cap of Kumamon, the official mascot created by the prefecture of the Kumamoto in 2010, that is hard to miss if you are in the area! 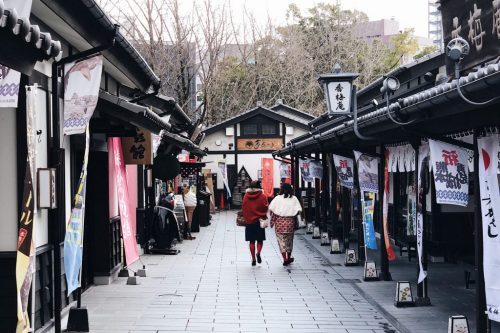 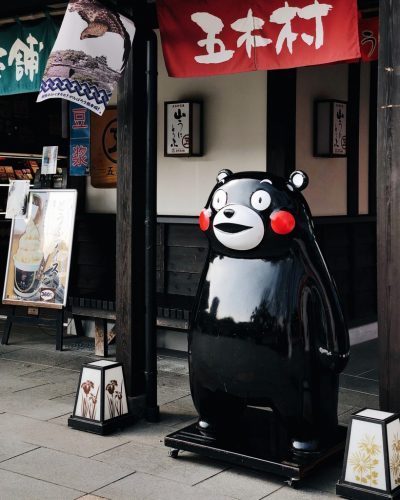 Kumamon, the official mascot of the Kumamoto Prefecture 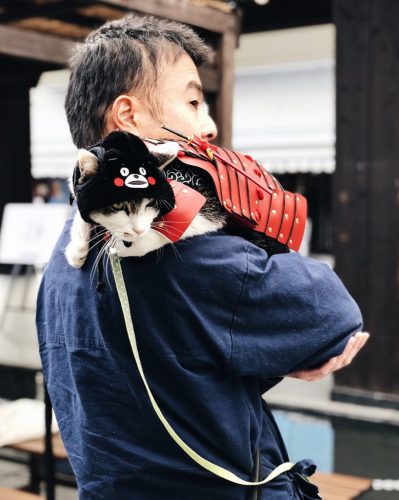 A cat wearing a samurai costume!

Before starting my walk, I make sure to go around all the streets. Everything is so charming and warm that Josaien would almost disguise the fact that this is a castle town! I use this little break to enjoy delicious ice cream covered strawberry pieces, before heading to the park. 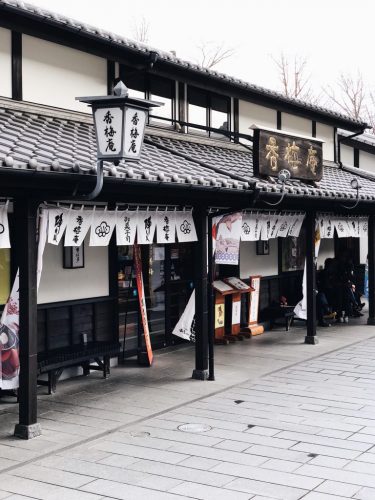 A reproduction of the traditional Japanese style, in Josaien

Since reconstruction is widespread in the park, a path is currently imposed for the safety of visitors. The damage caused by the earthquake, which resulted in landslides of stones around the castle, makes it dangerous to explore certain areas of the castle grounds. 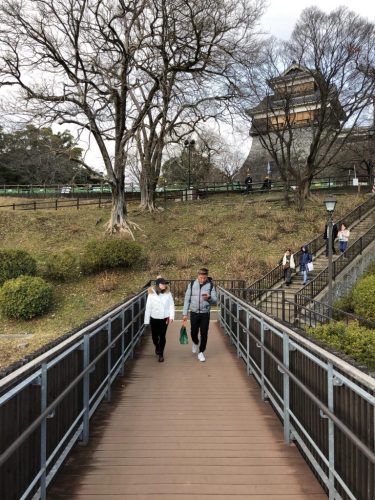 Entrance into the park

Before this natural tragedy occurred, Kumamoto Castle was considered one of the three most beautiful castles in Japan. Large and extremely fortified, it was renovated in the 60’s, although the majority of its wooden structure was kept as is. Nevertheless, this walk allowed me to see different external structures of the castle, relatively spared by the earthquake. 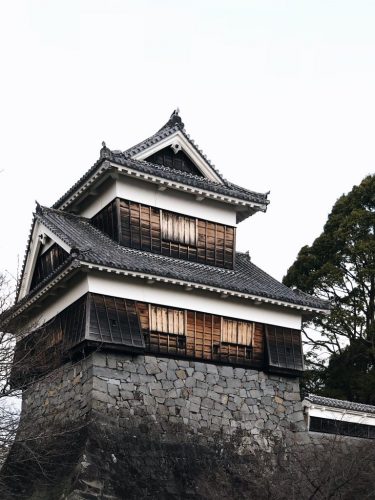 A tower of the castle, at the corner of a rampart

As I quietly approach the main castle, I arrive at the vast expanse of Ninomaru Square. It is a flat terrain at the top of a hill, where I imagine the Kumamoto locals come and relax on hot summer days. I even see a couple of friends playing catch next to a tree. From the square, I also see clearly the castle, and some elements of the city, in the background. 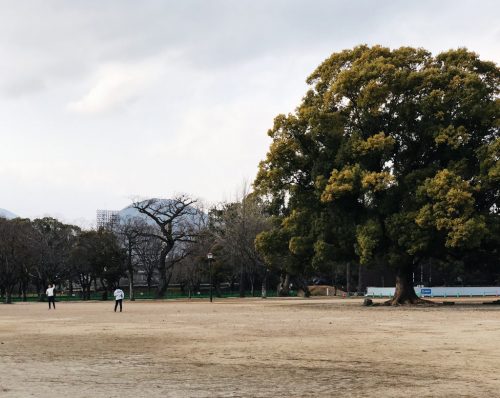 The History of Kumamoto Castle

The history of the castle dates back to 1467, when its fortifications began at the top of the hill of the city. Built first by Ideta Hidenobu, it was later upgraded by Kanokogi Chikakazu, and eventually significantly expanded by Kato Kiyomasa. Despite the sieges that the castle may have suffered in the past, thirteen of the buildings of the ensemble have been preserved today and designated as “important cultural property”. 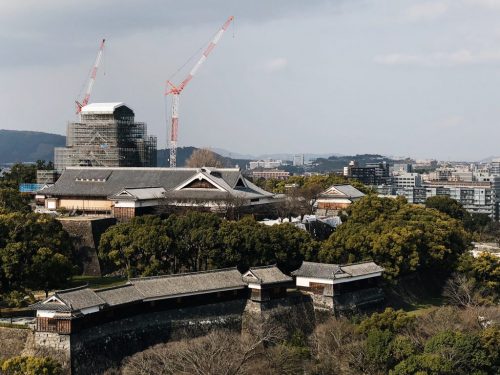 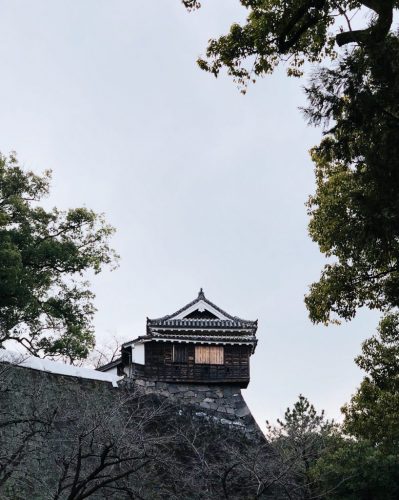 One of the rooms of the castle, still intact 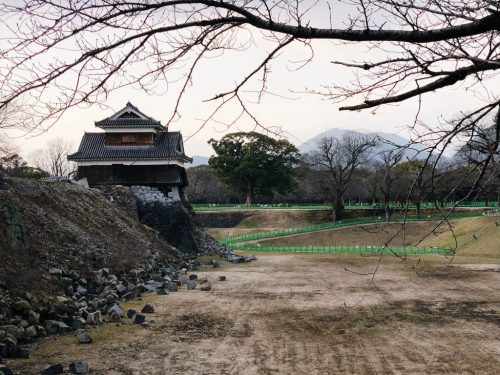 The stone walls collapsed due to the earthquake

Arriving in front of the castle, I can see the consequences of the earthquake, with the collapse of stone walls around the main castle. Despite the layer of scaffolding that encloses the main building, it’s hard not to be impressed by its imposing size. Having celebrated its four-hundredth anniversary in 2007, the castle may take some time to rebuild, but its experience and history will continue to shine.

Before leaving the castle park, I make a final stop at Kato Shrine, just next to the main castle. It is here that Kato Kiyomasa is enshrined. If you are here in spring or summer, several festivals are held in honor of the deceased. 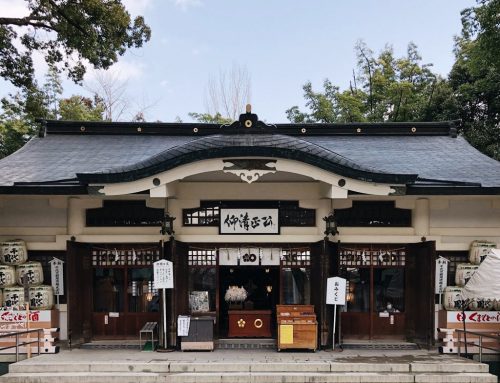 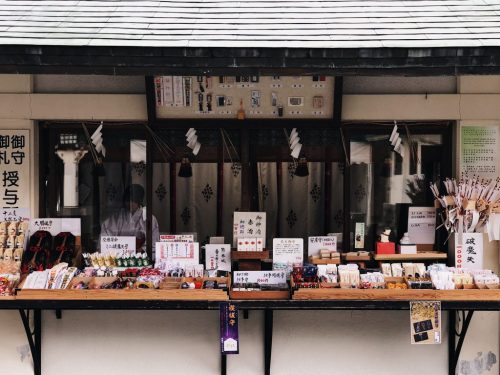 The souvenir shop, next to Kato Shrine