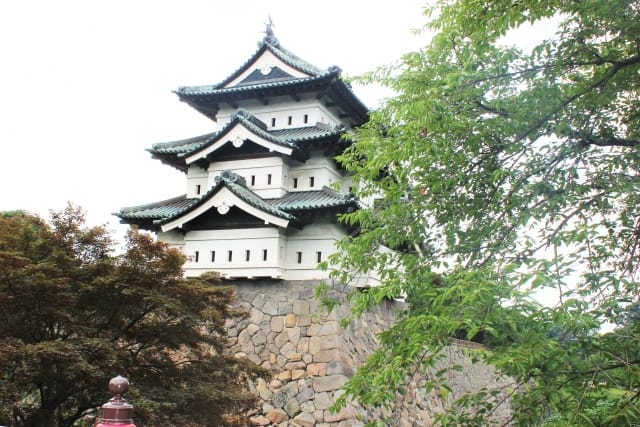 [The 2020 sakura festival was cancelled due to coronavirus.]

“I wanted something different,” my friend, Lester replied when asked why he decided to live in Hirosaki, “It has a traditional feel, a lot of old timers.” Hirosaki lies in the northern region of Japan, Tohoku, in the Aomori prefecture. Tohoku in general is known for maintaining its traditional feel, but Hirosaki is famous because it is a castle town, one that still has its castle, Hirosaki-jo. 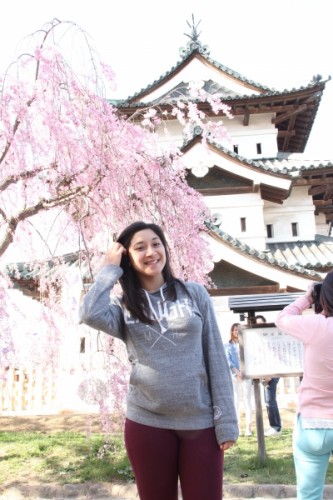 Me in front of the castle

The town of Hirosaki has a population of about 170,000 people, yet tourists from all over will still make the trip to this small town in order to see the sights. “It’s all about the park,” my friend stated while holding his ticket to the castle park that he had purchased 8 years ago. The castle is the most famous part of Hirosaki for its unforgettable views of sakura and even the autumn leaves with Mt. Iwaki set in the background. The castle is surrounded by three moats as well as several trees which make for a great hanami in spring. 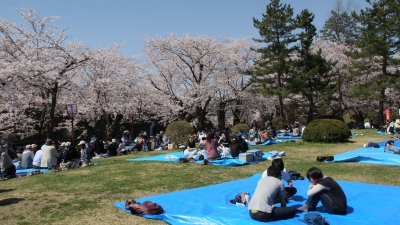 The castle is smaller than one would think. It’s only a 3 story pagoda now because it originally was 5 stories but it was burnt down from being struck by lightning in 1627. But what it lacks in building size, it makes up for in park size. One can walk around enjoying the natural scenery that surrounds the castle at any time of the year: snow on the castle in winter, pink sakura in bloom then sakura petals covering the moats in spring, green leaves in summer, and the autumn leaves in fall. Visitors can take pictures of all the different scenery as well as lounge around in the grass and even enjoy some food from the stands that are set up around the park. 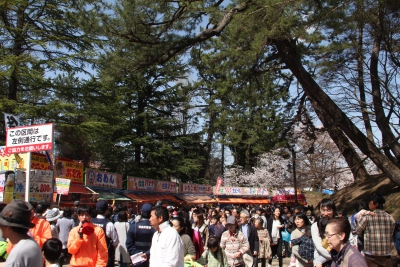 Visitors can also enjoy some time in a rowboat in one of the moats where they can see views of the castle and the trees surrounding it. 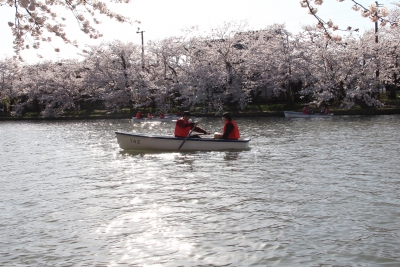 Boats in the moat

The park isn’t just good for the daytime though. At night, lights are set up to illuminate the castle so that one can see it glow in the night above the moats. 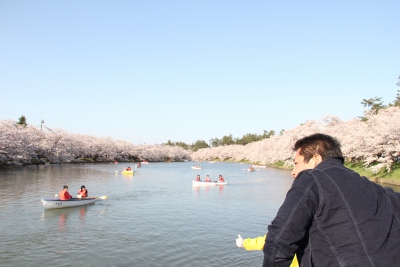 When searching for traditional Japan, Hirosaki is a popular choice for travelers. When I had visited it myself, I saw local Japanese as well as foreigners from different countries also enjoying the scenery. The views provide you with that feeling of reminding one that Japan is full of gorgeous nature scenery and not just a lit up city like the streets of Tokyo. I asked Lester what the best part of living in Hirosaki was and it didn’t take long for him to answer, “I would say the people, it’s a really peaceful place.” With the castle park standing above the town with Mt. Iwaki in the background, it’s no wonder the people there would be nice and the scenery peaceful.

Because Hirosaki is so small, the castle park is very easy to get to. Simply hop on the shinkansen and transfer at Shin-Aomori station to Hirosaki station. Then it’s only about a short 20 minute walk from there.

If you’re looking to escape the city life, Hirosaki should be your first choice as it can provide you with that traditional feel of Japan.