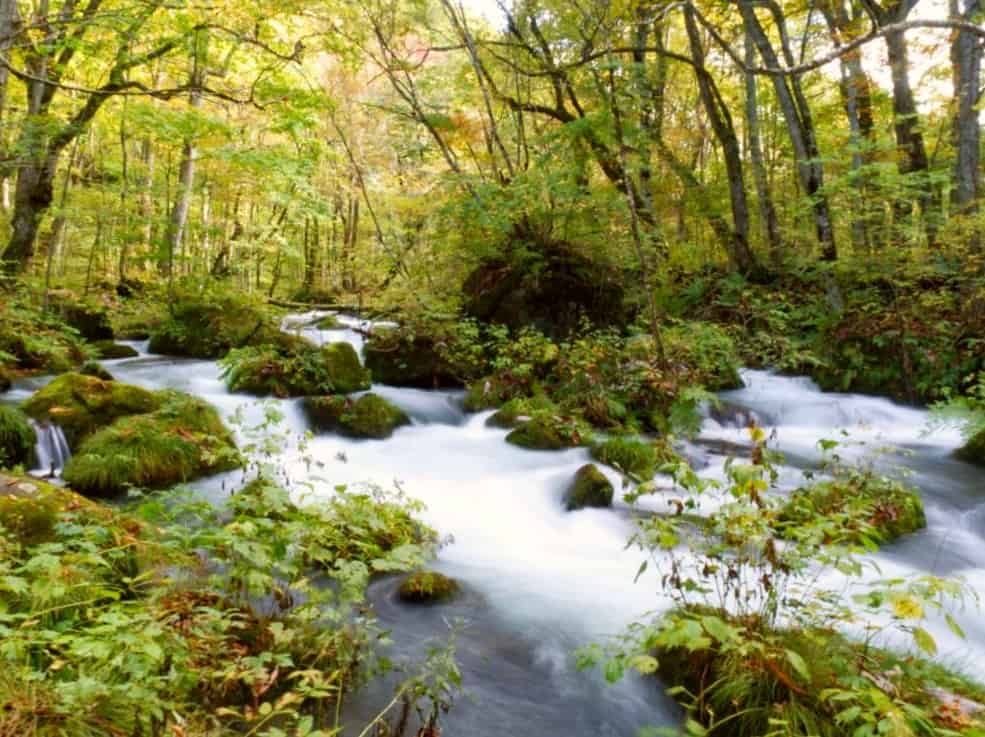 Aomori (青森) is well known for its gorgeous natural scenery. Being located at the northernmost tip of Japan’s main island Honshu, the prefecture is also one of the first places in Japan to develop autumn colors. In mid-October, I traveled to the Towada area in the hopes of seeing Aomori’s famous autumn foliage, although it was still a tad too early. I can already tell you my visit didn’t play out exactly as planned, but I gained a new insight at the end of my journey.

When I lived in Germany, summer was easily my favorite season of the year. I would often sit outside until late and enjoy the warmth of the setting sun. But after coming to Japan, I fell in love with autumn, the season usually associated with cold winds and rainy weather in my home country. Autumn in Japan, on the other hand, with its mild temperatures and mostly sunny weather, is the perfect time to travel. And, of course, the changing colors, which are celebrated in Japanese culture for good reason, are just as marvelous as you could imagine.

My first goal in Aomori was Mt. Hakkoda (八甲田山), about 20 km to the north of Lake Towada (十和田湖). It is famous for being a fantastic place to enjoy the early autumn foliage. The weather forecast on the morning of that day didn’t look very promising though, and indeed, it was drizzling a bit on my way to Mt. Hakkoda. Fortunately, it stopped just before I arrived at the lower station of Hakkoda Ropeway.

I soon found myself waiting in line to take the ropeway to the top of Tamoyatsudake, one of several peaks that make up Mt. Hakkoda, surrounded by joyful, mostly elderly, Japanese, whose extensive hiking gear left no doubt that they would not leave anything to chance. Another token of Japan’s admirable inclination towards perfectionism.

The ride to the top took about 10 minutes. With every meter, the colors of the trees below us became brighter and more colorful until we were above a fiery sea of autumn foliage.

This fantastic sight lasted just a few minutes because the gondola soon entered a thick cloud. Unfortunately, the top of Tamoyatsudake was also shrouded in a dense fog, which obstructed the view, but it gave the whole area a mystical atmosphere that made up for it.

From the observatory on the roof of the ropeway station, I was able to see through the clouds the Kenashitai marshlands that can be reached in about an hour on a circular hiking trail.

I didn’t have enough time to do the full hike on that day, but this is highly recommended for everyone who enjoys walking in nature.

The next place I wanted to visit was Tsutanuma (蔦沼), the largest of seven swamps of the Tsuta forest famous as a photo spot in autumn. The drive from Mt. Hakkoda to Tsutanuma itself turned out to be a highlight. The road leads through a thick beech forest with the branches of the trees hanging over the street. The sunlight shone on the yellow leaves, creating a golden tunnel. The colors were simply breathtaking.

I arrived at Tsuta Onsen, where I had lunch. I opted for Barayakidon, one of the local specialties. It consists of a bowl of rice, topped with slices of beef and onions cooked on a hot plate with a sweet and spicy soy-based sauce. Delicious!

From Tsuta Onsen, a wooden boardwalk leads into the primordial forest and to the shore of Tsutanuma in an easy few minutes walk. If you’re up for some more hiking, you can follow the 2.8-kilometer trail that leads you to the other five swamps.

The thick forest looked like it came right out of a Grimm’s fairy tale that I read when I was a child.

The trees around Tsutanuma were still mostly green, but the serene atmosphere in the middle of the forest and the beautiful reflection of the trees on the water’s calm surface were more than enough to make this visit worthwhile.

The Natural Beauty of Oirase Gorge

My next goal was Oirase Gorge (奥入瀬渓流), a picturesque river valley that runs 14 km between Lake Towada and Yakeyama at the foot of Mt. Hakkoda. I decided to walk from Ishigedo (石ヶ戸), a resting area at the center of Oirase Gorge to Ashura no Nagare (阿修羅の流れ), one of the most popular view spots in the valley.

I followed the crystal-clear river upstream as it gently flowed through the peaceful forest. Along the way, I came across several tossing rapids, beautiful waterfalls, and unique rock formations that provided some variety and added to its natural beauty.

The yellow and red colors of the fallen leaves speckled the green of the overgrown stones in the river, creating a spectacle of colors.

As I reached Ashura no Nagare, the late afternoon sun broke through the leaves of the trees making the scenery even more vivid. I could have spent hours just gazing at this stunning landscape, but I wanted to reach Lake Towada before sundown.

Strolling Along the Shores of Lake Towada to Towada Shrine

From Oirase Gorge, I headed to Yasumiya (休屋) on the southern side of Lake Towada, where I also stayed for the night. I strolled along the shores of the lake on a sandy beach as the sun went down.

I passed a cute little cafe that was already closed as the setting sun shone through its window and had a look at the piers, from which you can board sightseeing boats, which you can ride during the day for fantastic views of the lake.

After a while, I arrived at Towada Shrine (十和田神社), which is located on one of the two large peninsulas that extend far into the lake. From the stone torii gate at the entrance, a path leads through a thick forest to the main hall, in which the spirit of the semi-legendary prince Yamato Takeru is enshrined. It is believed that until the enforced separation of Shinto and Buddhism at the end of the 19th century, people worshipped the divine manifestation of Buddha in the form of a water dragon. One story goes that the great general Sakanoue no Tamuramaro built the shrine in the 9th century so that the water god would allow him to safely cross the rough waters of the lake on a raft.

As I sat in front of the wooden hall nestled into the lush green forest with nobody around, I couldn’t help but feel moved by Towada’s mystical atmosphere. Living and traveling in Japan for quite a few years now, I have visited my fair share of shrines, but there was just something about this shrine that made me feel a deep connection with the nature around me.

It was easy to imagine how the people of ancient times felt the need to build such a place to worship the raw, untamed forces of nature, next to which we humans look so tiny, even to this day.

I bowed and clapped my hands, as it is customary when worshipping at a shrine, and was thankful for the fine weather, even with the light rain, and that I was able to see Aomori’s beautiful autumn foliage, although it was still a bit early at some places to see it in full effect.

The following day, I made my way to Hachinohe Station to take the Shinkansen bullet train home, but not before stopping at Towada Art Center on my way before leaving. The Towada Art Center is located in Towada City, in between Lake Towada and Hachinohe City. Its permanent exhibition features art pieces of acclaimed international artists, such as Ron Mueck, Choi Jeong Hwa, and Yoko Ono.

Most of the artworks are exhibited in individual rooms that were specifically designed for them. But not everything is presented too obviously. Part of the fun is to walk around and discover the art in places you wouldn’t have expected, like the many small pieces by Mitsuhiro Yamagiwa scattered in various spaces throughout the museum.

After this cultural highlight, I finally made my way to Hachinohe City. Before heading to the station, I made a brief stop at the Hasshoku Center (八食センター) for lunch. The Hasshoku Center is a large indoor market where you can find a wide variety of fresh seafood straight from the port of Hachinohe. Here you can mingle with the locals as they shop for their groceries or eat at one of several restaurants. The fishmongers loudly yelled “irasshaimase” to bring customers to their stall.

People were sitting in one of several resting areas to eat their sushi lunch boxes or entered the self-service restaurant, where you can directly grill the fish that you just purchased at one of the many shops. The lively atmosphere of the market was a refreshing contrast to the peaceful forests of Towada.

How to Get Around in Towada

From Tokyo, you can take the Tohoku Shinkansen to Shin-Aomori. Take the local train to Aomori Station, from where you can take a JR Bus to Yasumiya, stopping off at Hakkoda Ropeway, Tsuta Onsen, and Ishigedo (this service is only available in summer). From Yasumiya, take another JR Bus to Hachinohe Station that also stops at Towada City Contemporary Art Museum. From Hachinohe Station, you can take the Shinkansen back to Tokyo. If you have a JR Pass, you can use it for the whole roundtrip.

When I sat on the train on my way home, I thought about my trip. I went to Aomori to see its famous autumn colors. Did everything go as planned? No. But was it still a great trip? Absolutely yes! Sometimes it is the unexpected things that end up becoming delightful surprises that make a trip special, and my visit to Towada is no exception.