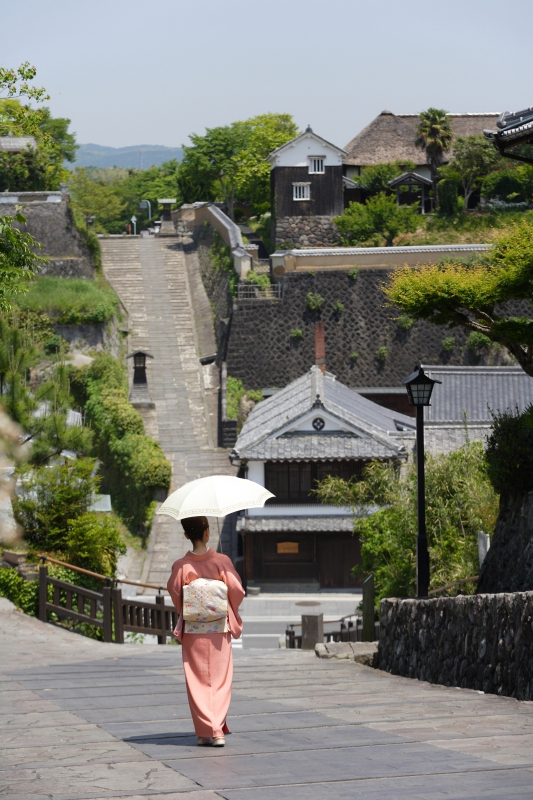 Stroll Through Kitsuki, an Ancient Samurai City in Oita

Kitsuki (杵 築) is a small fortified town in Oita Prefecture, Kyushu Island. If Beppu, about twenty kilometers away, attracts a good part of the tourists for its thermal springs, the peaceful Kitsuki allows for an immersion in the Japan of the Edo period(1603-1868). Its bukeyashiki (武 家 屋 敷), a well-preserved area of ​​ancient samurai mansions, is worth visiting if you are in the area.

The Ancient Center of the Kunisaki Peninsula

The Otomo clan established itself on the territory of the present Kitsuki during the Kamakura Period (1192-1336), adopting a new family name, transcribed “Kizuki” or “Kitsuki”, which gave its name to the city. Then it was the fourth daimyo (lord), Kitsuki, who would be at the origin of the construction of the castle in the fourteenth century.

During the Edo Period, the city was the political and economic center of the Kunisaki Peninsula. The current castle was constructed using concrete in the 1970’s, and has no major historical interest. We can, however, see its beautiful reconstructed silhouette which is one of the smallest in Japan. The location also offers remarkable views of the surrounding landscape.

The Fortified City “in Sandwich”

The samurai lived on the highest ground in the north (kita dai) and south (minami dai) of the city, and on both sides of the castle, while the lower segments were occupied by the merchants. This unusual topography is the reason why Kitsuki received the amazing nickname of “walled fortified city”.

Several old samurai houses are open to visitors for free or for a small fee (between 100 and 300 Yen).

Suya no saka, literally meaning the “vinegar slope” – dating back to the Edo Period when it was lined with vinegar stalls – connects the shopping district with the kita dai samurai residences. This location is immensely cinematic and has served as a backdrop for many historical films and soap operas taking place in feudal Japan.

To make your trip perfect it is possible to explore the city in traditional Japanese clothing,  which you can rent it at the Warakuan shop.

You can choose your favorite outfit from a wide selection of kimono, yukata, obi and accessories, then be fully dressed for 3000 yen (reservations are needed in advance, and can be made the same day over the phone). In addition, a fee reduction or even free admission to certain samurai houses, and benefits in other tourist places are granted to anyone wearing a kimono.

The Hitotsumatsu Residence, completed in 1929, combines elements of traditional Japanese architecture and Western architecture. It used to be the home of Sadayoshi Hitotsumatsu, a member of the Japanese National Parliament after the Second World War and Minister of State. With a lovely garden, it offers a beautiful view of the castle and the city. Open to visit from 9 am to 5 pm, for 100 yen.

How to Get to Kitsuki?

Kitsuki is halfway between Beppu and Oita Airport.

The Kitsuki Station is about five kilometers from the city center (about ten minutes by taxi or bus).