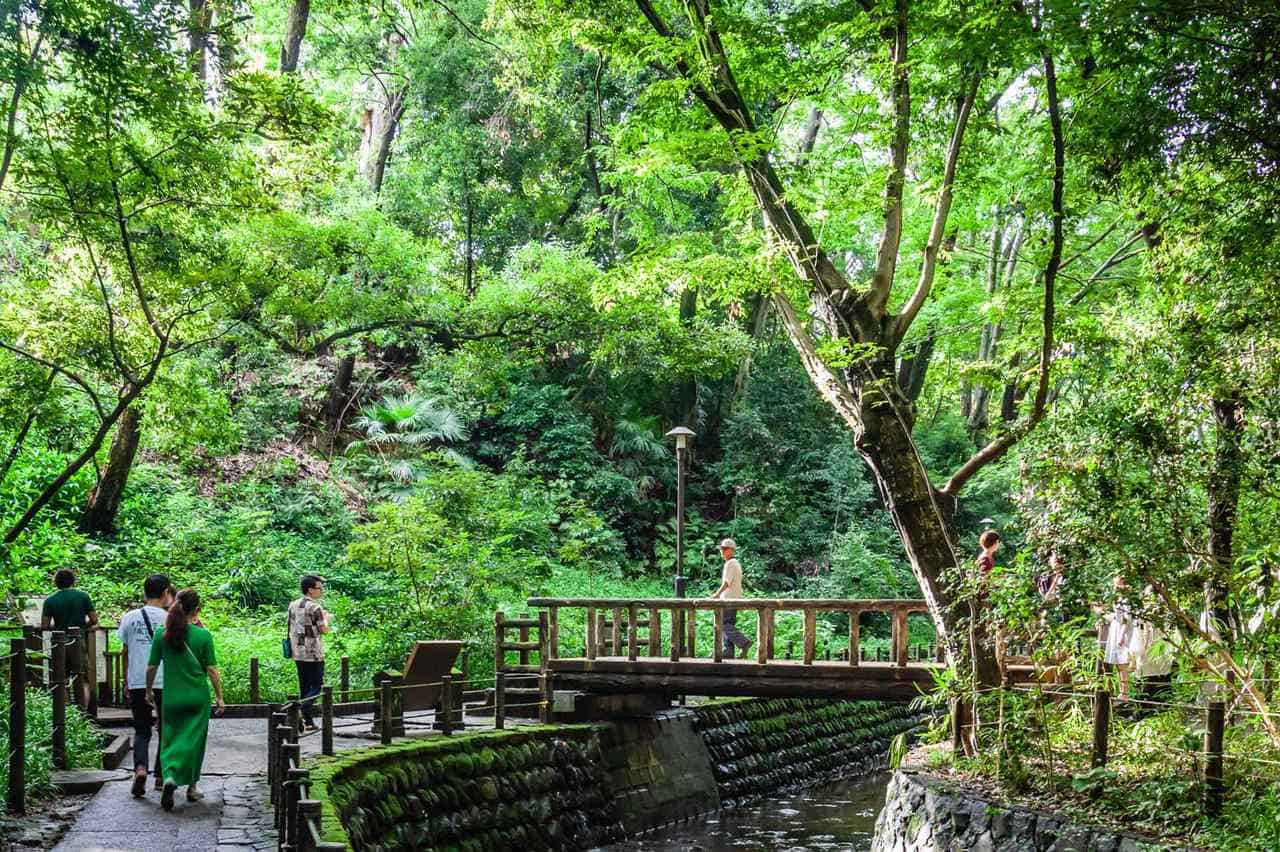 Legend has it that a deity appeared in a dream to a pious Buddhist monk to show him a sacred valley, blessed by an abundant stream of water — a mythical place where the protective deity was destined to be consecrated. When the monk discovered Todoroki Valley, he knew immediately that he had found the little mystical paradise of his dreams.

Far from the usually careful styling found on Japanese parks and gardens, the Todoroki Valley (等々力渓谷, Todoroki keikoku) is a unique space where we can immerse ourselves in a genuine oasis without venturing out of the city.

Contrary to popular belief abroad, the great Tokyo metropolis is filled with plenty of greenery, some of it lush enough to convince us we’re somewhere far away. But the existence of an authentic valley is what sets Todoroki apart as a unique attraction in Tokyo. A walk stretches for approximately 1 km following the course of Yazawa River (谷沢川, Yazawa-gawa), one of the tributaries of the Tama River. It’s a narrow valley due to fluvial erosion, where visitors have to descend several meters in order to access. This not only aids to create an enveloping and insulating sensation but also favors a humid and cooler microclimate since there’s usually around 3 degrees of difference concerning the surface. This is why the Todoroki Valley is an excursion particularly popular with Tokyoites during the hottest times of the year.

In Todoroki Valley, you can enjoy the beauty of the four seasons, but it’s in summer when the vegetation is at its peak. The shade of the trees and the refreshing environment make it an ideal destination to spend a summer day outdoors.

Todoroki is located in the southern end of Setagaya (世田谷区, Setagaya-ku, one of the 23 special municipalities of Tokyo), almost on the border with Kanagawa Prefecture. Its proximity to Tama River (多摩川, Tama-gawa), one of the most important rivers in the area, is a good complement to an outing, which is just 30 minutes from the most central areas of Tokyo, and full of natural charm, wildlife, and important elements about history, religion, and local culture.

What can you see and do in Todoroki Valley?

Discovering Todoroki Valley encompasses much more than just walking along the river, although it’s a perfectly valid option if the aim is to simply spend some time relaxing and disconnecting between the singing of the birds, the water flow, and the rustling leaves on the trees. But to make the most of all there is to offer, these are its highlights:

Tombs from the Kofun period

Officially designated as a place of historical interest, history and architecture aficionados will find a well-preserved sample of yokoana tombs (横 穴, tunnel tomb), a specific denomination of a type of tomb common in the Kofun period (between the 2nd and 7th centuries), built on the slope of the valley. The complex, discovered in an excavation in 1973, consists of six yokoana, of which number 3 (三号 横 穴 sangou yokoana) is the best-preserved one. The tombs are estimated to have been built between the late Kofun and the early Nara period (late 7th to early 8th century) and correspond to influential farmers in the Noge region, since ceramics and jewelry from the Kosai region of Shizuoka, as well as Nara ceramics from the time when Nara was the imperial capital, have been found at the site.

A Monument to Kobo Daishi, the Founder of Shingon School of Buddhism

A small pavilion called Chigo Daishi-do (椎児大師堂) pays tribute with a statue dedicated to Kobo Daishi, one of the most important historical figures of Buddhism in Japan and the protagonist of the legend that provides religious meaning to this valley through a prophetic dream. Kobo Daishi was the founder of the Shingon school of Buddhism, one of the most widespread currents of esoteric Buddhism in this country. This is a special tribute since the teacher is represented in his infantile figure; Chigo Daishi was the name by which he was known in his youth when he was a student. The purpose is to honor spiritual elevation through studies while inspiring younger visitors with a relatable image.

Everything is covered by moss thanks to the constant flow of water over the rocks and the mountain wall. It’s said that the waterfall sound inspired the valley name, from the verb todoroku (轟く), which means “to roar, rumble or resonate,” as the waterfall used to carry a greater flow. Fudou no Taki (不動の滝) or Fudou Waterfall, owes its name to Fudō Myō-ō (不動明王), one of the most prominent deities in esoteric Buddhism. This is the deity that had appeared to Kobo Daishi in his dreams to tell him about this place. When Daishi reached the valley, he recognized the same place he had seen in his dreams and when he touched the surface with his staff, water began to flow from this point. Hence the name of the waterfall, like the temple that was also founded here, Todoroki Fudouson (等々力不動尊).

Attentive readers are probably wondering how the kanji 轟 ended up turning into 等々力 for Todoroki. Sometimes, due to the complex history of kanji in Japan, there are names whose kanji has varied throughout history or cases in which a kanji is simply chosen to maintain the phonetics of the name without necessarily having much relation to the meaning of the kanji. But in the specific case of Todoroki, the symbolism is relevant and has to do with the popular legend that gives its name to the waterfall and the temple. (等) can mean quality, equality, or continuity, while (力) means strength or power. It’s impossible to make an accurate translation of the name of the temple, but the underlying idea is about maintaining or extending the strength and protection of Fudō-myōō to the area.

As previously explained, Fudo-myoo is the deity who inspires, and to whom is consecrated, the Buddhist temple Todoroki Fudoson (等々力不動尊), which was founded in the late Heian period (794-1192) by followers of Kobo Daishi and the Shingon School of Buddhism. The main pavilion dates from the Edo period.

Snow. Moon. Flower. Setsugekka (雪月花) is a frequent poetic device in Japanese art and design inspired by the natural beauty of the seasons. It’s more than an adequate name for this small tea house, a must on our visit to Todoroki. A cozy corner where we can rest from the walk and sit for a while to contemplate the views from its windows, relax listening to the soft murmur of the Yazawa River and taste traditional Japanese sweets such as anmitsu or a refreshing kakigori.

During the spring, summer, and autumn, Setsugekka is open every day from 11:00 to 16:00 except on rainy days, so it’s advisable to keep an eye on the weather forecast. In winter, it only opens on weekends and national holidays.

At the southern end, we finish the tour in front of the temple on the other side of the Yazawa River. Here is a pleasant Japanese garden called Nihon Teien (日本庭園), which serves as a small and refined landscape counterpoint to Todoroki Valley’s uncontrolled allure. The garden surrounds a small shoin where visitors can obtain cultural information about the area and sit for a while to contemplate the landscape while sipping a cup of tea free of charge. Next to the shoin is a small plain ideal for picnics. The garden opens from 9:00 to 17:00 from March to October and until 16:30 from November to February.

How to get to the Todoroki valley?

Discovering the Todoroki Valley in Tokyo is an option of great interest when looking for accessible excursions from the areas most central of the city. It’s a natural oasis where we can see a different face from the usual one in the tourist guides of the Japanese capital. At the same time, it’s an opportunity to come into contact with monuments of great cultural and historical interest.