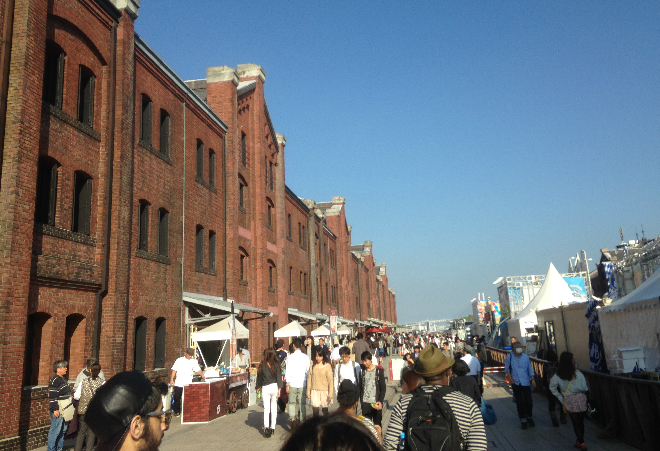 The Yokohama Red Brick Warehouse has a history reaching back to over slightly more than a century ago. Completed in 1905, the buildings stills stands today, still used, but not as a warehouse. Instead, it’s a complex that hosts a shopping mall, various restaurants, and event venues.

Both shopping and cultural events can be enjoyed between the two separate buildings. The first, shorter building is generally used a cultural facility, hosting anything from art exhibitions to plays. The second building contains many a store among its first and second floors, while food or snacks can be found throughout all three floors. From the second floor, one can go out onto the balcony for an enjoyable view over the nearby park and harbor. In between the two buildings is an area often used for special events. Some of these include a Christmas market with a skating rink, and Yokohama’s own Oktoberfest. 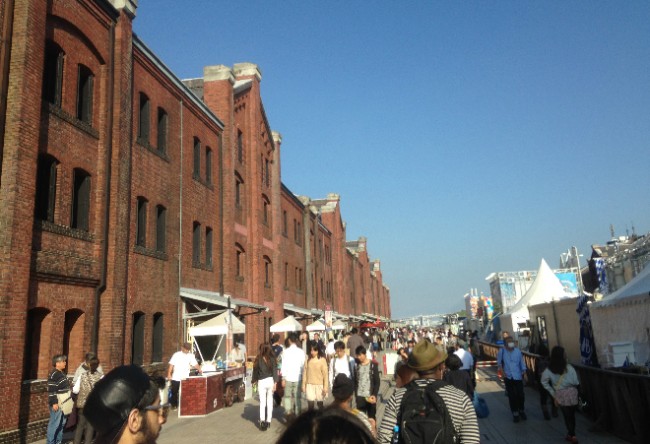 One thing worth noting is the slight difference in operating hours between the two buildings. The first building stays open from 10:00 until 19:00, while the second building which offers shopping stays open from 11:00 until 20:00. To get there, ride the Tokyu Tokyo line’s limited express from Shibuya, depart at Yokohama, then transfer to the Minato Mirai line and ride until Bashamichi Station. From there, cross over the water towards Yokohama World Porters, then take a right down the main street.

Within building number two, the Yokohama Red Brick Warehouse houses a plethora of stores with many different kinds of merchandise. There are even special seasonal goods, while events are hosted in the space between the two buildings. One worthwhile shopping experience is the ball soap store, where they allow you to sample most of their products. You can rub and squeeze each soft, squishy ball all around your hands. Using one of their hand-washing stations, you can wash up with any of their numerous products. There are even larger, plastic-covered soaps available to touch, but not sample. 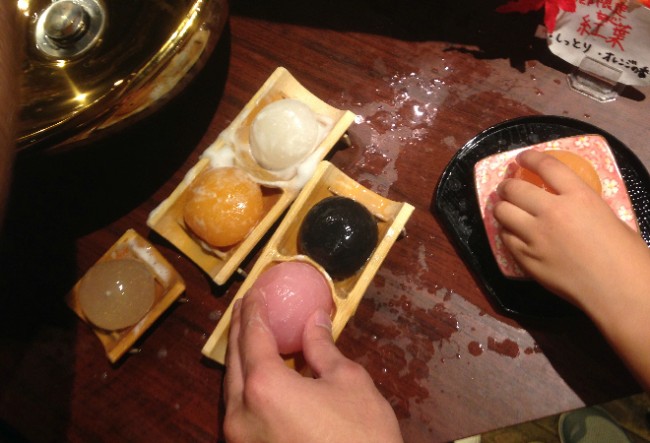 While shopping each store among the full variation, you will find one stocked with stuffed animals. With items from big dogs and cats to smaller pillow sized toys, they are a lot of fun to look at and soft to touch. There are countless different shops offering a variety of items pertaining to their specific style alongside plenty of others selling a large assortment of goods. For instance, the shopping mall includes a large woodcraft store with many items that are just a marvel to look at. The store even has a working wooden computer keyboard and monitor. Naturally, the monitor’s edge is the only woodcraft on the thing. Mentioned earlier, there is a store filled with seasonal items in addition to a wealth of other random goods.

During October’s Yokohoma Oktoberfest, the special items were various sized boot cups. The store also had plenty large beer mugs if a boot was not to your liking. With several other German themed items, it is a lot of fun to browse. During winter, it should come as no surprise that the chosen holiday was Christmas. At this time, the shopping on offer included numerous Christmas items instead. Seeing as there are so many different holidays and events they could pull from across the world, it makes each Yokohama Red Brick Warehouse visit a little different.

Near second floor balcony’s entrance, by the area reserved for a limited store, is a caricature stand. On the wall leading towards it, there are often various caricature. If you were not already surprised by the variety that the warehouse offers, the shopping also includes cookware, ranging from various pots and pans to silverware. The numerous interesting knickknacks alone make it easy to want to bring something home. There are cute themed postcards based on various characters like Hello Kitty and Snoopy.

Obviously, there are plenty of postcards based around the Red Brick Warehouse there as well. Needless to say, any shopping mall wouldn’t be complete without clothing or accessories. When it comes to clothing, a large store selection is available for perusal within the warehouse. One more interesting spot is Cayhane, a store selling products which help you connect with the earth and nature. Other than clothes, they sell hair accessories and even incense. Each clothing shop has its own style, and along with the five jewelry stores, you will surely be able to find clothes for nearly any style. 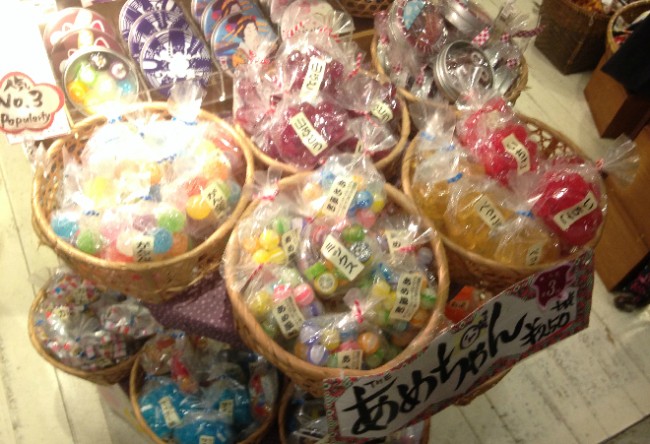 The balcony is rather relaxing; it is just a single long strip where one can walk up and down. At the end, closer to the water, hangs the bell known as the “Bell of Happiness” which supposedly brings good luck for couples when rung. 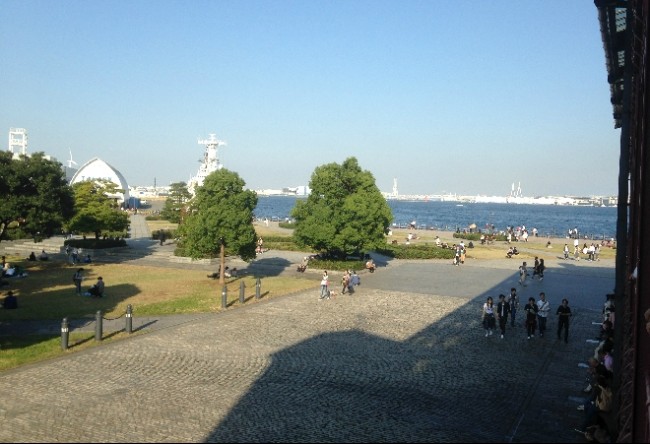 Previously mentioned was the event area between both warehouses used for hosting various seasonal events. The two that I was able to see with my own eyes were the Yokohama Oktoberfest and Yokohama Christmas Market. Oktoberfest was of course, German-themed, and sold assorted beer and sausages. After entering, there were lines of stalls where one could buy food. In the center, towards the water, were many eating areas customers could enjoy the event. Off at the side, there were various games which many children were playing. The most popular, was “Double Dutch,” where players would line up alongside a spinning rope, and jump over it as it was moving.

The Christmas market was rather different than Oktoberfest. The main attraction was clearly the ice skating rink, known as the “Art Rink”. This time, it was the stalls that were off to the side. While, like Oktoberfest, there were sausages you could buy, on top of that there was Glühwein, otherwise known as mulled wine. That was not all though, as there were plenty of other snacks for purchase to enjoy under the outdoor lamp heaters. 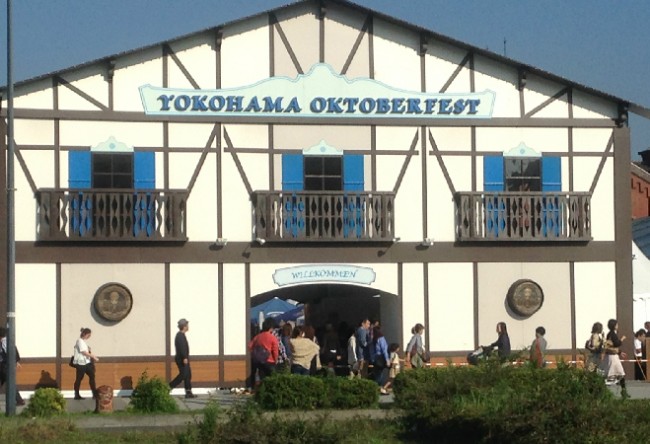