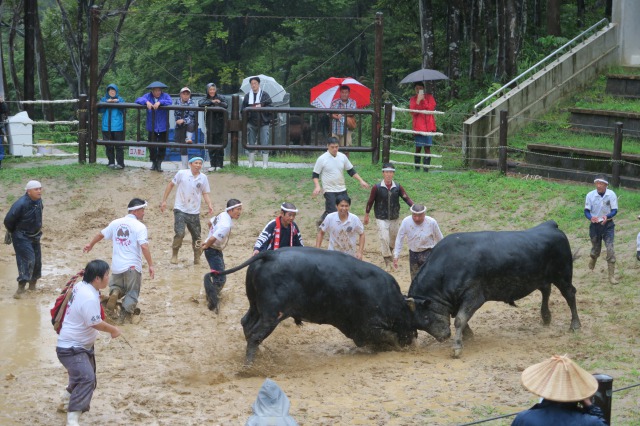 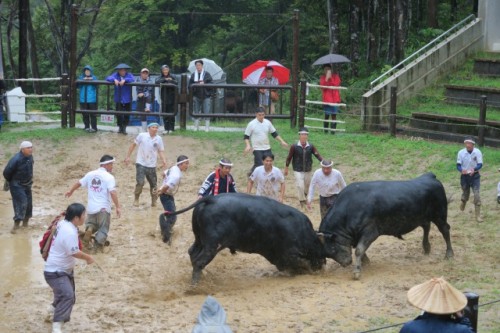 The sake has been drunk, the bonds have been thrown off and the bulls have been released. Come to Yamakoshi to see some of the most peaceful and exciting displays of bull fighting in the world. Bare witness to Tsunotsuki! 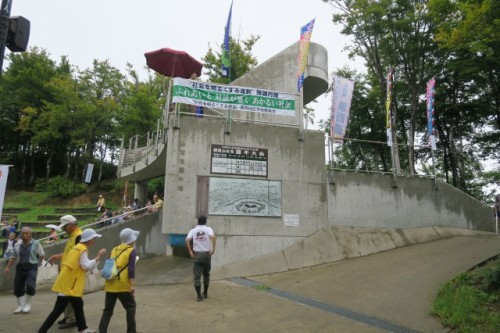 Before going to the bull fighting, I was a little skeptical. After all, I’d heard about all the brutality and murder that tend to go hand in hand with bull fighting and that really wasn’t something I wanted to ever witness. However, Tsunotsuki is something completely different; a battle of strength that does not necessarily have a definitive winner. But this does not distract from the fun of the event and in fact, focuses entirely of the fun and tradition of the event, more than on winners and losers, which I think sends an important, harmonious message throughout Yamakoshi’s close-knit community. 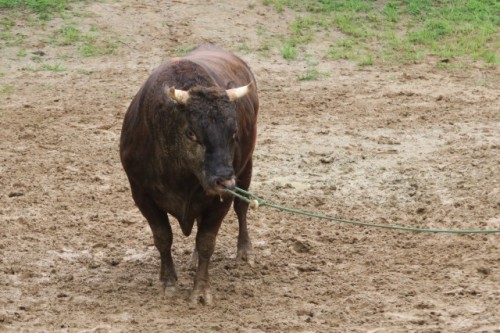 Tsunotsuki, with its a thousand year old history, is about as traditionally Japanese as you can get.
Two exceptionally powerful bulls lock horns in a bid to find which is the strongest and most highly spirited, pushing each other around the ring until they lose their strength and stop their movement. In this way, it could almost be likened more to sumo wrestling than the sharp horn gouging and brutal murder that springs to mind when you mention the words ‘bull fighting’. The bulls even have names similar to those of sumo wrestlers and they share the same battling season. 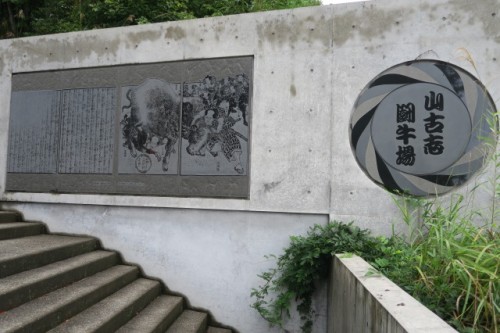 The event has remained popular even into the present day without deviating from its original form. Even after a number of bulls were killed in the 2004 Chuetsu earthquake, Tsunotsuki remained in the spirits of the people of Yamakoshi. People scrambled desperately to save the bulls from collapsed barns but it was no use, resulting in a massive blow to the industry. 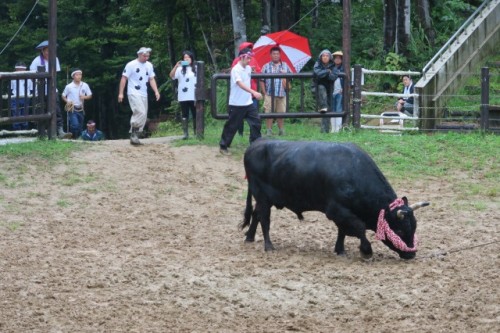 Eventually, due to the sheer resilience and power of the people, they were able to bring it back, stronger than ever, providing hope for the people that things were getting back to normal. Staying true to tradition has earned Yamakoshi village’s Tsunotsuki the title of national significance, making it an intangible cultural asset, of which the people are very proud. 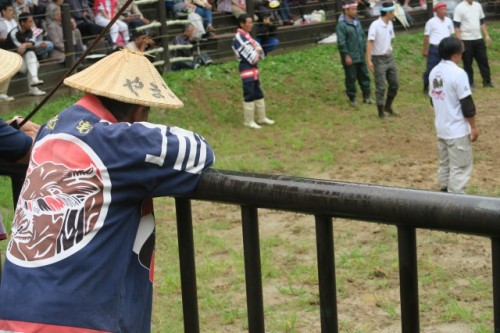 The walk up to the bull ring was paved in plaques, proving the sheer significance and popularity of this once in a life time event. After all, where else can you see some harmless bull fighting? A number of marquees were dotted around the outside of the ring, each selling some form of game time snack. I saw people returning with warm, steaming bowls of noodles, while others sat in the ring drinking beer or the bento boxes that they had brought with them. In fact, almost everyone seemed to be eating or snacking, which I thought brought about a nice family picnic vibe that I thoroughly enjoyed. 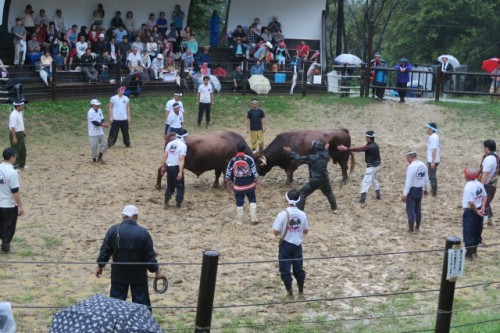 The ring itself is sheltered in some places almost all the way round the circumference. Since I arrived a little late, I sat in an uncovered seat but was given a mat to sit on at the entrance, which I eventually broke because it was so small and fragile. Since the seats are concrete, I would recommend bringing something nice to sit on because it’s a long time to sit on something absolutely solid regardless of the weather. It wasn’t raining much, so I braved the outside seat but the weather did get increasingly worse and I was rather soaked by the end, regardless of having an umbrella the whole time. So, arrive early and get a covered seat just in case. 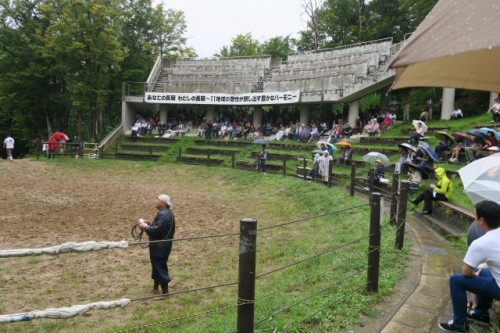 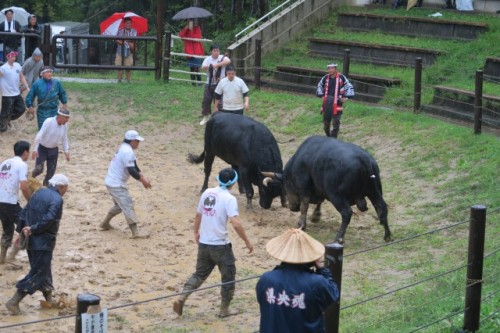 The ring itself is laden with simply ground surrounded by a ring fence with two gates, which the seko (the men who capture the bulls and supervise the ring) used to enter the ring at the start of the event. The seko created a circle and those were old enough, took a swig of sake from a massive bottle held by the master seko. And, after a few announcements, the battles got underway. 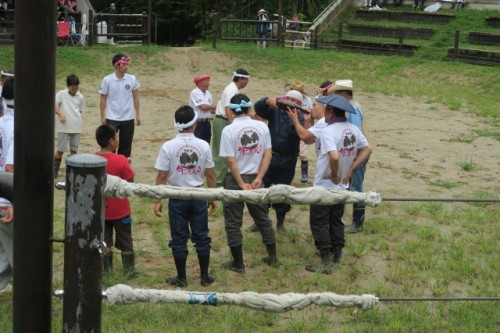 In the early stages, as the rain was barely dripping down to the earth, the low ranking bulls began to battle; their noses still bound with rope for the safety of the seko. Yet, as the dirt got slimier and the ring became more of a muddy pool than any kind of ground, the battles increased with intensity. Turns out, the non-stop rain was actually very fortunate as it made for a far more interesting bull fight, particularly when the seko were sliding around the ring as well, trying to catch the bulls at the end of the battle. Often they would try throwing their rope around a leg or try to catch it by its horns so a seko could get to the bull’s most vulnerable part, his nose. And, many times, it would take the whole group of 10 – 15 seko, chasing and sliding around the ring a long time to actually capture the bull. This turned out to be probably my most favorite part of the whole event. 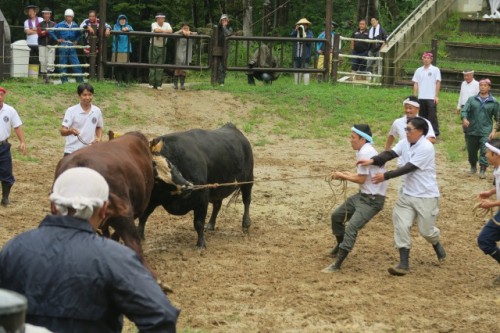 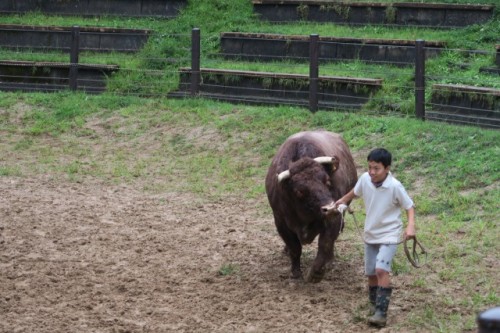 The high ranking bulls took to the ring, their tethers were thrown in the air with a cry from the seko and the rain began to fall, suitably matching the intensity of each match until the highest ranking bulls took center stage. The final battle ended with a bang, as the bulls locked horns and slid each other around the ring, sending mud flying and splashing in all directions. The event was over, the seko drenched, muddy and exhausted, and the crowds went wild. Even though it is one of the only bull fights that does not determine clear victory or defeat, it does not stop this being one of the most exciting, unique and safe animal sports in the world. It is easy to see how the bull has become an iconic symbol to the people of Yamakoshi. 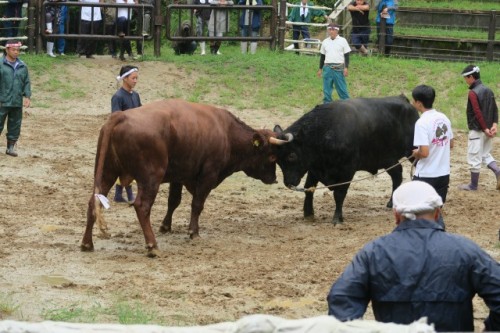 There are only around 8 bullfighting tournaments held between May and November, making use of a variety of differently aged (between 3 – 15 years old) and coloured bulls, with around 15 consecutive battles taking place each event. Watching the bull fighting generally costs ¥2,000 for around 3 hours of non-stop entertainment. So witness the greatest test of animal endurance, as these unbelievably huge animals, surrounded by men and even boys, lock horns for one of the most original bouts you will ever see. 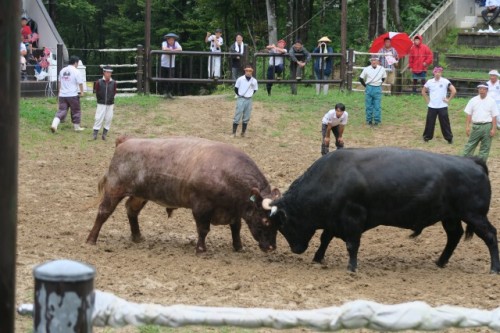