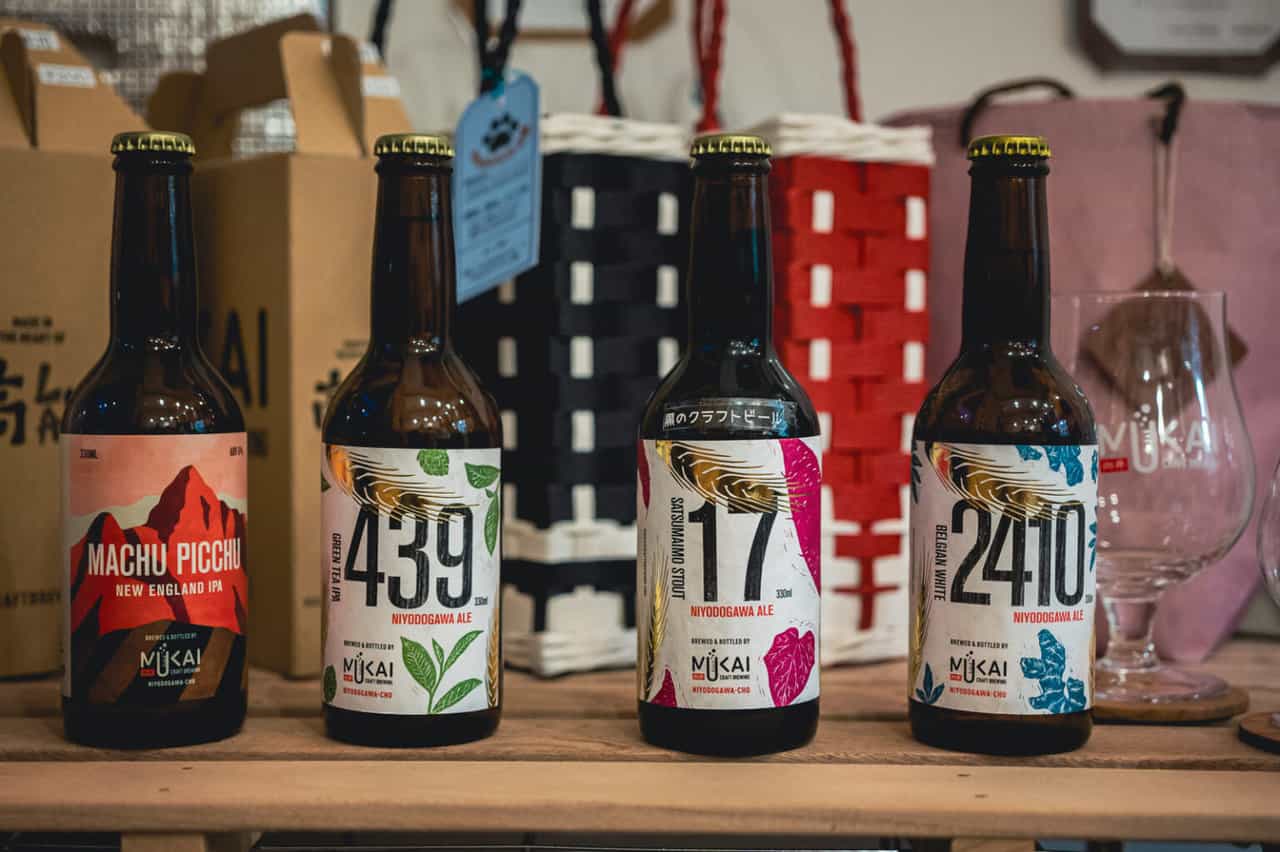 By James DaviesNovember 24, 2022No Comments

While sake might be Japan’s most famous alcoholic beverage, beer is undoubtedly the most popular. There is an enormous range of beer in Japan to sample. The most well-known are popular Japanese beers that dominate the domestic market made by long-established brewers such as Asahi and Kirin.

Yet there is also a flourishing craft beer scene in Japan that continues to go from strength to strength. Craft brew pubs and microbreweries are cropping up at an incredible rate all over Japan, each offering an ever-expanding array of excellent IPAs, pilsners, wheat beers, stouts, porters, fruit beers, and more. The first time I visited a craft beer pub in Tokyo I was amazed by the sheer variety and choice of locally brewed beers that were available on tap.

The History of Beer Brewing in Japan

The history of brewing beer in Japan dates to the mid-19th century. Beer was introduced into Japanese society by overseas traders following the end of Japan’s policy of international isolation in 1854. By 1889, three of the companies that would go on to become some of Japan’s largest breweries had all been founded, namely Asahi, Kirin, and Sapporo. Such was the impact of beer on Japan that the area of Tokyo called Ebisu is named after the Yebisu brewery, which opened here in 1890.

What is the Beer Culture in Japan?

Japan’s long-established major breweries have helped to create a strong beer culture in Japan. Lagers have long been the best-selling beers in Japan, typically sold in cans in off-licences and convenience stores or as draft beer in bars. Traditional lantern-lit alleys called yokocho (横丁) filled with Japanese pubs and bars called izakaya (居酒屋) are common in most major cities in Japan, usually found next to major train stations.

German-inspired beer halls are common in Japan too. A popular after-work haunt, Japan’s beer halls see steins of lager served alongside a lengthy menu of Western-style food in an often fairly ornate setting. The rise in the number of microbreweries in Japan over the past few decades means that there’s also an increasing number of craft beer bars to be found throughout the country. Brewpubs in Japan typically attract younger drinkers, including young women and couples who drink beer for the taste whilst socialising with friends.

While the stereotype of salarymen getting paralytic with their colleagues in izakayas after work is grounded in reality, in general, beer culture in Japan has much less of an impact on broader society than it does in other countries. For example, drinking in public is not illegal in Japan, and it isn’t frowned upon as it very rarely results in anti-social behaviour. Though it’s far from a common sight, it’s not unusual to see people (usually men) walking home from work drinking from a can of beer. As you’d expect in Japan, beer vending machines are also fairly common, usually placed outside liquor stores.

The Most Famous Brands of Japanese Beers

Five Japanese beer brands dominate the domestic market, many of which are also sold and well known overseas. The most famous Japanese beer brands are Asahi, Kirin, Sapporo, Suntory, and Orion. Yebisu beer, one of the first beers to be brewed in Tokyo, is now owned by Sapporo Breweries.

Japanese beers are typically light and refreshing with a smooth taste. The most famous beers made by Japan’s biggest brewers are all lagers that tend to be somewhere between 4-5% ABV. The most popular Japanese lagers include Asahi Super Dry, Kirin Ichiban Shibori Lager, Suntory Premium Malts, and Sapporo Nama Black Label. Whilst these mass-produced beverages are often sniffed at by beer connoisseurs, I’ve always found them to taste better and be much more enjoyable to drink than the equivalent market-leading American or European lagers. Draft beers served in bars in Japan typically have a large head of foam. It is thought that a good thick head of foam will prevent the beer from going flat and losing its taste.

Another type of Japanese beer is called happoshu (発泡酒). Happoshu is a specific category of beer that is defined as anything where malt makes up 67% or less of its total ingredients. There is less tax on lower malt beers, which means they are cheaper than regular beers and lagers. The lower price of happoshu has seen its popularity rise amongst beer drinkers over the past few decades. Many breweries make several happoshu, which have a lighter taste and are often marketed as being healthier than regular beer with its lower calorie and carbohydrate levels.

A change in Japan’s tax laws in 1994 lowered the amount of beer a brewery had to make in a year from 2,000,000 to 60,000 litres to obtain a brewing licence. This change led the way for the country’s current craft beer boom, and Japan now produces an incredible variety of craft beers, known as ji-biru (地ビール) or kurafuto biru (クラフトビール) in Japanese.

Japan’s craft breweries often take their lead from the brewing techniques practised by independent brewers based in America and Europe. As lagers dominate the domestic beer market, Japan’s craft brewers tend to avoid making their own, instead focussing on producing everything from pale ales, German-style wheat beers, colourful fruit beers, dark, super-strength porters, and stouts. These are made by independent breweries based in all corners of Japan.

Where Can I Buy Craft Beer in Japan?

Microbreweries and craft brew pubs are cropping up at a phenomenal rate all over Japan, especially in urban areas. Some craft beer bars (also called tap rooms) typically sell a variety of beers made by a range of independent brewers based in Japan and from craft breweries based overseas. However, many craft brew bars are run by independent microbreweries. These bars will have several of their own range of craft beers on tap, usually complemented by guest beers made by other craft beer breweries based in Japan or in Europe and the United States. Yona Yona, one of the largest craft beer brewers in Japan, has several modern, stylish bars in various locations throughout Tokyo.

An ever-growing range of craft beers can also be found in liquor stores, though the industry’s leading players still dominate the shelves. Local, independently owned liquor stores are more likely to stock a decent range of craft beers, especially those located in areas with a young or trendy clientele. Surprisingly, it’s not uncommon to find locally produced craft beers in convenience stores in more remote parts of Japan, as many craft breweries place as much emphasis on their regionality as well as on the quality of the beer’s ingredients.

The Different Types of Craft Beer in Japan

Japan’s craft beers are heavily influenced by beers brewed in Europe and America. IPAs and pale ales are perhaps Japan’s most common types of craft beers. Most tap rooms will typically have a choice of several IPAs, one or two wheat beers, a fruit beer, and a robust dark beer, such as a stout or a porter. Though not as commonly produced as IPAs and pale ales, many breweries make lagers brewed in a similar style to traditional German pilsners. The reason why lagers are less commonly produced by independent brewers is two-fold. Not only is Japan’s beer market already saturated with lagers, but lagers also take much longer to brew than other types of beer, such as IPAs.

The flavours, as well as the alcohol content of Japanese craft beers, can vary wildly. In craft brewing, there is almost no ingredient that can’t be the basis of beer. Whilst pilsners and wheat beers might have hints of citrus fruits, IPAs, and pale ales often range from one extreme to the other. Expect to find the most traditionally brewed session IPAs alongside beers infused with anything from yuzu, wasabi, fudge, or even floral overtones.

The alcohol content can vary massively as well, with Japanese craft beers ranging in strength typically between 4% ABV to as high as 12% ABV in some cases. Craft beers with very high percentages of ABV are typically served in small glasses. Porters and stouts often have a high ABV and usually feature a strong hint of rich flavours, such as coffee or chocolate.

How to Order a Beer in Japanese

If you fancy a beer whilst you’re in Japan pop into any bar and simply say “nama biru kudasai” (なまビルください). “Nama biru” means draft beer, and “kudasai” means please. Most izakayas usually have one of Japan’s most popular lagers on tap, such as Sapporo or Asahi.

If you’re ordering a round and need to order more than one beer, then simply add the number of beers to the same sentence. For example, if you’re ordering two beers, simply say “nama biru futatsu o kudasai” (なまビルをふたつください). “Futatsu” means “two things”, which in this case means two beers. For three beers, its “nama biru mitsu o kudasai” (なまビルみつをください), with “mitsu” meaning “three things”.

If you’re heading to a taproom and ordering a specific craft beer, you can simply say the beer’s name, followed by “kudasai.” In most tap rooms in Japan, the names of craft beers are commonly written in English. These are usually displayed on a chalkboard behind the bar along with their ABV. When your drink arrives, raise your glass and say “kanpai!” (かんぱい), meaning “cheers”, and enjoy!

Japanese SocietySake and other alcohols

Born in Cardiff, Wales, I have lived in Tokyo since 2020. Having fallen in love with Japan on my first visit in 2013, I have since visited over 40 of Japan's 47 prefectures. I'm a huge fan of all things Japanese, particularly sushi, sumo and sake. Besides writing I'm also a passionate photographer. When I'm not planning my next article I can usually be found exploring Tokyo or plotting my latest trip to an as-yet-unexplored prefecture.