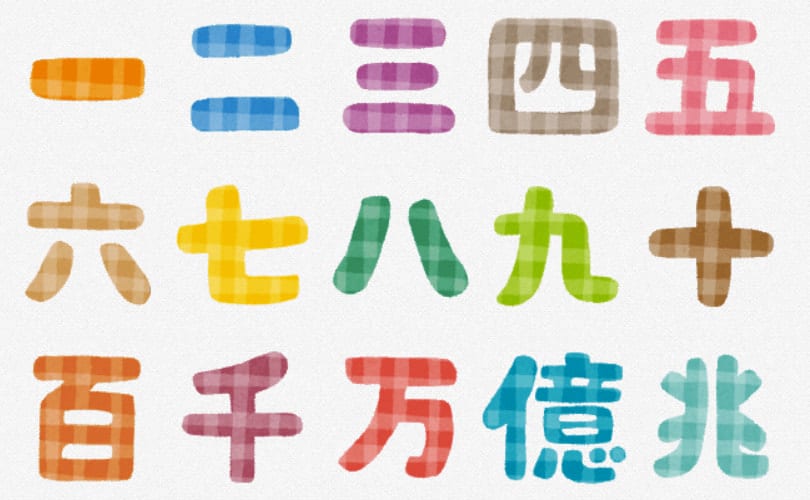 How to Count in Japanese Numbers

In everyday life in Japan, Arabic numerals (1,2,3…) are widely used, but each number still has its own Kanji character and a counting system unique to the country. Learn what makes numbers in Japanese so fascinating and learn a new way to count on your fingers.

How to Read and Write Japanese Numbers From 1 to 10

Here are the numbers 1 to 10 with their corresponding kanji:

Pay attention to the numbers 4, 7, and 9, as they each have several different readings. Seven is pronounced nana, for example, when talking about ages, but shichi is used when talking about dates and telling the time. Four is read as yon or shi, with the first being more widely used, as the latter has a close association with death (pronounced as shi.) Just like 13 is an unlucky number in some Western cultures, the Japanese are superstitious over the number 4, and many hotels do not feature a room 4. Nine can also be read in two ways; kyū and ku, with the second reading not often used, as its pronunciation is identical to the Japanese word for “suffering.” Therefore, the numbers 4 and 9 bring bad luck, whereas the numbers 3, 5, and 7 bring good luck.

Things go off course when we talk about 万, pronounced as man. This unit does not exist in western countries but signifies 10,000. One 10,000 unit is pronounced as ichi man (一万) . Larger numbers are grouped not in thousands as we know them in the West, but in groups of 10,000. For example, 60,000, according to the mathematical logic of the Japanese, is roku man (六万), 6×10,000. This acts as a mental workout for those from Western countries as they seek to figure out larger numbers in Japanese.

How to Count Persons and Objects with Japanese Counters

In Japan, the way of expressing numbers changes according to what’s being counted. Living things and objects are classified into categories, each with its classifier or numerical counter. This classification, found in several Asian languages, stems from Confucianism.

Does it seem complicated? It can certainly seem that way for those learning Japanese as a foreign language. Most counters vary their pronunciation by the number they are associated with, and it is generally the first letter of the counter that changes. For example, one cylindrical object is ippon. Three cylindrical objects are sanbon. In addition, the counter can change the pronunciation of the number itself, such as in the example below for counting people, which might prove helpful to know when you’re travelling in Japan:

You will be pleased to know that there is a universal counter for inanimate objects known as –tsu (つ), which can, for example, be used when ordering dishes in a restaurant. It may seem practical, though the pronunciation of the numbers is different when this counter is added.

As you will notice, the counter comes after the noun and number. For example, “two books” is hon o ni-satsu (本を二冊). When ordering “four tempura,” the universal counter -tsu can be used like this: tenpura o yottsu, onegai shimasu (天ぷらを四つ、お願いします).

How to Count on your Fingers in Japan

Did you know that the Japanese count with their fingers starting with their hands open? Compared to some western countries, which start with fingers folded over and closed, in Japan, people count to themselves, starting with an open hand with fingers outstretched to signify 0. Then, they fold the finger into the palm at each number, starting with the thumb until the hand is fully closed at 5. They continue by reopening the fingers, beginning with the pinkie finger for numbers greater than 5. This system can pose a challenge as 4 and 6 are the same, as well as 3 and 7, 2 and 8, and 1 and 9.

This counting method also changes depending on whether the person is counting to themselves or they shows a number to another person.

To avoid ambiguity, there is another system for when you run out of fingers which can prove particularly useful for ordering at a restaurant. You start with a raised hand, while the palm faces the speaker with all fingers folded, you unfold a finger from the palm with each number. For 1, you unfold the index finger; for 2, the index and middle finger; for 3, you open the ring finger, or sometimes the thumb, and so on.

In Japanese, each number corresponds to a kanji. The logical counting system determines the number depending on how kanji is combined. The system has certain special features, such as the presence of 10,000 units, specific counters for each category of living thing and object, and a unique method of finger counting. For more basics of the Japanese language, check out our other articles on how to say thank you in Japanese and the meaning of expressions such as “itadakimasu” and “otsukaresama“.

Translated from French by Mark Webster