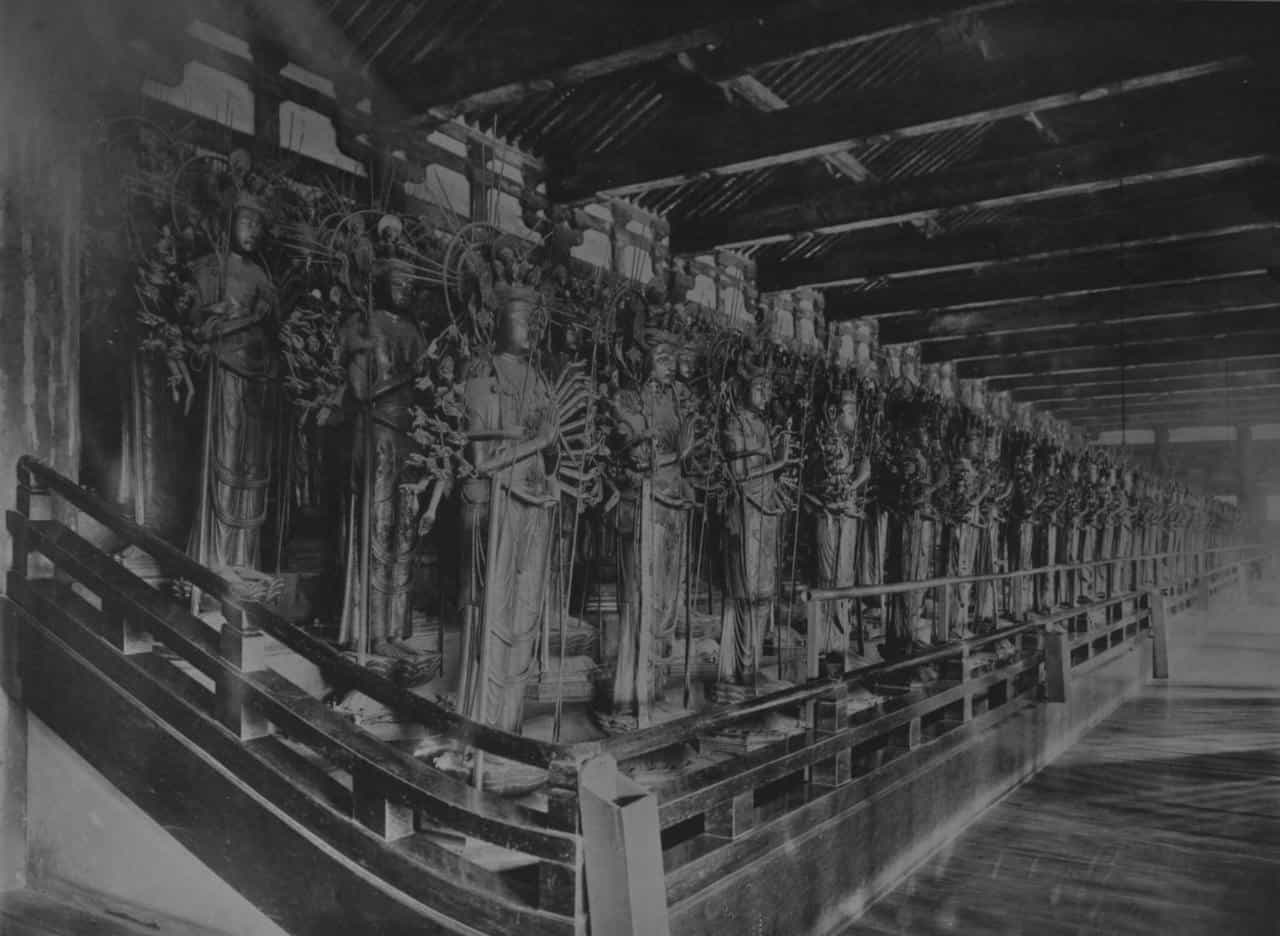 In the eastern area of Kyoto in Higashiyama district, a building full of ancient culture for nearly 800 years goes unnoticed by many travelers. On the outside, it is of simple design and without extra frills, yet what holds inside has completely amazed me. So much so that it remains one of the fondest travel memories of Japan.

It’s the Sanjusangendo: A temple of the school of Tendai Buddhism, famous for its thousand and one statues of Kannon, Bodhisattva of mercy.

The temple interior is considered sacred, and it’s forbidden to take photos. So, why settle for the images that you find online and in this article when you could admire such beauty with your own eyes? Maybe the external structure will not seem particularly charming, but trust me: once you cross the entrance, it will prove to be something incredible that you had never seen before!

The Sanjusangendo As An Emblem of Kannon, the Goddess of Mercy

The original name of this ancient temple is Rengeō-in (蓮 華 王 院, “Hall of the Lotus Flower King”), but it was later nicknamed Sanjusangendo because of its architectural features. This name became increasingly popular over time and now is indicated with this term on maps and tourist guides.

Sanjūsangendō ( 三 十 三 間 堂 ) means “Hall with 33 intervals” (三 十 三: thirty-three; 間: interval; 堂: hall) and symbolizes the main hall, built on a series of pillars interspersed with 33 spaces. In traditional Japan, the size of a building is measured by counting the number of intervals between the columns that support it. Thanks to its 120 meters long, Sanjusangendo Temple is now the longest wooden structure in the country.

But why was this number chosen? It was certainly not a coincidence: according to Buddhism, 33 is a sacred number. In Japan, it is believed that the Bodhisattva Kannon promises to save all sentient beings by appearing in 33 different forms.

The Sanjusangendo is, therefore, the emblem of the importance of Kannon. In the center of the main hall is a huge statue representing Kannon with a thousand arms and eleven heads, flanked by five hundred human-sized statues on either side of Kannon. Imagine walking around this hall and seeing the many faces of Kannon, the delicate scent of incense in the air, the silence interrupted only by the sound of your steps, the antiquity, the art, and the sacred element surrounding you. Doesn’t that sound like a sensational sight?

A Step Back: The History of the Sanjusangendo Temple

The foundation of the Sanjusangendo dates back to 1164 during the reign of Emperor Go-Shirakawa (at that time seventy-seventh emperor of Japan) with the financial help of Taira no Kiyomori (military leader of the Heian period). Go-Shirakawa was not only a faithful devotee of the Kannon bodhisattva but also a person confident that he could bring back peace to the country by spreading the Buddhist faith.

In Japan, it’s well known that since many buildings are built primarily of wood, they are easily subject to fire. Rengeō-in also met this fate, and in 1249 the main building was burned to the ground. Emperor Go-Saga ordered the building to be rebuilt in the same style as the original. The reconstruction ended in 1266, and the structure we see today dates back to this year. Over the centuries, only four restorations have been carried out.

Kesho Yaneura: The Style of Construction

Rengeō-in was built in a traditional construction style known as keshō yaneura (化粧屋根裏) and dating from the Nara period (710-794). Yaneura means “attic,” and this technique aims to make the lower part of the roof visible. Walk down the main corridor and then look up: you’ll feel like you’re in a loft! Initially, the room’s interior was beautifully decorated with a multitude of brightly colored designs such as clouds and flowers, which have now faded into the natural color of the wood today.

The Bodhisattva Kannon and its 1,001 Representations

The center of the Sanjusangendo houses a massive statue of Jūichimen Senju Kannon (十一面千手観音 – Kannon with eleven faces and a thousand arms). Kannon is represented in a seated position with eleven faces and twenty pairs of arms, which in total, symbolize a thousand arms since each (arm) saves twenty-five worlds. The statue measures about 3.3 meters in height and was made during the reconstruction of the temple by the famous sculptor Tankei (one of the most important of the Kamakura period, XII-XIV century) in Japanese cypress.

Tankei used a technique called Yosegi zukuri (寄木造): by joining multiple hollow blocks of wood, he began to carve a rudimentary basic figure. Later, a more detailed surface carving of the body takes place, and, finally, the statue is painted and covered with gold leaves. Today the statue of Kannon is part of the National Treasures of Japan.

What enriches this temple even more is that Kannon is flanked by a thousand other statues that represent it in an erect position. Placed on both sides of the main one, they are symmetrically aligned in ten rows and fifty columns: a truly incredible precision!

Do you remember the fire in 1249? Fortunately, 156 statues were saved and are still on display in the Sanjusangendo, while the remaining 844 statues were built in the XIII century. Their completion took about sixteen years and saw the commitment of over 70 sculptors under the supervision of master Tankei. All statues are similar in size and appearance, but with a closer look, you will notice that each one has some unique facial features.

This multitude of statues of the Bodhisattva Kannon creates in the visitor a deep sense of intimacy with it. There’s a common belief that it’s possible to see the face of the person we love the most among the various depictions.

Not Only Kannon: Raijin, Fujin, and the Gods of the Guardians

Behind the central figure of Kannon, you can admire two other wooden statues: Raijin (雷神 – God of Thunder and Lightning) and Fujin (風神 – God of the Wind), both notable figures of Japanese mythology. Their origins go back to the gratitude and fear that ancient peoples felt towards nature. It was believed, in fact, that Raijin and Fujin controlled the trends of rain and wind, thus helping to obtain good crops for the livelihood of the population.

The statues of Raijin and Fujin are also considered masterpieces of the Kamakura period. If you have visited Asakusa’s Sensoji (浅草寺) in Tokyo, you will surely remember seeing them protect the Kaminarimon (雷門 – the Thunder Gate), located at its entrance.

In front of the statues of Kannon are twenty-eight wooden statues representing the deities of the guardians, protectors of the Bodhisattva. They are located equidistant from each other, along all the path that crosses the salon. Each one of these mystical figures native to ancient India has unique features and realistic facial expressions.

They are gods or spirits of beauty, strength, prosperity, intellect, and more who protect the faithful from difficulties and save them from dangers. Don’t worry if you find it difficult to recognize them: each one has a plate with its name and a description in English of the element they symbolize.

Among my favorites are Kinnara (緊那羅 – music deity), Karura (迦楼羅 – a winged figure with a bird’s head, intent on playing the flute), and Naraen kengo (那羅延堅固 – the divinity of physical strength that defends the faithful from evil).

The Archery Festival: Omato Taikai and Yanagi no Okaji

If you happen to visit Kyoto during the middle of January, know that it’s the perfect time to go to the Sanjusangendo. On Sunday closest to January 15, the Ōmato Taikai (大的大会 ) is celebrated: the archery festival. It is said that, during the Edo era (1603-1868), a samurai named Asaoka Heibei shot 51 arrows in succession throughout the length of the temple hall: from this event was then born the Toshiya Matsuri, now called the Ōmato Taikai. However, others claim that the festival has even more ancient origins and dates back to the Momoyama period (1573-1603).

On this day, about two thousand girls in their twenties gather at the Sanjusangendo to celebrate their entry into adulthood, wearing traditional dresses with the most cheerful colors. It’s such a renowned festival that families arrive at the Rengeō-in from all over Japan, planning their trip well in advance.

The archery test takes place on the ground west of the main building and consists of shooting two arrows towards a target located about 60 meters away.

The festival is also celebrated on the same day as the Buddhist ritual Yanagi no Okaji (柳枝のお加持 – Rite of Willow): believers are sprinkled with purifying water on the back of the neck with a branch of sacred willow that is believed to help heal and prevent migraines.

How to Get to Sanjusangendo Temple

I discovered the Sanjusangendo during my university studies on the book of art history and Japanese architecture. After being there, I am confident that it’s one of those places to visit at least once in a lifetime. I advise you to plan your visit during a sunny morning, immediately after the opening hours. In this way, you can see the sunlight that filters through the windows and shines on the burnished gold of the 1,001 statues of Kannon.

Italian by birth, Japanese in the heart. At university, I studied Japanese language and literature and since then I have become passionate about this culture. In 2016 I visited Japan for the first time and it was the most beautiful experience of my life. I love reading books, drinking tea, traveling, and taking photos. My dream is to combine my passions for languages, tourism, and social media marketing. Let's dream of Japan togheter!