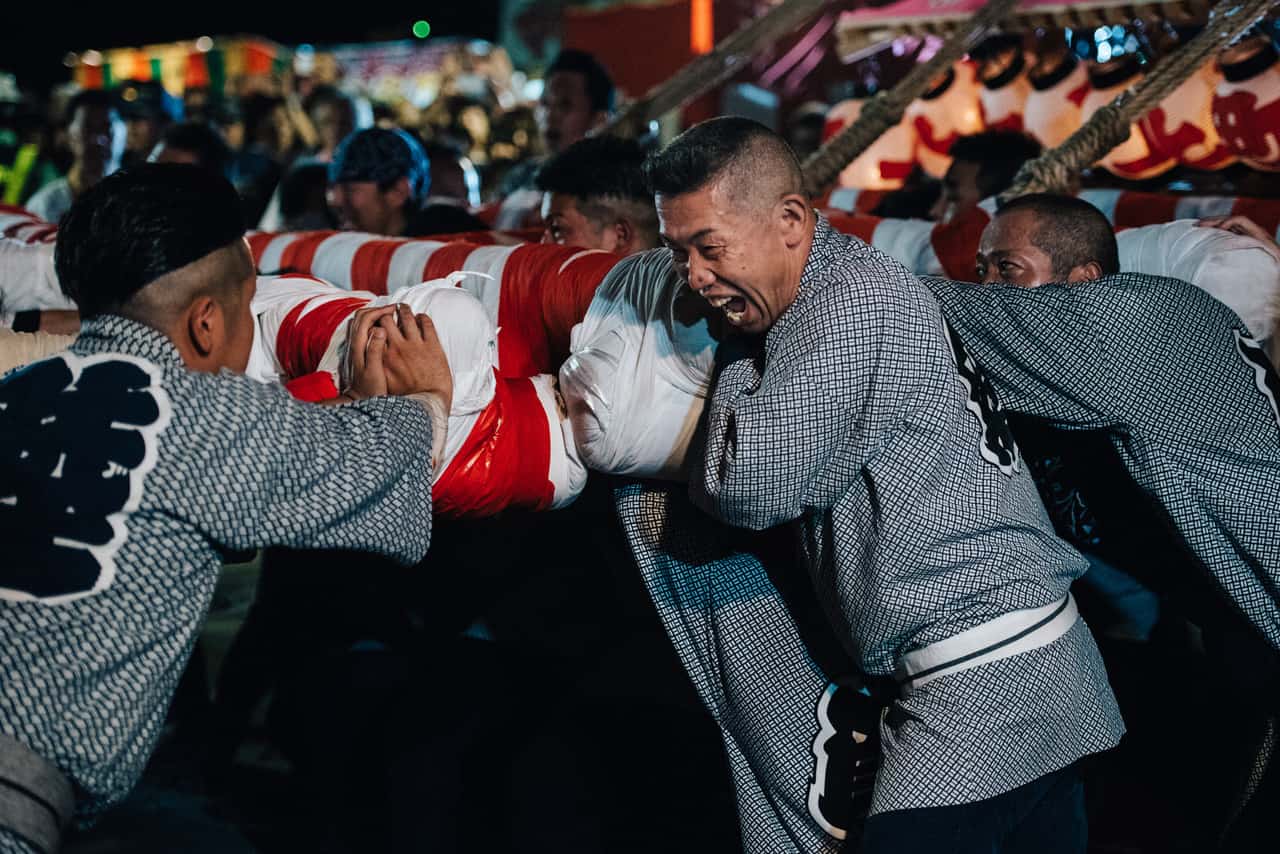 As the huge float swung our way with a dozen men carried in its momentum, my guide, Mr. Takahashi, tugged on my sleeve and pulled me to safety. This was the Iizaka Kenka Matsuri, one of the three main fighting festivals in Japan where teams wielding large yatai (wooden floats) compete in a sort of demolition derby for the favor of the Shinto gods for the coming year. And here I was, a few meters from the action, experiencing this rare event from the perspective of a participant. 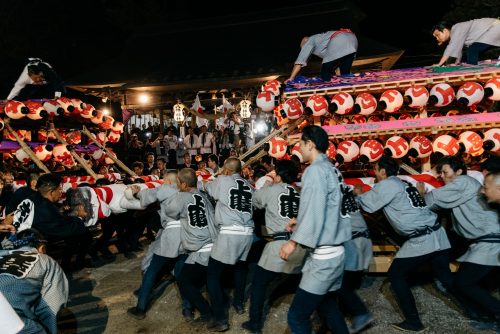 But let’s start with how I got here.

A few hours earlier, I had arrived from Tokyo at Nakamuraya, a historic ryokan (Japanese-style inn) in Iizaka, Fukushima. Waiting for me in my room was a happi coat, the kind of clothing typically seen worn at festivals. My host, Mr. Abe, explained that this was the uniform of Uemachi, one of the six teams that participate in the Kenka Matsuri and if I wore it, I would be recognized as part of their team and able to move freely around the Uemachi yatai during the festival. 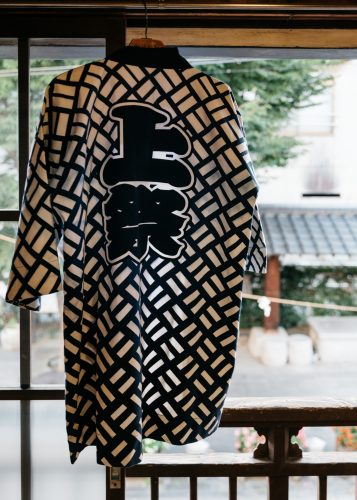 I would be picked up from the ryokan by Mr. Takahashi after dinner. Mr. Takahashi was also a member of the Uemachi team and would explain the event to me as well as help ensure my safety during the fighting portion of the event. During my dinner, a parade of participants made its way though the streets outside the ryokan, and the Uemachi team, sponsored by the businesses in the area, stopped to greet Mr. Abe and receive a gift from him. 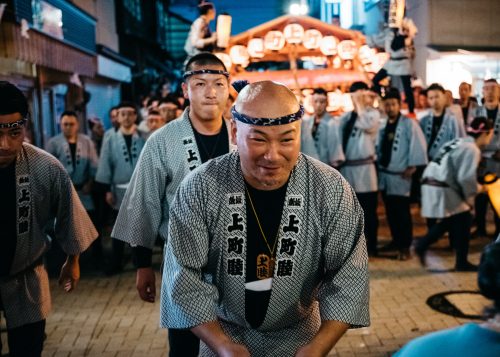 The parade, from what I could tell, was a sort of public relations campaign to drum up support (literally, as a team of taiko drum players ride inside the yatai for the entire event) from the general public as well as the team sponsors in the neighborhood. Children and women carrying team inscribed lanterns proceeded the yatai, which was carried by a large group of strong men, with a few young women riding astride it waving team lanterns and cheering. At certain intervals, some teams would do tricks with their yatai like spin it in a circle or tilt it at dangerous angles, to the delight of spectators. One team even threw handfuls of gifts from atop the yatai to the excited crowd. If this was just the introduction to the festival, I couldn’t wait to see the main event. 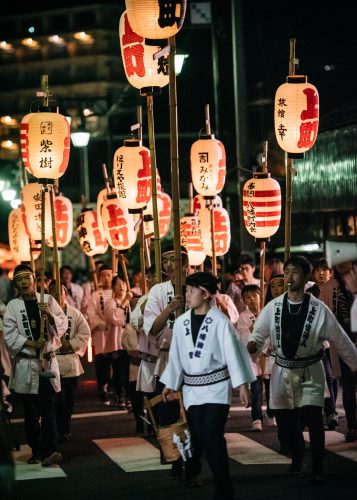 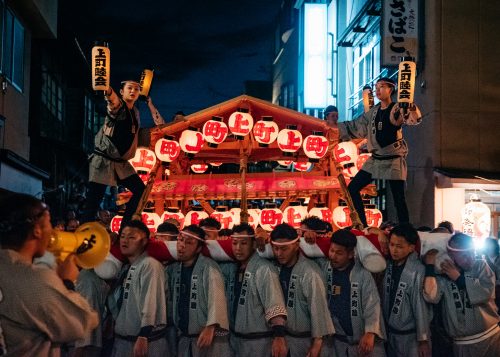 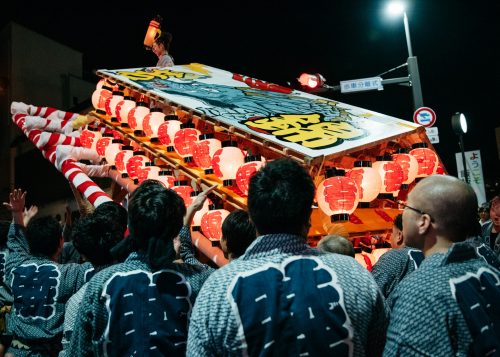 After viewing the parade, Mr. Takahashi led me through the streets back to Hachiman Shrine. Though the streets has been relatively uncrowded except where the yatai were immediately passing, the shrine was packed full of people, there to enjoy the many stands of festival foods (like the perennial favorite, choco-banana) and get a good spot to view the fighting. Even if you could not see the fighting live from where you were standing, the shrine set up a large screen to project a live feed of the fighting so nobody needed to miss out. 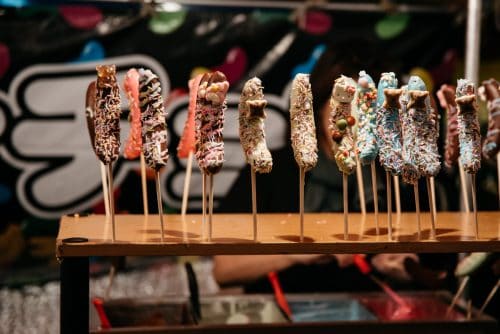 The Kenka matsuri has been taking place in Iizaka for over 300 years now, but Mr. Takahashi explained the modern version is a little tamer than the traditional style. Back then, yatai were crashing together until one of them was actually broken, and the assumption was that a lot more serious injuries to participants occurred as a result. The modern festival is still very dangerous and there are often minor injuries and rarely, serious ones. Fortunately this year there were no serious accidents.

Promptly at 8:30pm, the participants arrived, proceeded by the Hachiman Shrine’s own mikoshi led by a man dressed as a tengu, a type of Shinto god that represents war. After each team greeted the shrine’s priests and other officiants, the six teams broke off into pairs for the first round of battle. The question in my mind about whether this was just a tradition or serious competition was answered when I witnessed several real fights break out between participating teams. This was serious business. 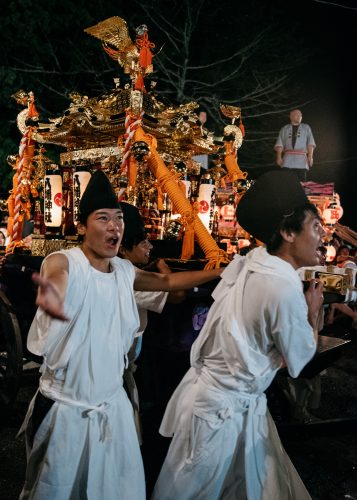 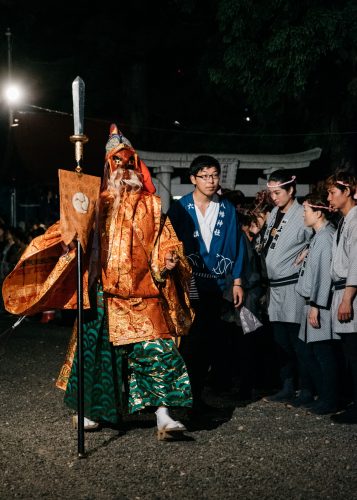 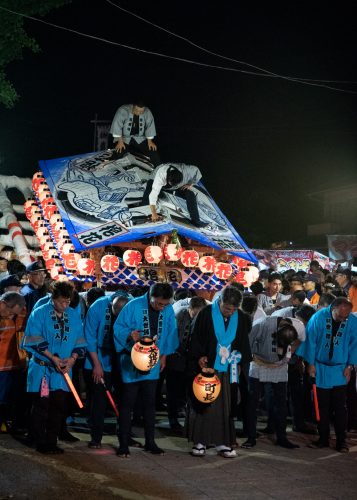 In the battle, the opposing teams started a few meters from each other, with about 30-40 men carrying the yatai. 5 or 6 of the toughest and bravest men stood in the front, literally in front of the yatai. When charging the other team, these men needed to duck, just milliseconds before the collusion, to avoid a serious injury. This was probably the most frightening part of the fight for me to witness. 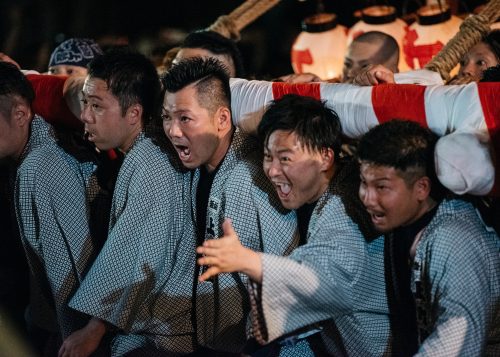 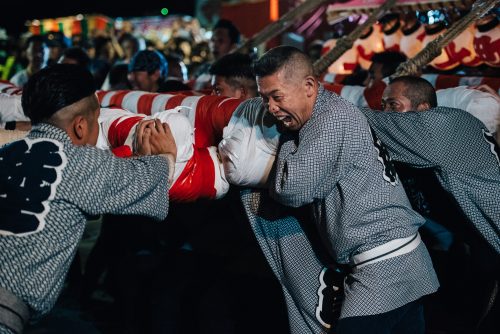 The team captain and co-captain stood astride the yatai during the event, barking orders and encouragement to their team members below. During some battles, the floats would lock up and tilt at extreme angles, creating a balancing act for the leaders on top. You would need nerves of steel to ride in this position. 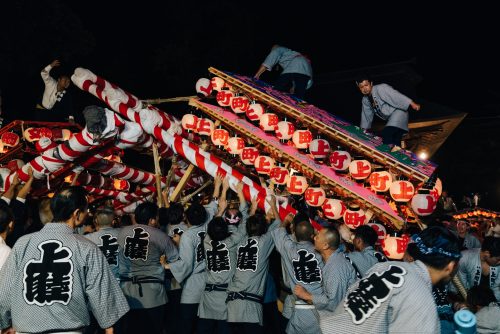 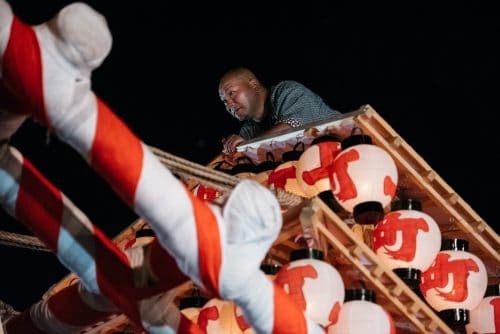 Though men were the only ones allowed to carry the yatai (being a Shinto tradition), the women on the team would jump in and help push from the back of the yatai when two of them were locked together in battle. Otherwise, they would stand to the side yelling encouragement to their team members. 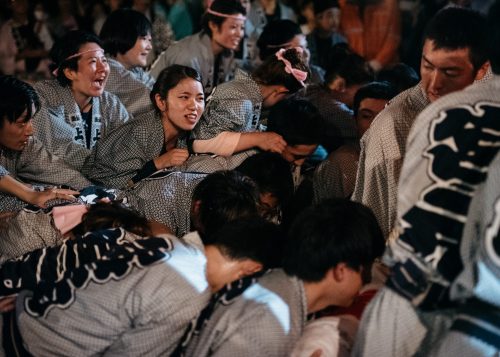 The fighting went on for about an hour and a half, with each team growing more and more exhausted with each battle. One of the strongest teams was forced to retire early as a penalty for something that happened in a battle last year. Another left because they were a smaller team and the men were too tired to continue. One by one, teams were either forced to leave or voluntarily left the shrine, to the applause of the spectators and other teams. As competitive as the event was, there was always respect shown for the opponents. The final battle came down to Uemachi and one other team. After three fierce clashes including one where I thought people were going to be crushed between the yatai and the granite stairs of the shrine, Uemachi was declared the victor. I am sure it was because they let me join their team this year and I will be available again in the future if they need good luck again! 😉 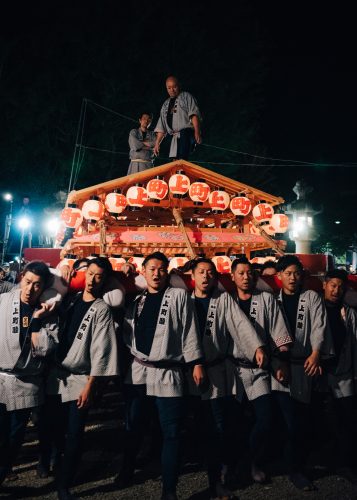 The following morning, all of the team leaders returned to the shrine to be blessed by the shrine priest and participate in a final solemn ceremony to thank the Shinto gods. The winning yatai sat in the courtyard outside the temple, basking in final glory before being dismantled until next year’s festival. 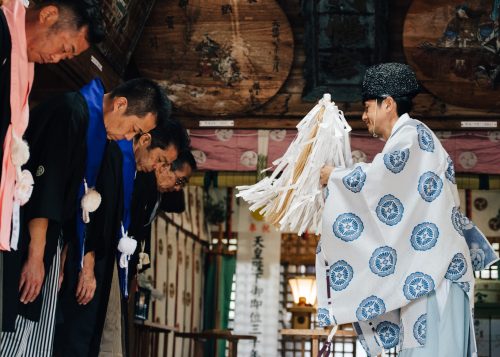 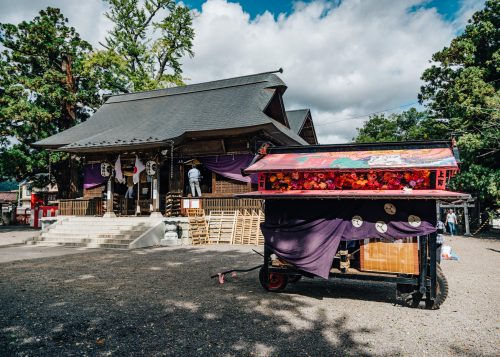 Lastly, the Uemachi team members made their way around the neighborhood, stopping at Nakamuraya to thank Mr. Abe for his support. The members of the team looked exhausted, but happy they could earn the favor of the Shinto gods for their neighborhood. At least for another year. 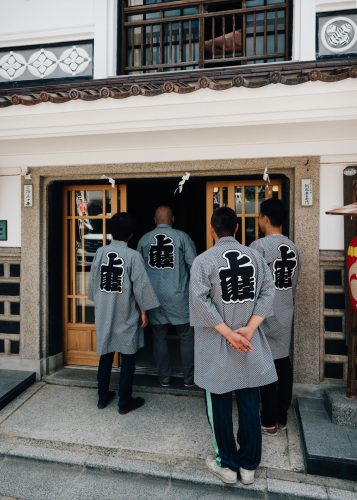 I am a huge fan of Japanese festivals of all types, but this was definitely the most exciting and at times, frightening festival I have ever experienced. As dangerous as it is, it is understandable why this type of festival has become a rarity in modern Japan. However, the tradition still lives on with strong support in Iizaka, and it is well worth a weekend trip to the Fukushima City area to view it. With so much other natural and historic beauty in the area, as well as the refreshing waters of Iizaka Onsen, there would be plenty for a visitor to do in Fukushima.

Getting to the Iizaka Kenka Matsuri

The Iizaka Kenka Matsuri takes place the first weekend in October every year. Due to its popularity, you should make reservations for accommodations well in advance, perhaps enjoying one of the local ryokans like Nakamuraya. To reach Iizaka Onsen Station from Tokyo, take the Yamagata or Tohoku Shinkansen from Tokyo Station to Fukushima Station and transfer to the Izaka line to Iizaka Onsen Station. The trip takes a little over 2 hours.