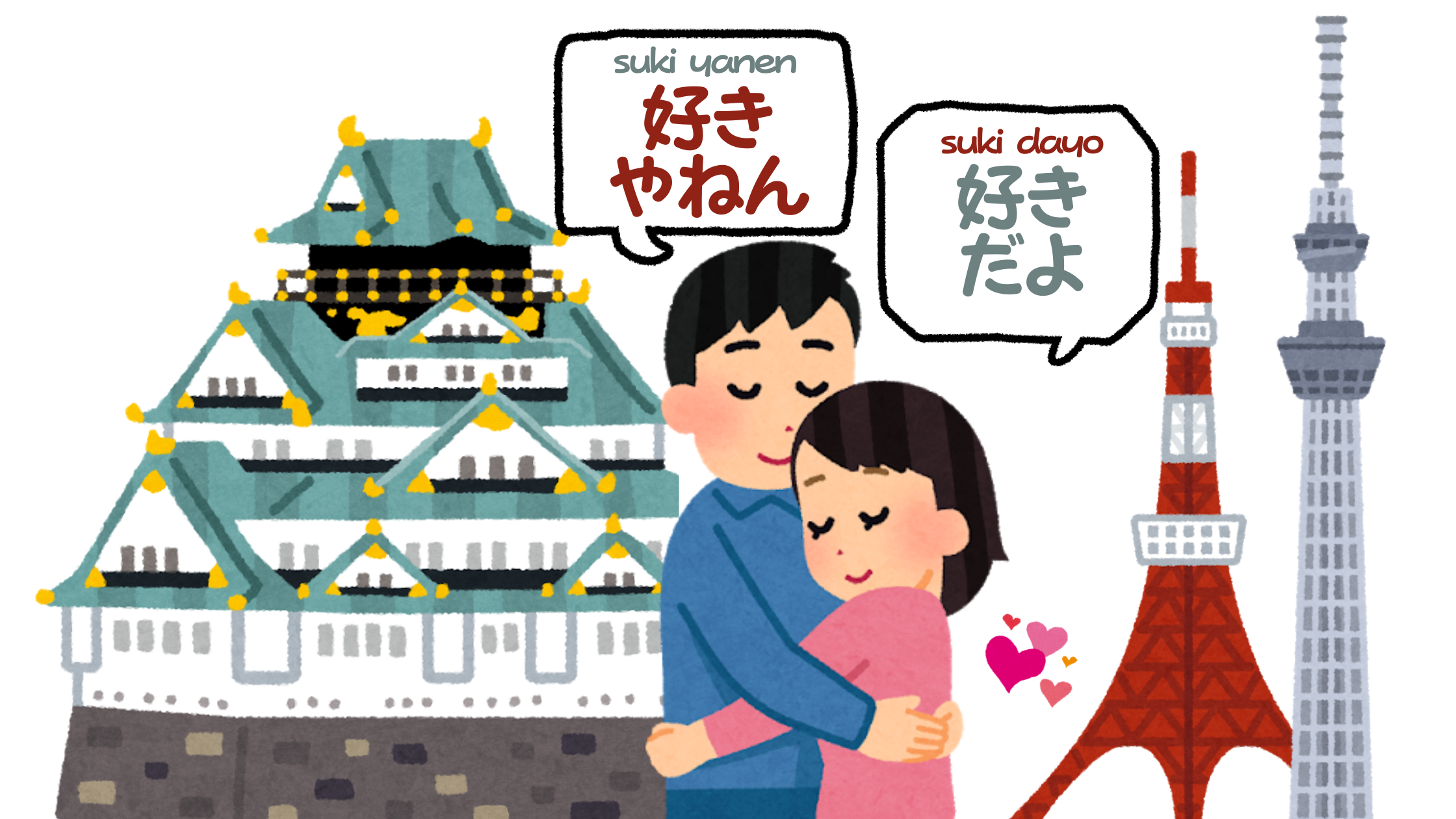 It is said that love is universal. That all human beings, wherever they are from, understand and express it with actions, gestures, or looks. Through our experiences, our learning, or our culture, we know how to give and receive love. But the reality is that feelings are not shown or perceived in the same way in all countries or cultures. The language of love changes from country to country, from region to region, and even from person to person.

Expressing feelings or saying “I love you” for the first time is not easy in any language, and doing it in Japanese is no exception. But if you are feeling love in the air, it’s time to get romantic. In this article, you will find how to express your emotions and feelings the “Japanese-style” and some important points to keep in mind before you start shouting your love from the rooftops.

Numerous studies indicate that most of the percentage of human communication is non-verbal. Our gestures and body language are essential to transmit signals or sensations without the need to use words. As we saw in our article on how to say thank you in Japanese, gestures also play a significant role. In Japan, where much of the communication is indirect, it is necessary to know the unwritten rules that govern a country’s social life and customs.

Kuuki wo yomu (空気を読む) is a widely used phrase that has a special value among Japanese people. In English, it is literally translated as “to read the air” and is similar to the phrase “to read between the lines.” Japanese people avoid direct communication and are usually very subtle when they want to express something. Therefore, when we communicate in Japanese, it’s important to know how to read between the lines, analyze the situation and pay special attention to gestures and small details.

It is normal in most Western countries to express affection with words to our partners, families, or even the closest friends. Saying “I love you” can be something natural or reflex action, but it is not that simple for a Japanese person. That is why many Japanese people do not openly declare their love and emotions but do so indirectly through gestures and displays of affection.

“I love you” in Japanese

But this doesn’t mean that Japanese people can’t express their feelings or that it is impossible to say “I love you” in the Japanese language. In fact, there are quite a few ways to express love, and it is important to know how and when to use them. Now is time to get romantic!

Kanji (漢字) is one of the three Japanese writing systems (although it came from China) and is based on ideograms. Japanese people use more than 2,000 kanji daily, mainly for expressing words or concepts.

Among these thousands of characters, there are two that represent the concept of love and appear in some of the words or phrases that we will see later. Although these two kanji mean “love,” they are not exactly the same, and there are some subtle differences between them:

How to say “I love you” in Japanese?

As we have just seen, the kanji 愛 (ai) means “love.” Thus, “ai shiteru” is the literal translation of “I (deeply) love you.” This expression appears in many songs, movies, doramas (Japanese television series), manga, or anime. But in real life, this word is rarely used as it has a straightforward and direct meaning.

It refers to a deep, romantic, and even dramatic love, and that’s why it is necessary to be careful and think twice before using this expression. Ai shiteru should be used with that person you want to spend the rest of your life with, and only in very specific moments.

Suki (好き) means “to like.” And this word is used to indicate that you like something or someone. But, as you already know, Japanese people are not as expressive with words as people from other countries, and that’s why suki is the most used word to say “I love you” in Japanese. But you have to keep in mind that its meaning will depend on the context (remember, “kuuki wo yomu!”).

For that reason, you don’t have to run away if someone says “Anata ga suki desu (あなたが好きです)” during your first encounter. It doesn’t mean that your date has fallen deeply in love with you and wants to get married and have babies. In this case, the meaning will be “I like you.” On the other hand, if you are in a long-term relationship and your partner says suki desu, then it means “I love you.”

Daisuki (大好 き) is quite similar to suki. If you pay attention, you will see that the way of writing these two sentences is practically the same: 大好き (daisuki) and 好き (suki). The only difference is that daisuki adds the kanji 大, which has the meaning of “big.” So, if suki was “like” and dai means “great,” what do we have? “Big love,” or rather, ” to like a lot.”

Daisuki, like suki, can be used with things as well as with people or animals, but in this case, the feeling of “liking” is stronger. In a relationship, daisuki can be translated as “I love you,” “I like you very much,” or “I love you a lot,” and always keeping in mind the situation.

“I love you” in different Japanese dialects

As with many languages, there are several Japanese dialects and accents throughout the country. There are some dialects so different that even Japanese people from other prefectures can’t understand them! But generally, most dialects do not differ greatly from the standard (the one used in Tokyo) and simply change a few words or intonations.

Therefore, you may have heard different ways of saying “I love you” in Japanese, depending on the region. For example, if you are in Tokyo, you will hear suki dayo (好きだよ), but someone from Kansai (関西) is likely to confess their love to you with a suki yanen! (好きやねん). When a Japanese person from the cooler Hokkaido (北海道) gets romantic with a partner, will say namara suki dabesa (なまら好きだべさ). But in the tropical islands of Okinawa (沖縄), the most common is deeji suki saa (でーじ好きさぁ). As you can see, although there are some differences between these examples, they all use suki. So you should not worry when you want to say, “I love you.” If you use suki desu, any Japanese person will understand you.

Romantic phrases: The magic of love in Japanese

Obviously, love doesn’t come suddenly. Before saying, “I love you,” you will have to go through different stages or situations until you are ready for the big moment.

Have you ever fallen in love when you first meet someone? In Japanese, it is said hitomebore suru (一目惚れする) and is the equivalent of  “love at first sight.” And if you are the kind of person that falls in love easily, Japanese people will say that you are horeppoi (惚れっぽい).

When you meet someone, and you want to keep in touch and want to know more about that person, you can express that feeling by saying “I’m interested in you,” in Japanese, kyoumi ga aru (興味がある).

If your interest in that person grows, there may come a time when you feel butterflies in your stomach. But the expression that a Japanese person would use in that situation has nothing to do with these beautiful insects. In that case, a Japanese person who experiences heart-pounding sensations can express it with the onomatopoeia mune ga doki doki suru (胸がドキドキする), which literally means that the heart is beating fast inside the chest.

And when you least expect it, you’ve been hitting by Cupid’s arrow. Falling in love with someone is koi ni ochiru (恋に落ちる). You can confess your feelings using the past form and adding the name of the lucky person: [name] to koi ni ochitta (と恋に落ちった), which means “I fell in love with you.”

Tip: In Japanese, personal pronouns (I, you, he, she…) are usually omitted. Another way to address a person is by saying their name.

There’s no going back, you are already in love, and in Japanese, you can announce it with koi ni suru (恋にする). If you are a true romantic, you can also say [name] ni muchuu (に夢中), which means you are head over heels in love. Or you can use [name] ni kubittake (に首ったけ) to express that you are nuts about that person.

With all these romantic phrases, I’m sure that you have already won the heart of your loved one. So it only remains to kneel on the ground and say: kekkon shite kudasai (結婚してください), in English, “Will you marry me?”

Japanese phrases to use when love is over

Sometimes things don’t go well, and most of us have suffered heartbreak at some point in our lives. This lovesickness is called koi wazurai (恋煩い). Or it may be the case that you fall in love with a person, but that person does not feel the same. This one-side love is kataomoi shiteru (片想いしてる).

When a relationship is over, and a couple breaks up, it is expressed with the verb wakareru (別 れる), which in English means “to separate.” When a relationship ends in divorce, or in Japanese, rikon suru (離婚 する). If you are the one who dumped the other person, you can say [name] wo futta (を振った). On the other hand, if what you want is to express that you have been dumped, you will have to say furaretta (振られた). In this case, if you are heartbroken, you can express it with shituren shita (失恋した). Or to put it more dramatically, you can also use onomatopoeia to say that your heart has been broken into a thousand pieces: kokoro ga zutazuta (心がズタズタ). Japanese people love onomatopoeia!

And if you have had many love failures and have been jumping from relationship to relationship, then you will be called koi ooki hito (恋多き人), literally “person of many romances.”

But don’t worry if you haven’t found your soulmate yet. There is a Japanese tale called ‘Unmei no akai ito‘ (運命の赤い糸) or ‘Red thread of fate”. According to this legend, those that are predestined to meet are linked by an invisible red thread tied to the little finger. This thread will help to meet that person regardless of time, place, or circumstances.