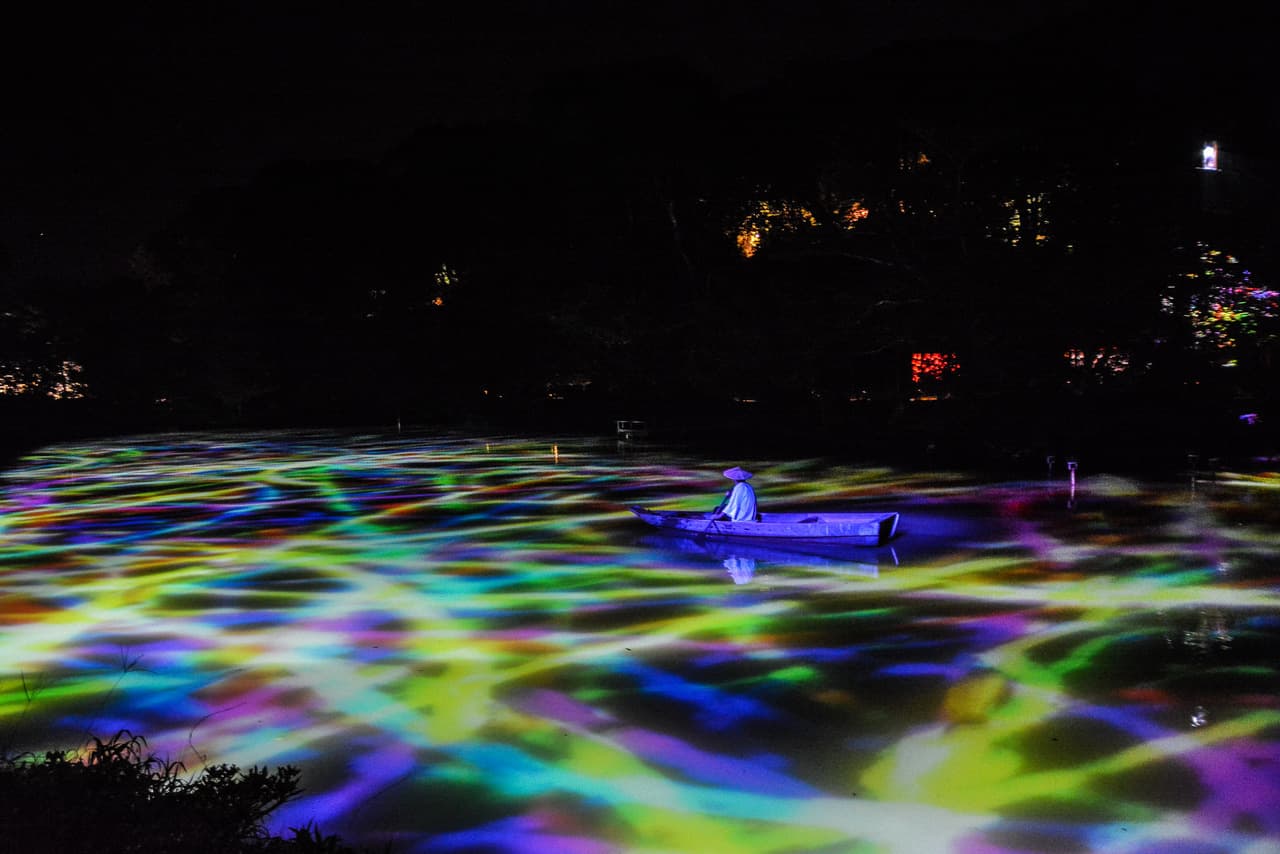 The Artistic illuminated Exhibition by Teamlab at the Mifuneyama Rakuen, Saga

Let’s take a look at the Mifuneyama Rakuen garden, a 500,000 square meter garden located in Takeo Onsen in Saga Prefecture, Kyushu. During the entire summer season and mid-autumn until October 9, Takeo Onsen invites the Japanese team Teamlab to create an illuminated exhibition in the garden itself, “a forest where gods live“. The exhibit features Digital art that highlights the nature of the famous garden!

Created by Loard Hideyoshi Nabeshima in 1845, this Japanese garden is immense and features multitudes of trails that allow you to walk for hours. This garden has a beautiful pond, a tea house, more than 500 Buddha statues, and especially the charming mountain ‘Mifune-Yama’ in the background, a charismatic mountain of 200 meters!

If you pass through the Saga area during your trip to Japan, it would definitely be a highlight to your journey to stop by. The garden attracts many visitors thanks to its spectacular change of colors throughout the year. Indeed, the garden has more than 5000 cherry trees, 50 000 azaleas, centenary maples, hydrangeas, and more. 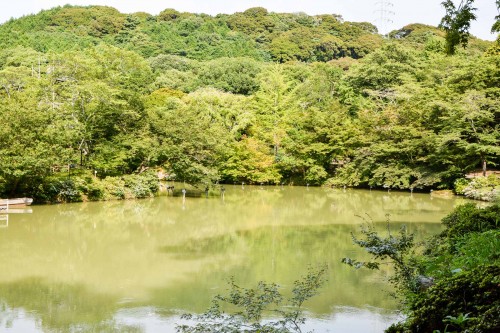 Which season is the best?

Each season hosts its own spectacular beauty at Mifuneyama Rakuen:

During the cherry blossoms season in April, the 5000 trees offer up pink hues, bathing the garden in delicate pink petals.

While during the azaleas season during mid-April-early May, the colours range from pink to mauve or pink fuchsia.

In summer, the whole garden becomes lush green. It is at this moment that the city organizes this artistic spectacle on a large scale.

In autumn, the autumn colours give this garden a vibrant bright red atmosphere for the happiness of the tourists. 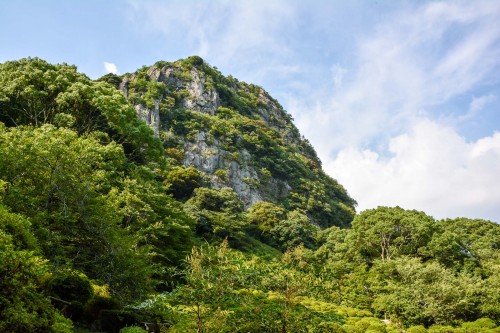 When the Japanese Collective’ Teamlab’ Highlights the Beauty of Nature

The Exhibition “a Forest Where Gods Live”

Throughout the Mifuneyama Rakuen garden, Teamlab has designed fourteen deeply immersive and sensitive digital installations inviting the viewer to explore all parts of the garden.

14 Facilities Transform the Park into An Impressive Open-air Museum

I really liked all the artistic works of the garden because the Japanese collective really wanted to sublimate nature and pose a question about the relationship between human and nature. The installations come from digital art and always use light to create impressive effects each time and in constant harmony with nature: the pool, the rocks, the cave, the trees …

As soon as night falls, the magic begins. Visitors are invited to stroll through the garden and discover Teamlab‘s visual, sonic and colorful installations for their work “A Forest Where Gods Live” in collaboration with Shiseido.

The walk begins with the pond of Mifuneyama Rakuen, where a small boat is on the water. Little by little, digital carps move on the surface of the water. They become a  visual performance lasting over 11 minutes, brushes of various colors leave behind a multicolored water surface. 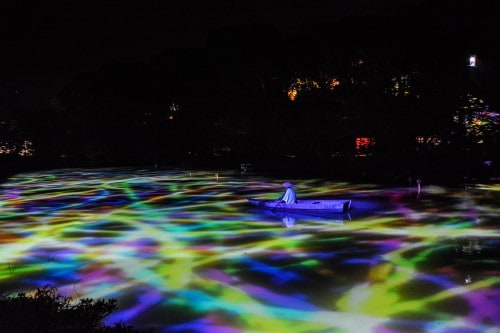 I am not going to tell you all the works, because I want to leave some of the surprise of the exhibition intact, and I don’t want to spoil the magic; but know that each work is as beautiful, playful and sensitive as the previous one. 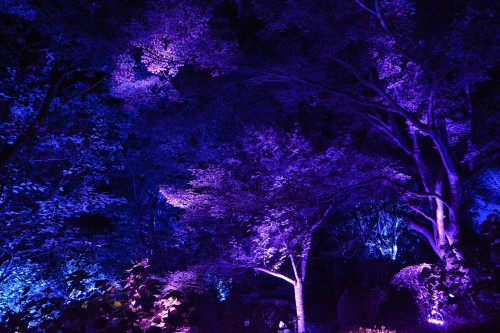 “WASO tea house” is magical: digital flowers bloom inside a teacup !!! As incredible as it may seem, as the liquid is poured, the flora emerges from the interior evolving into a state of endless growth. 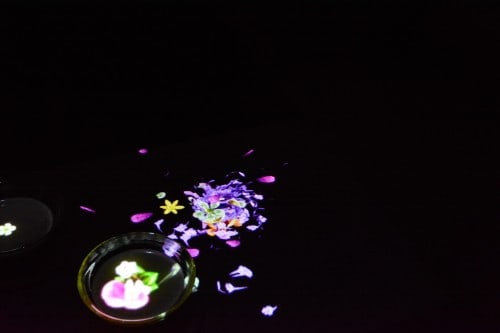 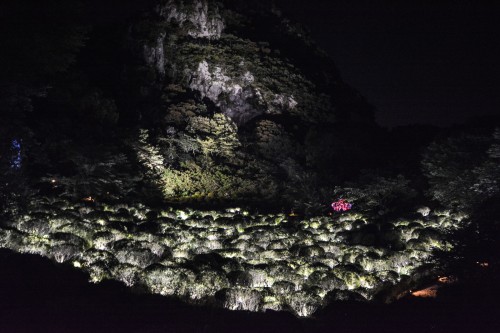 On this beautiful rock formation are projected pink, violet, red and sometimes even yellow flowers that grow, are born, bloom, fade in an endless cycle. 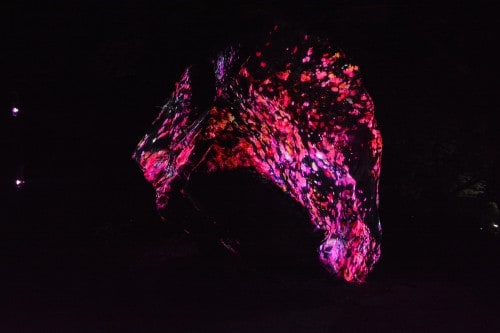 This natural arrangement of subtly lit stone seems to “breathe” when the visitor comes closer. 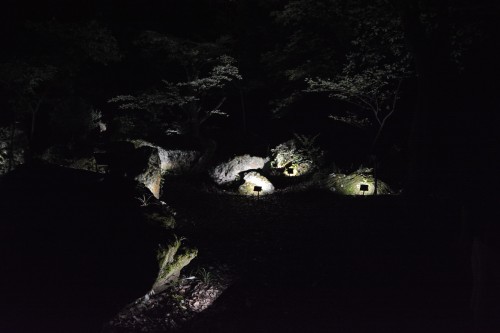 ” Sea of Rocks of Oblivion”

This stone is projected the image of ensō, the zen practice consisting of drawing a circle with a single stroke of the brush, releasing the mind to let the body create. 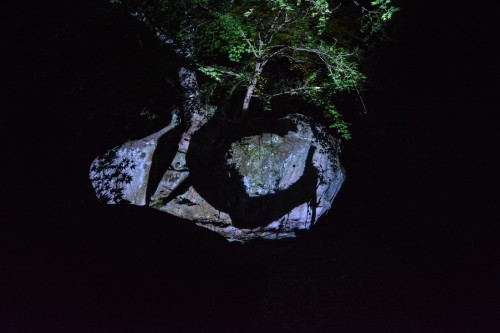 To reach this pretty mysterious waterfall, you have to take a narrow path. The digital cascade is projected onto a huge divine stone (inari daimyojin). The movement of the water changes according to how it behaves when it touches or come into contact with the stone. 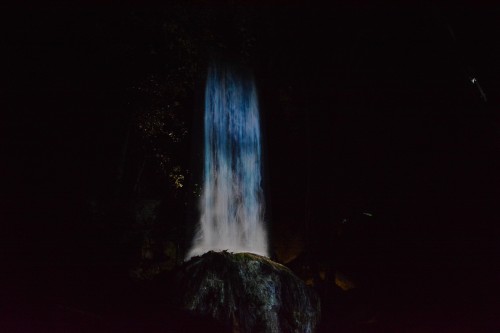 ” Universe of Water Particles on a Sacred Rock” 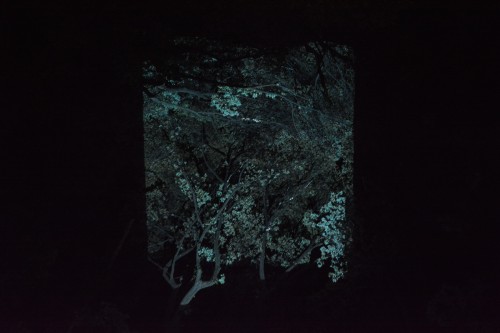 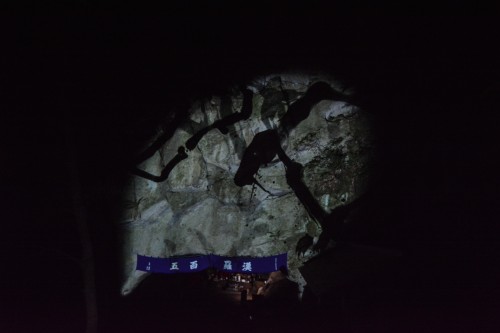 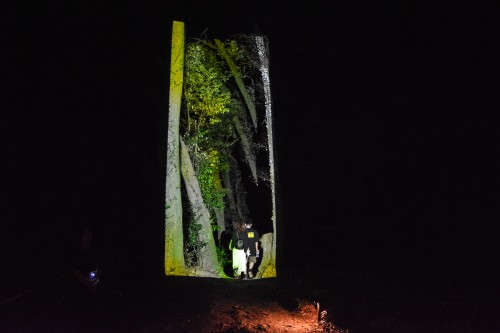 At the end of the route, we find ourselves in the ruins of an old bath house. Make the effort to sit down to draw and color the drawings in the shape of flowers, frogs, butterflies, crocodiles made available by the collective. You will see what happens next in the next room …  it’s magical !!!! 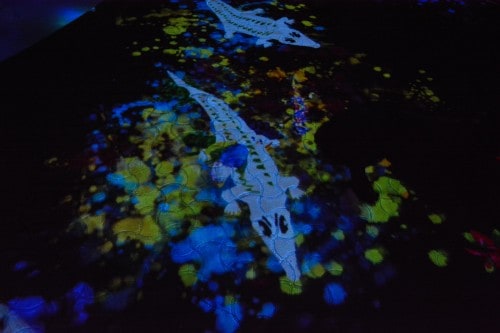 ” Graffiti Nature – Living in the Ruins of a Bathhouse”

This exhibition is really worth a look. The visitor is truly immersed in a magical world where they can interact with their surroundings!

A Must Do When You Come to Takeo Onsen!

General Information about the Exhibition “A forest where Gods Live”

The official site of Mifuneyama Rakuen

How to get to Mifuneyama Rakuen Garden?