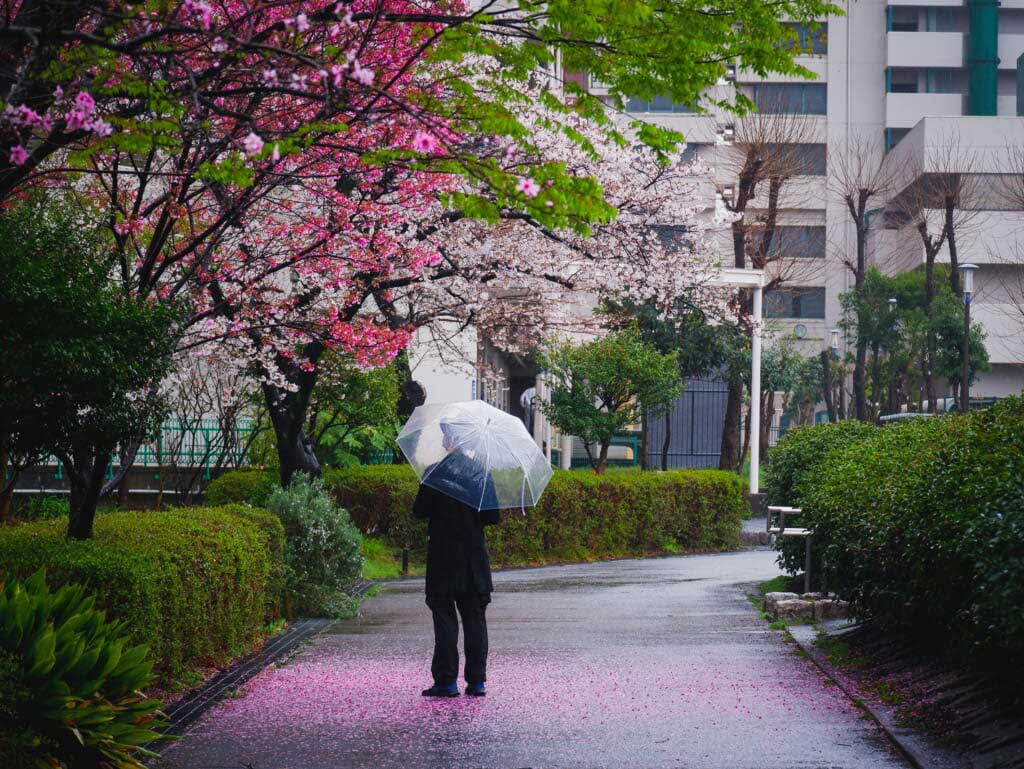 What is the climate like in Japan? What temperatures should you expect when traveling in different seasons? And what is the best time of the year to visit the Land of the Rising Sun? Today we bring you a short guide to navigating the different seasons of Japan and when the best time to visit. In Japan, each season is unique and has well-defined characteristics that will give you a fresh perspective of the country’s various charms.

What are the different climates in Japan?

The climate in Japan varies according to the area, so in addition to seasonal differences, we also have to consider the country’s range of latitudes. The Japanese archipelago spans more than 3,000 km latitudinally, so the temperature fluctuates significantly between the northern and southern regions located in different climate zones.

The northern region of Hokkaido is in a subarctic climatic zone (often influenced by Siberian winds), characterized by particularly harsh winters and sustained snowfall. On the other hand, regions such as Kyushu and Okinawa are in a subtropical zone, marked by a warm climate, mild winters, and scattered rainfall. Finally, the central part of the country has a temperate climate.

What are the four seasons in Japan?

As we’ve just seen, the Japanese climate produces rather diverse seasons, with cold winters, hot, humid summers, and two intermediate phases marked by mild weather. So while certain times of the year may make traveling a bit more challenging, each season allows you to take in different aspects of this beautiful country.

The most loved season is undoubtedly spring, one of the best times to visit Japan. With spring comes the start of Japanese school and the fiscal year, a new beginning marked by the blossoming of the cherry trees. The phenomenon usually occurs between mid-March and early April (but these dates vary depending on the area), when many Japanese gather under the blooming trees for hanami, spreading picnics where participants enjoy the sakura blossoms.

Overall, this time of the year has weather ideal for traveling. Despite the fluctuating temperatures, it’s never too cold or too hot. Spring is also comparatively less rainy than other seasons.

From mid-June to mid-July is the rainy season, a period characterized by frequent rainfall that slowly leads into summer. Summer in Japan comes with hot and muggy weather, with high humidity levels (with peaks of 95%) that can undoubtedly discourage some visitors. It would be best if you also kept in mind that this is the rainiest season of the year.

Summer is the most ambitious time of the year to visit the country, not only because of the sweltering heat but also because of the frequent typhoons, which occur primarily between August and September. However, this season is also great to attend some fantastic matsuri summer festivals. With their vibrant colors, traditional dances, and street food stalls, these Japanese festivals make summer a delightful time to visit.

Autumn is another beautiful time to visit Japan, thanks to its mild weather and relatively stable temperatures of around 15°C. In November, Japan becomes tinged with the beautiful colors of fall. This is the ideal time to admire foliage in all its nuances, from the golden yellow of ginkgo Biloba trees to the fiery red of maples.

Winter in Japan begins from about the end of November, slowly making its way from the northeast to the country’s southwest. Average temperatures range from 2°C to 10°C, and the weather is dry with frequent beautiful, clear sunny days, making it an excellent time to travel, especially in central areas.

Of course, in the northern alpine regions and Hokkaido, the situation is slightly different — temperatures drop several degrees below zero, and heavy snowfalls are relatively common.

What are the microseasons in the old Japanese calendar?

In Japan, the passing of seasons is significant both from a climatic point of view and culturally. As you travel around the country, you’ll notice the importance of seasonal changes.

This originates in the old days of agricultural Japan when people had to pay close attention to the seasons and the slightest climatic change. This awareness is still noticeable today in many aspects of daily life, such as in Japanese cuisine and the abundance of dishes deeply connected to its ingredients’ seasonality, product packaging, and even advertising.

Under the ancient agricultural calendar, linked to lunar and solar movements, Japan’s seasons are not just four but many more, each denoting a particular time in nature’s cycle. In fact, according to the old calendar, the year is divided into 24 parts (節気 sekki), also called “solar terms,” which signify the progression of time and the seasons. Back in the day, this allowed people to know how far along the season they were at any time. Thus, while many western cultures are mostly familiar with four basic positions of the sun — specifically the equinoxes and solstices marking the beginning of the four seasons — Japan and China acknowledge a series of more frequent astronomical events, following one another every 15 days with 24 well-defined seasons.

Moreover, each sekki is further divided into three other phases, succeeding each other approximately every five days, giving rise to a calendar of 72 micro-seasons. All are very short and fully describe the delicate and almost imperceptible changes in nature constantly occurring around us. This kind of structure allowed the Japanese to appreciate the main features of the four seasons and those tiny transformations accompanying each season’s passing throughout the year.

Perhaps not everyone knows that Japan’s 72 micro-seasons also have a dedicated app, allowing you to experience the fascinating world of Japan’s traditional calendar firsthand. The 72 Seasons app, for Android and iOS, is by the Utsukushii Kurashikata Institute (Beautiful Living Research Lab), which has collected materials related to the ancient calendar, such as illustrations, haiku, and photos. The app introduces a series of trivia related to the small changes in nature while providing a complete calendar, including the 72 seasons and one for each sekki. In “Today’s season,” you can browse a detailed explanation of the sekki we are in, with many fascinating reference points. For example, there’s a season when “the insects awaken,” one for “the planting of rice,” and even one when “the earth hardens” ー many small and imperceptible changes that mark the Japanese year.

In conclusion, what is the best season to visit Japan? As we’ve seen, the climate in Japan is generally temperate, allowing you to travel any time of the year. Each Japanese season has its own peculiarities and can provide surprises and landscapes. From the beautiful spring blossoms to the warm fall colors, to the snowy villages in the mountains and the energy of the summer matsuri: all you have to do is choose which side of Japan you’d like to explore and dive right into the heart of Japanese culture.